Turning Blight into Amenity: Embracing the City in Urban Landscapes

Embracing the city by transforming industrial blight into urban amenity 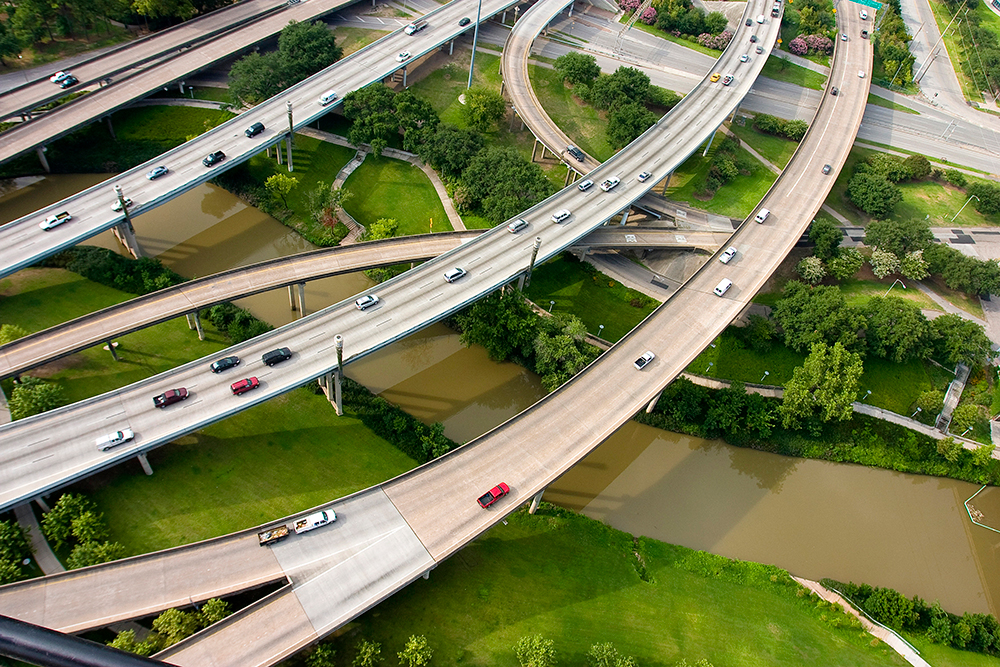 Ever since I took a boat ride last summer down Newark’s Passaic River, I’ve been thinking about the relationship between the man-made world and the natural environment. After an afternoon spent marveling at the undersides of the New Jersey Turnpike and the Pulaski Skyway, as one might gaze at old stone bridges over more bucolic rivers, Newark’s chief urban designer, Damon Rich, said to me: “I would say we have a truly metropolitan version of nature, at least in this part of  New Jersey.”

A metropolitan version of nature: I liked that idea and it’s stuck with me. Urban nature isn’t a phenomenon unique to the twenty-first century, but as city supermarkets add rooftop farms and downtown hotels incorporate bee colonies, the distinctions between urban and rural have become somewhat blurred. Sure, there have been lots of planned encounters between city and country in the past. Most notably, there was Central Park designer Frederick Law Olmsted’s vision of the city park as a pastoral retreat: “We want a ground to which people may easily go after their day’s work is done,” he wrote in an 1870 essay, Public Parks and the Enlargement of  Towns, “and where they may stroll for an hour, seeing, hearing, and feeling nothing of the bustle and jar of the streets, where they shall, in effect, ﬁnd the city put far away from them.”

What’s happening today is different. Twenty-ﬁrst century metropolitan nature is about embracing the city, not ﬂeeing it. “Central Park was meant to be an escape,” says Robert Hammond, one of the activists who conjured the High Line into being. “On the High Line, you’re in nature, but you can hear the trafﬁc; you can see the Empire State Building.”

This is the aspect of the High Line that’s most worth emulating. Every city doesn’t need an elevated linear park, nor should every old railroad viaduct be converted for recreational use. But there are features of our cities that we commonly regard as eyesores that should instead be valued as part of our unnatural natural environment. We can ﬁnd ways to immerse ourselves in these oddities as if they were the uncanny rock formations of some southwestern canyon. Even the most obstructive, no-man’s-land-generating form of urban infrastructure—the elevated expressway—can, with skill and imagination, be incorporated into metropolitan nature. 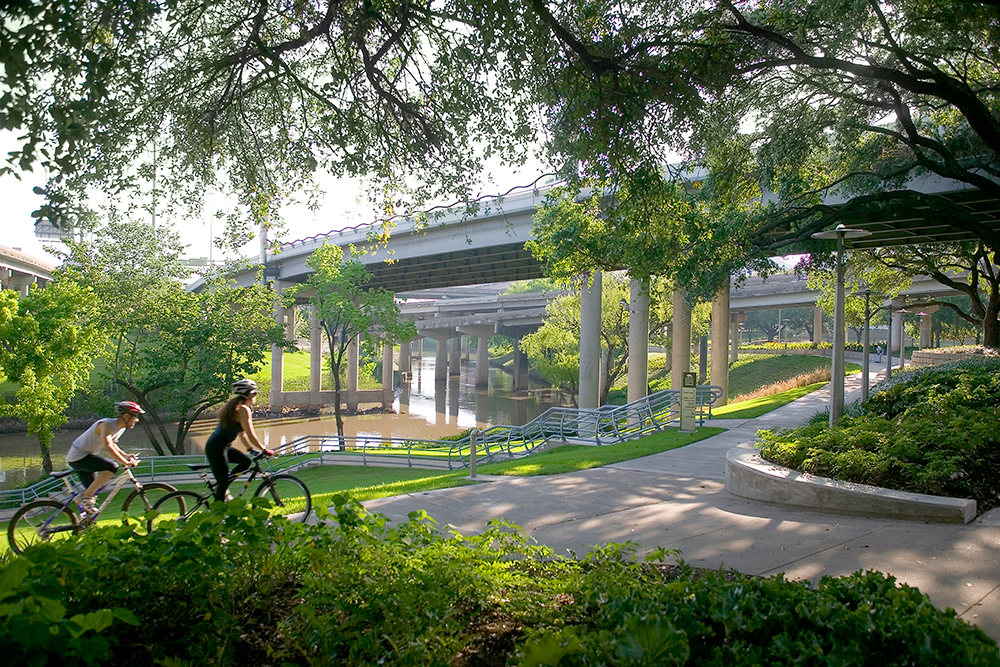 The natural channel and the soil along the bayou were stabilized by gabions and the anchoring of 14,000 tons of rock and recycled concrete.

Perhaps the best example of this trick turns up in Houston. The photos I’ve seen of that city’s Buffalo Bayou Promenade show a network of bike and pedestrian trails running alongside a river (long regarded as a dumping ground) beneath a spaghetti weave of highway overpasses and interchanges. The images make the concrete columns supporting the highways look strangely elegant, like a futuristic colonnade.

Buffalo Bayou (a river to us Northerners) is the main reason Houston’s founders built a city on a swampy inland site. They had sailed up the bayou as far as they could go, and planted a settlement on the spot where they were forced to stop. According to Kevin Shanley, the CEO of SWA Group, the landscape design ﬁrm that masterminded the revival of the Buffalo Bayou, the city grew up around this little port, positioning sawmills along the river to take advantage of the cypress trees growing on its banks. “That’s where they got their drinking water,” Shanley says. “Of course that’s where they dumped all their sewage. That’s where the slaughterhouses were and all the offal was dumped there.”

Floods eventually ﬂattened much of the riverfront development. While early attempts had been made to set aside the land alongside Buffalo Bayou for a city park, the postwar highway-building boom overwhelmed good intentions. The riverfront provided an open space in which new roadways could be easily inserted. “And so they clobbered the poor bayou with freeway overpasses and interchanges,” Shanley says. Since the 1980s, citizen groups have emerged and tried to clean up the bayou and turn the area around the historic riverfront landing into a park. That effort spawned a linear stretch of green, scheduled for completion next year, which has become a beloved conduit for bikers and pedestrians. The trails along the bayou will eventually be the centerpiece of a 150-mile, $200 million network of trails along the city’s various bayous, which most Houstonians had been accustomed to thinking of as drainage ditches. “People are realizing that we don’t have inﬁnite amounts of money for infrastructure and we don’t have inﬁnite amounts of land in these urban areas, so you’ve got to be creative about ﬁnding joint uses,” Shanley says. 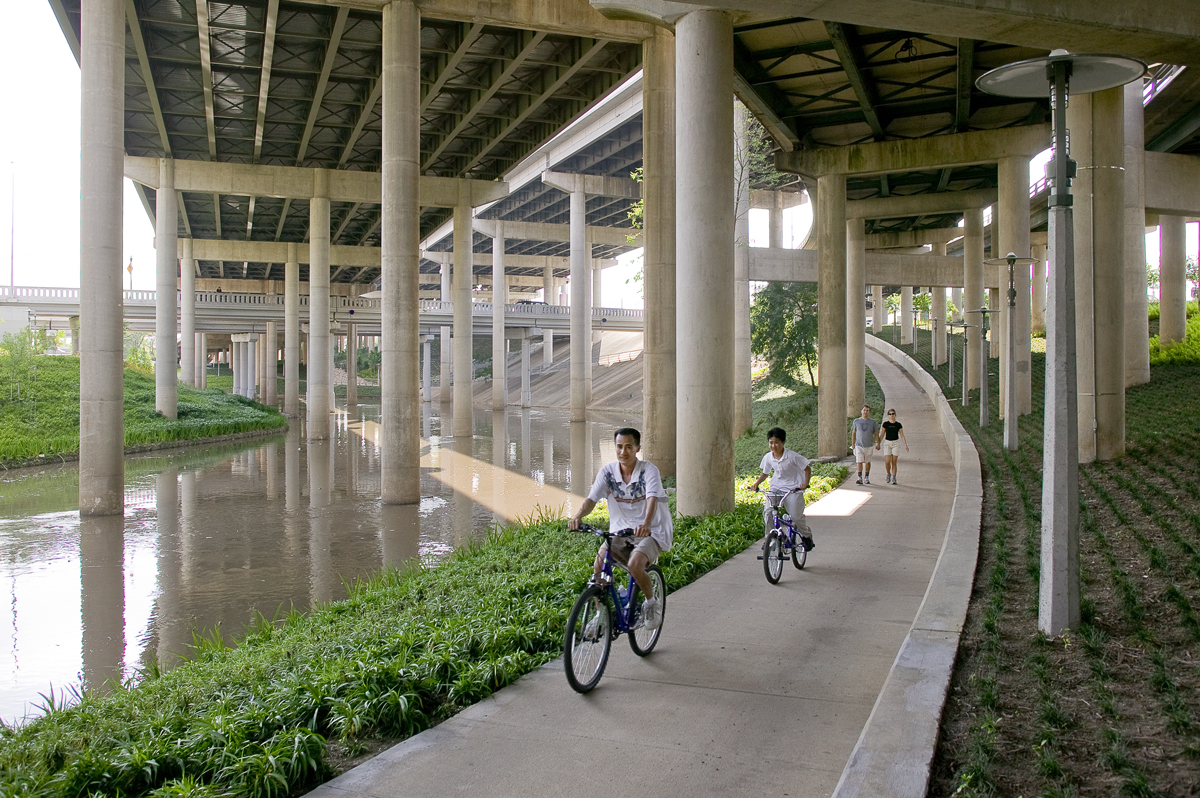 I’m drawn to the photos of Buffalo Bayou because it so deftly reclaims a landscape dominated by highways. And I’m impressed that this growing network of foot and bike trails is in Texas—and not in free-spirited Austin, but Houston, the city that grew rich on petrochemicals, practically deﬁning sprawl with its 600-square-mile span.

Similar transformations of eyesores into amenities are happening in cities all over the country, including the ongoing restoration of the Los Angeles River (since the 1930s, a concrete conduit for much of its 52-mile length), and the reinvention of New York City’s monumental Fresh Kills Landﬁll into a 2,200-acre park. But I’m most fascinated by the taming of harsh neighborhood cleavings created by overhead roadways and rail lines. Here in New York City, the Design Trust for Public Space is working on a project called Under the Elevated, in which an interdisciplinary team has spent months exploring new uses for the city’s 700 miles of space beneath a variety of elevated highways, subway lines, and bridges.

Some of the sites being considered for reuse include the underside of the Gowanus Expressway, a six-mile-long Robert Moses–era viaduct that cuts South Brooklyn in two; the underbelly of the Manhattan Bridge in Chinatown; and the space beneath the soaring Washington Bridge (not to be confused with the George Washington Bridge), which crosses the Harlem River at 181st Street. Each of these B-sides has largely unrealized potential and beauty that has long gone unrecognized.

The interactive art installation Silent Lights was installed directly beneath the BQE in December. The project was commissioned by NYC DOT in an effort to find creative uses for the undercroft spaces of New York’s infrastructure.

The Design Trust’s team has been working closely with community organizations and the city’s Department of Transportation (DOT) to arrive at permanent transformations, but those have yet to be ﬁnalized. In the meantime, the DOT has been staging a series of pop-up installations including Silent Lights, a group of illuminated archways beneath the Brooklyn Queens Expressway (BQE) near the Brooklyn Navy Yard. Designed by Urban Matter, Inc., the arches translate the relentless noise from the highway above into patterns of colored light, creating a somewhat more pleasant experience for pedestrians. The installation is an encouraging ﬁrst step. This month’s pop-up, another lighting installation, can be found beneath the Manhattan Bridge at Division Street in Chinatown. But the most signiﬁcant aspect of the Under the Elevated project is not any particular installation, but the Design Trust’s work on a procedure that might make it easier for artists and community groups to gain ofﬁcial access to these disused sites, which tend to be controlled by a daunting patchwork of city and state agencies. (For example, the pavement beneath the BQE is controlled by the DOT, but the overhead structure is maintained by the state of New York.) Establishing such a mechanism will make it easier to transform the undersides of our most imposing hunks of infrastructure into places that won’t ﬁt the Olmstedian vision of an urban park, but might exemplify the twenty-first-century idea of metropolitan nature.

Houston and New York City are polar opposites when it comes to things like development patterns and zoning (or the lack thereof), but the Buffalo Bayou and the Under the Elevated projects are kindred expressions of a common realization. “It’s this discovery of tremendous value out of land that’s right in our face but we don’t see it,” Shanley says. New York’s Design Trust executive director Susan Chin makes the same point: “I think now, as cities are growing, we can’t afford to waste any of our real estate anymore. We see everything as having some value.”