Though I edited the magazine Healthcare Design for eight years, and wrote and commented upon dozens of projects, I’ve seldom visited them personally to see what they really look like and how well they work. An exciting exception occurred this past October, when on a trip to Las Vegas I visited the Frank Gehry-designed Lou […]

Though I edited the magazine Healthcare Design for eight years, and wrote and commented upon dozens of projects, I’ve seldom visited them personally to see what they really look like and how well they work. An exciting exception occurred this past October, when on a trip to Las Vegas I visited the Frank Gehry-designed Lou Ruvo Center for Brain Health.

To say that the Center, which opened this spring, is controversial is putting it mildly. Though it’s gained its share of praise from professional architecture critics, who have called it Gehry’s most impressive work since the Disney Concert Hall in Los Angeles, other observers have said that it resembles a cake melting in the sun or a building falling down. Still others have seen a fitting metaphor for brain disease and disorders, particularly Alzheimer’s disease, with the image of a collapsing cerebellum.

Gehry himself has disavowed any such representational symbolism. He is famously an architect who “thinks with his hands,” creating almost free-form models translated via an ingenious computer program into virtual but buildable plans. Gehry did tell me, when I researched the article, that he had Lou Ruvo, the project sponsor’s father and Alzheimer’s victim, in mind as he conceptualized the Center, and I have to say that looking at it with this in mind is indeed a moving experience. 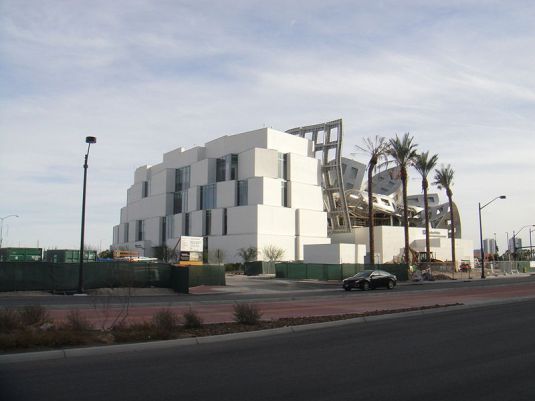 But photography is its own language—what does the building actually look like on the ground? And how well does it work in its primary mission: evaluating patients with brain disease, particularly Alzheimer’s and Huntington’s, and new medications for their treatment?

Alighting from a taxicab in a sweeping commercial district of northern Las Vegas, with the colossal World Market Center looming next door, I was struck at first glance by more a sense of intrigue than of shock. The weirdly curvaceous exterior wrapped in stainless steel shingles really does form the building envelope for the large public space called the Activities Center. But it also presents as a sculptural trellis for the more traditionally designed clinical/administrative portion of the building attached. Because of this and the generous-sized windows Gehry has provided the clinical building, the examining rooms, offices and waiting areas offer sweeping views of not only the surrounding properties (largely undeveloped lots right now), but of the intricate trellis structure itself—an attraction for structural engineering buffs like me, whatever staff may think of it.

The spacious Activities Center underneath the apparently collapsing dome has gained the main architectural attention, and it is indeed full of surprises. For one thing, it has unexpectedly sensitive acoustics for a space 75 feet high, which is the result of the Swiss-made acoustical coating called BASWAPhon. Because of the room’s wraparound design, the walls, by and large, are in easy reach of human hands and leaning shoulders—and I’m told that this could be a problem. It turns out that the surface is sensitive to touch and requires re-patching for acoustical integrity. Although a wooden floor margin and baseboard have been installed around the room’s circumference to discourage touching, whether this will suffice is questionable. The Center’s staff report no problems so far. 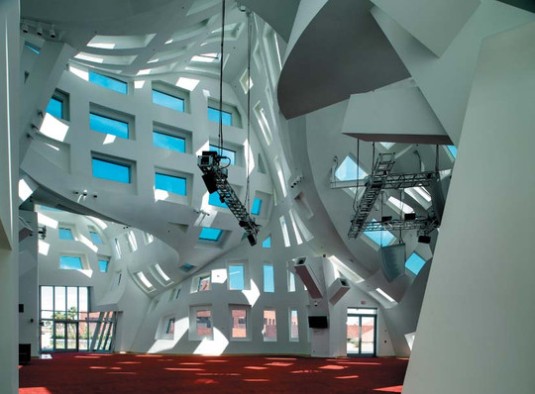 Another surprise is the sheer abundance of natural light pouring through the 199 individually shaped windows surrounding the Activities Room, so much so that MechoShades have been installed in many of them to automatically modify the glaring Las Vegas sun during the day. Once darkness falls, however, the space can be transformed through the selection of dozens of color options for lighting, a palette of various blues, greens, yellows and reds to accommodate everything from professional conferences to patient education sessions to wedding receptions.

The Activities Room is also impressive for the way that HVAC, electrical and water infrastructure is expressed in jutting-out support sections imaginatively called Wisdom Trees. It’s strictly conventional structural engineering, Gehry says, but nevertheless an attractive solution. Gratifying, too, is the fact that the ceiling remains dry and unstained, despite serious Las Vegas rainfalls and what had to be a gargantuan roofing job. The stainless steel shingles are affixed from the inside of the Activities Room to maintain a smooth, untrammeled exterior, but the openings had to be carefully accommodated to avoid what could have been disastrously untraceable leaks.

Among other oddities posed by the design, the generously apportioned floor-to-ceiling windows so friendly to views and natural light in the clinical/administrative will occasionally require building maintenance personnel to remove very visible dead birds from overhead wraparounds. And the openings in one particularly sculptural section of the exterior attract flocks of birds for no apparent reason. 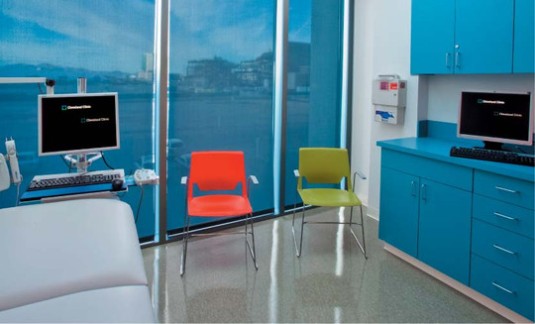 From the healthcare design standpoint—my bailiwick—I’d have to say that the clinical area falls just a tad short. Although the corridors are gently curved and relatively short, and the examining rooms have a clean efficiency about them, they are just that: examining rooms, such as you would find in virtually any healthcare facility in the nation. Though the main purpose of these rooms is patient evaluation and counseling, the chief patient population—those with cognitive impairment—might have benefitted from warmer, more welcoming surroundings. Not just the great natural views that do exist, but some color and a bit of comfortable furniture, for example. The waiting areas for family are warmly designed in this way, with stylish furniture and pleasant colors, but clinic policy is to not have patients linger in the waiting areas for fear of upsetting other patients. That’s commendable patient traffic management, but patients get the short end of the stick, design-wise.

Perhaps Frank Gehry, whose attention-getting powers are on full display in this building, hasn’t yet mastered the tenets of today’s healthcare design—in brief, providing patient-centered amenities throughout. There’s no question that he has succeeded in his main mission: to draw attention to debilitating disorders threatening to overwhelm our society in order for people to start doing something about them. That is the purpose for which sponsor Larry Ruvo and his philanthropic organization Keep Memory Alive hired him.

Richard L. Peck was founding editor-in-chief of Healthcare Design in 2001. Prior to that he established design coverage for a national long-term care magazine, Nursing Homes (now Long-Term Living), which he also edited. Its DESIGN series of annuals, starting in 1997,  has promoted patient-friendly design and planning of long-term care facilities, and continues to do so. Peck, now semi-retired, continues to write for Heathcare Design, Healthcare Building Ideas, Long-Term Living and a senior care blog on the facilities search web site SnapForSeniors.com. His email is [email protected].