An exhibition at Boston’s ICA presents the shiny, curvy work of Anish Kapoor.

This weekend, I had the pleasure of catching the tail end of London-based artist Anish Kapoor’s exhibition, Past, Present, Future, curated by Nicholas Baume at Boston’s Institute of Contemporary Art. Manageably sized and well selected, the 14 sculptures on display compose the first U.S. museum survey of Kapoor’s work in over fifteen years. Kapoor is best known to Americans for his 2004 Cloud Gate in Chicago’s Millenium Park, now affectionately nicknamed “The Bean.” In Manhattan, his 2006 temporary Sky Mirror, a 35 foot-diameter concavity of polished stainless steel placed outside the Rockefeller Center, gave New Yorkers a vision of something they rarely get to see at such close range: blue sky.

A little more modest and yet no less optically illusive, the current ICA exhibit covers Kapoor’s work since 1980. And yet, for the relatively consistent treatment of material, scale, and modernist abstraction of these 14 pieces, it is somewhat hard to discern how thirty years has made a difference in Kapoor’s dialectic sensibilities. With the exception of his earliest works, both titled 1000 Names (1979-80), Kapoor favors working with highly polished materials in deceptive, teasing forms.

The two 1000 Names recall Kapoor’s background of Indian and Jewish-Iraqi descent. They are powdery piles of dry pigment that hint at primitive forms and sacred spaces, but whose highly saturate reds and yellows betray their modern context. Kapoor has openly discussed his red pigment as a referring to Hindu tradition, but in conversation with curator Nicholas Baume in his new monograph, Kapoor emphasizes multilayered interpretation over “overtly readable symbols.” Above symbolism, he values “iconic readability,” or “proto-form.” Proto-form, he explains, is a kind of architectonic ambiguity. He describes the Jantar Mantar observatories, built in 1730 by a Rajasthani king, as one such timeless prototype: “There are staircases that just go up to the sky. They are for observing the stars, but they don’t lead to anything.”

Kapoor’s newer twelve pieces rely primarily on fiberglass, acrylic, stainless steel, and resin for material. Each piece is an optical illusion formed on the backbone of pleasure principle and every curve titillates and confuses. One notable work, Untitled (1998), showcases Kapoor at his best. A biomorphic, weightless egg of all-white acrylic rests on its side, with a light gray rectangle seared into its side. 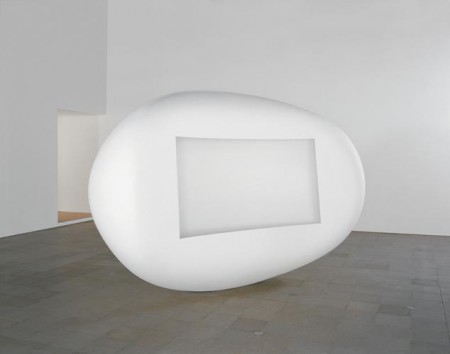 As you approach from afar, you begin to realize the gray rectangle is not painted but rather absent – it is a window cut into the hollowness of the egg. I get it, you think. Non-space. But, drawing even closer, that gray seems to take on a mysteriously thick volume, its perceptible depth seeming to extend beyond the palpable width of the egg (if you actually view the whole form from the side, which you will inevitably be forced to do.) In the ICA’s accompanying documentary, Harvard theorist Homi Bhabha describes this voluminous emptiness as Kapoor’s uncanny ability to ‘bring depth directly to its surface.’

As curator, Baume has done well to capitalize upon the oft-awkward interior of the ICA, a feat enabled by the highly interactive element in Kapoor’s work. Many of the pieces play with acoustic sensibilities as well as visual caresses. The single-room space is filled with surprising expansions of space and sound. Staring into an S-shaped curve of polished stainless steel, reminiscent of work by Richard Serra, sound is scooped from one end of the room and delivered into unexpected places. 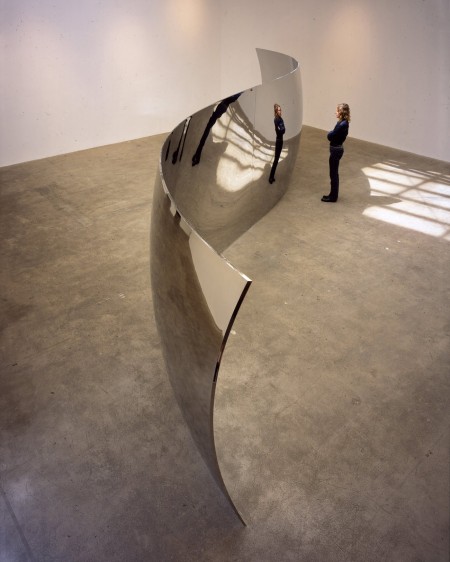 At one point, I observed a solitary man speaking into the wall. He was standing at the far end of the torque. “Can you hear me?” he whispered into the steel. “No,” came a woman’s flat reply, from a different corner in the room.

While one might say that Diller Scofidio + Renfro’s architecture turned its back on the ICA audience , sculptures by Kapoor accomplish quite the opposite. Kapoor shapes space so as to capture every impulse of his viewer, whether by fulfilling it or by subverting it. This art is made for the viewer’s engagement: we are invited to approach, to fear, to question, or to play.

Past, Present, Future is on view through September 7th.