To renovate a town house in Brooklyn, Young Projects built an extension, added green spaces, and brought sunlight into the home—all within the constraints of a modest site. 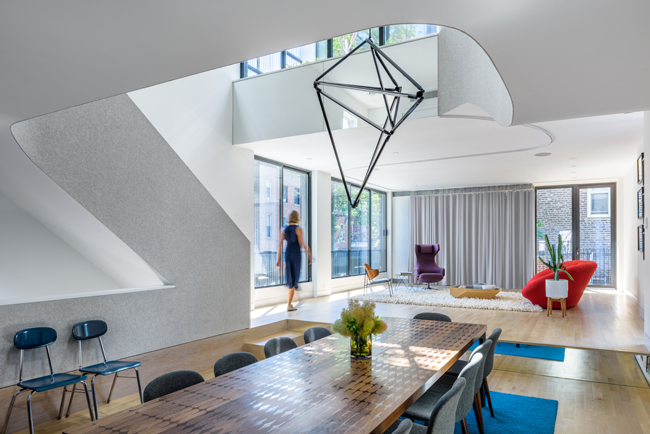 On the first floor, the dining area is within the original structure, while the living room—anchored by a Ploum Sofa from Ligne Roset and a Vitra Grand Repos chair—is made possible by the extension. Chandelier by Bec Brittain.

In 2011, when photographer Jan Cieślikiewicz bought a three story town house on the corner of Wythe Avenue and North 7th Street in Brooklyn’s Williamsburg neighborhood, he imagined tucking his studio on the ground floor. But he quickly came to realize that this would not result in the secluded, quiet workplace he wanted. The early-20th-century town house is in the crosshairs of the first L train subway stop in Brooklyn and the East River waterfront, not to mention some destination restaurants and bars, the Wythe Hotel, and a dance club.

So, rather than expand the town house from the ground level out into the empty lot behind it—a common solution seen throughout the borough—Cieślikiewicz’s architect, Bryan Young, took advantage of the available floor area ratio (FAR), plus some additional square footage (more on that later), and floated two rectangular volumes from the existing structure’s second and third floors. He left the rear lot empty for parking and cheekily obscured it from North 7th Street with chain-link fence covered in faux grass. “We began with the precarious notion of how pleasant a backyard would be on a corner lot, given 2016 Williamsburg,” says Young. (Conclusion: It wouldn’t be that pleasant.) Keeping in mind the foot traffic in the area, the architect placed a small storefront at the base of the town house, which Cieślikiewicz plans to rent out for pop-up retail.

Corrugated, perforated charcoal zinc screens the steelframed stucco addition, while the town house is daubed in the same inky color. Its haphazard fenestration pattern and steel plates are a foil for the adjacent serene zinc. Viewed from the street, old and new are clearly delineated, yet monolithic. However, one of the delights of the project is the way, as Young says, that line is “nuanced and blurred” inside.

To begin, Young, whose six-year-old firm Young Projects is based in Brooklyn, gutted the masonry-and-wood town house, which had been chopped up into three apartments and was in disrepair. Even the facade was bowed, requiring those extra steel plates—“like studs on a leather jacket,” says Young. Using some smart math, the architect and his team then scooped out around 200 square feet from the third floor of the town house, creating a dramatic stairwell that hugs the northeast wall and a double-height dining area terminating in a Corbusian skylight. That deletion—leaving a void that doesn’t count toward the FAR—allowed them to tack on more square feet to the addition. “The idea of redistributing the floor area leads to a more interesting section, integrating landscape and natural light into the center of the residence,” says Young. “I don’t know why more corner lots in Brooklyn aren’t developed with this mentality.” 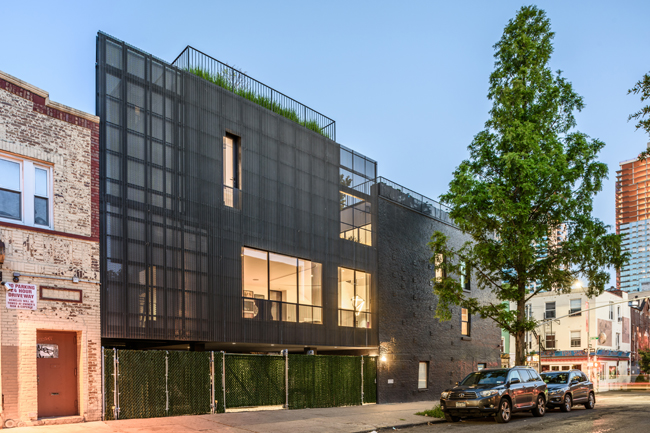 On the exterior, the difference between the old and new structures is articulated with a perforated and corrugated zinc screen from VMZinc. The house was built by Gerry O’Dowd of Advanced Buidling Contractors.

The floor heights of the town house are lower than those of the addition, which was necessary to accommodate headspace for parking and also allows for more generously scaled rooms in the addition. The architects lined the curved stair wall—which winds up to become the rail for the third-floor mezzanine—in a gray wool felt, nodding to the neighborhood’s industrial past. In a neat graphic trick, a gray felt curtain in the living room can be pulled across a curved track that echoes the curved wall, creating an intimate screening room and a visual connection between the dining and living rooms. “The spiral naturally evolved out of this shearing of the floor plates and how the addition is always several steps up,” says Mark Watanabe, an associate at Young Projects and the project architect. “It was a way to integrate that and turn this potentially weird thing into a nice element.”

Young and Watanabe placed Cieślikiewicz’s bedroom on the third floor of the existing town house and his studio on the top floor of the addition. Separating the two is a small interior courtyard designed in collaboration with Cieślikiewicz’s partner, Emily Bauer, a landscape architect. She thought of the space as a terrarium, choosing plants that thrive in the moist, shaded environment. Bauer also designed two more rooftop spaces: a freewheeling garden that sits on the addition and a hardscape terrace with marble slab pavers and angled steel planters that tops the town house.

Though there is a bluntness and simplicity to the project’s materials and finishes, its unfolding spatial complexity continually surprises. For example, a south-facing clerestory gives Bauer and Cieślikiewicz a view of the terrarium courtyard from the dining room, while the mirrored step-up to the living room reflects back into the dining area.

This “confusion of the spatial continuity” is a thread that runs through Young Projects’ portfolio. Young founded the firm in 2010 after working for Skidmore, Owings & Merrill, Architecture Research Office (ARO), and Allied Works, among others. He and his colleagues have racked up an impressive body of built work that is unique for a newer firm. The emphasis on building was deliberate, says Young, and a priority from his days at ARO and Allied Works. One of the firm’s projects, an ultra-luxurious residence and retreat under construction in the Dominican Republic, has a meandering courtyard and a roof made of 200 different scissor trusses. Its corresponding beach spa is a folly in cast-in-place colored concrete aggregate, sandblasted to appear like the inside of a geode. At a 6,000-square-foot residence in Tribeca, the core is clad in pulled plaster panels that draw upon the techniques used to make crown moldings. The office, says Young, has an interest in material research and letting aesthetics unfold through experimental making, “in contrast to architects who want to control everything through digital fabrication.”

While the Wythe town house has less focus on materiality, its provocative sections and programming align with Young’s desire to create a sense of mystery and discovery around every corner. 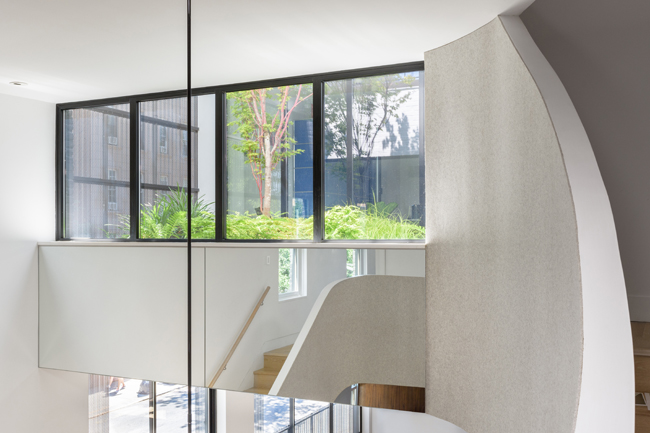 The architects manipulated the floor heights of the addition relative to the existing town house, and dropped in an interior courtyard on the third floor. 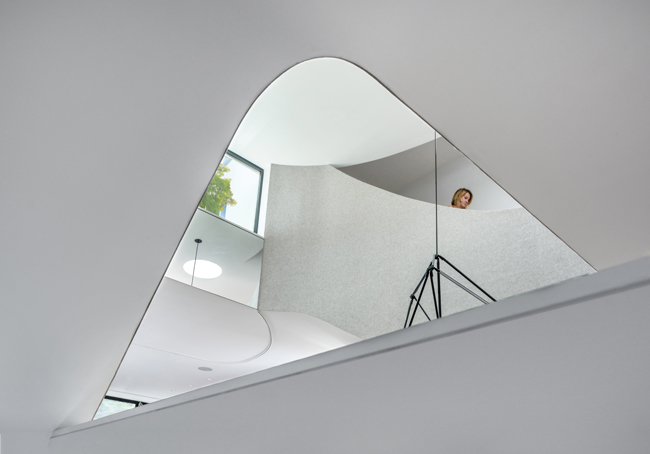 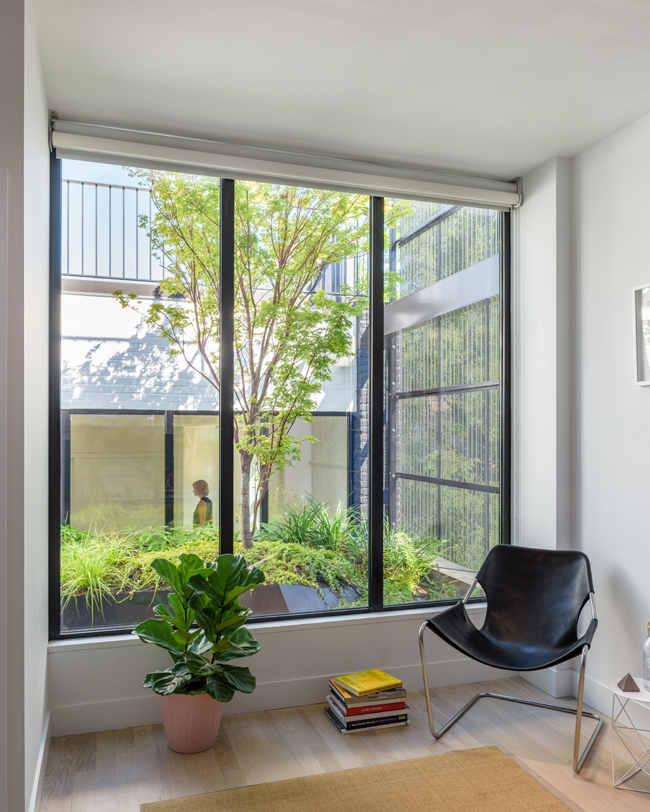 In Cieślikiewicz’s photography studio on the top floor of the addition, a conveniently located Paulistano armchair, designed by Paulo Mendes da Rocha and available through Design Within Reach, turns an area overlooking the interior courtyard into a reading nook. 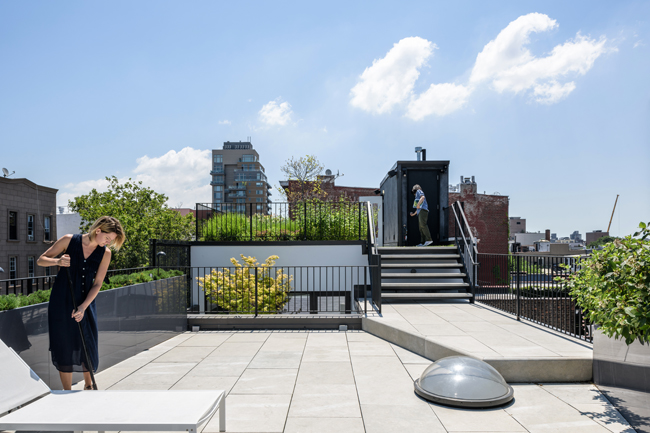 Emily Bauer (pictured), worked with Young Projects on the design of the courtyard (below) and the garden and terrace on the rooftop (above). 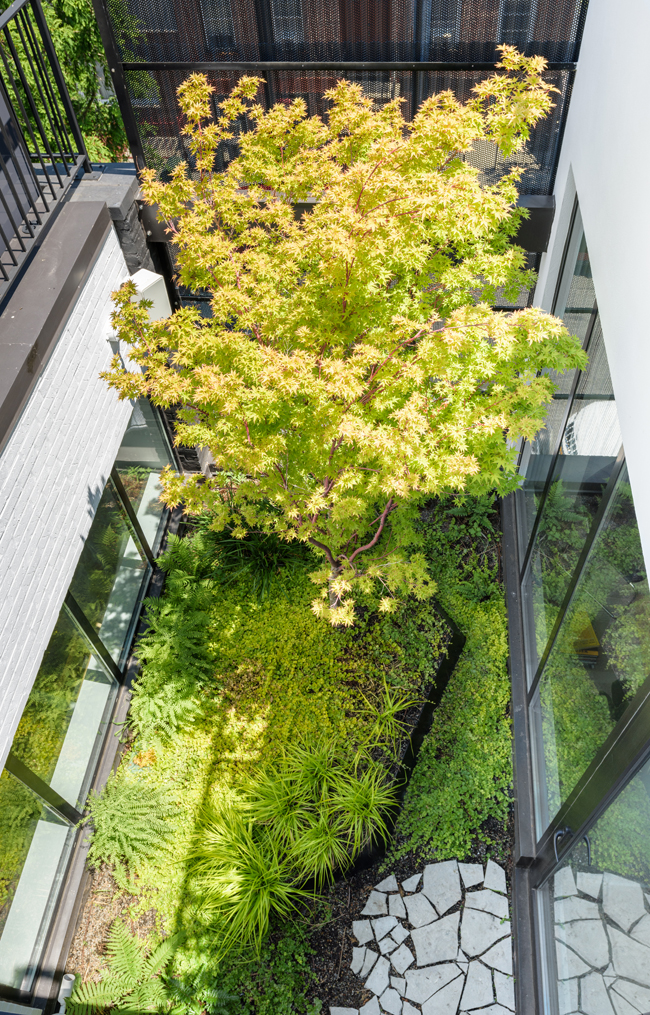