Homes in the Lower Ninth Ward after Hurricane Katrina.Contrary to some politicians’ beliefs, climate change has become an urgent matter. This urgency calls on everyone involved in the designed environment to critically re-evaluate her or his relationship with the Earth. Here I want to address one of our major threats and resources: water. Today in […]

Homes in the Lower Ninth Ward after Hurricane Katrina.

Contrary to some politicians’ beliefs, climate change has become an urgent matter. This urgency calls on everyone involved in the designed environment to critically re-evaluate her or his relationship with the Earth. Here I want to address one of our major threats and resources: water. Today in coastal cities worldwide planners and policy makers discuss flood mitigation strategies that can be flexible, multi-layered systems able to adapt to sea level change. Research reveals that passive systems, which can be both static and dynamic, are needed to accommodate the ever-changing relationship between land and water.

Adaptable – Flexible – Multi-Layered – Passive – Resilient – describe this unique emerging building typology, called  “Amphibious Architecture”. The term was introduced by Dutch architects when describing pioneering projects like the amphibious housing development on the Maas River in Maasbommel, Netherlands, one of the first, widely publicized built examples. The Dutch project exemplifies a modern, engineered solution that can be easily reproduced. It is known, worldwide, as an example of the concept’s feasibility, functionality, and appropriateness as a flood mitigation strategy in flood-prone areas. It is effective in passively adapting to changing water levels and has influenced the development of many similar international projects, particularly the Buoyant Foundation Project (BFP). 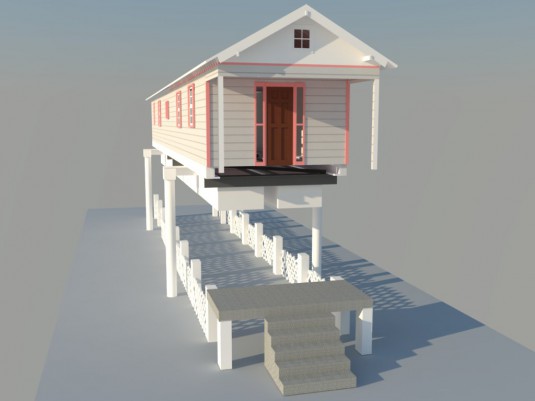 A Buoyant Foundation house in the floating position.

In 2006, Dr. Elizabeth English, a professor at the University of Waterloo School of Architecture in Canada founded BFP in response to the tragic flooding in New Orleans’ Lower Ninth Ward in the aftermath of Hurricane Katrina. Originally designed to retrofit traditional wooden shotgun-style housing, prevalent in the Louisiana, the BFP is an amphibious system that enables these structures to rise and float on floodwaters, while remaining close to street level during normal (dry) conditions. When they are retrofitted, these shotguns will passively rise and descend vertically and avoid flood damage.

The diagram shows the BFP system, comprised of a structural sub-frame that is first installed underneath the shotgun house.  The buoyancy blocks are then attached to a smaller secondary frame, which is fastened to the larger sub-frame. Vertical guideposts are fastened to each corner of the sub-frame. These guideposts telescope up from the ground and ensure that the structure remains fixed in place and only moves in one direction, vertically, during flooding. Utilities are either connected by long, coiled,  “umbilical” lines for water and electrical supply or self-sealing “breakaway” connections that disconnect gas and sewer lines when the house begins to rise. 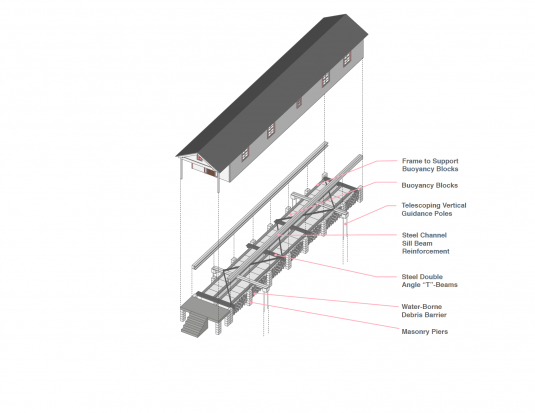 In the aftermath of Katrina, many neighborhoods were either destroyed or left vacant. Former residents, especially those in the most devastated parts of New Orleans such as the Lower Ninth Ward, were reluctant to return home for fear that another flood would destroy their property or that they would have to elevate their homes and inconvenience their lifestyle. The BFP provides a solution to flood mitigation that supports the local culture of New Orleans and acts as a catalyst for the restoration of a physical habitat. 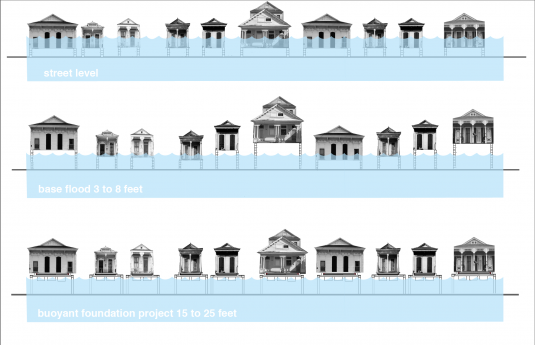 The BFP was conceived as an alternate flood mitigation strategy for the shotgun house. This particular housing typology has been an integral part of shaping the distinctive culture of New Orleans neighborhoods, creating tight-knit communities and contributing to a sense of place. The BFP recognizes the significance of allowing the house to remain at street level in order to restore this tight-knit community culture. It is currently the only strategy that simultaneously resolves the technical, safety, and socio-cultural aspects of flood protection.

The BFP is an environmentally sustainable solution. Through the retrofit of existing structures with buoyant foundations, less waste and energy are consumed when compared to new construction. A buoyant foundation is also more cost-effective to implement than permanent static elevation. As the diagram shows, the BFP provides a higher level of flood protection than permanent static elevation because it is able to adapt to changing water levels. It offers protection not only from future floods but from cultural annihilation as well – it protects not simply the structure but also the street life and the character of the city’s neighborhoods.

The BFP can contribute to the creation of flood-resilient neighborhoods in New Orleans and serve as a small-scale intervention; one of the many layers of flood protection necessary to provide New Orleans with greater resilience for its buildings and the people who occupy them.