The curtain-wall is perhaps the defining innovation of twentieth century architecture. Since the heyday of high modernism, a search for new building forms has usually meant grappling with a glass and steel grid. But as the demands on architecture have changed, in terms of energy performance and sustainable materials, we’ve had to completely rethink the […]

The curtain-wall is perhaps the defining innovation of twentieth century architecture. Since the heyday of high modernism, a search for new building forms has usually meant grappling with a glass and steel grid. But as the demands on architecture have changed, in terms of energy performance and sustainable materials, we’ve had to completely rethink the role of a building’s skin.  Earlier this year, the New York Chapter of the American Institute of Architects (AIA) issued an open call for innovative designs of curtain-wall systems. Six of the entries they received were selected to form the “Innovate” section of the exhibition Innovate: Integrate at New York’s Center for Architecture (CFA.) 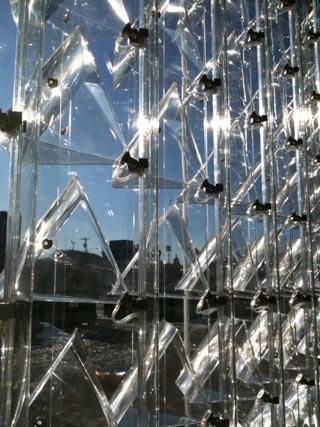 The days of glass panes and aluminum frames are clearly on their way out, and so is the grid. The exhibition space is full of weird white forms, an abundance of solar panels, and highly complex mechanics. An early version of the Integrated Concentrating Solar Façade system (left), was a Metropolis Next Generation runner-up in 2004. Licensed by HeliOptix and developed by the  CASE / Rensselaer Polytechnic Institute, the working prototype on display here looks like an array of television picture tubes. But each transparent pyramid actually contains tiny solar cells that swivel to catch direct sunlight as much as possible.  Perkins+Will’s Self-Shading Curtain Wall, designed for Kuwait University, uses its geometry to avoid the sun as much as possible, creating a characteristically crinkled, faceted surface. Fluent Adipose Tectonic, by form-ula, sets out to right the wrongs of existing curtain walls. The retrofit photo-voltaic panels not only generate electricity for the building, but also shade the interiors, and reduce heat gain.

The piece-de-resistance of the show is a full-size, two-storey prototype of the concrete and glass Liquid Wall, developed by Peter Arbour and RFR Consulting Engineers. At first glance, it seems like a mildly eccentric cousin of a standard curtain wall—the only visible difference being that the concrete frames are white and wavy, like something designed by a timid Gaudi. It turns out that the shape of the frames actually corresponds to the stresses on a curtain wall, and the use of a high-performance concrete called Ductal means that the sections can be incredibly thin. The curvy forms are made possible by the use of rubber moulds, which are also on display. If that were not innovative enough, liquid flowing in tubes set in the wall can carry heat away from the parts of the façade that receive direct sunlight, and use it in parts of the building that require heating.

The larger aim of Innovate: Integrate is to educate the public about current building technologies. But the “Integrate” part of the exhibition, which actually tries to explain construction in the 21st century, is relegated to a lower floor.  Very short write-ups and videos explain the various processes, from the more familiar BIM (Building Information Modeling), to the highly experimental 3-D concrete printing technology developed at the Loughborough University in the UK. There’s a large interactive projection of the BIM model of Yankee stadium, but it is unlikely that a member of the general public will be brave enough to navigate BIM’s rather complex interface and get anything meaningful out of the model.

The didactic mission is perhaps better served by the programming planned by the CFA for the duration of the exhibition. Beginning on October 19 with an in-depth discussion of the Liquid Wall prototype, a series of events will go into further details of various aspects of the exhibition. There is a symposium on Innovation by Necessity, a talk on Advancements in the Building Industry, and even a Family Day, where kids can try their hand at building some innovative structures of their own.

Innovate: Integrate is a great behind-the-scenes look at the forces shaping architecture today. The new curtain-wall systems offer not only better functionality and energy efficiency, but also look very different from what we are used to. We have long been asking if sustainability will result in a new aesthetic; here we are presented with six answers to that question. And if one part of the exhibition outshines the other, it is only symptomatic of the times. Architects themselves are still grappling with the full implications of new technologies like BIM. For the time being, it appears, we innovate better than we integrate.

Innovate: Integrate is on view till 15 January, 2011, at the Center for Architecture, New York.