The Aga Khan Museum and Ismaili Centre hold out hope for an unlikely and uninteresting neighborhood. 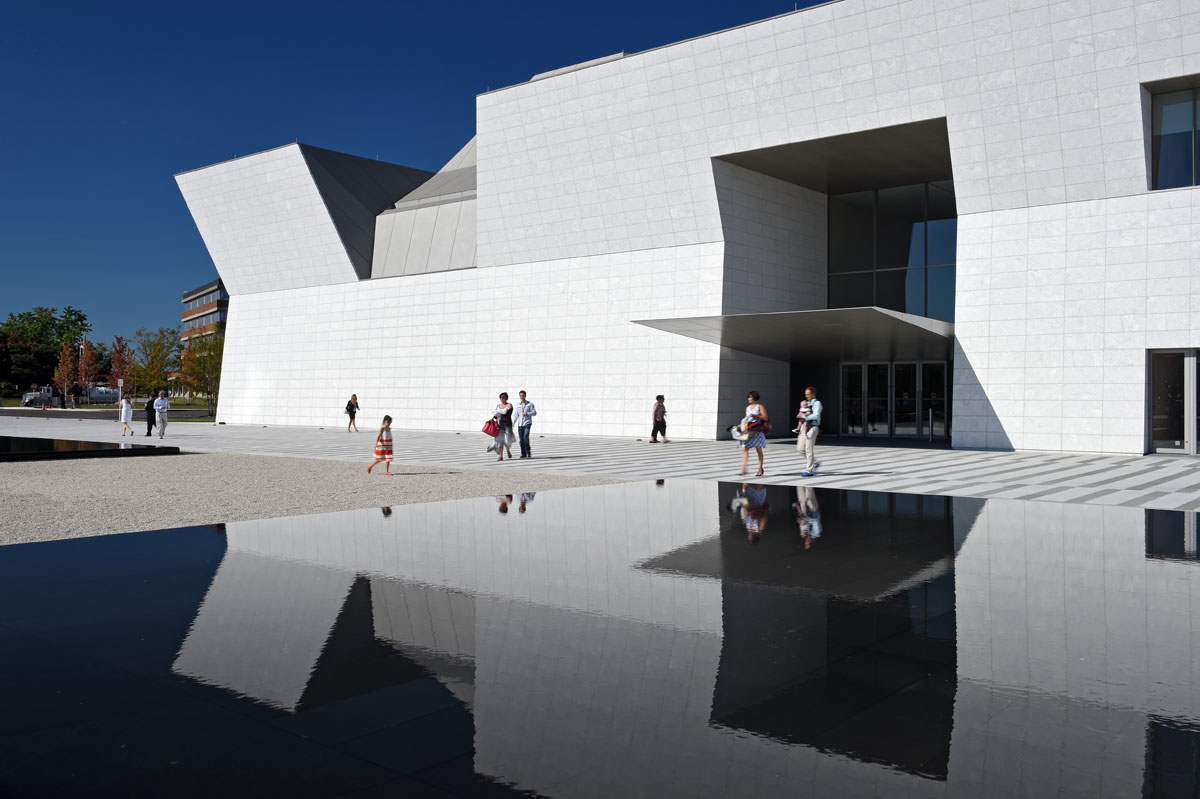 Walls of Brazilian granite give the Aga Khan Museum a fortress-like air, but architect Fumihiko Maki has created sunlit galleries inside. Along with its neighbor, the Ismaili Centre designed by Charles Correa, the museum is an unlikely addition to Toronto’s Don Valley Parkway.

If it’s true that location is everything, Toronto’s Ismaili Centre and Aga Khan Museum have nothing. Situated near a dreary suburban intersection in the city’s North End, the recently completed complex is the last thing you’d expect to find there. But it has already changed the tone of the neighborhood, and become a local landmark to the hordes who drive daily up and down Toronto’s main North-South highway, the notorious Don Valley Parkway.

In this unlikeliest of settings, an exquisite glass dome now rises asymmetrically over a 17-acre formal garden. A remarkable pair of buildings sits side by side, intimately connected yet clearly separate.

The Ismaili Centre, designed by 84-year-old Charles Correa, the master of Indian Modernism, is a beacon. At night, illuminated from within, it looks like a cross between a giant lantern and an observatory. It exerts a welcoming presence that can be felt even through the window of a speeding car. The center contains an expansive prayer hall, administrative offices, and gathering spaces that form its social and spiritual heart.

Beside it, its somewhat aloof conjoined twin, the Aga Khan Museum, presents a more austere face to the world. The architect, 86-year-old Pritzker Prize–winning Japanese practitioner Fumihiko Maki, has kept things minimal. A wonderful sense of restraint suffuses his building; it was intended to house the small but superb Islamic art collection it displays, not compete with it. 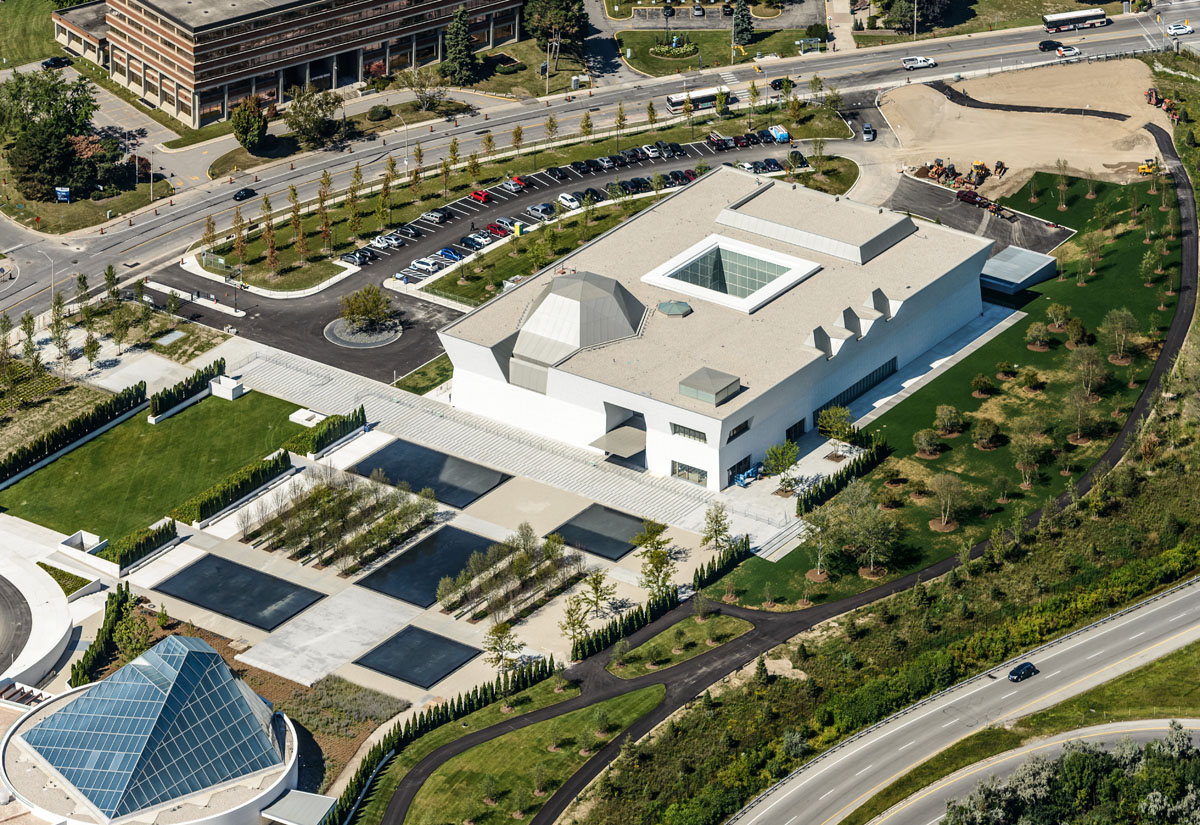 The Ismaili Centre, designed by Charles Correa, was the first building to be planned on the site. Fumihiko Maki’s white Aga Khan Museum was included later. Both buildings opened in September.

From the outside, the museum has a bold, muscular feel. The white Brazilian granite-clad walls have a decidedly chunky, monumental, fortress-like quality. Set back from the surface, windows and doorways appear to have been hacked out of a huge rock outcropping. Except for the polish and crispness of its lines, Maki’s structure seems as much geological as architectural.

The Ismailis, a Muslim sect with 15 million members worldwide, came to Canada in significant numbers when Ugandan strongman Idi Amin launched a program of persecution in the early 1970s. The group’s present leader, the Aga Khan, a.k.a. Prince Shah Karim Al Husseini, is the 49th hereditary imam, a billionaire businessman, and a serious philanthropist believed to be directly descended from the Prophet Mohammed.

The original intention was to build a religious and social center; the museum was added some years later after plans for a similar institution in London fell through. When the rest of the site unexpectedly became available, it allowed the Ismailis to expand their expectations. The center was shifted south to make room for the museum. Though the two buildings are discrete structures, they share a landscape and are joined by a sweeping stone terrace that extends along the entry facade.

A series of gardens designed by Beirut-based landscape architect Vladimir Djurovic surrounds the buildings. The highlight is a courtyard filled with an arrangement of identical reflecting pools so perfectly rendered they might represent the Platonic ideal of a pond. Best of all, the Ismailis went all out and bought mature trees and plants. The park still needs time to grow into the site, but it is decades ahead of starting from scratch.

Sadly, this being suburban Toronto, most visitors will arrive by car, which means entering from the underground parking garage. Even this normally desolate location has been transformed through the sheer imaginative skills of Adrien Gardere, the French exhibit designer who has enlivened the subterranean chamber with high-definition projections of miniatures from the collection ahead. 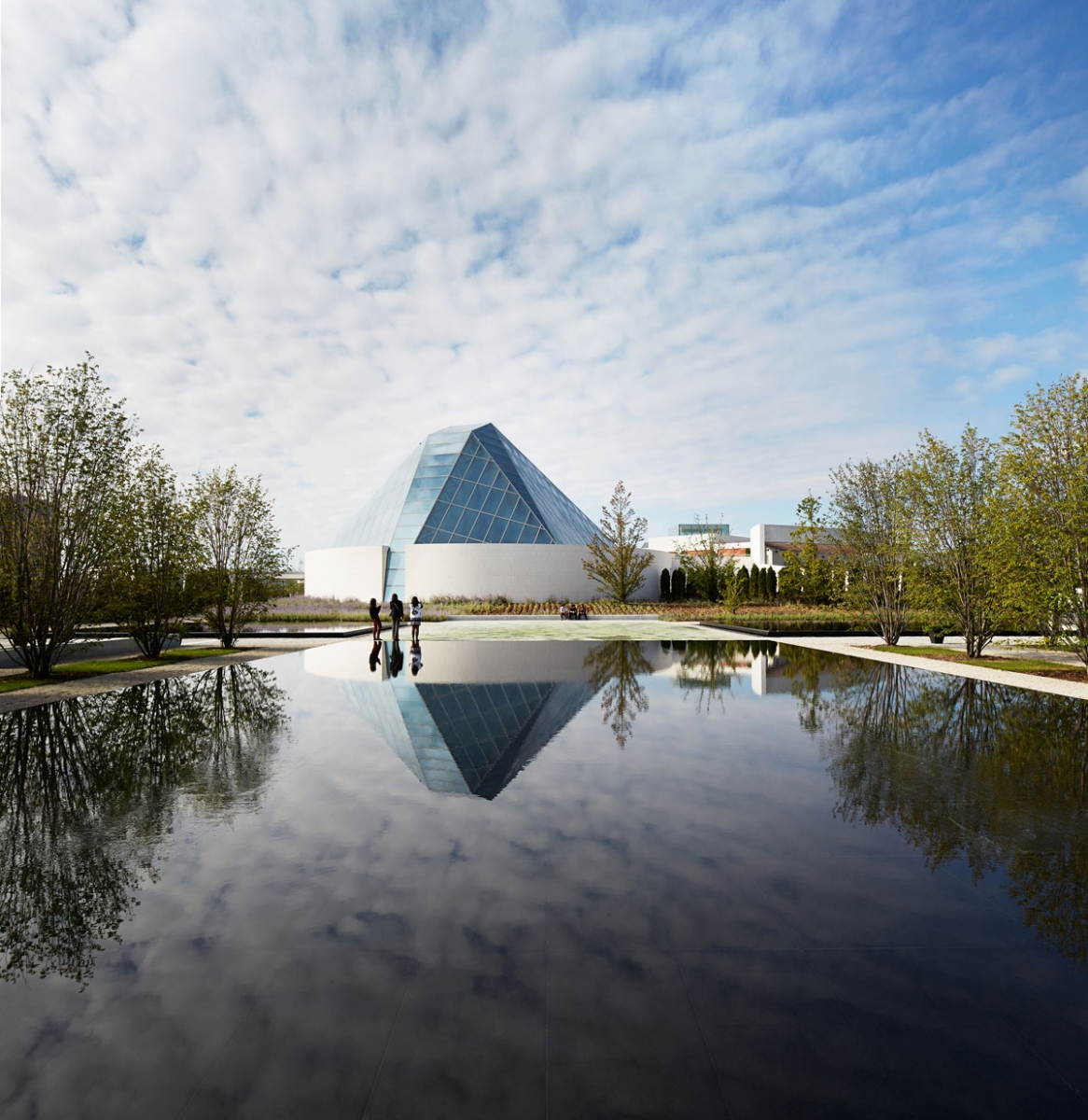 Unlike many galleries, the rooms at the Aga Khan are not black boxes interrupted by objects in illuminated vitrines. The gallery spaces are open and filled with light; the effect is one of intimacy more than awe. The artifacts, which range from a fourteenth-century Spanish astrolabe to painted folios from the Shahnama (Book of Kings) made for Shah Tahmasp in the 1500s, take their place with textiles, ceramics, and a smattering of contemporary artworks.

Though billed as North America’s first Islamic museum, the collection here is smaller than at many other institutions. What distinguishes it is quality; this is the best of the best. Sadly, with little in the way of labels, the majority of visitors will have only the vaguest idea of what they’re looking at. These details aside, the complex adds a new richness to Toronto’s vibrant cultural scene.

“It’s a very formless part of the city,” Correa confesses, “like the bottom of the sea or something. HH”—as His Highness the Aga Khan is called in his absence—“was very keen that the building be seen. It’s a come-on.” 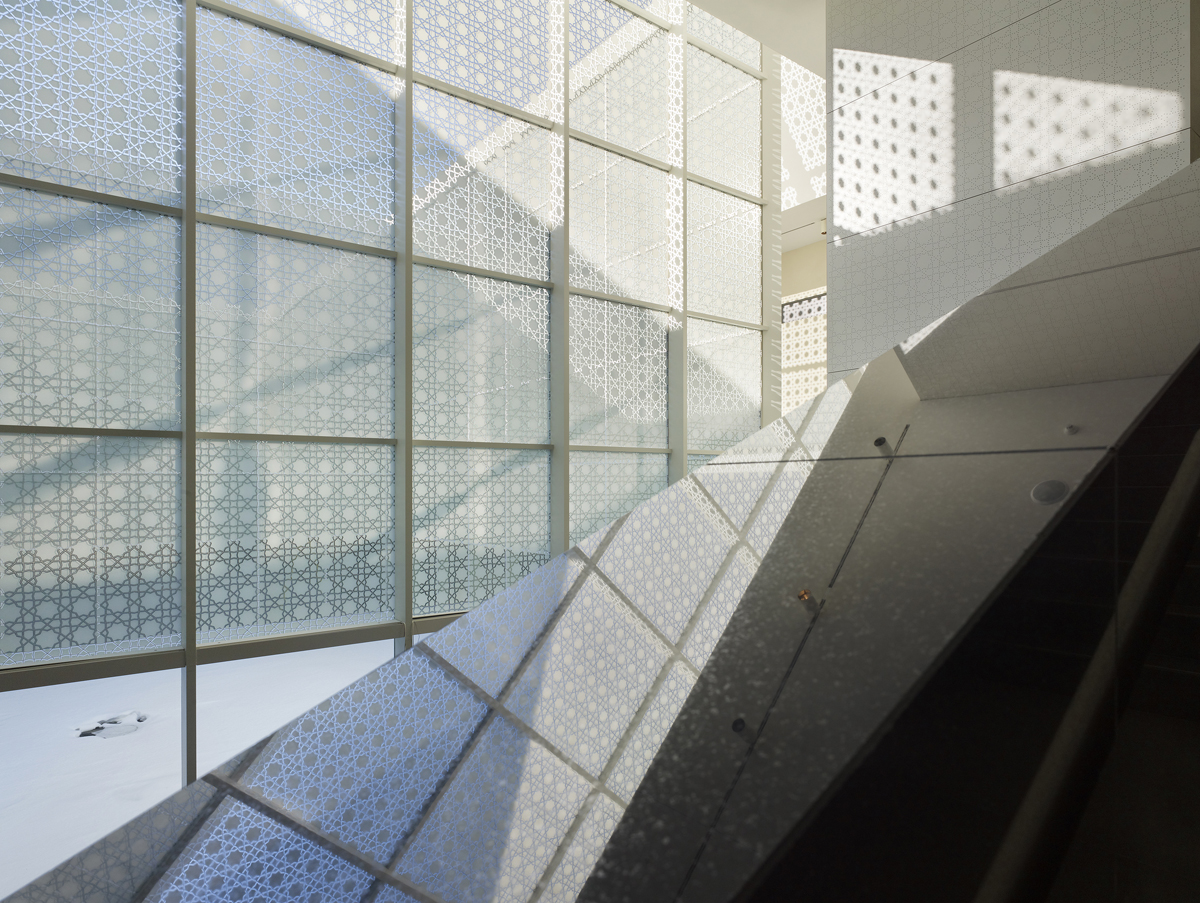 Indeed, what makes the project so interesting is how it balances a context of formless-ness and suburban anonymity with the need for sacred space. This tension between exterior extroversion and interior introversion lies at the heart of the complex. It is both an architectural object and a place of contemplation: noisy outside, quiet inside.

“You don’t start by trying to find identity,” says Correa. “First you find the facts. You look for the axis mundi. Every culture has a sacred geometry. It’s not that you put up some decorations that happen to be Islamic. This is also a community building, a social space that has to be seamless and fluid.” The most obviously “Islamic” elements in both buildings are the courtyards around which they have been organized. The connection to nature is through the sky.

For Toronto, however, the center raises the stakes. It brings social and architectural value to a precinct where its absence was conspicuous. The Ismailis’ great gift to the city ultimately will be one of civic self-respect. It’s too soon to tell whether their act of generosity will lead Torontonians to reexamine what kind of a city they want. Whether it will lead to a rethink of the big box stores, the malls, and the industrial parks that surround the center remains to be seen. But one thing is certain: The future of suburbia suddenly looks a whole lot brighter.