It’s hard to believe that spring is here. Almost more surprising than being able to wear shorts in March is the fact that the great concrete jungle that’s New York City actually has a wide array of brightly colored native plant life, such as the red columbine and southern magnolia. Already in bloom, the gardens […]

It’s hard to believe that spring is here. Almost more surprising than being able to wear shorts in March is the fact that the great concrete jungle that’s New York City actually has a wide array of brightly colored native plant life, such as the red columbine and southern magnolia. Already in bloom, the gardens at Brooklyn Bridge Park‘s Pier 1 give those of us who can’t get out of the city for a day the opportunity to find the beauty of nature just across the water from the financial district.

Pier 1 gives its visitors the best possible vantage point to take in the Manhattan skyline while providing us with two lawns, several gardens, a playground, and a waterfront promenade. Complete with seating made of reclaimed lumber from the original ship yard and the “Granite Prospect” created from stones salvaged from the Roosevelt Island Bridge reconstruction, Brooklyn Bridge Park can be considered one of New York City’s most beautiful and environmentally conscientious developments in recent times.

But the park isn’t just another pretty space; it wants you to get to know it. Now its easy-to-navigate and colorful website features the Spring Plant Guide. The two-page PDF can be printed or viewed from compatible mobile devices, making it easy to find out, in just a few taps of your fingers, what kind of tree you’re sitting under. With its gridded layout, you can print out a couple of copies and take the kids to play Park Bingo. Each flower, tree, and shrub they recognize gets crossed out until they’ve completed their page Bingo-style. Because Brooklyn Bridge Park only uses organic strategies in its upkeep, you don’t have to worry about chemicals and pesticides. Instead, keep your eyes out for the butterflies, ladybugs, turtles, and birds which do their natural duty in keeping the park functioning. 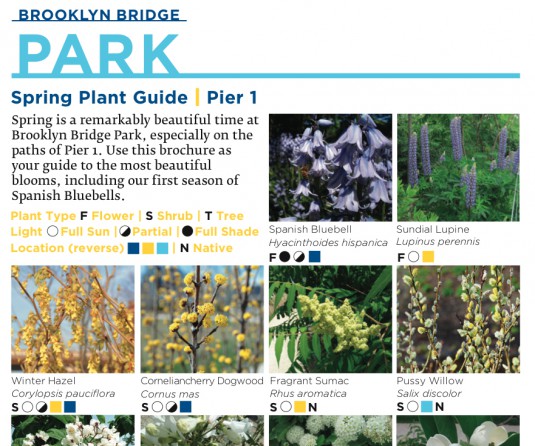 When completed, Brooklyn Bridge Park will span 86 acres and will include six piers, Brooklyn Bridge Plaza, John Street, Fulton Ferry Landing, Empire Fulton Ferry, and Main Street—the last three of which are already open to the public along with piers 1 and 6. Designed by the landscape architecture firm Michael Van Valkenburgh Associates, the park’s harmonious layout and awareness of its environment promises that it will continue to provide a great space for visitors as it comes further along in its completion.

Beginning in 1642, the site was originally a ferry port linking Brooklyn to Manhattan. It became an important marketplace as the city’s population grew, until the construction of the Brooklyn Bridge in 1883, which rendered ferries unnecessary. For most of the 20th century, Piers 1 and 6 were used as warehouses before the Port Authority ceased cargo ship operations in 1983.

From ferry port to reclaimed park space, Pier 1 continues a rich history with New York City. Take a moment this spring to get away from the glass, steel, and concrete, but remember to take the Spring Plant Guide as your map to better understand the natural elements which make this city great.

Kadie Yale is an MA candidate at Parsons the New School of Design and the Smithsonian Cooper-Hewitt Design Museum where she is studying Decorative Art History and Theory. Follow her on [email protected] k_yale

Metropolis has covered Brooklyn Bridge Park and Michael Van Valkenburgh in everything from sustainable hardwoods to Landscape Architecture.