The curvaceous forms created by Chicago architect Bertrand Goldberg are rather susceptible to unfortunate botanical nicknames. His “Corncobs”– the concrete twin towers of Marina City, which are a Chicago icon (left) — will turn 50 on November 22nd this year. The Portland Cement Association (PCA) is organizing a conference to mark the occasion, and the […]

The curvaceous forms created by Chicago architect Bertrand Goldberg are rather susceptible to unfortunate botanical nicknames. His “Corncobs”– the concrete twin towers of Marina City, which are a Chicago icon (left) — will turn 50 on November 22nd this year. The Portland Cement Association (PCA) is organizing a conference to mark the occasion, and the Architecture Foundation will offer special city tours. But while Goldberg’s Corncobs are being rightly celebrated, the fate of his “Clover Leaf” – the building that was formerly the Prentice Women’s Hospital – still hangs in the balance.

In our February 2009 issue, Mason Currey explained the particular dilemma of the old Prentice Women’s Hospital. The building’s unique quatrefoil plan unfortunately also meant that it just couldn’t keep up as the operations of the hospital expanded. The Portland Cement Association celebrates the Corncobs for standing the test of time by being so “adaptable to several re-uses.”  This, it appears, is exactly where the Clover Leaf failed. The hospital moved its operations to a new building. And when the last tenant, the Stone Institute of Psychiatry, vacates in 2011, the building will be transferred to Northwestern University, who are in need of additional space for a research facility. 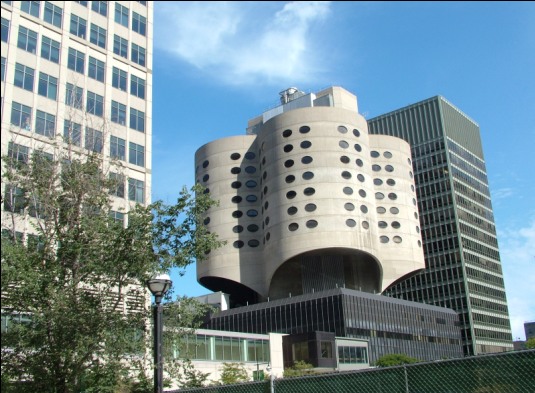 Since the former Prentice Women’s Hospital building is not listed as a local Chicago landmark, there is nothing but architectural reverence to prevent Northwestern University from tearing it down and building something more convenient for their purposes. This has preservation groups like Landmarks Illinois, Preservation Chicago and Docomomo Midwest up in arms, and they were joined recently by the Recent Past preservation network.

The latest update on the saga is that Landmarks Illinois is coordinating a re-use study for the building, with funds from the Midwest office of the National Trust for Historical Preservation. The study will “explore the feasibility of rehabilitating the building for a range of new functions.” Its aim is to show Northwestern University that the Prentice Women’s Hospital, like the feted Marina City, can adapt to the times while keeping the building intact. By “building,” the preservation groups always seem to imply the distinctive outer shape of the structure, deified in the profile picture of their new facebook page at saveprentice.org. But is this the only thing worth fighting for? 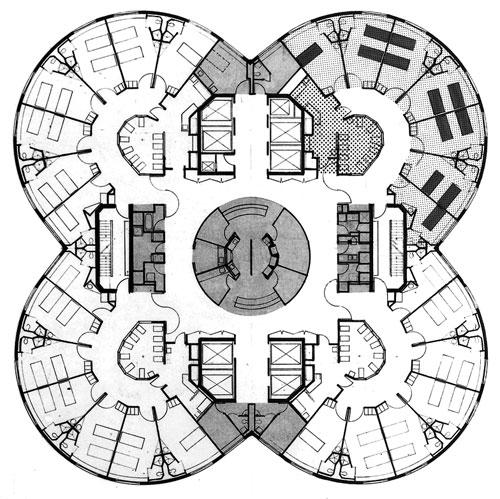 The Corncobs were designed as mixed-use residential and office space, amenable to a series of changing tenants. The Clover Leaf, on the other hand, was very specifically designed to be an efficient and humane hospital, which reduced the distance between nurses and patients. Its outward appearance was the eventual outcome of a plan necessitated by the small details that make this humane delivery of healthcare possible.  The building is valuable as a superior expression of Bertrand Goldberg’s ideas about healthcare, and the details and the plan are the essence of this expression. And yet, they are the very things that any re-use plan will inevitably change, in its well-intentioned effort to save the Clover Leaf.  Such are the vagaries of historical preservation.