Perriand in the Mountains TK

The most impressive item depicted at Matthew Rachman’s exhibit of Charlotte Perriand–designed furniture isn’t physically present at the gallerist’s Ukrainian Village, Chicago, space. Rather, it’s downtown at the Art Institute of Chicago, on display in the exhibition Past Forward, which offers a clue to Perriand’s legacy as a forebear of the original Modernist reformation. There, […] 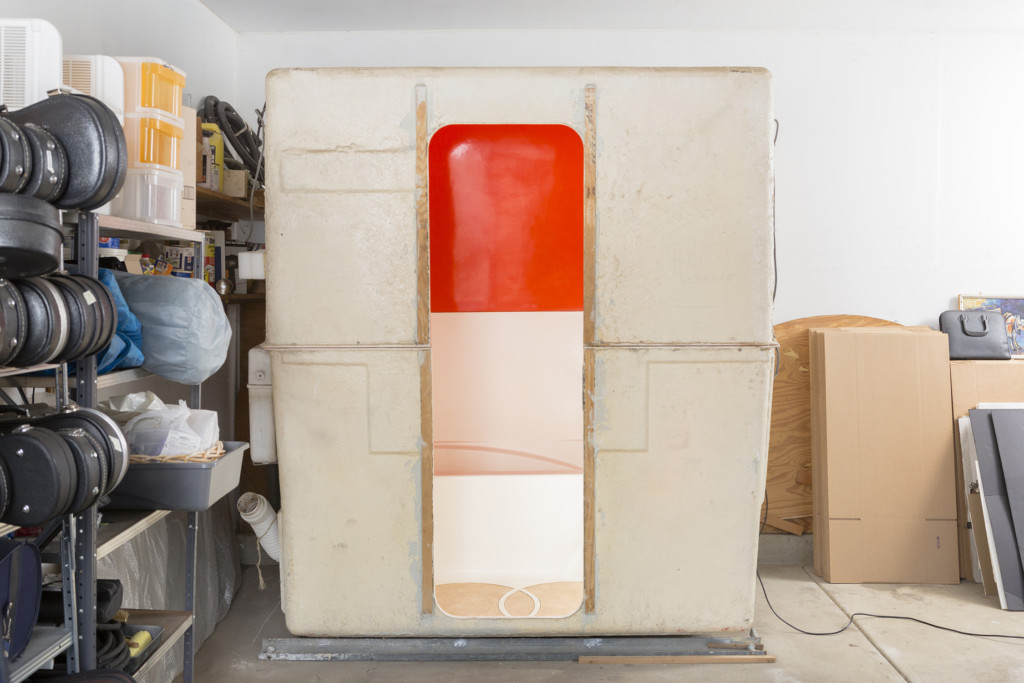 The most impressive item depicted at Matthew Rachman’s exhibit of Charlotte Perriand–designed furniture isn’t physically present at the gallerist’s Ukrainian Village, Chicago, space. Rather, it’s downtown at the Art Institute of Chicago, on display in the exhibition Past Forward, which offers a clue to Perriand’s legacy as a forebear of the original Modernist reformation.

There, amid iconic objects such as Mies van der Rohe’s MR Chair and visionary urban schemes like Ludwig Hilberseimer’s Vertical City, you’ll find one of Perriand’s prefab bathroom units, a concise sink-tub-toilet cube factory-produced in a series for the designer’s Les Arcs ski resort in the French Alps. Two such units have made their way to Chicago; one at the Art Institute, and another huddled away in storage after it couldn’t make it into Rachman’s gallery. (Even with the windows removed, it was an inch too big to slide inside.)

Instead, a few photos of the gleaming red and white, plug-in bathroom advertise what is the gallery’s most tempting merchandise. (It’s a selling show, with support from antique and decorative art dealers Decaso.) Produced in 1975, the bathroom’s polyester and fiberglass shell is entirely of its era—Storm Trooper–white, Archigram by way of A Clockwork Orange.

Yet, it’s somewhat at odds with the material sensibility Perriand demonstrated elsewhere at Les Arcs, a landmark project where she exerted unheralded creative control, and the subject of Rachman’s Perriand in the Mountains exhibition. Most of the furniture at Les Arcs, like the other assorted pieces in the show, are earthy and simple: thick slabs of pine with pleasingly rounded corners, and chairs with woven rattan seats. Perriand had a biographical affinity for natural materials, even while her singular position as a founding mother of Modernism propelled her to investigate new modes of industrial production. It’s an arc of progress she had plenty of time to travel along, between her employment in Le Corbusier’s atelier in 1927 and her death in 1999, at age 96.

The furniture in Perriand in the Mountains was collected by a local architect couple, who, according to Rachman, “pulled all of these pieces off the mountain.” The two traveled across France researching and collecting Perriand; many of their acquisitions from the early 2000s found their way into the present exhibit. “I don’t believe there’s a collection anywhere in the world with this many pieces,” Rachman adds. 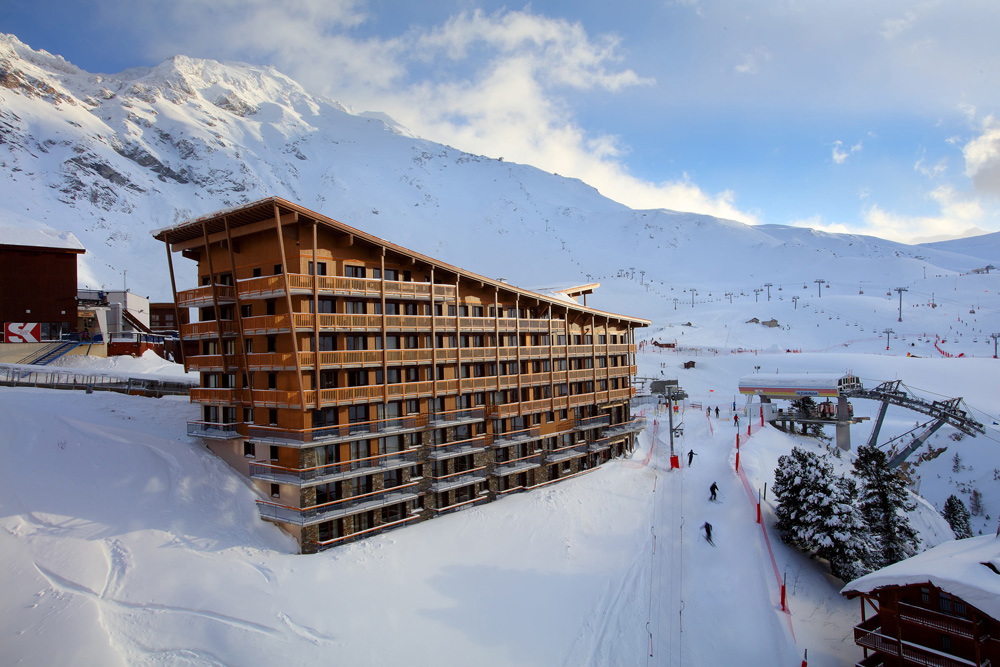 Perriand never slavishly followed the changing tides of design formed in the wake of the aesthetic revolution she shepherded. Her earliest work dabbled in Art Deco, but by 1927 she understood that adoptive-Frenchman Le Corbusier had a road to the future and a chrome-clad luxury Voisins automobile careening down it. She applied to work with him and was rejected with the famously curt retort, “We don’t embroider cushions here.” Undeterred, she persuaded him to drop by her installation at the Salon d’Automne, an aluminum-and-steel bar set imbued with a chrome-plated sense of the machine-age future. Corbusier promptly offered Perriand, then just 24, a job.

The meeting with Corbu was a conversion experience, Perriand maintained. She had a keen sense of how her personal style could integrate the values of Modern design. “I’m aware and in tune with my own age,” she said at the time. “It is mechanical: the cars in the street are polished, shiny. I wear chrome beads around my neck, a belt of metal links. My studio is chromed steel, and I wear my hair a la Josephine Baker.”

She worked with Le Corbusier on several of his most iconic furniture designs, including the Chaise Longue and Grand Confort. She left the office in 1937, but returned several times to work on major projects. Throughout her career, her hallmark was collaboration and teamwork in an era most known for strident geniuses—nearly all men—whose contributions eclipsed her own. Perriand’s role was little acknowledged until a wave of retrospectives in the ’80s, beginning with a 1985 exhibition at Musee des Arts Decoratifs, even while Les Arcs was still an active project.

Les Arcs was a completely determined environment. Perriand led a team of designers that tackled everything from the wood-grained terraced superstructures that stepped down the mountains, to her own furniture contributions. Large and imposing, these buildings still display an almost Wrightian respect for landscape. It was a public project offering affordable leisure to  the broad French populace, and Perriand worked on it for nearly 20 years, beginning in 1968.

Les Arcs was the sort of place Perriand felt drawn to since she was a child. She told the New York Times Magazine that her youthful passion for outdoor sports (skiing, canoeing, whitewater rafting, spelunking) instilled in her a sense of competence and power. As reported by a RISD summary of her career, her most cherished possessions were tools for getting around outdoors: skis, poles, an ice pick, crampons, and rope. (Her accordion also made the list.)

Her furniture from Les Arcs is just as terrestrial and wedded to the earth; a combination of her fascination with homespun craftsmanship filtered through Modern aesthetics. At Rachman’s gallery, there are stolid pine tables, pentagonal and square; seemingly indestructible but certainly unpretentious. An elementally simple honey-grained dining table set would be at home in a woodcut illustration depicting fairy tales from the French countryside.

Not that this furniture is devoid of wit. There’s subtle chromatic and formal ingenuity if you look closely. Wall sconces offer illumination from behind a void—a matte-black panel, dour as a fuse box. And three enameled steel wall-mounted medicine cabinets (red, black, and blue) are a study in seamlessness: The entire unit swings open to reveal inlaid shelves, the “lid” being the unit itself. Rachman calls it a moment of “Why didn’t I think of that?” design. They’re the only extant set of their type he’s been able to verify, as much of Les Arcs’ interiors have been renovated in recent years. The orthogonal layering of a room divider screen shows the Japanese influences Perriand picked up during her significant stays in Asia, which is echoed in the latticework of balconies seen in the Les Arcs building facades.

The exhibition is a good vantage point to understand Perriand’s easy embrace of both machine-age fabrication possibilities and the tactile and intimate delights of wood, which gives her work a humanist quality that was often absent from her International Style contemporaries. This—and the long-overdue critique of architecture’s corrosive cult of masculinity—may do the most to keep her historical reputation elevated. She played by their rules, subverted them, and lived long enough to outlast them.