After mounting a 65-foot Erector Set skyscraper at Rockefeller Center in 2008, and then placing a diverse collection of vintage streetlights like lit columns at a main entry to the Los Angeles County Museum of Art (LACMA), artist Chris Burden astounds us again. LACMA presents Chris Burden’s Metropolis II.1100 miniature cars race along 18 lanes of traffic around […]

After mounting a 65-foot Erector Set skyscraper at Rockefeller Center in 2008, and then placing a diverse collection of vintage streetlights like lit columns at a main entry to the Los Angeles County Museum of Art (LACMA), artist Chris Burden astounds us again. LACMA presents Chris Burden’s Metropolis II.

1100 miniature cars race along 18 lanes of traffic around 25 buildings. Given the miniature scale, they speed the equivalent of about 230 miles per hour. 13 trains mosey along through this mini-city as well.

Art that makes you feel young, even for a fleeting moment, is priceless. That a grown man built this car-racing track and made it smarter than just a boyhood fantasy is compelling on its own terms. Because it’s about cars, we might even think we can learn something about life in Los Angeles, this youthful city that once again seems like it will never grow up.

Chris Burden at the opening of Metropolis II

Burden does not claim Metropolis II as a utopian vision, and unlike Fritz Lang’s 1927 film Metropolis which inspired him, this is not a dystopian vision either. “Only in the speed of the cars is this the city of the future,” he says. “The city of the future is that every car is going to be controlled.” Burden gets serious here. “Rigidly controlled. Do you know what I’m saying? Controlled by Google, not by a driver. It’s insane that somebody who’s drunk or having a heart attack or is a teenager on speed, can drive a two-ton diesel projectile; it’s insane! My dream for the city of the future is that the cars go faster and be totally automated.”

“I want to evoke the energy of a city, and the sound is a really important part of it,” Chris Burden says. “It provides a tension, more than anything else. It’s not just seeing the cars go around, it’s the noise level.”

After a few minutes the sound becomes oppressive, it’s hard to talk in this room. The walls are hard and bare and the soundscape is an unknown one, like a digital sound file sped up, with no off switch; and no natural sounds or sights to soften it. “Nature is just, simply suggested by the different colored phenolic panels that the buildings rest on, so there’s green, brown, or light tan,” Burden says. “They’re totally abstract.” I tell him I might have appreciated some trees. “Well, where do you stop?” he quickly answers. “I mean, you could keep going on and on. There could be little people, there could be lights that turn on and off in the buildings. I’m not trying to make an architectural model in the traditional sense. We considered having water at one point! But my experience with water is not a good one. Everything that uses water, leaks. If it can leak, it will leak. But we considered having canals and a water flow. And we decided against it.”

“The buildings are fanciful,” he says, “none are based on actual buildings, except maybe the ‘Viagra Tower,’ the Eiffel Tower.”

“We used a lot of wooden blocks, which were real versatile for us. We used Lincoln Logs, Erector sets, plexiglass, actual glass, and Meccano. Pottery Barn, a couple of years ago made a thin-plywood House of Cards, bigger ones. And they were relatively expensive so I guess they didn’t sell well. So we were able to amass a massive collection of them when they went on sale. And those were useful.” 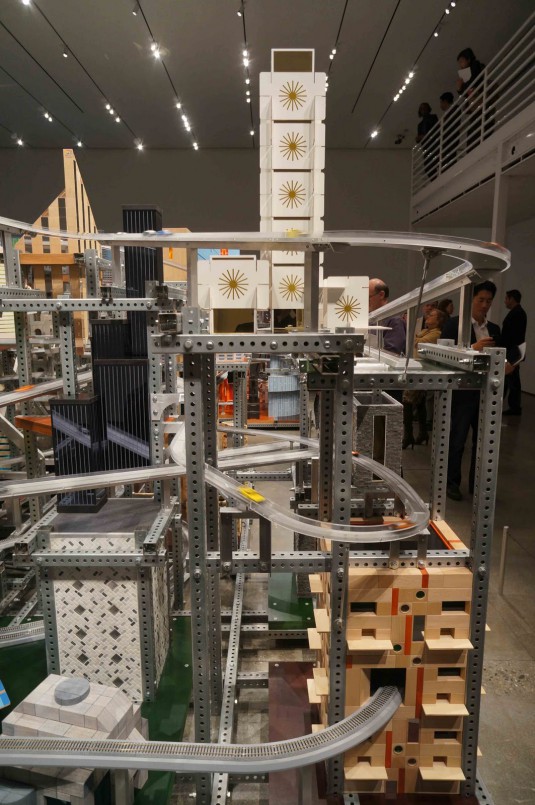 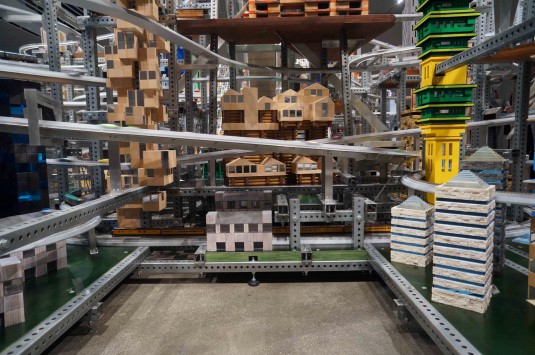 Burden says the architecture was not his priority. “We got it operational without any buildings in it. So the buildings had to fit the confined spaces.” I tell him it sounds as if there was about as much “urban planning” in this piece as there was in L.A. itself. Burden smiles. “Maybe more,” he says. “We considered the entirety at once, which is not something L.A. does.” 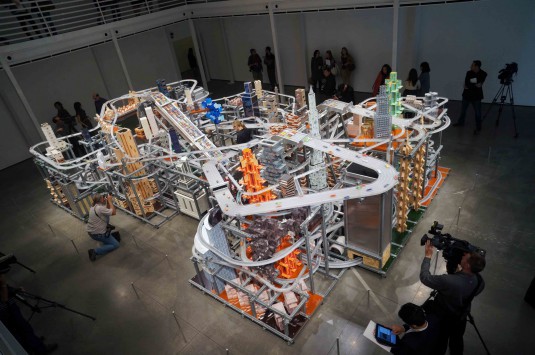 And he mounted modern architecture on top of a base of Lincoln Logs, making layers of history, seen less often in L.A. than in most of the world’s great cities.

The religious buildings, Burden says are just “indications. The one is obviously, quote, a Christian church, and the other, with the onion domes is meant to indicate ‘the other religion.'” He smiles, maybe a little nervously. “Be it Hindu, Muslim, it’s undefined. It’s just meant to evoke “the other.” 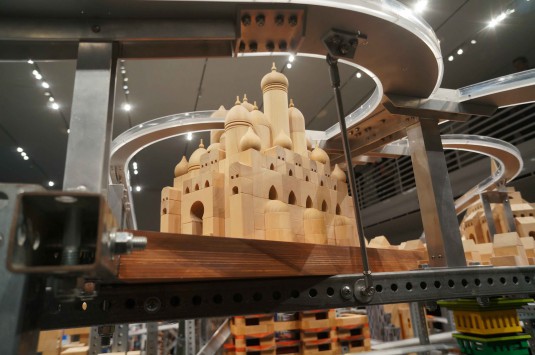 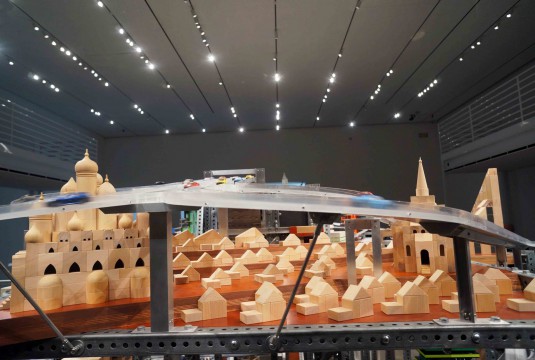 I wish Chris Burden had designed the room Metropolis II inhabits. As it is, it feels sterile, not a delightful place to be. The city/object/sculpture does not organically touch the ground plane, but stands clinically slightly above the floor. (Of course it’s cordoned off from touch, but I’m sure kids will want to try to grab a speed-racer.  Parents–word is LACMA will sell the miniature cars when their useful life in this work has ended. LACMA can be so good at installing art to make it come alive. They’ve recently hired artists such as Jorge Pardo and Franz West for installations; West’s installation of the Art of the Pacific, with tea-stained walls, are some of the wonderful museum rooms in the nation. As Metropolis II is on loan to LACMA for ten years from  collector Nicolas Berggruen, I suggest Chris Burden come back and improve the room. At Burden’s studio in Topanga Canyon, where he spent four years building this, you’re surrounded by nature and sensuousness. This metallic piece with many hard-edges would benefit from softer, more lush, dare I say naturally noise-dampening surroundings. 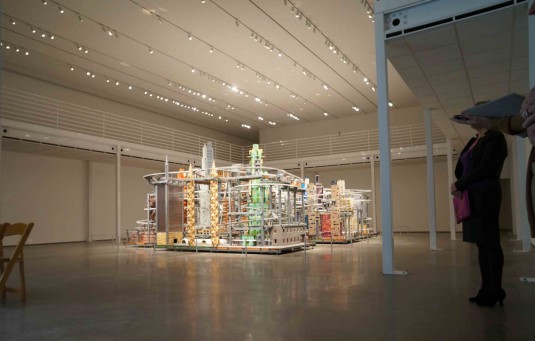 After about half an hour in the room, I became very hoarse from having to shout, to talk to friends. That noise is important Burden says, to recreate the stress of city life. But even he shows pretty strong relief when Metropolis II turns off. This machinery requires breaks or it could burn out. LACMA plans to turn the work on only Fridays, Saturdays and Sundays. The general schedule, subject to change, is:

65 year-old Chris Burden, originally from Boston, trained as a sculptor, a minimalist. “As a minimalist, my teachers were always trying to distill what the essence of the experience was. So as I studied sculpture more and more I came to the conclusion that sculpture was activity. A sculpture forces the viewer to be active. So if you reduce that, as a minimalist, what’s the essence of sculpture? It’s human activity. That was the basis for many of my performances.”

In 1974 he gained notoriety with Trans-fixed, in which he had himself crucified atop a Volkswagen Beetle. Many of Burden’s works deal with cars, trains and technology.

“At some point in the mid-70’s to late 70’s I started making objects again. I actually made a car from scratch, called the B-Car. Since then I’ve made many objects and a lot of them are performative objects, including Metropolis II. I don’t have to do the performance anymore, the art is performing for me.” 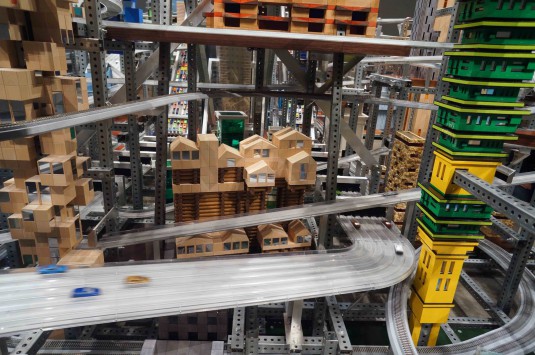 Burden, famous for having an assistant shoot him in the left arm as a work of art in 1971, draws a line without much trouble between his art that must have been very difficult to look at, and this colorful, toy-like crowd-pleasing piece. “They both intrigue people,” he says with pride, “so there is some sort of tie-in.”

The 1100 cars of Metropolis II get carried up a conveyor belt, to speed back down and around. Here, the artist’s assistant puts in earplugs and stands in the center, ready to right a car that might get stuck. The human in this Sisyphean construct looks out of scale and out of place. Vulnerable and lost in a new and changing world, like Adam and Eve. 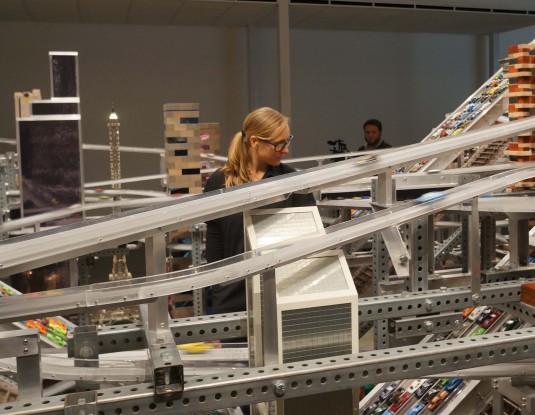 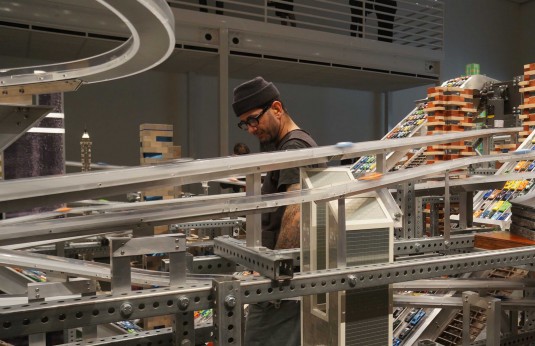 In this compelling vision of our future that Chris Burden sets in motion with Metropolis II, it’s reassuring to know that at least it has humanity at its heart.