The planning profession has reached something of a critical juncture. This is not, of itself, a particularly interesting revelation; to hear planners talk about it, our profession is pretty much always reaching some sort of critical juncture, crossroads, etc. This time, however, we might be onto something.I recently finished plodding my way through editor Roger […]

The planning profession has reached something of a critical juncture. This is not, of itself, a particularly interesting revelation; to hear planners talk about it, our profession is pretty much always reaching some sort of critical juncture, crossroads, etc. This time, however, we might be onto something.

I recently finished plodding my way through editor Roger Elwood’s Future City, an early-seventies anthology of “new wave” science fiction takes on (wait for it…) the “Future City.” The contributions were unerringly pessimistic, forecasting a future of out-of-control urbanism roughly on the model of the South Bronx circa 1977, but With Added Fancy Computers. The contributions were also, and again unerringly, wrong. The archetypal City of 2012 hardly resembles the nightmares they envisioned, and the attitudes towards urbanism held by many of the stories’ characters are, if anything, even more distant from the current re-awakening of interest in all things urban.

In previous posts on Landscape Urbanism, I’ve argued that the narrative of urbanism—the one accepted by both the mass media and highbrow magazine monthlies—is up for grabs at the moment. It’s changing, to be sure, but through an international, multi-media conversation the results of which nobody can yet foresee. For as long as this conversation is ongoing, it’s perhaps not beyond reason to propose that we’ve all got a certain moral duty to flag both its best and worst contributors for either praise or derision.

With that said, then: three cheers for Mark C. Childs, and a chorus of raspberries for Boyd Cohen.

Urban Composition: Developing Community through Design is Childs’s contribution to the Architecture Briefs: Foundations in Architecture series published by Princeton Architectural Press. The series, we’re informed, is “designed to address of a variety of single topics of interest… in a user-friendly manner alongside the basics of architectural thought, design and construction.” Though ostensibly written for “architecture students and professionals,” Childs’s Urban Composition could be enjoyed just as easily by the interested layman.

In Urban Composition, Mark C. Childs presents not only an introduction to the practice of conscientious urban design, but also advances an optimistic, collectivist vision of civil composition’s contribution to the commonwealth. Image courtesy Princeton Architecture Press

Indeed, it’s the accessibility of Childs’s writing that initially gripped me. There are times when it all gets a bit strained—the man clearly loves similes and metaphors, for instance, and at times seem driven to cram as many as he possibly can into each paragraph—but despite its alleged audience-targeting, this is a book that could shape the ideas of urban design’s interested consumers as much as it could the producers.

So thank goodness, then, that Childs is so clearly on the side of the angels. His Urban Composition is animated by the idea that the practice of what he calls “civil composition” should strive towards concinnity, the “skillful and harmonious adaptation or fitting together of parts to craft a whole… to produce environments that enable and support not only private goals but also the commonwealth.”

Throughout the text, Childs addresses the practice of “composition” rather than that of “design,” and points constantly to the importance of context to successful design; the “poetry and vitality” of cities “comes from their collective composition—the interactions among multiple designs” (and, as he later makes clear, interactions among the consumers and observers of those designs and among the social, economic and political systems in which they are situated).

Only in the last third-or-so of Urban Composition does Childs directly address his argument to professionals in the planning and design fields, charging them with “responsibility for a set of collective goods” and holding them to the “three aspects of ‘good work’—excellence, responsibility, and meaning.” Even here, however, Childs avoids writing to excluding the interested layman, providing “outside” readers with a better explanation of what it is that “civil designers and editors” do than many of our professional organizations have thus far been able to manage.

The bulk of Childs’s book works to lay out and advance, piece by piece, an argument for the pivotal importance of urban concinnity; here he differs dramatically from the tack pursued by Boyd Cohen, Fast Company’s “climate capitalist”-in-residence. Whereas Childs foregrounds the enrichment of the commonwealth and the creation of truly public goods, Cohen’s work is situated squarely within the context of competitive capitalism. Urban Composition is not an overtly political work in any way, but Childs clearly sympathizes with essentially collectivist—if not outright anti-capitalist—values. “Civil composition that aims to enrich the commonwealth,” he concludes in his Introduction, “is a more democratic, adaptable, diverse, and resilient approach to creating vibrant settlements… It does not promise instant planet-changing revolution or unconstrained individual expression, but rather the action-by-action evolution of a vital community.”

Cohen eschews such mushy leftism in favor of a corporatist tone sure to secure him a TED tryout and a lucrative career on the lecture circuit. Like most who look promote their own brand of a kinder, gentler capitalism, he isn’t so much deliberately mean-spirited as he is selectively blind.

In his “Smart Cities Should Be More like Lean Startups”—if ever the title of a blog post was meant to launch a corporate speaking career, this is it—Cohen argues that urban planners and policymakers with an interest in creating “smart cities” should adopt a “lean city” model derived from Eric Ries’s concept of the Lean Startup. Central to his argument is the premise that urban interventions should be introduced as MVPs, or “minimum viable products” (not, as a friend responded, “like late-1990s Juan Gonzalez?”, though I agree that the branding needs a bit of work).

“A minimum value product,” writes Cohen, “is the most efficient, minimum product or service that can be developed to test a hypothesis about how users will interact with the innovation.” He constructs a framework for the implementation of MVPs that seems to have just that—the implementation of MVPs—as both its means and its end, though asserting over-defensively in later comments that this is not the case. 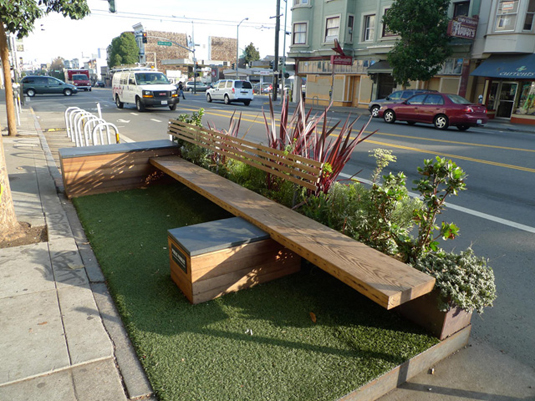 The “minimum viable products” or “MVPs” championed by Boyd Cohen and pleasant enough means—there’s nothing wrong with a nice parklet, after all—elevated to totemic significance as ends in service of the present order. Public-domain image licensed under Creative Commons

What Cohen suggests isn’t at its core anything new, and certainly isn’t—or shouldn’t be—rooted in the latest craze to hit boardrooms and HR departments. Calls for the urban bureaucracy to be more nimble and more open to change, to focus on the “small battles” and learn via trial-and-error, actually have a fairly long and well-documented history in planning theory; pragmatists have been calling for much the same sort of responsiveness from municipal government since at least the Progressive Era. Tarting up these ideas in startup-speak and fetishizing the entrepreneurial spirit might help Cohen nail down that coveted gig on the lecture circuit, but certainly won’t mark a tremendous step forward in the debate over what cities and city government should be.

There is only one solution to the myriad environmental crises we presently face with any chance of success: patterns and practices of private consumption must change, potentially in a manner that is irreconcilable with real-and-existing capitalism. Like the British Conservatives’ “Big Society”—an idea which draws on economist E.F. Schumacher’s 1970s polemic, Small Is Beautiful—Cohen’s “Lean City” is an attempt to avoid hard choices about big questions by focusing our attention on the dynamics of making tiny but complicated decisions. Instead of promising us utopia—or even trying to envision it—Cohen offers us “the Green economy,” that elusive beast which stalks the high-rises and pedestrian boulevards of Vancouver, Portland, and other “Smart Cities,” glimpsed occasionally out the corner of some venture capitalist’s eye but never yet tracked down nor captured.

While neither Childs nor Cohen actually envisions for us the utopian city of the future, Childs at least seeks to open up for us the avenues and possibilities through which we—as Habermasian “participant-citizens” can create one of our own. With his eyes glued to sensors and MVPs, Cohen—like any capitalist, climate- or traditional, worth his or her salt—is blind to much of what makes cities worth living in to most of the people who actually do.

“Buildings, landscapes, public works, and other built forms embody aspects of narrative,” Childs writes. “They are, at least, settings that frame and evoke stories.” Poetry, romance, and above all plain fun are sacrificed often enough at the altars of efficiency and bureaucracy-slimming; unless and until Cohen &co can devise sensors and metrics to quantify these important, oft-ignored factors, there’s simply more to be said for the concinnity-stressing approach Childs advocates for.

Childs implores designers and design editors to “solve for pattern,” employing the farmer-poet Wendell Berry’s term for “solutions that solve multiple problems, satisfy a range of critical criteria, and support the health of systems.” As Childs himself stresses, the “potential power of small projects” shouldn’t be dismissed, but should be situated at all times within a larger context, not viewed as an end in and of themselves.

Leanness, it is worth reminding ourselves, was not always the totem that devotees of the neoliberal state have made it; indeed, there’s much that can be said for bloated and inefficient bureaucracy as well, but neither should that be considered a goal worth striving for. Leanness and bulk are worth only what they enable, are means rather than ends. The concepts Childs suggests we work towards—environmentally sound, socially resilient, and soul-enlivening settlements—on the other hand, are goals worth fighting for.

Cohen’s is a limited, prescriptive urbanism; disagree with the values that undergird it, and the “lean city” concept melts into so much hot air. Childs’s, on the other hand, is an urbanism of possibilities and potential. “Context-rich urban design that seeks to provide a set of collective goods in concert with works of past, present and future designers,” Childs writes, “is a more consequential and engaging activity than mere self-expression.” But even “mere self-expression” is worth more to the commonwealth than cheap imports from the corporate lecture circuit. If the narrative of urbanism truly is up for grabs, let us hope that it’s seized by those who recognize urban possibility, rather than by those who prescribe empty and emptying platitudes.

Boyd Cohen, “Smart Cities Should Be More like Lean Startups”

Peter Chomko is a native of Pennsylvania’s Lehigh Valley and a Master of City Planning (2013) candidate at the University of Pennsylvania School of Design, with a professional and research focus on labor issues and economic development.

Keep an eye out for Metropolis’ October 2012 issue featuring the future of cities.