An architectural exhibition in San Jose turns the urban experience on its head.

Collaborators test out their inflatable structure before installing it inside the gallery.

Just one month after receiving the top prize in Metropolis’s 2008 Next Generation ® Design Competition, Eric Olsen was on the scene again, this time in downtown San Jose, California. Collaborating with Ga-Ga / Jordan Geiger, Thomas Stephen Bates, and Stijn Schiffeleers, Olsen helped create an inflatable structure that took over a vacant retail space and challenged visitor’s relationships with time and place in cities.

The inflatable was created for Day for Night, a temporary architectural installation commissioned by the City of San Jose as a part of their 2008 Zero One Festival. The exhibition, which ran June 4-14, was inspired in part by the work of Verner Panton. Known primarily for furniture design, like his cantilevered chair created for Vitra in 1968, Panton also created an architectural installation in 1970 known as Visona II. 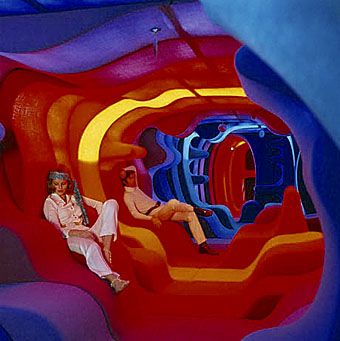 Like Visona II, the flowing curves of the San Jose inflatable create a multilevel resting zone for people to sit inside. Sensors in the structure respond to a visitor’s presence, triggering live audio-video feeds from cities across the globe, including Paris and Oulu, Finland. These feeds are projected on the white walls, transporting you to another time and place and creating the unusual feeling of stepping out of the midday California sun and into the nighttime of Finland. Paul Virilio’s 1985 essay The Overexposed City was another inspiration for the concept. “In this new perspective devoid of horizon, the city was entered not through a gate nor through an arc de triomphe, but rather through an electronic audience system…the surface of inscription… becomes a kind of distance,” Virilio wrote.

This collaboration allowed Olsen to advance his theories on binding materials, something he explored in the design of his Next Gen-winning water tarpaulin. “The tarpaulin and inflatable are actually quite similar in terms of how they are fabricated,” he said. “Both are soft vessels that derive their form from a contained fluid, be it water or air; both are forms that vary based on the volume and pressure of fluid they embody; and both offer complex problems of pattern making and seaming.”

Incorporating the lessons learned in constructing the inflatable, Olsen now hopes to have a working prototype of the tarpaulin early this fall.

But what’s to become of the beautiful white inflatable? It will get blown up again tomorrow night for a benefit supporting Capacitor, a San Francisco-based dance company. In the fall, Olsen says it will be installed in a gallery exhibition at the California College of the Arts. 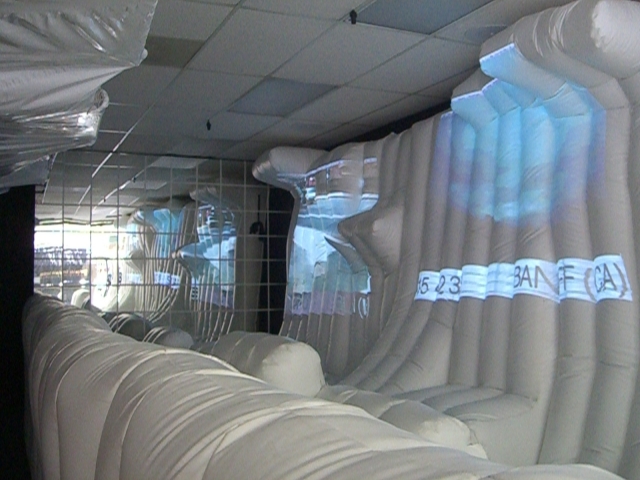 The inflatable with the projections on the wall. Photo by Evelyn Dilworth. 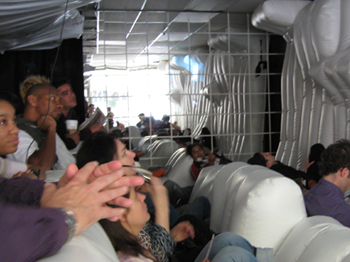 Opening Day: Visitors recline and watch the live feed from various cities around the world via projections on the walls. 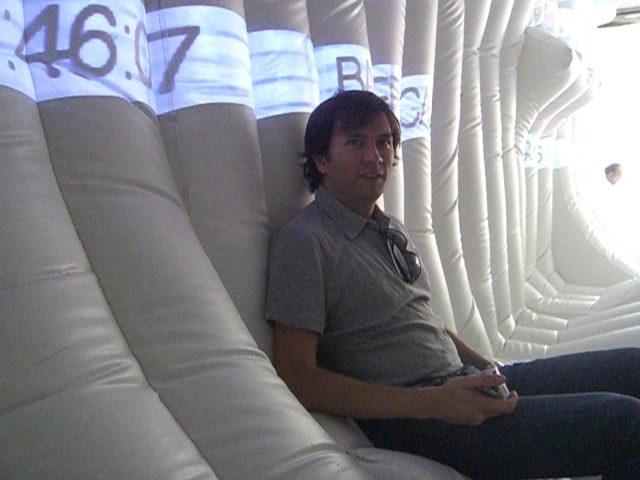 Eric Olsen in a quiet moment. Photo by Evelyn Dilworth.