Designing and Building a Pavilion: IX

On-site assembly began just three days before our deadline for completion. Up until the last day, it rained steadily but there was no delaying our progress. Initially about two-thirds of the 26 aluminum “bricks” were brought to the site, while the rest were kept in storage until they would be needed. Two box trucks were […]

On-site assembly began just three days before our deadline for completion. Up until the last day, it rained steadily but there was no delaying our progress. Initially about two-thirds of the 26 aluminum “bricks” were brought to the site, while the rest were kept in storage until they would be needed. Two box trucks were used to move the bricks, sometimes only one or two pieces could fit in a single truck due to their size. The largest brick is nearly eight feet wide and fourteen feet tall. Most bricks required a minimum of four people to lift and the better part of one day was spent transporting the majority of the pieces to the site with the remainder following slowly over the next day. 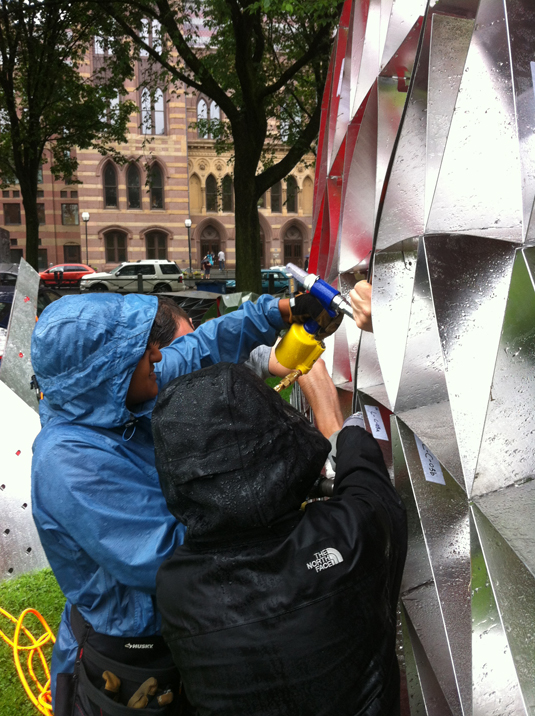 The foundations were laid out on the site in advance. Three raised platforms create the footprint of the pavilion and are made with a plywood box and metal feet on adjustable base plates. As a requirement we could not make any holes or punctures in the ground, so the platforms had to be raised in order to be leveled. Each platform is slightly narrower than the minimum width of the wall to help hide the edge and suppress its impact visually. When the pavilion was finally completed a black cloth skirt was used to conceal the feet and base plates. Each platform had been set to a consistent height before fabrication began. 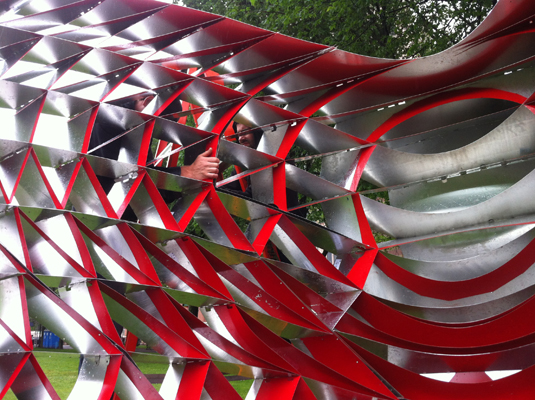 The first piece to go in was the corner brick, were the North and East walls intersect.  Pieces that sit on the platforms were fastened down using self-tapping screws. Adjoining one brick to the next was done using rivets. Any rivets used on site have a white head so that they are distinguishable from rivets used in the shop to assemble each individual brick. When the time comes to dismantle the pavilion, only the white rivets will need to be removed to break the structure down for storing. After the corner brick was set, the successive pieces were installed for both the North and East walls. By the end of the first day, with only a partial team onsite, we had managed to assemble eight bricks including the first piece of the roof. 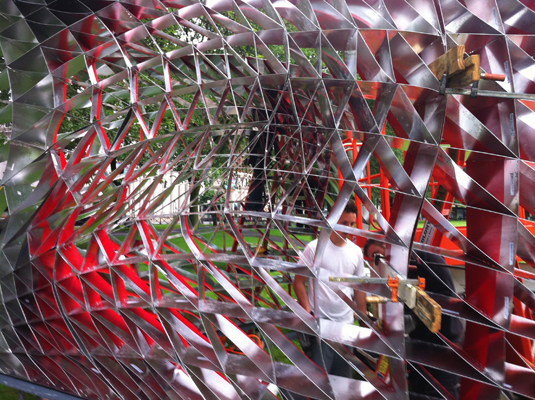 The next day, with a full team on-site, the North and East walls were completed and the majority of the roof was set into place with the help of a telescopic forklift and scissor lift. The roof was assembled in sections, each section was spliced together on-site from two prefabricated segments using sleeve inserts, also made from aluminum. The largest spanning section is between the far ends of the North and East walls. These areas of the walls received cross-bracing members to minimize buckling under the weight of the roof. At the end of the second day the largest spanning section was temporarily shored up on pipe columns until the third wall could be installed. 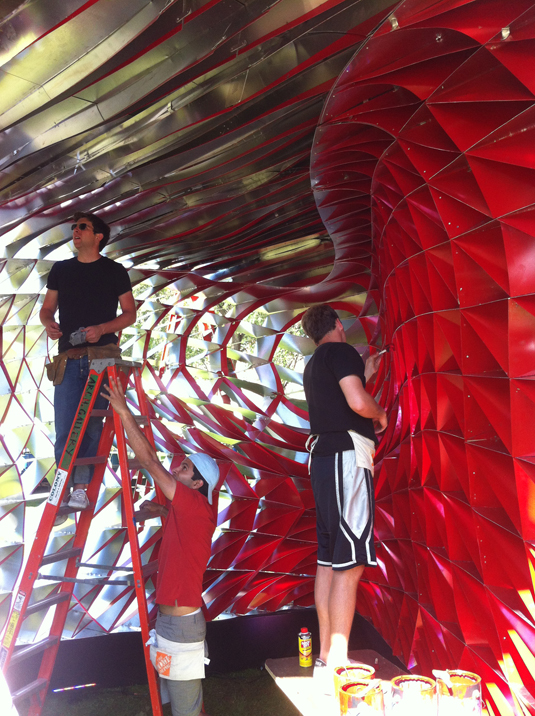 On the third and final day of assembly the rains stopped and the sun shined brightly. The third wall was swiftly installed forming the two entries and the completed form. Well before the third wall went up our presence on the Green was attracting a lot of attention. Anyone who walked by would stop and stare or ask questions. The crew hired to set up the stage and equipment for the festival was intrigued by our design and offered to assist us in any way they could.

Work was completed in the afternoon of the third day. A few of our last on-site tasks included paint touch-ups and wiping the panels clean of streaks left by the rain.  For the finishing touch the school’s name and the sponsor’s logo were added in small letters to the right of the main entry, just in time for the ribbon cutting ceremony.

John Lacy is currently enrolled in the MArch II Post-Professional degree program at Yale. Prior to attending graduate school he worked in New York for seven years at a handful of architectural practices and for three years as an adjunct professor at the New York Institute of Technology. He has a BArch degree from Syracuse University where he was the recipient of the AIA Henry Adams Medal.