Designing and Building a Pavilion: X

The final day of construction dawned clear but it was initially chaotic. The last-minute insertion of additional cross bracing to counter buckling at the corners slowed our aggressive construction schedule at first. But once the problems were mitigated – an easy fix– the final roof panel and a third structural wall could be installed safely […]

The final day of construction dawned clear but it was initially chaotic. The last-minute insertion of additional cross bracing to counter buckling at the corners slowed our aggressive construction schedule at first. But once the problems were mitigated – an easy fix– the final roof panel and a third structural wall could be installed safely and quickly. With the roof and walls secured, temporary columns supporting the rest of the roof were removed. Though the structure was substantially complete and had settled into its designed equilibrium, we dedicated several hours to final finishing touchups and site cleanup. As Festival volunteers prepared to move in and all of us anticipated he opening ceremony, one team polished clean the aluminum panels, which had gathered water spots courtesy of the week’s rain, while a second team touched up the red interior accent paint. 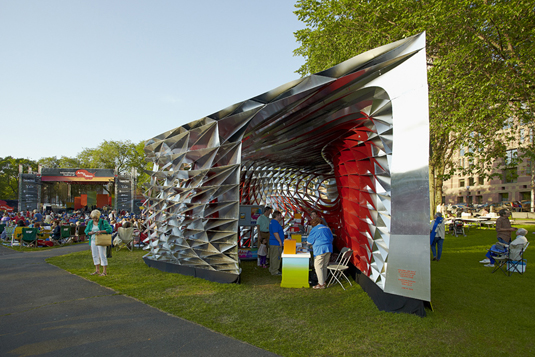 After our herculean team effort, the pavilion was finally ready. The completed structure performed almost flawlessly as an optical device. From certain angles it presented itself as entirely opaque, while from others the filigree lattice almost completely vanishes – an effect that we had carefully investigated through digital modeling and parametric scripting. The interior, rather than heating up under the intense afternoon sun, was well shaded and breezy. Festival volunteers were excited about the environmental qualities achieved by the designed permeability of the walls and roof. They were also delighted that the view towards the Festival’s Main Stage was unobstructed by its walls. 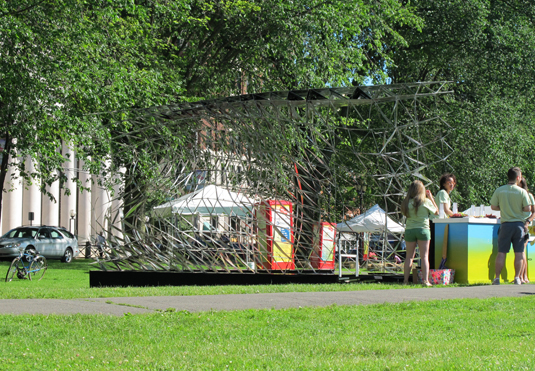 Festival staff, the design-build team, the press, and a curious public gathered at the pavilion at 4:30 p.m. on June 15 for the official opening. Brennan Buck explained the idea of our project to the gathered. In her speech Mary Lou Aleskie, executive director of the Festival, retold the story of our collaboration. She also revealed that recent community arts initiatives, including this project, had assisted in the Festival’s procurement of substantial private grant money to further improve its programming and image. And she acknowledged the generous contribution of Assa Abloy, represented by Marna Wilbur who expressed her firm’s support for architects and architecture. As the designers and builders, we were tremendously gratified and touched by the outpouring of interest and thanks.We also had the honor of cutting the ribbon. 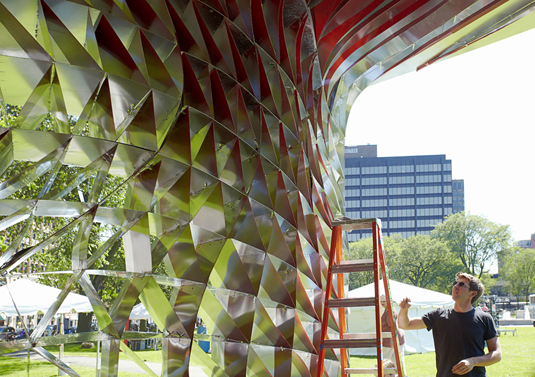 After the opening ceremony attendees and students and faculty from all Yale graduate and professional schools were invited to attend our opening reception, held at Bar Restaurant, New Haven’s purveyors of gourmet pizza and beer. We declared the event a success. Over 100 people came to see how the pavilion was made and to inquire about our design process, which was chronicled in a looping slideshow of photographs from conception to realization. For us, the event was a celebration of our hard work and dedication. The next morning we awoke to a photograph of our pavilion on the cover of the New Haven Register. Many of us on the design team spent time observing how people interact with the structure. Most interesting and gratifying to us are the public’s responses. Children are far and away the most curious and captivated of all.They like the shimmering effects of light and the bright red color. They enjoy the “peek-a-boo” quality of shifting opacity and transparency. They explore each triangular cell and say its aluminum panels resemble reptilian scales or a dinosaur. 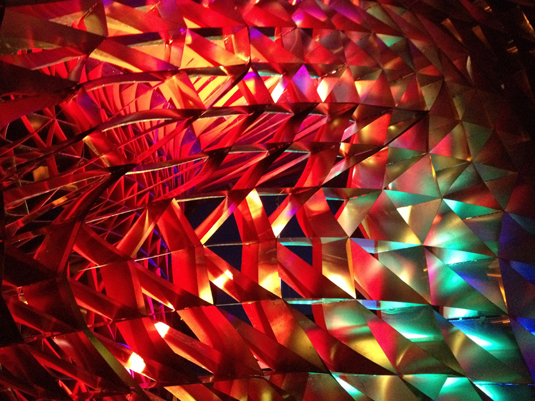 Some adults approach the pavilion with uncertainty and skepticism, while others think it’s “cool” and of genuine interest. For many at the Festival it is a “big silver landmark.” Still others pose more technical questions: Why doesn’t it crush under its own weight? How many pieces it is made of?  How many rivets did we use to fasten it together? Why don’t certain joints line up precisely? A few react with utter discomfort or think it’s absurd or even ugly — envisioned by a diabolical mind — while others think it’s indescribably beautiful. We welcome this range of responses because they all provoke a dialogue and debate about the role of design and technology in the production of something unique and undoubtedly assertive in its context. The pavilion provided us a means to test a range of experimental ideas and various strategies for assembly at a large enough scale to confront real-world issues, but at a small enough scale to manage reasonably. This was the real purpose of our folly on the New Haven Green. 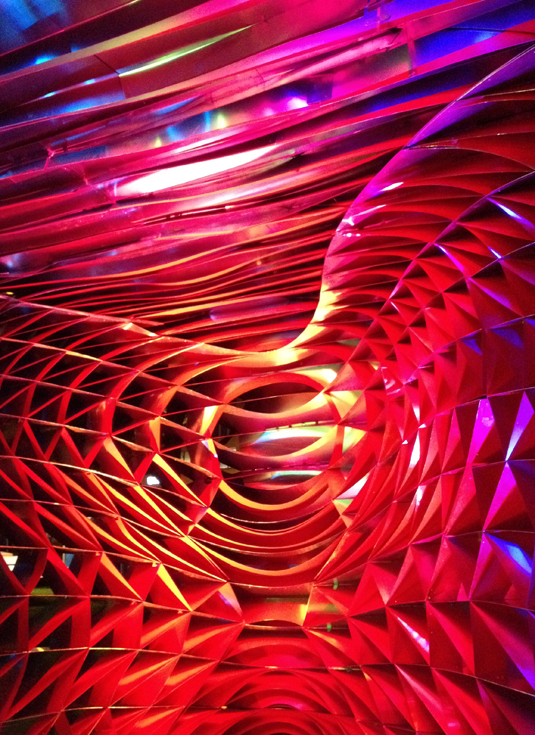 Now that it is complete and inhabited, we as the designers must revisit the issues that our experience forced us to confront. What does it mean for architects to be able to design and build a work of their own invention, and in the process, to learn about means and methods, manufacturing processes, mass customization, and structure? Have we moved the discipline forward at all or invented any new strategies – a protocol to engage the public perhaps? Is what we did successful or not, and if so, why? If it’s not, why not? What would we have done differently knowing what we know now?

Eric Zahn is a recent graduate of the M-Arch II program at Yale where he was awarded the Hilder Family Scholarship. Prior to attending graduate school, he worked in the Baltimore office of Ayers Saint Gross Architects and Planners. He received his B-Arch from Syracuse University in 2008, where he was awarded a Dean’s Thesis Citation and a Chancellor’s Award for Civic Engagement. This post is part of the Designing and Building a Pavilion series.