The new Broad museum shines in places, but ultimately suffers by adhering too closely to the strained rhetoric of its architects. 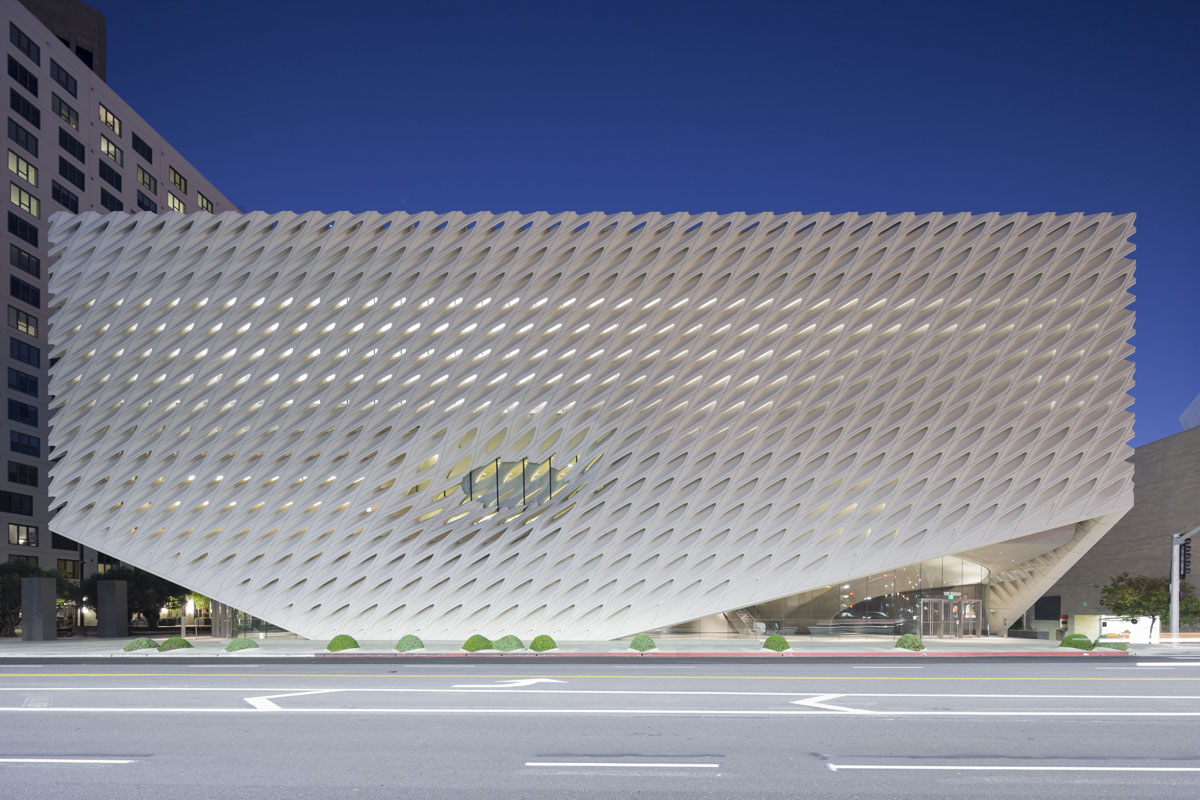 In 1979, Elizabeth Diller, still a student, had doubles on her mind. “This is a probe into the most fundamental relationship: that between two things,” she wrote in explanation of “Twin Houses for One Resident,” her Cooper Union thesis. If aspects of the project—expressive staircases, colorful axonometrics—reveal the influence of pedagogues like John Hejduk, the quixotic detail and burning drives are all her own. “It delves into a personal obsession,” Diller admitted, perhaps unaware of how difficult it would be to extract herself from this line of inquiry.

From Diller’s partnership with Ricardo Scofidio, begun around that same time, sprang dichotomies, lots of them. Art projects—Pleasure/Pain, Vice/Virtue, and Master/Slave—bear that out, but never so explicitly as the cover of the pair’s 1994 monograph, Flesh: Architectural Probes. On the front, one half of her nude posterior, smooth; on the back, one half of his, hirsute. Even when the addition, in 2003, of Charles Renfro as partner made cheeky symmetries like these impossible, concepts continued to take the familiar form of twos. “The building had to have a double vision,” Scofidio said of the Institute of Contemporary Art (ICA) in Boston, the architects’ first major museum, completed in 2006.

So it was only appropriate that, in 2010, Diller Scofidio + Renfro (DS+R) introduced its competition scheme for billionaire art collectors Eli and Edythe Broad’s new downtown Los Angeles museum with a binary: the veil and vault. Despite its overdetermined site—constrained below street level by a mandated car park, vertically by a 70-foot height restriction, and at its core by Frank Gehry’s intimidating Walt Disney Concert Hall, located immediately to the north—DS+R fused its fixation on doubles with the client’s two demands. One level above Grand Avenue would be storage for the Broad’s 2,000-plus works of contemporary art, and on top of that, a sprawling top-lit exhibition space. A striking, diagonally perforated skin would wrap the combined programs on all sides. Together these parts formed the “veil and vault,” a seductive verbal construction as much as a novel formal solution.

But five years on, the concept now a gleaming new $140 million institution named The Broad, that slick alliterative won’t go away. At the opening in September, the museum’s director instructed attendees how to navigate the “veil and vault.” When I inquired about the building, museum docents responded in the Broad’s familiar argot: veil this, vault that. It would amount merely to institutional branding if the architecture did not also conspire (and compromise itself) in this interminable endeavor to beat a narrative into visitors’ minds.

Wherever drywall occludes the veil one wonders if another metaphor weren’t more appropriate.

You need not have ever heard “veil and vault” to understand, entering at either corner of the building along Grand Avenue, that a play of contrasts is being performed. In each place, the glass-fiber-reinforced-concrete envelope has been sliced away at an angle, revealing it to be a container independent of its contents. Indeed, the second level of the building, the vault, approaches but does not quite come into contact with the veil—at least above the main lobby, where a structural cantilever and an uninterrupted coating of gray Venetian plaster support the illusion of a hovering mass. Slick floor-to-ceiling glass divides the sidewalk from the alarmingly spare lobby (roving staff check in visitors with iPads), but the grotto-like undercroft that runs from outside to inside and arcs down to the ground creates the feeling you have not yet entered. This ashen, amorphous surface is a kind of facade, and, in an architectural come-hither like no other, an escalator and a staircase protrude through and extend suggestively past it, beckoning you to experience the museum—or ride the circulation.

The escalator ascent takes precisely one minute and draws out the transition between two distinct moods: the dimly lit lobby and the 35,000-square-foot, clear-span gallery bathed in northern light let in through the apertures. As you emerge through the middle of the floor, head angled upward, the glowing, honeycomb-pattern ceiling mesmerizes. Like Jeff Koons’s flawlessly fabricated Balloon Dog (on display), the surface—dense with hefty beams that span the entire room—is supple and plush.

The ceiling, the Broad’s most phenomenal feature, stakes claim to a space that must otherwise be unhindered by architecture—that is, able to be partitioned as the curators see fit and generic enough not to compete with the art. In fact, even the patterned skin that wraps so conspicuously around the exterior and looms so large in the Broad’s self-image is prohibited from making an appearance inside, except where it abuts Grand Avenue, perforations allowing periscope-like views on the street. Wherever drywall occludes the veil—on the three other walls of the square gallery—one wonders if another metaphor weren’t more appropriate. Or, considering how disruptive language becomes as you progress through the building, dispensed with altogether.

A concept as black-and-white as veil/vault proves to be a knot too tight, so inflexible it’s self-defeating.

While a circular, glass-encased elevator is available, the route the architects prefer you take down to the lobby is a staircase that switchbacks through the “vault.” At two of its landings, body-length windows offer humdrum glimpses into the institution’s art storage: Placed more or less on top of one another, they duplicate views of one part of the painting repository. And whatever sense of mystery and voyeurism the low, dark staircase manages to evoke is interrupted by curiosities of a more practical order, as one veers off course to peruse the administrative offices, lecture hall, and the bathrooms. These are integral features of any museum, but for one in which movement progresses as if scripted, and where metaphor is made moody environment, their appearance has a deflating effect.

No part of the Broad is flawed because it fails to conform to the tidy “veil and vault” scheme, to language. But most of what is unsatisfying and clumsy about the museum seems a result of the client and architect’s intrigue with that simile. While a strong idea may provide an essential tether to a design in the course of its execution—keeping compartmentalized decision making in check—a concept as black-and-white as veil/vault proves to be a knot too tight, so inflexible it’s self-defeating.

Take the envelope, which underwent significant revisions after it proved unbuildable. Except along Grand Avenue, the concrete panels are almost entirely opaque and, rather than standing loose and relaxed, cling stiffly to the side of a box as a flowing dress does to a body in the right humidity. Or consider the ground-floor gallery, a ponderous 15,000-square-foot backroom that feels like an afterthought, if not an intentional retreat from the architecture’s machinations. The 200-seat lecture hall, a lackluster venue for public events repressed within the vault, would have been better suited elsewhere had the building concept encompassed anything besides exhibition and storage, or duos.

Yet, even as the Broad deals in decades-old obsessions, there are indications that DS+R is moving in new directions. Where, for instance, are the screens—the ones so prominent in the ICA, Lincoln Center, and Brasserie? Where is the frosted glass? Where are the scrolling LEDs? Gone are practically all the gizmos that functioned as the firm’s signature, gesturing anxiously to its artist days. Upstairs, under that light, I think I divined DS+R’s future. It’s more subtle and stirring than past work, but who better to make a career out of contrasts? 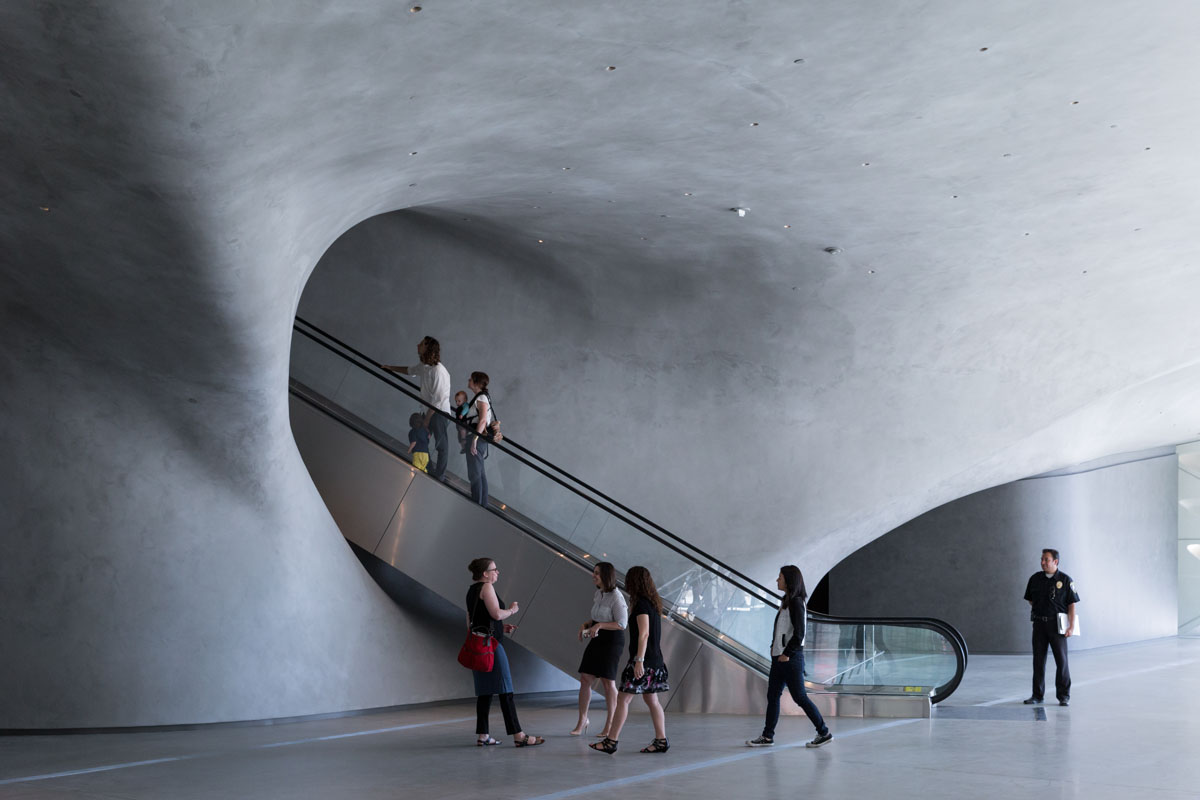 The entrance lobby is defined by a dark amorphous mass that looks like sculpted concrete but is actually drywall. 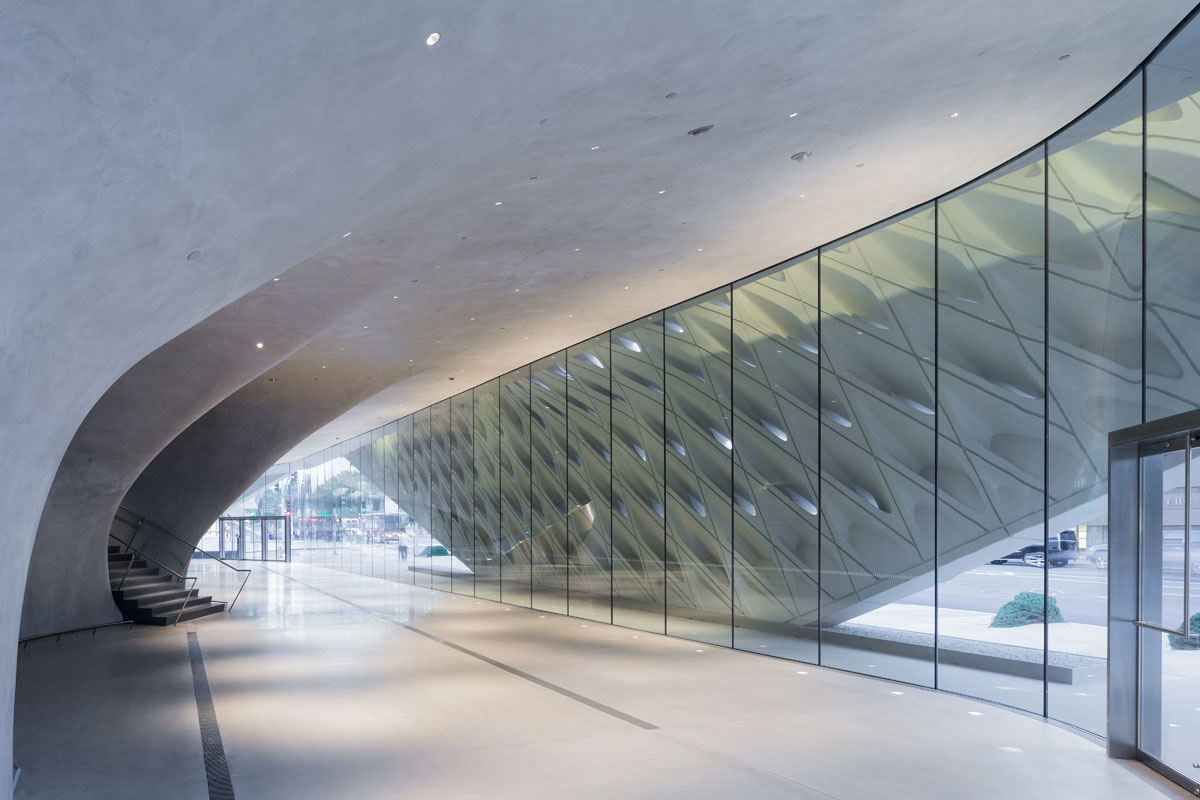 The building’s two components—the veil and the vault—are set in dramatic contrast in the sparse lobby. 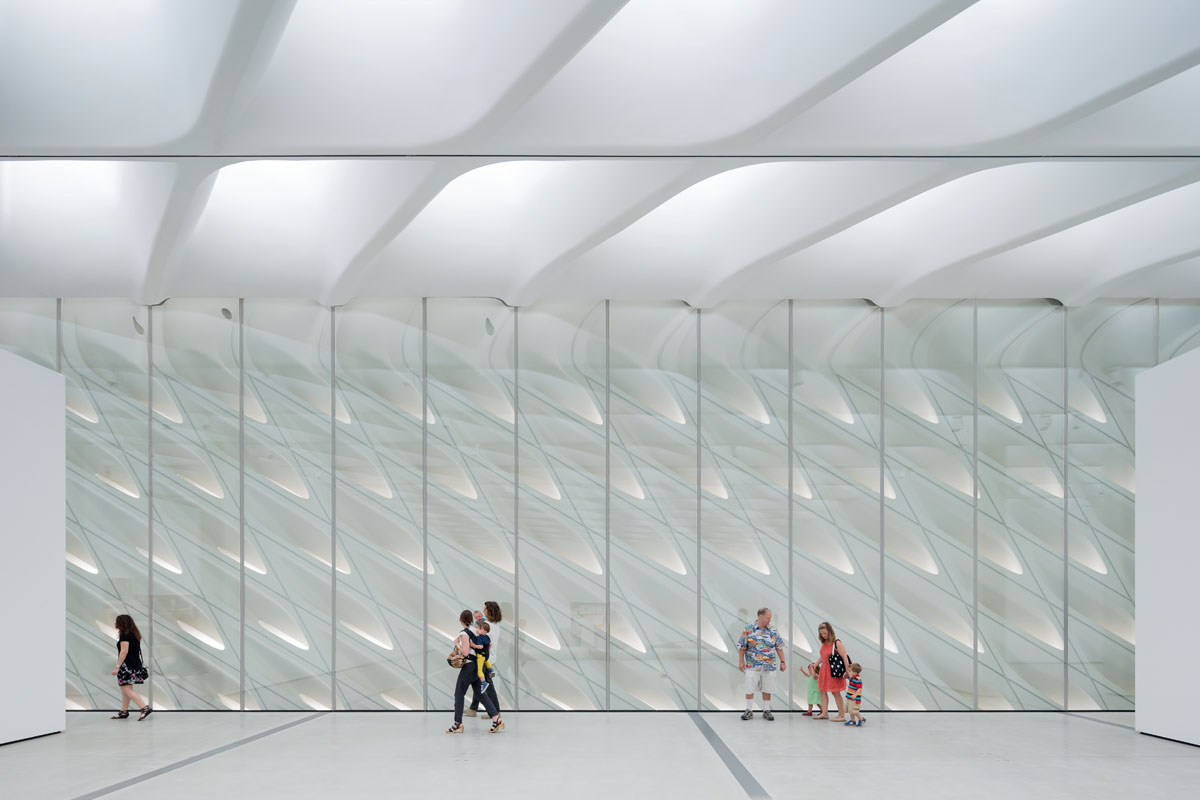 The veil rises up and over itself in the top-floor, clear-span gallery. 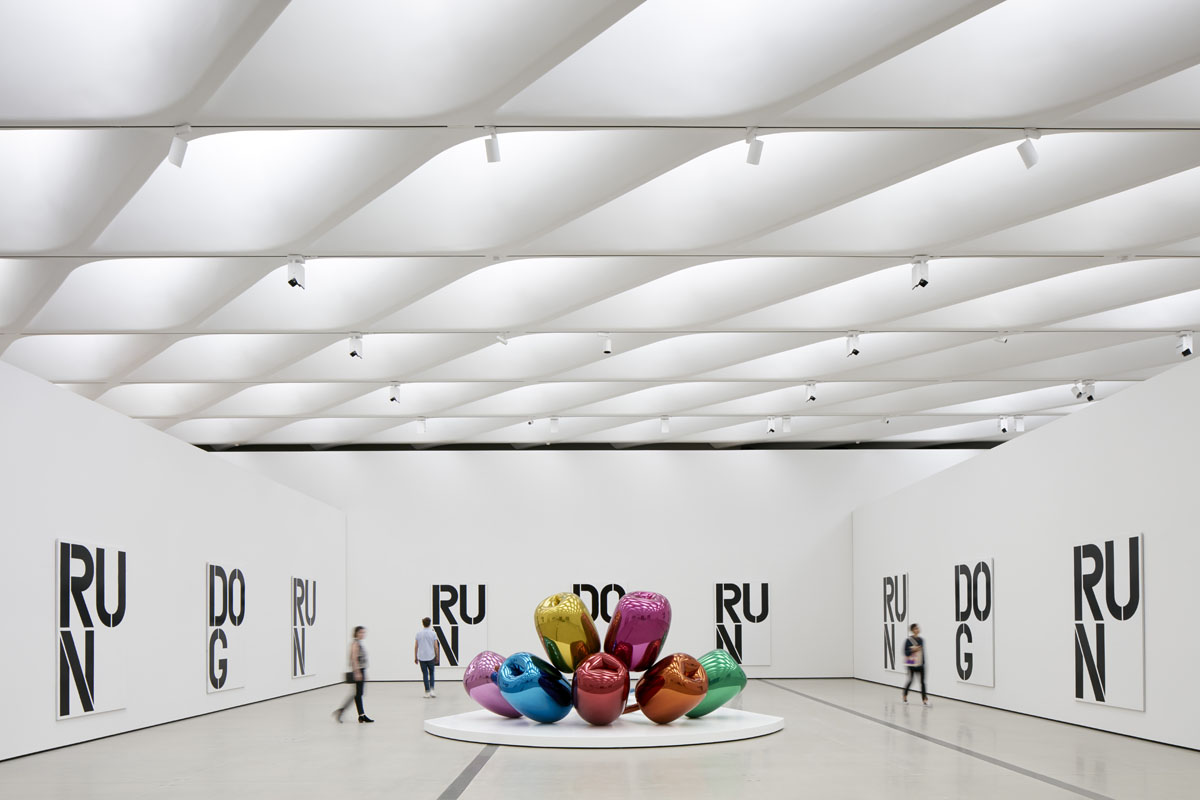 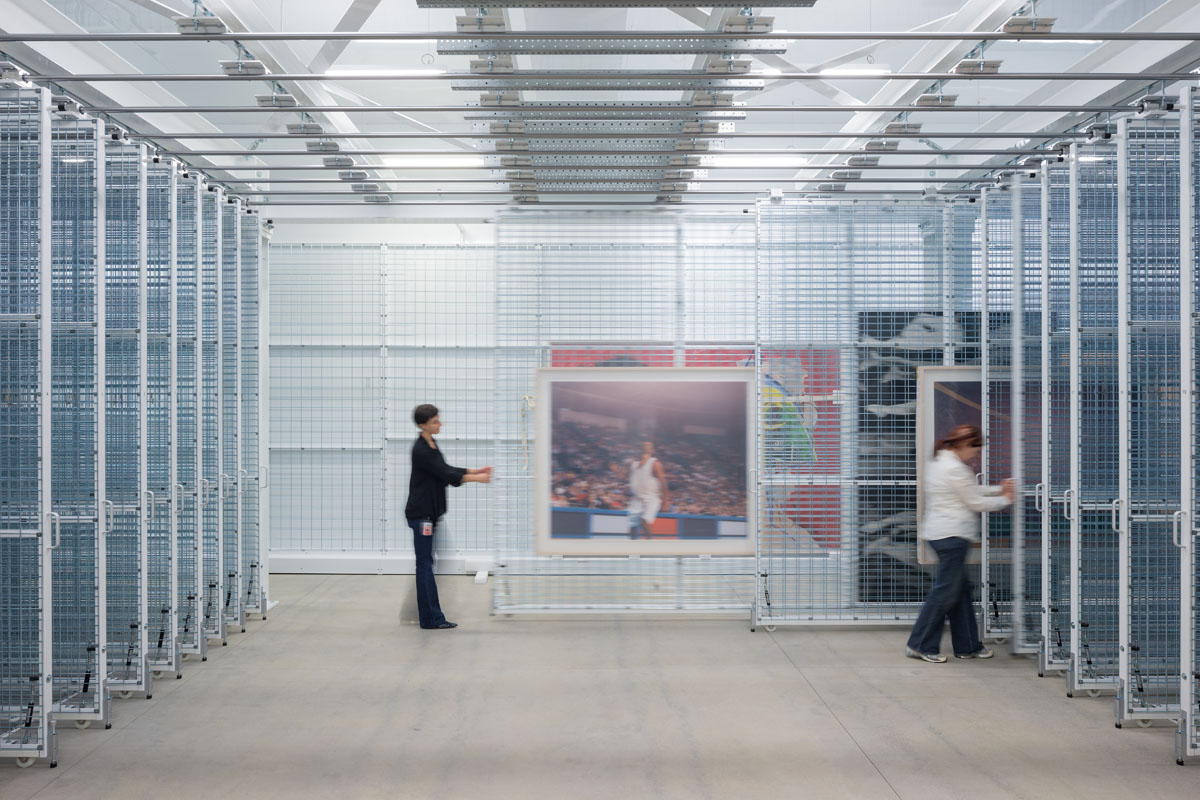 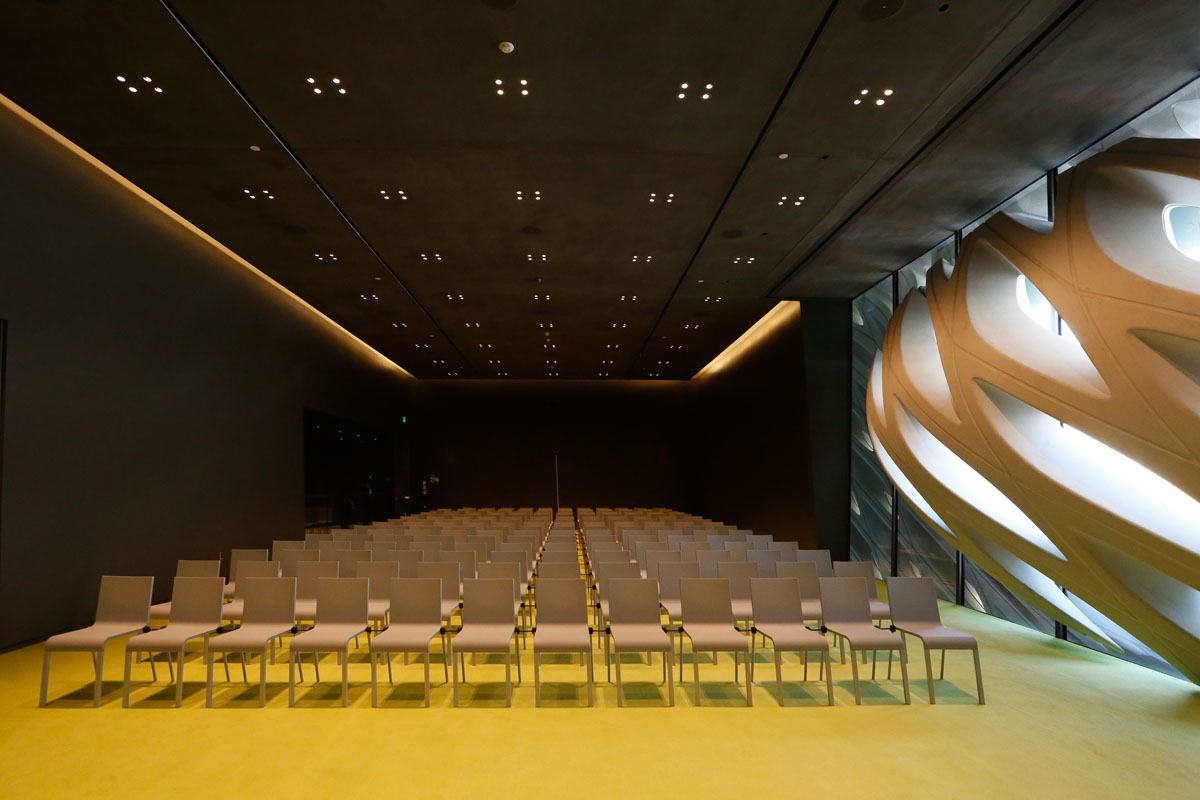 The diagrid-like patterning of the veil is broken by a dimpled opening, called the oculus, which marks the location of the dull, 200-seat lecture hall. 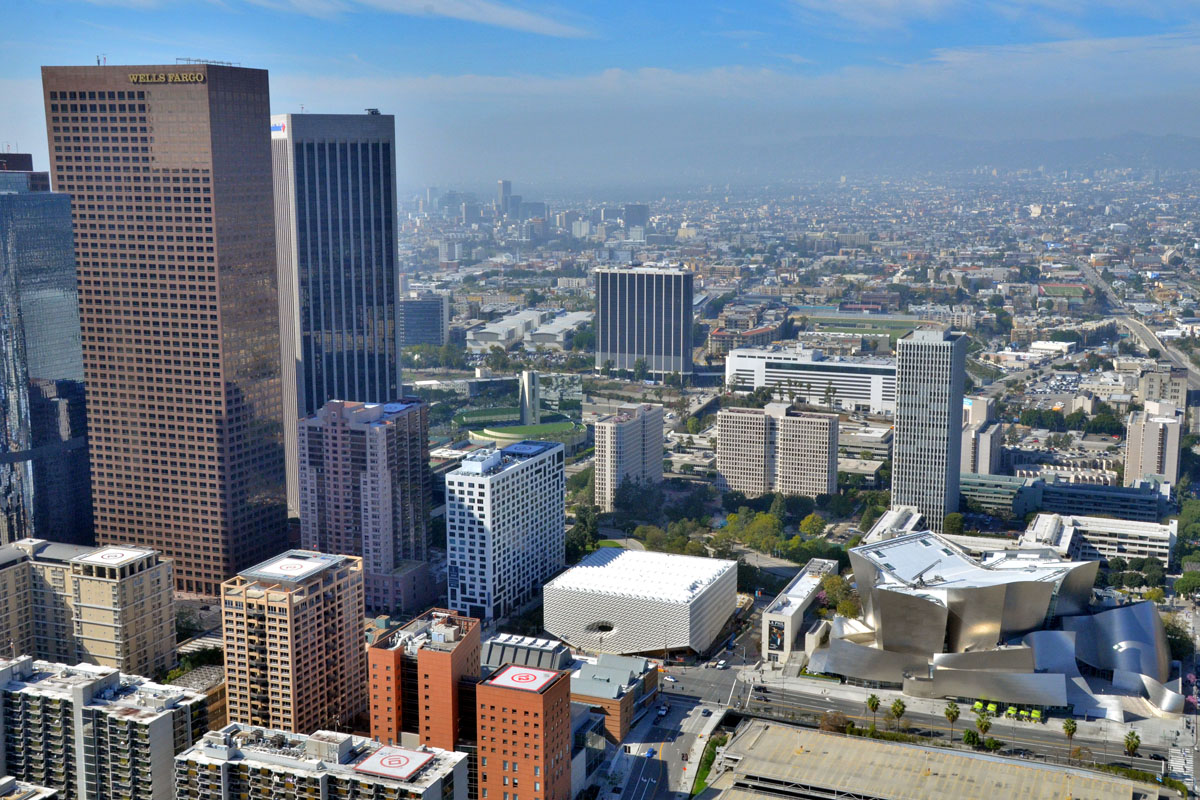