Museum seen from the waters of Biscayne Bay

A year after my first visit I went back to check the progress of the new Miami Art Museum (MAM). This time Jacques Herzog himself lead the tour of the Herzog & de Meuron project, with Christine Binswanger, senior partner accompanying him. Their insights on the design and seeing the construction closer to completion, gave me a comprehensive view of how the building is shaping up. 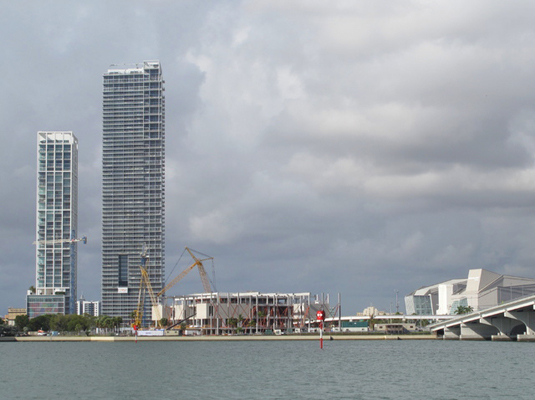 Museum seen from the Bay, with Highway 395 and Cesar Pelli’s Theatre of the Performing Arts to the right , and Biscayne Blvd condos to the left.

The first thing I noticed was how well MAM connects with its context, both the natural and urban, inside and out. The site is an architect’s dream. It’s a privileged piece of land, bordered on the south by the verdant Bicentennial Park and downtown, on the west by the city and, eventually, by the new Miami Science Museum; to the north by the 395 freeway and MacArthur Causeway leading to Miami Beach, and to the east the back of Biscayne Bay at the exact spot where the cruise ships docking at Port of Miami maneuver upon arrival. Just standing there makes you feel full of energy and vitality! 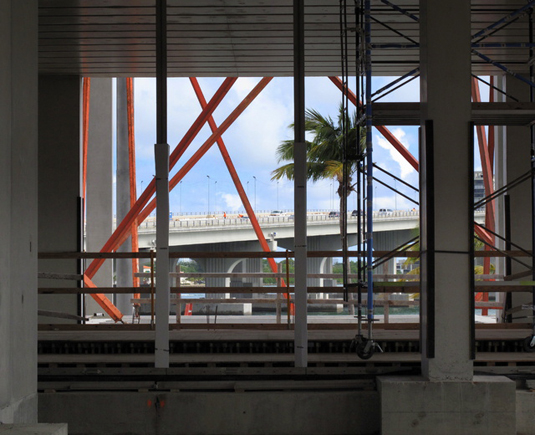 View looking out at MacArthur Causeway 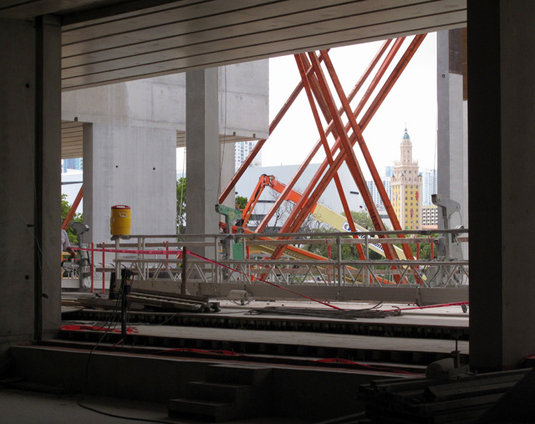 Looking out, from deep inside the museum, with Freedom Tower in background.

A building inserted into such a site needs to hold its own and yet not be a carnival ride full of bells and whistles. This is no easy task. But this is what exactly what the architects seem to be accomplishing. When I asked Thom Collins, the museum’s director, what had surprised him most upon seeing the building take shape, he told me: “ There’s no place inside, whether a gallery or hallway, where you can’t look to the outdoors in at least two directions.” Indeed, the vistas are presented at every opportunity, yet they’re not distracting. I imagine that when completed, these rooms, though they will certainly be fit for the introspection required to connect with art, will have a more airy, inspiring feel than other somber, taciturn museum galleries. This couldn’t be more appropriate for a city like Miami, where just a single glance at the expansive sky and the ocean can evoke a fresh perspective, both literally and metaphorically. 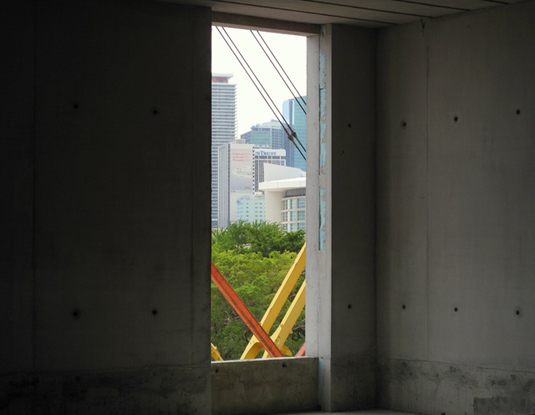 Window opening with view of American Airlines Arena, by Arquitectonica and dowtown. 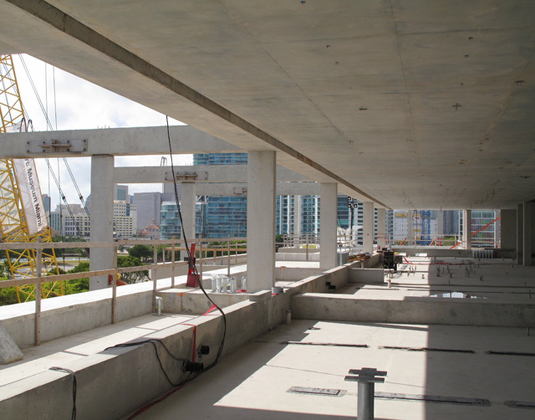 View out South from top floor, looking into park and downtown.

From the outside, too, the building’s connection with the surrounding is clear. Christine explains this as she speaks of a structure that’s inviting; its slender columns, long overhanging beams that reduce how we perceive the total mass. The resulting dialogue of mass and structure gives the project a feel of being more like a large, breezy pavilion than a 120,000 square foot, world-class museum. 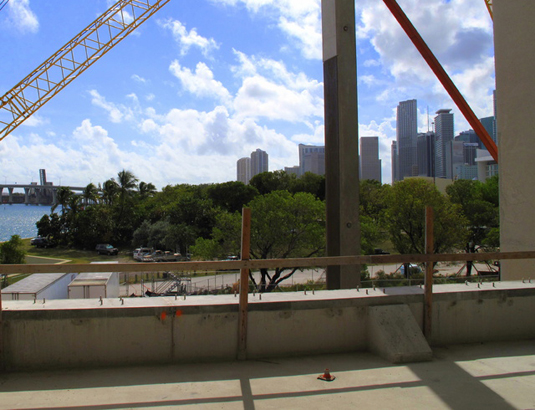 Looking South, Biscayne Bay to the left, Bicentennial Park at Center, downtown Miami to the right 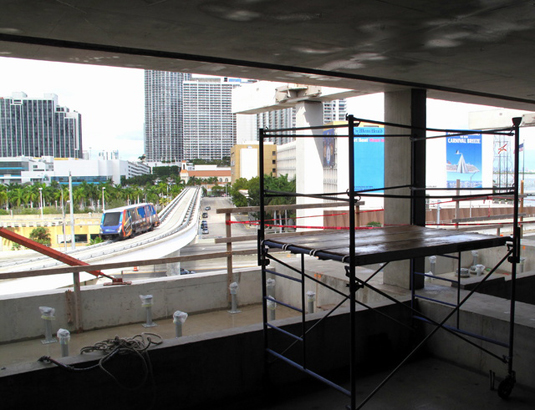 Looking North, Metromover track and car to the left, Miami Herald Building to the right.

The famous year-around South Florida weather makes it possible to put the exterior space to good use. There will be outdoor areas for art exhibits, educational activities, dining, and simply relaxing (the outdoor area adds 80,000 square feet to the museum, bringing its total programmable area to 200,000 square feet. In addition, how the architects provide for that most ubiquitous Miami element, the car, is worth noting. Cars are brought into the parking area under the building and clear the way for the grounds’ multi-purpose use. 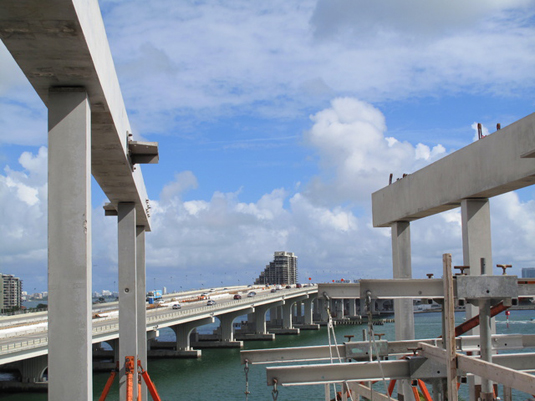 View East, with loggia terrace structure in foreground and MacArthur Causeway in background.

Miami is a city where high-profile architecture is usually associated with splashy shapes and colors and Disneyesque “themes”, as a quick survey of the museum’s neighboring buildings confirm : the Mediterranean Revival Freedom Tower, the dynamic American Airlines Arena by Miami’s own Arquitectonica, plus Cesar Pelli’s  angular Adrienne Arsht Center for the Performing Arts of Miami-Dade County and a wall of shinny undulating curtain wall high rise condos. But Herzog & de Meuron went a different route. Instead they opted to mesmerize us by creating a space that deals a new way with the challenges of a tropical climate and culture. This is a building, that when it’s completed (scheduled to open Fall 2013), will invite guests in more by what it doesn’t show, than what it does. It will bring the city in for an experience, while giving it a chance for an inspired look back at itself. Just as good art does. 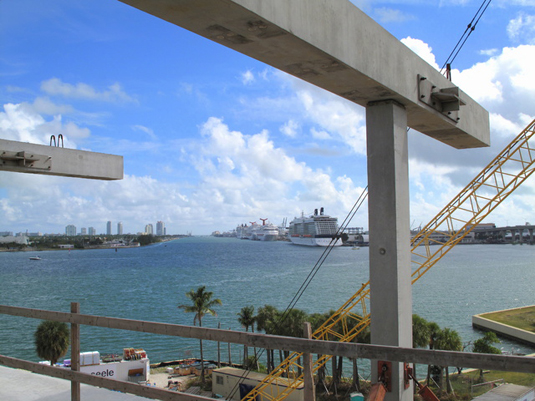 View East, from South side terrace, with Government Cut and Port of Miami at center, MacArthur Causeway to the left and South Beach in the background.