In San Antonio’s newest historic district, a strikingly renovated hotel allows some grit in its glamour. 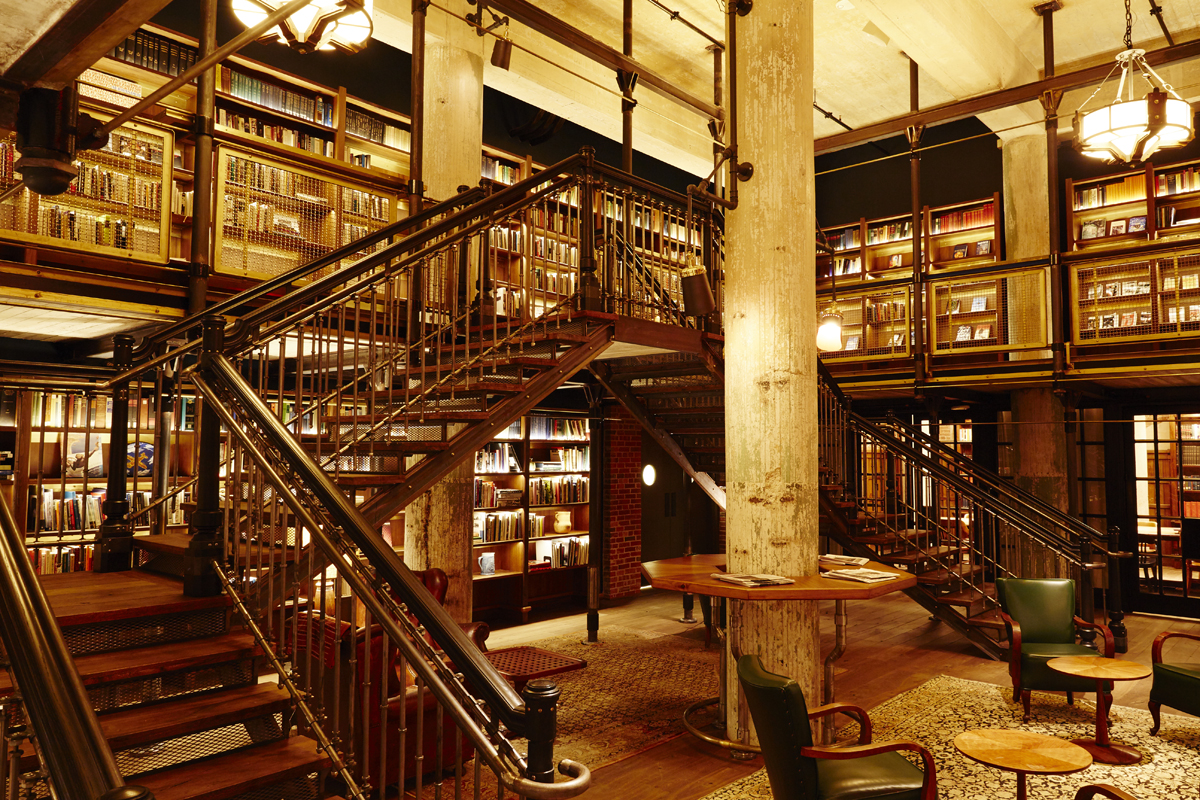 Upon arriving at the hotel, guests are invited to enjoy a margarita in the library.

As you wander the lofty halls of Hotel Emma—located in the former Pearl Brewery in San Antonio—you get the distinct feeling that you’re walking through the grand manse of a wealthy friend. While you never actually catch sight of your benevolent host, they remain ever present—through macarons left with a letterpressed note, vintage objects acquired through travels, and obscure tomes piled on side tables as if left midsentence.

If that host took on an identity, it would likely be that of the hotel’s namesake, Emma Koehler, wife of Pearl Brewery president Otto Koehler. Following her husband’s death (he was murdered by his mistress, also named Emma), Emma took control of the brewery in 1914 and kept it afloat during Prohibition by running dry-cleaning and auto-repair operations and manufacturing ice cream, soda, and near beer. It shuttered in 2001, but the Pearl Brewery district has recently been converted into a mixed-use development by local architects Lake Flato, with Hotel Emma the jewel in its crown.

Occupying the historic cupola-topped brewhouse, the 146-room establishment opened in November 2015 and has already earned San Antonio a newfound design credibility. True to the modus operandi of its interior designers—Robin Standefer and Stephen Alesch of New York–based Roman and Williams—Hotel Emma’s aesthetic is intricately layered. Whereas the design narrative of most hotels can be gleaned within a few quick glances, this one makes itself known gradually throughout your stay.

With its balance of grit and glamour, the design reanimates the building’s fascinating past while putting forth an entirely fresh personality in an irreverent blend of discovered and bespoke objects that reflect the region’s culture. “Trade routes from Mexico and South America passed near here and cross-pollinated with a longing for some of the refinements and graces of the East and Europe,” says Standefer. “When guests come here they want to have a sense that they are in San Antonio— they want to see these deeply rooted influences.” Adding to the extensive gathering of rugs, vases, and other curios, embossed leather walls in the elevators are an especially evocative touch. 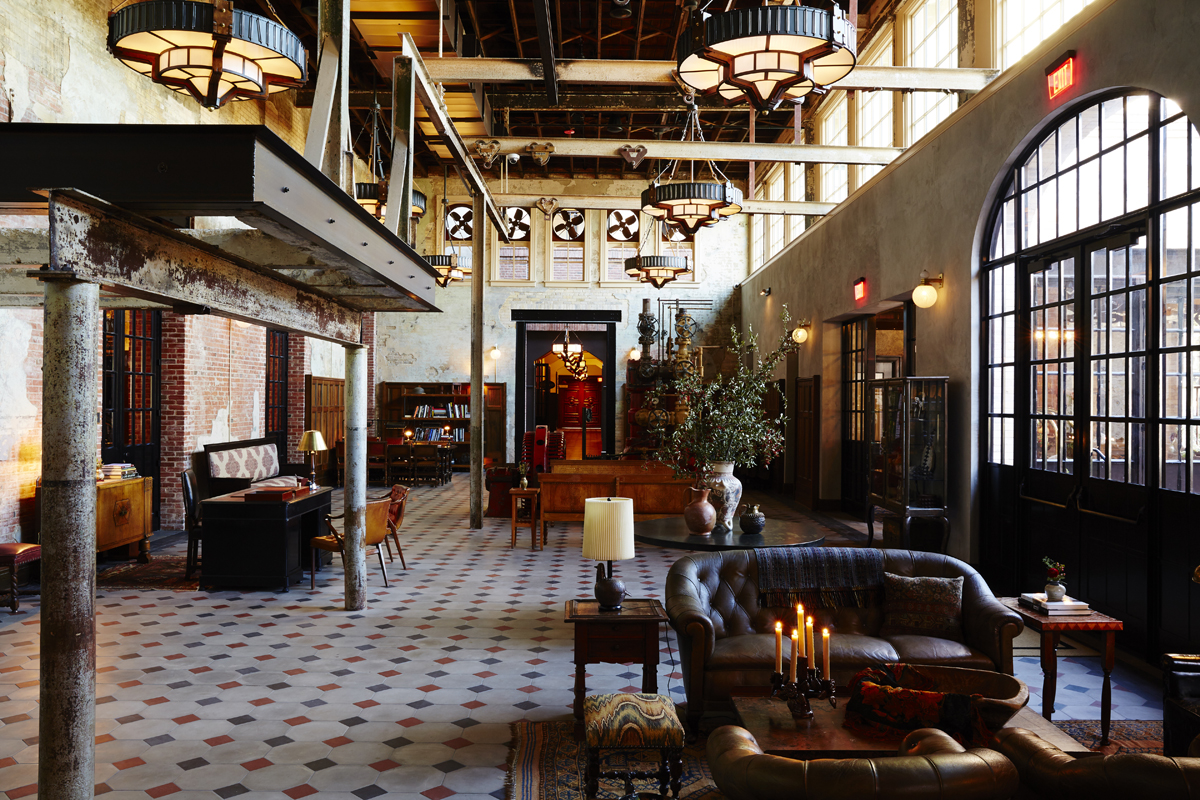 The Redondo tiles in the lobby are replicas of those unearthed during the renovation.

Prefaced by a large patio and a woodburning fireplace, the lobby (once the brewery’s engine room) stretches sufficiently to allow a good game of hide-and-seek. Grand brick archways, metal beams, and wooden rafters anchor the space while ample seating, from voluminous leather lounges to stately reading desks, means guests need never fight for a perch during the morning’s complimentary pour-over service.

The true treasures, however, sit behind a set of glass doors in the hotel’s library. It’s a far cry from the paltry gathering of design tomes that constitutes the “library” in most hotels—each edition on the shelf comes from the personal collection of 79-year-old local Sherry Kafka Wagner. Looking to downsize the motley accumulation of books in her house, Wagner jumped at the chance to give them new life at Hotel Emma. “I’m not a book collector,” she says. “They are kind of the fallout of my life. I’d get interested in something and buy books about it.” She visits the hotel weekly to tidy up the books—which range from a rare volume on Louis Kahn sketches to a first edition of Truman Capote’s In Cold Blood—and to shuffle those on display to appeal to particular guests staying in the hotel.

Hotel Emma’s resident restaurant, Supper, has proved a hit with locals, as has its gourmet provisions shop, Larder, which serves light bites and coffee and stocks other culinary delights. A small boutique, Curio, offers signature items found in the hotel (such as Dos Carolinas guayabera-inspired seersucker robes), plus goods by local artisans. The bar and clubroom, Sternewirth, takes its name from the Sternewirth Privilege, a 19th-century brewery tradition that gave employees access to free beer in the taproom during their workday, provided they didn’t get drunk. Presiding over the space are three old 10,000-gallon fermentation tanks, two of which now have cozy banquette seating inside.

For Roman and Williams, much of the hotel’s beauty exists in details carried over from the original building. “It was a big, cold, dusty, and abandoned place of such character on its own that we didn’t want to erase it or the things we all loved about it—its rawness and romance,” says Alesch. And that depth of experience simply cannot be faked. “We found incredible brick with layer after layer of paint. It’s as inspiring and spontaneous as a Cy Twombly, but instead of being the work of one artist, it’s made by a century of use.” 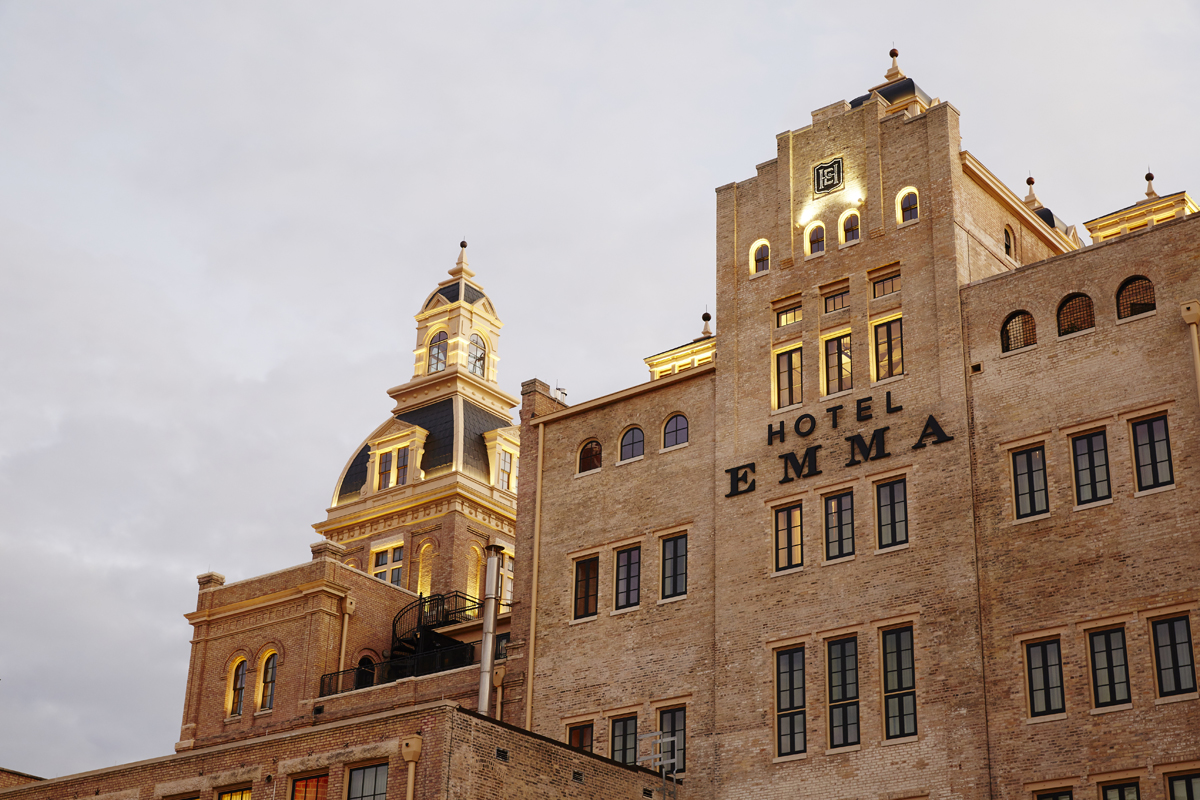 The Pearl’s brewhouse was built in 1894 and designed by Chicago architect August Maritzen in the Second Empire style. 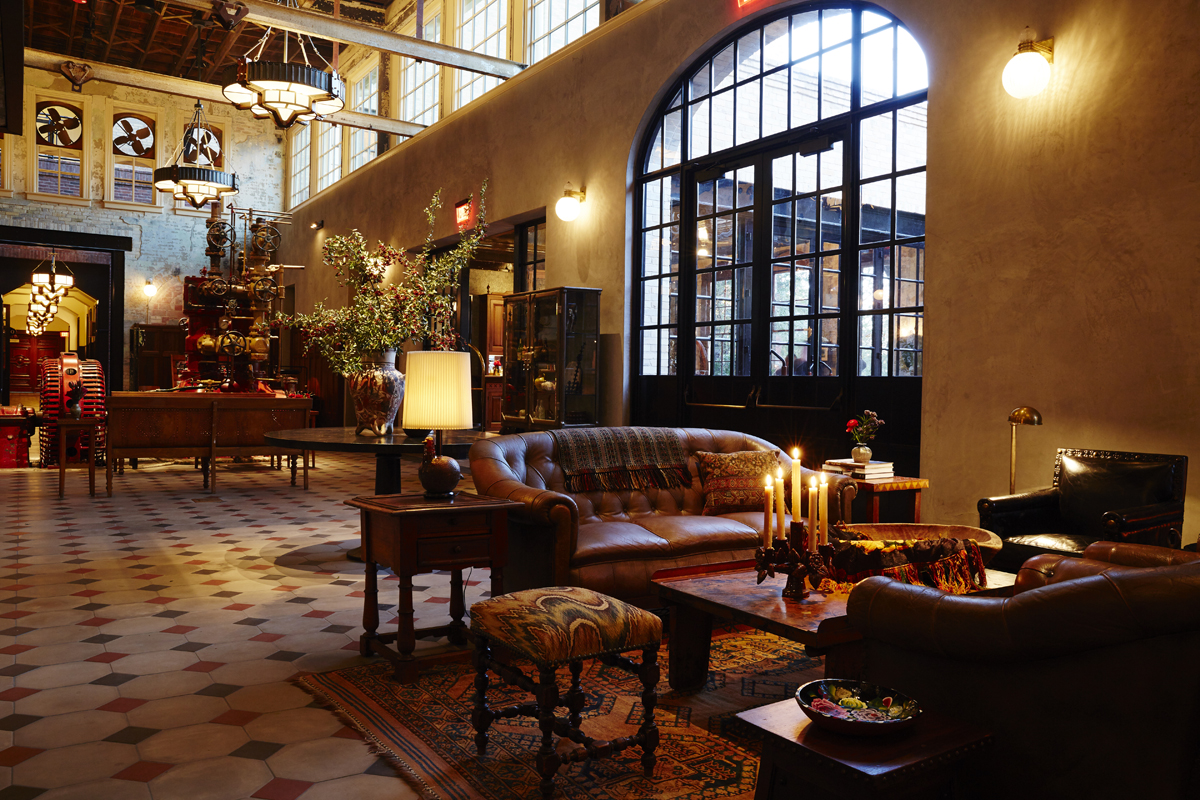 Original exhaust fans and an old ammonia compressor in the lobby pay tribute to the building’s industrial past. 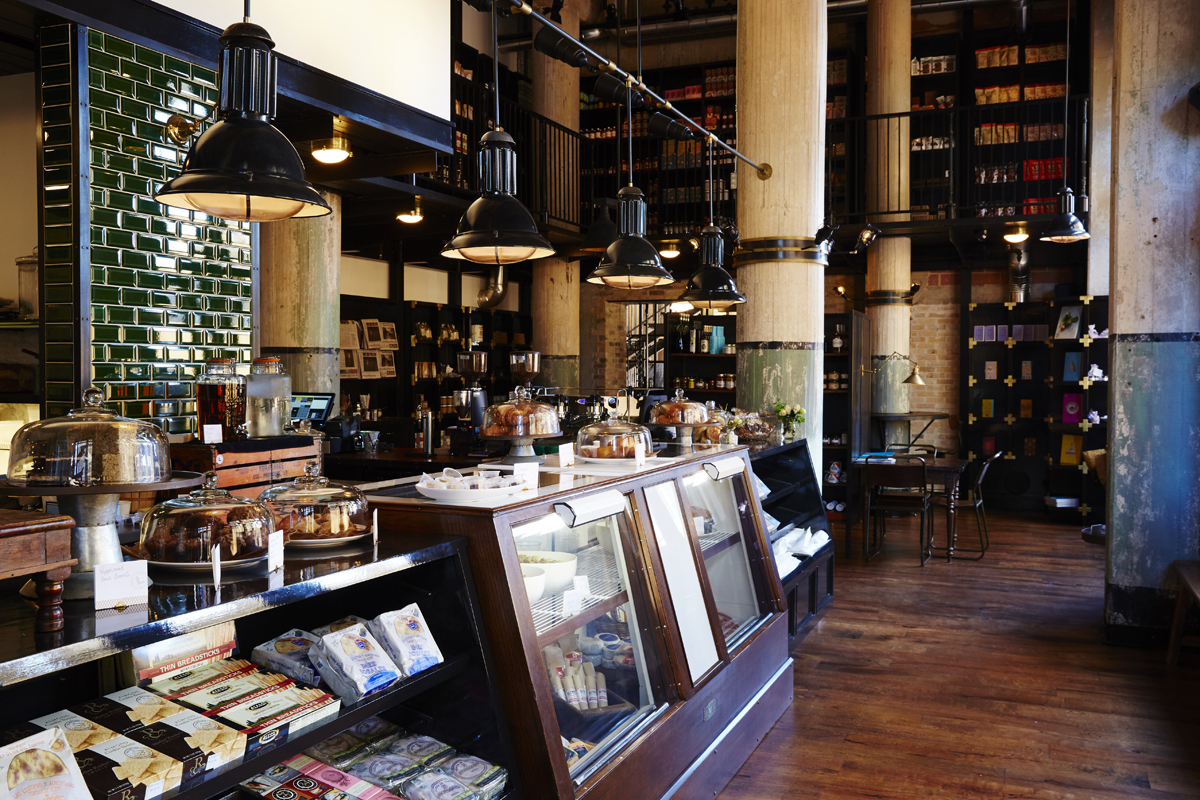 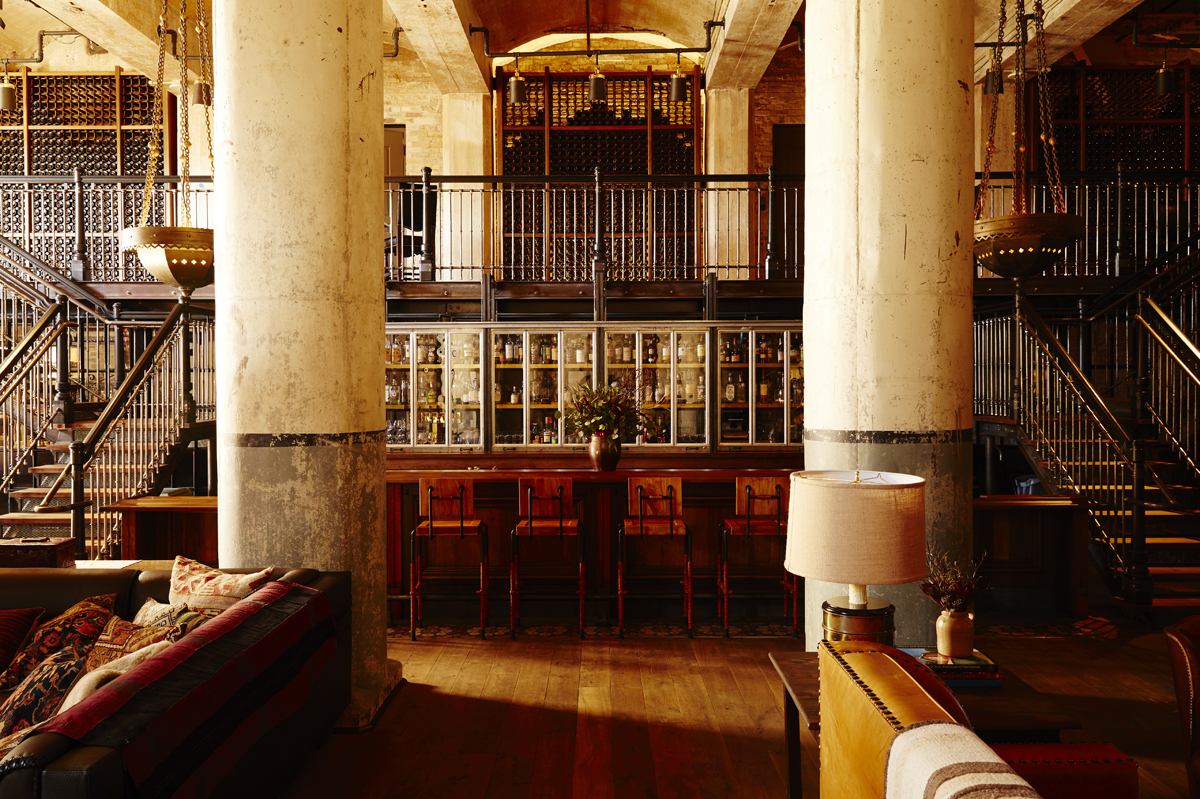 Guests can also venture the extra few steps to try the house specialty cocktail, the Three Emmas, in the Sternewirth bar. 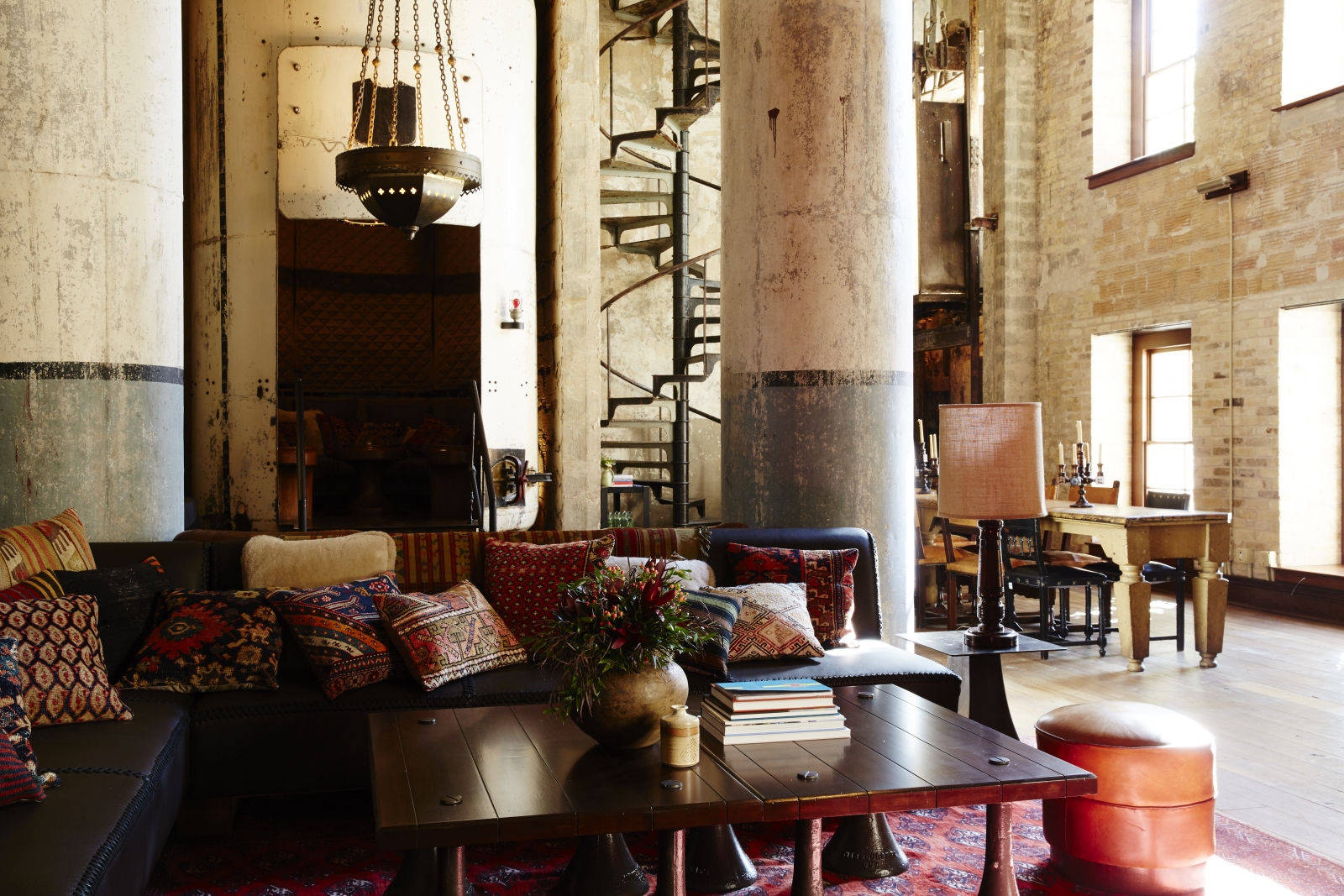 The lounge features an original spiral staircase from the building’s days as a brewery. 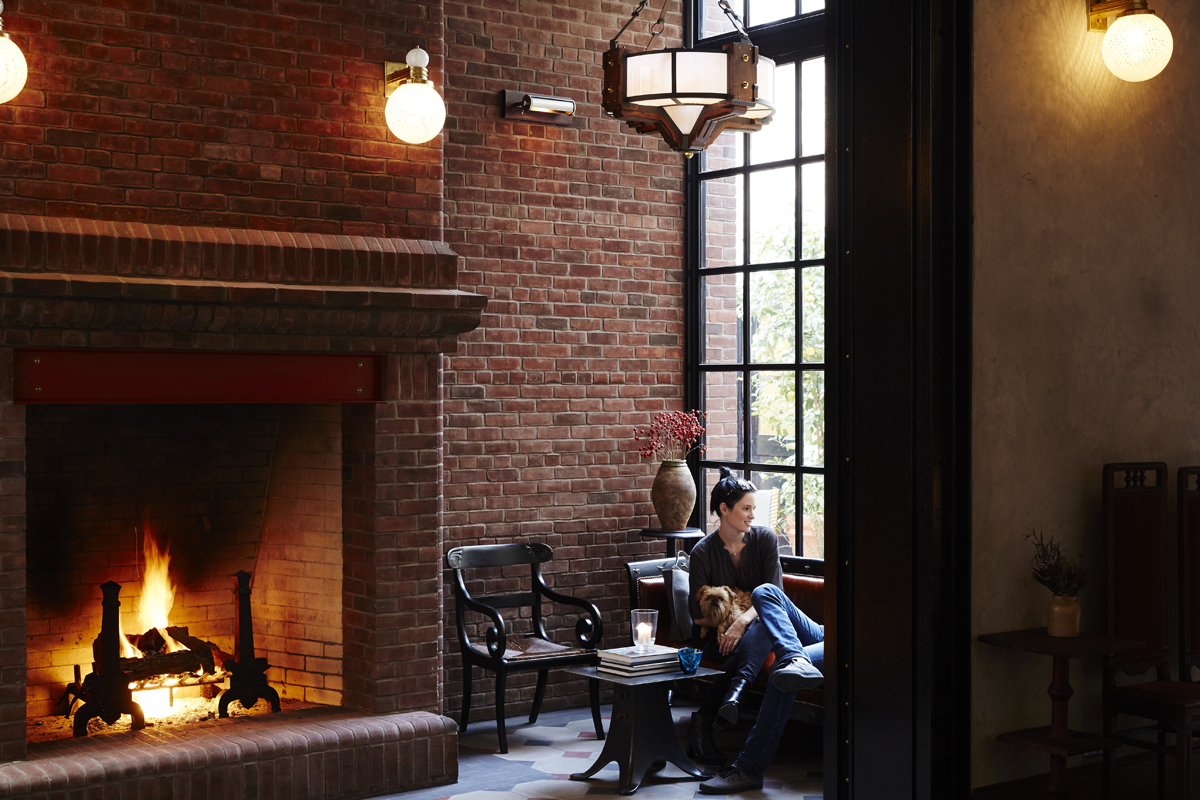 A mighty fireplace forms the hearth of the lobby. 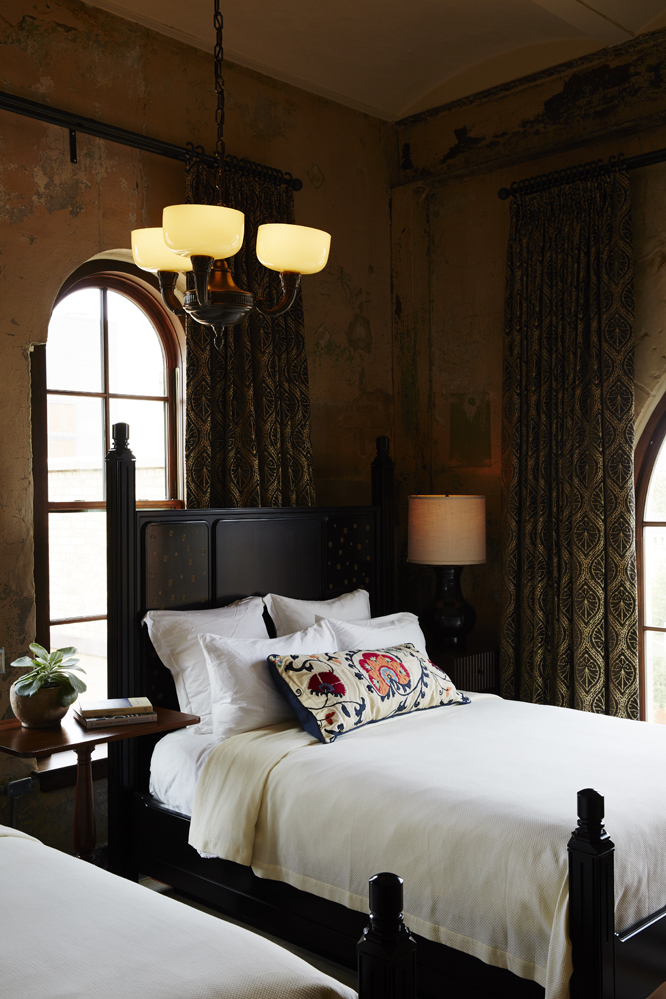 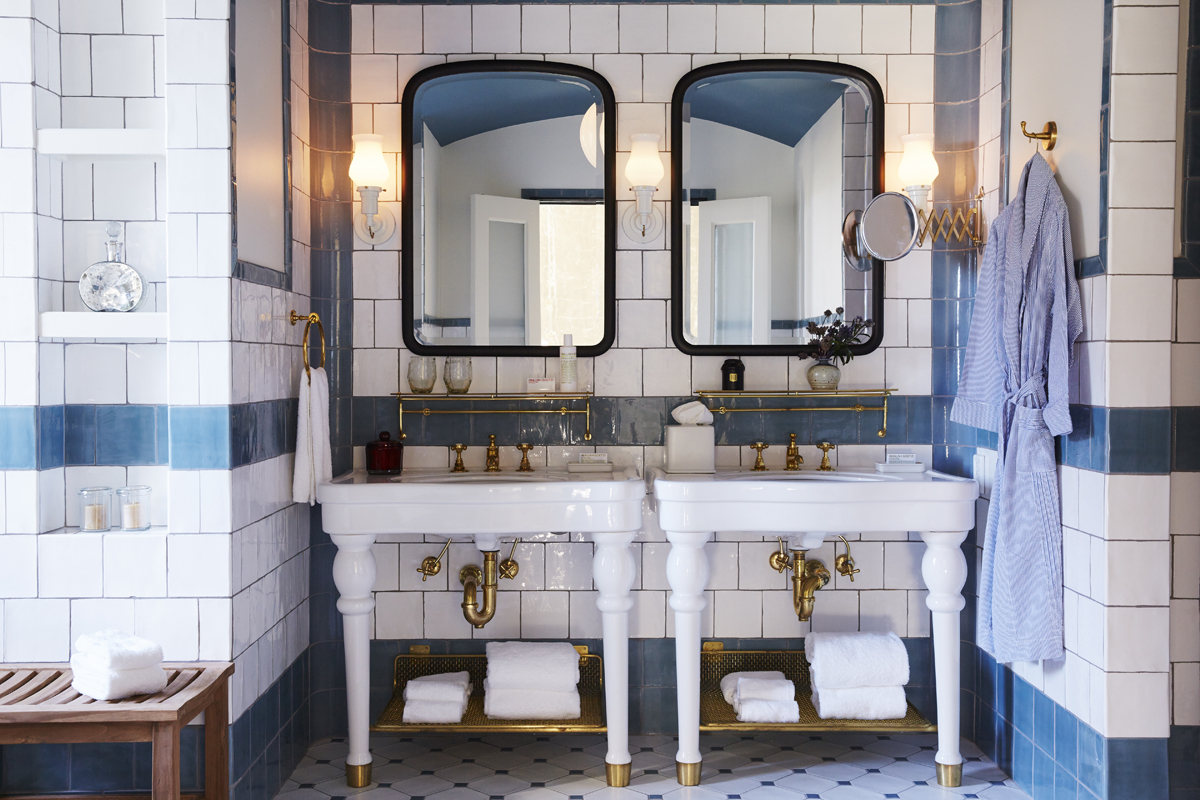