The New York architect Alexander Gorlin discovers Kabbalah imagery in the architecture of modernists like Louis Kahn and Le Corbusier and in the art of Mark Rothko.

The New York architect Alexander Gorlin has just released a new book Kabbalah in Art and Architecture (Pointed Leaf Press). It’s a serious but lively look at Jewish mysticism, supported by an archive of reference material Gorlin has been compiling for over twenty years. Gorlin delights in making visual connections between art and architecture (both historical and contemporary) and the ancient mystical texts. He calls out so-called rationalist architects like Le Corbusier, who he says actually harbored quite the mystical streak. He also divines kabbalistic allusions from Rothko canvases and Barnet Newman sculptures. The book, designed by Stafford Cliff, is also a visual feast, packed with large, full-bleed images that have an undeniable impact. I recently talked to Gorlin about this long secret project.

Alexander Gorlin: I’m a closet mysticist! I knew this would be the reaction of most of my friends and colleagues as this all was done under the radar, sotte voce for many years. It has its roots in my early interest in myth and architecture, in the work of Mircea Eliade and Carl Jung’s Man and His Symbols and William Lethaby’s Architecture, Myth and Mysticism. In fact it was in the book, Five Architects that Eliade’s The Sacred and the Profane was cited in relation to the work of Michael Graves. (Of course Graves took Eliade too literally, draping fabric in a showroom like the tunic of the Virgin Mary at Chartres Cathedral!) The late seventies in New York were characterized by the postmodern plunge into myth as a basis for architecture. I became fascinated by Joseph Campbell and Hindu mythology as a means of interpreting Le Corbusier’s work in Chandigarh, especially his Governor’s Palace, of which I had built a huge take-apart model (now in the permanent collection of MoMA) while at Cooper Union. I discovered all sorts of strange symbols from the Kundalini yoga diagram to the sign of “OM” in the plan and section of the building. All of this was published in 1980 in that obscure architectural mag, Oppositions. I also wrote in 1984 for Yale’s Perspecta, “Le Corbusier and Surrealism”, where I demonstrated that despite Le Corbusier’s rational public persona, he in fact drank the kool-aid of myth and mystery as early as his Beistegui roof terrace, eventually culminating in the anti-rational curves of Ronchamp. So, if you scratch even the most rational modernist (apart from Mies, I suspect) you will get a wild romantic poet underneath. 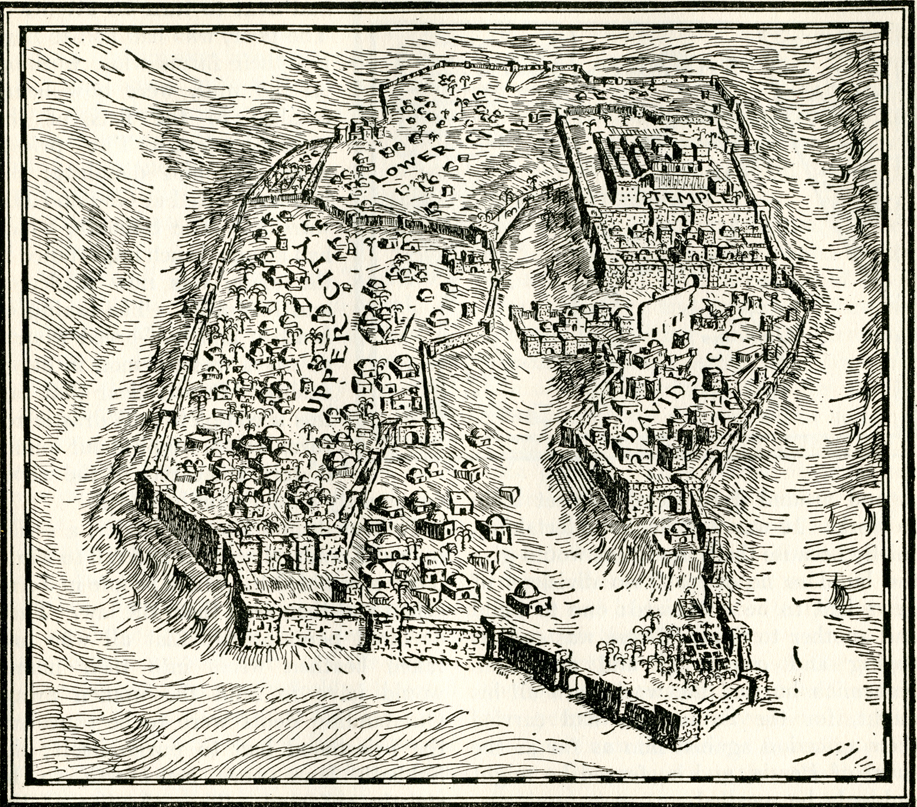 A map of ancient Jerusalem drawn by the artist Mark Rothko whose work, Gorlin contends, makes reference to themes found in the Zohar, the found literature of Jewish mysticism.

MCP: How did the idea for the book take shape?

AG: I was working on a synagogue in Kings Point, Long Island and knew I didn’t want to do a historical “pastiche” or hackneyed 1950’s “burning bush” motif, so I happened upon the work of Gershom Scholem, the great Kabbalah scholar. In his books I discovered a number of esoteric concepts that inspired the design of the synagogue from the overall shape to the details. Gradually, I found that a number of artists such as Barnet Newman in the 1950’s and Anselm Kiefer had been using explicit Kabbalistic themes for years. The flash of inspiration for the book was specifically the connection between the “tsim-tsum” or the void in the kabbalah, the zip paintings of Newman, and the central water channel of Kahn’s Salk Institute.

MCP: Who’s this book for and what do you want them to learn from it?

AG: The book is for myself primarily. I love looking at these connections between ideas and images. Then of course for fellow cabbalists, and anyone who appreciates looking at art and architecture in new and challenging ways. It’s also a design book that compares a wonderfully varied array of generally obscure sources, in juxtaposition with specific images in art and architecture. Finally, it’s a book of Jewish history and philosophy, raising a previously unacknowledged source of inspiration to public consciousness that continues to be a fascinating source of ideas. 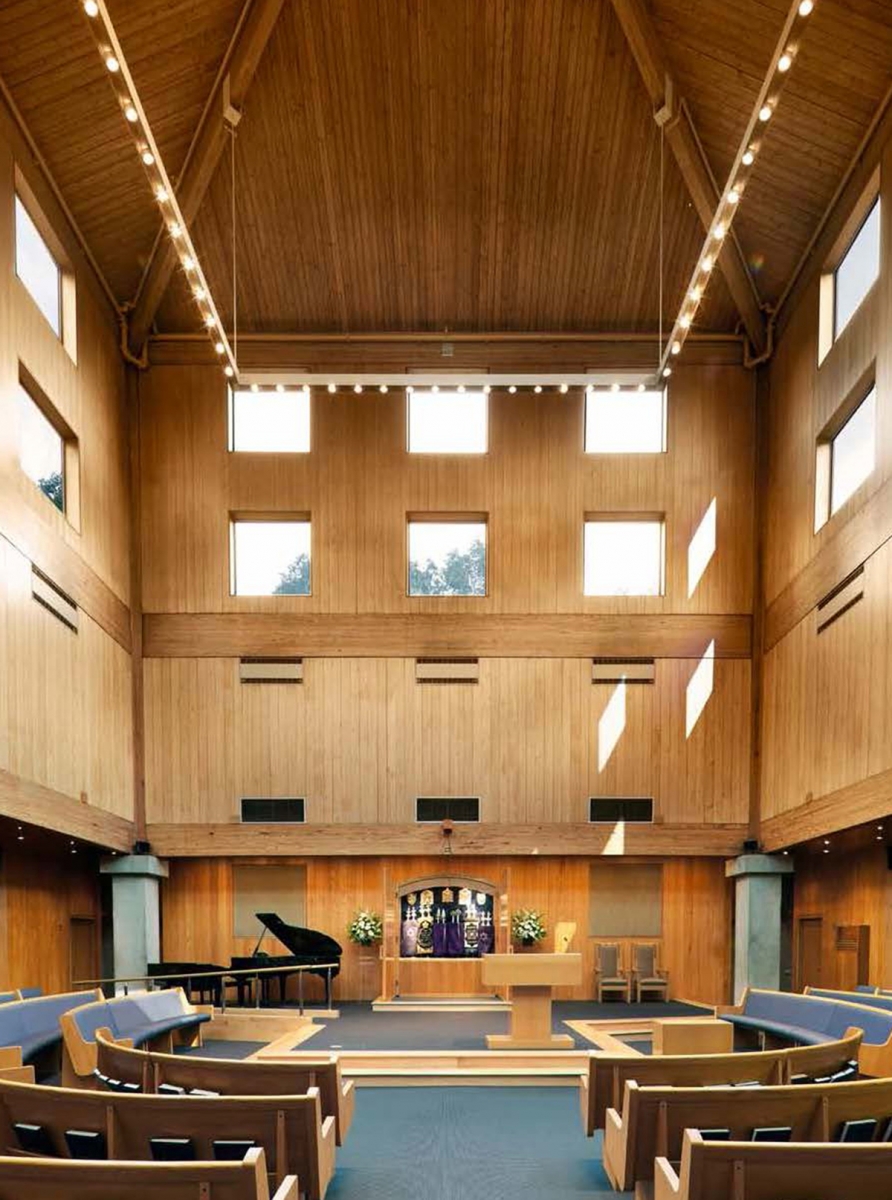 The central congregation space at the Temple Beth-el of North Westchester is a simple space enlivened by the changing play of light falling from the double ring of clerestory windows. The 24 windows are a lyrical interpretation of sanctuary building tradition.

MCP: Explain the connection of the Kabbalah to other religions, and how is that manifested in architecture?

AG: Historically Kabbalah has its connections to ancient Gnosticism, and to various mysticisms of light, such as Meister Eckhart of medieval Christianity. I find the potential relationship to Hindu Kundalini yoga to be the most intriguing. There is a close relationship between the diagram of the Kabbalistic Sefirot and the Kundalini as a microcosm of the human body and the corresponding nodal “chakra” points in yoga. Examples of religion, mysticism and architecture abound, as temples and sacred sites basically embody the ideas in built form of each religion, taking ideas that are cosmic in their outlook and translating them into “sticks and bricks.”  (No wonder architecture is almost impossible to achieve.) The Buddhist stupa of Borobadur in Java is a built meditation mandala, its concentric rings rising to a mountain linking heaven and earth. The Gothic Cathedral was a built version of the crystal cube of the “New Jerusalem” from the Apocalypse of St John the Divine, its stained glass the jeweled light of Paradise. Judaism, though, never had the opportunity to build as the Jews were often expelled after a period of time, before they got to learn how to interpret the precepts of the religion into built form. Ironically, the Kabbalah with its many abstract ideas has become a source for contemporary art, as its non-figurative and conceptual in its relationship to the world. 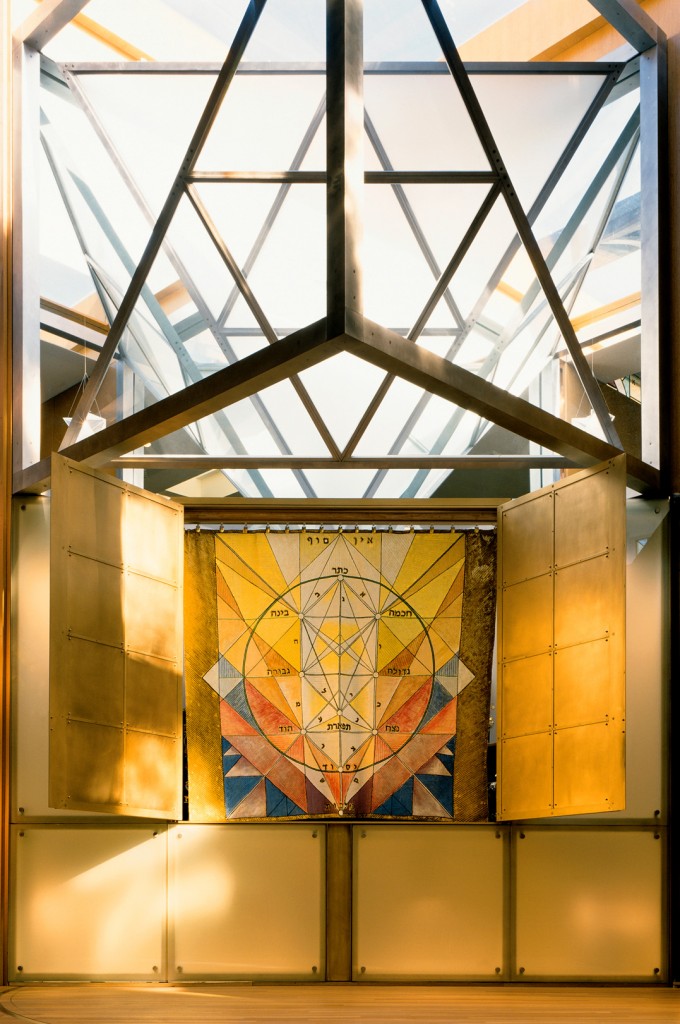 The altar at North Shore Hebrew Academy (1999), in Kings Point, New York, designed by Gorlin. The central diagram is inscribed with Kabbalistic geometries, intersecting wedges of color and light that materialize in architectural form above. A cubic lattice frame entombs an upside-down glass pyramid. The superimposition of lines and glass panes recalls, among other images, the Star of David.

MCP: How do you think hyper-rational architects will respond to the book?

AG: Who is hyper-rational these days? Certainly no architect after building anything of substance! The process is as irrational as can be, with crazy clients, budgets, constraints, codes and laws, so that to build anything is a miracle of the highest order. And after Le Corbusier wrote about “ineffable space” as an ultimate goal, rationality seems quite quaint. Nevertheless, I purposely included architects such as Peter Eisenmen, who in their Reform Judaic outlook reject the mystical side of anything. I’m sure he will be dismissive of the book as will those Revit-oriented CAD jockeys, but with Zaha’s flowing arabesques, whirling dervishes of Islamic Sufi mysticism, getting such press, who knows how the book will be greeted?