Imagine a distributed system of self-organizing and self-sustaining communities.

All photos courtesy the author

In the summer of 1975 I was sitting in a late afternoon forum at Arcosanti, the experimental urban oasis created by architect Paolo Soleri just north of Phoenix, Arizona. The temperature was unexpectedly cool in the concrete apse, which was used as a studio for the production of ceramic bells during the workday, and a place for meetings with workshoppers in the late afternoon. My colleagues and I had just spent hours in 110-degree desert heat, erecting concrete formwork for the new Crafts III building.  Now it was time to talk about it.

These dialogues with Soleri always included some lively discussions around his vision for Arcosanti, a massive urban megastructure and self-sustaining urban oasis meant to be built on a 25-acre footprint plopped smack in the middle of a 4,000 acre desert wilderness preserve. To hear Soleri describe it, future residents of Arcosanti would wake up in the morning, grab a cup of java, and after a 15-story elevator ride down to the first floor would soon be enjoying a morning stroll among the majestic boulders, cactus shrubs, seasonal wildflowers, and widespread wildness of Arizona’s high desert mesa country. Later they might meet up with some friends in the elegant communications lounge, where they would seamlessly connect through state of the art video-conferencing tools to the outside world. Then back up to your place for a short nap, an afternoon swim, an early evening jazz concert in the open-air amphitheater, followed by some bedtime reading in a favorite lounge chair under the grand vaults of the community commons. And you shared this place with 5,000 other residents.

This, we were told, would be the first of many cities to come. Each one producing its own food and heating and cooling itself through techniques designed to work in harmony with, not against nature. No automobiles, only elevators. Soleri dubbed these cities arcologies, a word he derived through a blend of architecture and ecology. He envisioned that other versions of these high-density urban megastructures could even double as colossal dams, and some day (buckle your seat belts) even as man-made space stations circling the earth. 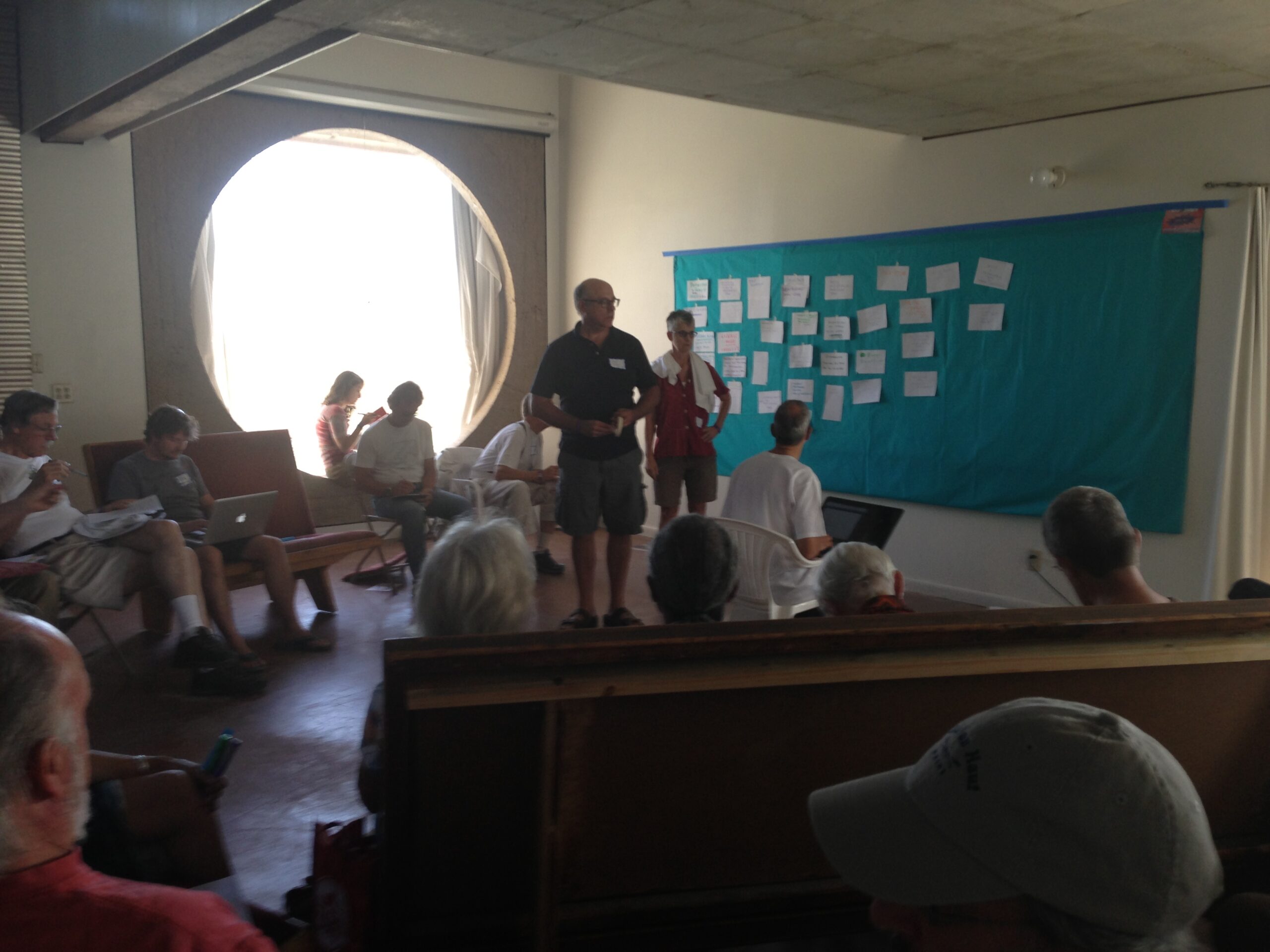 As we talked, the conversation brought to mind a densely packed colony of termites, with those tall self-ventilating mud towers that you see in pictures from the Amazon rainforest.  Or perhaps it was more like a hive of bees, with a super-sized honeycomb superstructure out in the middle of a field of wildflowers.  At one point I asked Paolo if he had ever studied the lives of bees. His awkward reply seemed a little off guard, a reaction that I didn’t understand at the time.

Now, 40 years later, on the eve of the autumnal equinox, more than three hundred friends of this first fledgling experiment of an arcology had swarmed in from far away places to commemorate Soleri’s passing, and to celebrate his 93 years of creative prognostications.  Most of the attendees had spent time at Arcosanti workshops. Some had stayed on to become part or full time residents of the place. The celebration included status reports, personal meditations, a starlit concert in the outdoor amphitheater by Sonya Lee, a talented classical pianist, and a documentary film chronicling Soleri’s lifetime achievements.  One group created a procession to Soleri’s nearby gravesite—in the searing desert heat—which was only partially mitigated by the same paper parasols that long time resident and site coordinator Mary Hoadley remembered as Paolo’s favorite personal shading device.

In addition, the alumni joined in a series of discussions aimed at exploring where Arcosanti might go from here.  The discussions began before the event with an exchange between one of the alumni and Jeff Stein, president of the Cosanti Foundation.  Stein responded immediately by connecting more than one hundred registrants, ranging in age from 20 to 92, into a single email exchange.  Stein then hired Partners in Participation, a Phoenix based community engagement firm, to facilitate a community dialogue.  As one would expect, questions started bubbling up immediately:  what is the authority of the current board?  What will be the role of the alumni moving forward? How will Arcosanti sustain itself economically? 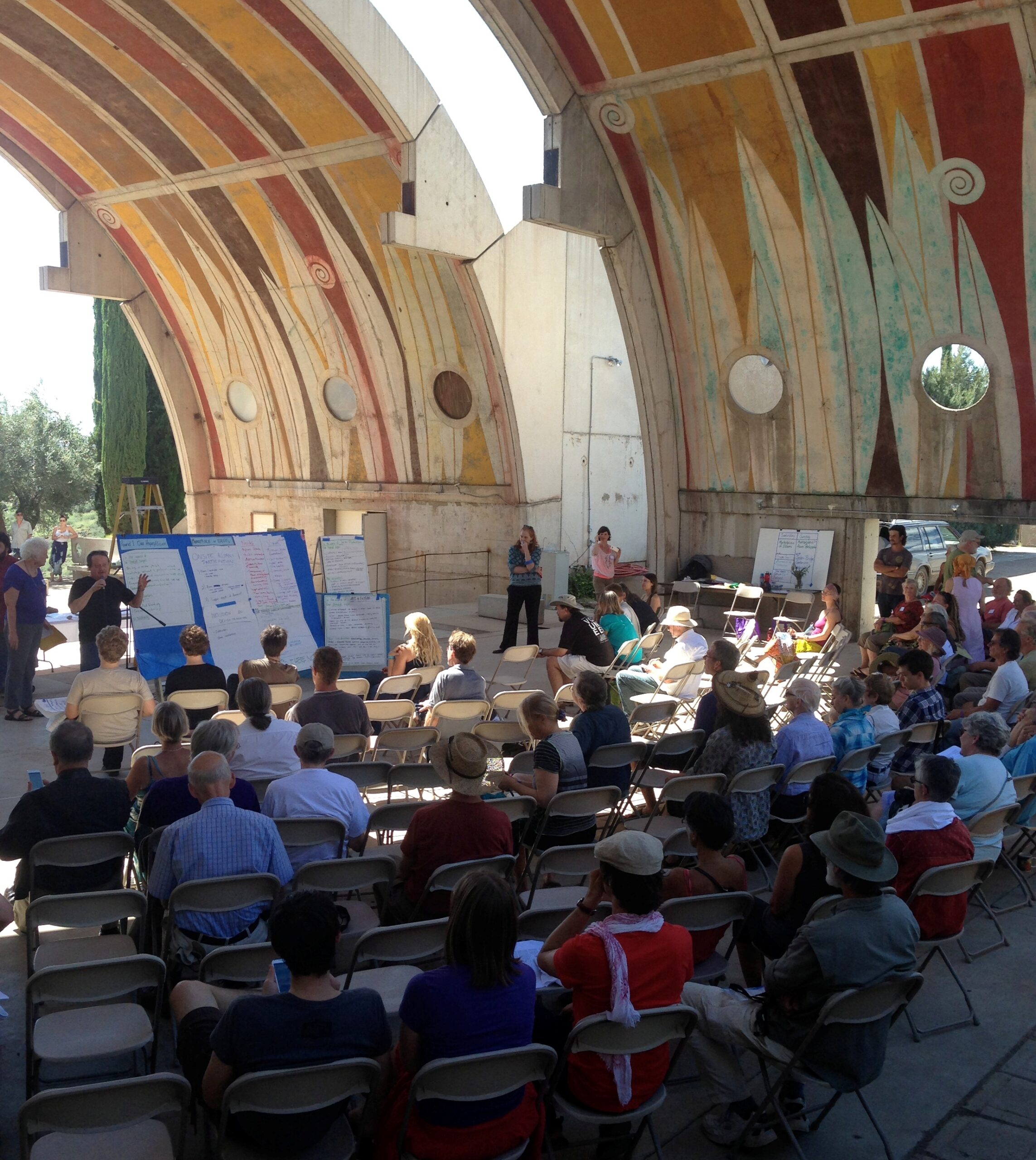 Now back to the bees, for a moment. Until recently biologists thought that beehives were managed by a single queen, whose role was to boss around all of the other “worker” bees. But more recent research indicates that the queen’s role is to keep making babies.  Bees have a short life, so they have to be continuously replaced or the hive won’t survive.  The hive’s governance is structured around a concept called “emergence.”  This means that bees are always communicating with each other. They transfer information, like where the juiciest flowers are, through an exchange of chemicals called pheromones. The structure of the hive as a whole is actually the sum of all of its individual parts.

In his book, Emergence, author Steven Johnson puts it this way: “In the simplest terms, emergent systems solve problems by drawing on masses of relatively stupid elements, rather than a single, intelligent executive branch. They are bottom-up systems, not top down.“

So, with some inevitable venting at the outset, the alumni meetings moved on to become quite harmonious and productive.  Folks swarmed into focus groups, deliberating options and offering action steps in about a dozen different categories. With only 90,000 square feet of space completed in more than 40 years, the group left with a commitment to double that number in five years, and to expand the population of the site to at least 300 to 500 residents. The overriding theme of the event was summarized in a single slogan: “Build It Now.” 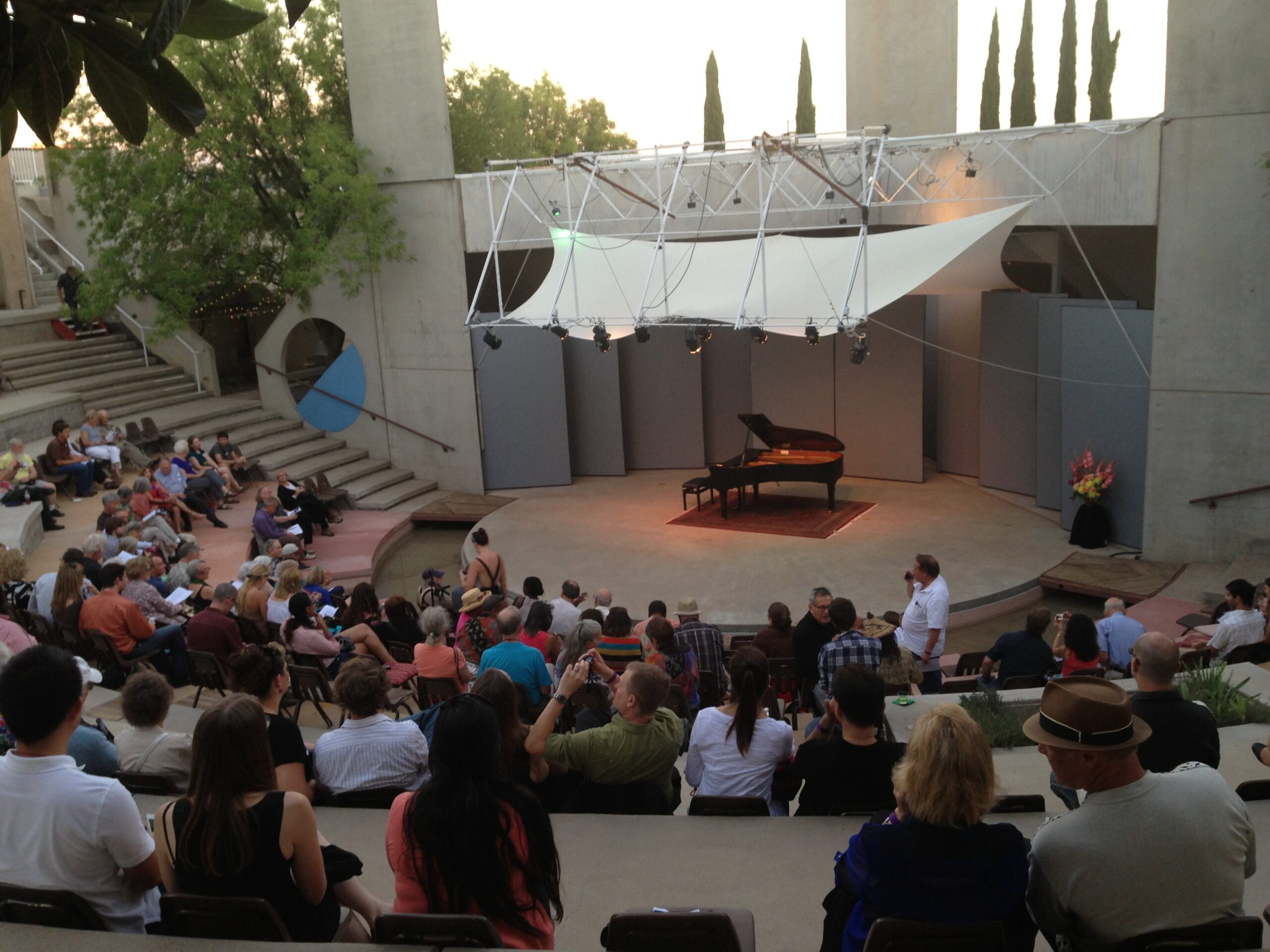 This will require a lot more practical visioning and cooperative behavior.  Turns out that a fledgling alumni association was already in the process of reaching out to the more than 7,000 workshoppers who had slung hammers and poured concrete since the project’s 1970 groundbreaking.  And many more thousands of visitors have logged in their email addresses after buying bells or setting off on tours from the Cosanti Originals shop in the Crafts III building.

In the final large group gathering of the weekend Stein implored the swarm to continue its work.  “Thank you for this weekend,” he said.  “We hope that you imagine that we are taking you seriously already.  For the serious business that all of us in the room are involved with, and speaking on behalf of the whole board, we believe it, and are ready to go forward with everyone in the room as our partners.”.

Feedback from some of the site’s long-term resident staff, while respectful of their mentor’s single-minded leadership, also celebrated this new buzz of critical thinking.  Some, I’m sure, were already picturing in their minds the ultimate manifestation of Arcosanti as a nexus of place and people, magic and beauty. So if the experiment works out, and the bees can avoid crashing into each other, the sky could be the limit for future arcologies.

With sea levels rising, and some estimates indicating more than 50% of the world’s population now living near coastlines, it’s not too early to look for more creative and sustainable urban options.  It’s also not so hard to imagine hundreds of practical utopian arcologies, spread out across the planet, rising from the forests of western Africa, to the rolling plains of northern India, or even (buckle your shoulder straps) a cluster of 5,000 whacked out spaceagers circling the earth in a man-made arco-space station. Imagine, if you dare, a distributed system of these self-organizing and self-sustaining communities, designed to replace today’s physically sprawling, sensually challenged, ecologically unreliable, environmentally wasteful megalopolis.

This is the dream to which Paolo Soleri dedicated his life.  With the help of a devoted board of directors and thousands of enthusiastic workshoppers, he created an organization that could cast and sell clay and bronze bells to pay for building materials, cultivate food in community gardens, form and pour concrete, and join in dialogues, long into the night.  Now it looks like it will be up to the hive, working together, to determine if and where Paolo’s vision will go from here.

Steven Bingler is the founder and president of Concordia, a New Orleans–based firm that focuses on the planning and design of a wide range of community-based environments for living and learning. Concordia’s research alliances include the MIT Media Lab, Harvard University’s Project Zero, the University of New Mexico, the National Aeronautics and Space Administration, the Thornburg Institute, the Appalachian Education Lab, and the West Ed Lab.