Francis Kéré, a Burkina Faso native, hopes to heal his torn country with his proposal for the parliament’s master plan.

Aerial view of the project

This article was published in partnership with ArchDaily. Find the original article here.

On October 30, 2014, as Burkina Faso President Blaise Compaoré was preparing to make an amendment to the country’s constitution that would eliminate presidential term limits and allow him to extend his 27 year rule, tens of thousands of Burkinabé citizens in the capital city of Ouagadougou broke through police lines to set fire to several government buildings, including city hall, the ruling party headquarters, and the National Assembly Building. The following day, Compaoré stepped down, ushering in a new era of democratic rule and resulting in the country’s first ever pluralistic and competitive Presidential election in 2015.

But the revolution left the former government complex in tatters and in need of a clear direction forward both culturally and architecturally. A former French colony, Burkina Faso is home to 19 million people, 50 different ethnicities and more than 60 languages. The country would require a new Parliament that could serve as a common ground for these diverse groups, while providing the technology and education necessary to create opportunities and a better quality of life for all Burkinabés. 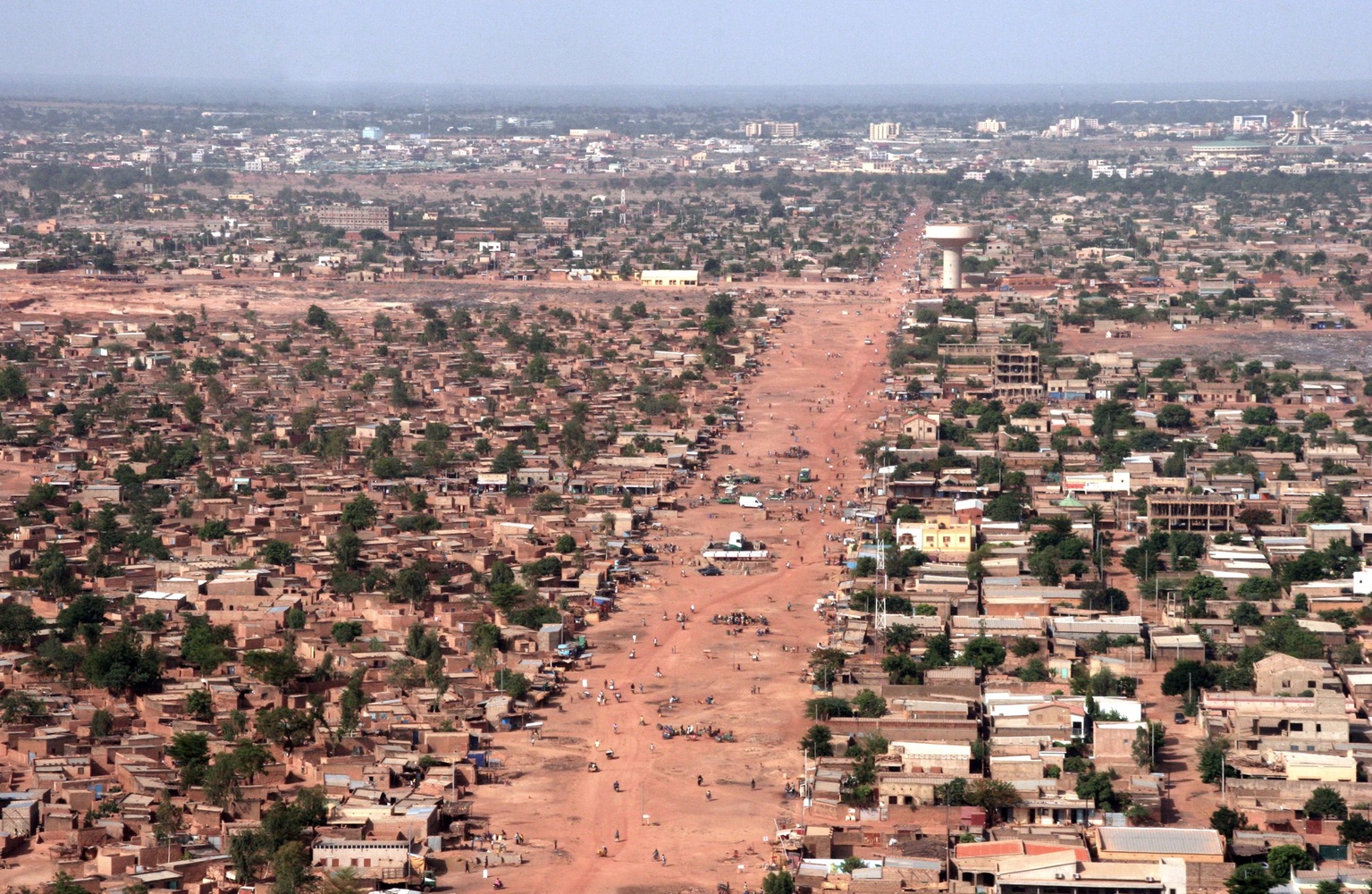 To find this solution, last year, the new head of Parliament approached architect and Burkina Faso native Francis Kéré to develop a building and masterplan for the Assembly Building. The new building, in the architect’s words, would need to be one that could “not only address the core democratic values of transparency, openness and equality, but could also become a catalyst for growth and development for the capital city of Ouagadougou as a whole.”

At the 2016 Venice Biennale, as part of the exhibition In Search of a New Ouagadougou at the 15th International Architecture Exhibition, Francis Kéré and his firm Kéré Architecture, unveiled the plans for their design for the first time.

Kéré’s design takes the form of a grand, stepped ziggurat that invites people to climb, enter or occupy the entire building surface. At six stories tall, the building would stand out from the low profile and radically flat topography of Ouagadougou, giving residents a new elevated perspective on the entirety of their city. These design decisions combine to create a new sense of democracy that is both literal and symbolic.

“In a village setting, the process of decision-making is not a private matter occurring behind closed doors; community-members are free to sit near the gathering and observe the proceedings. In this true spirit of transparency and openness, the outer facade of the parliamentary structure is designed to be inhabited by the public,” explain the architects. 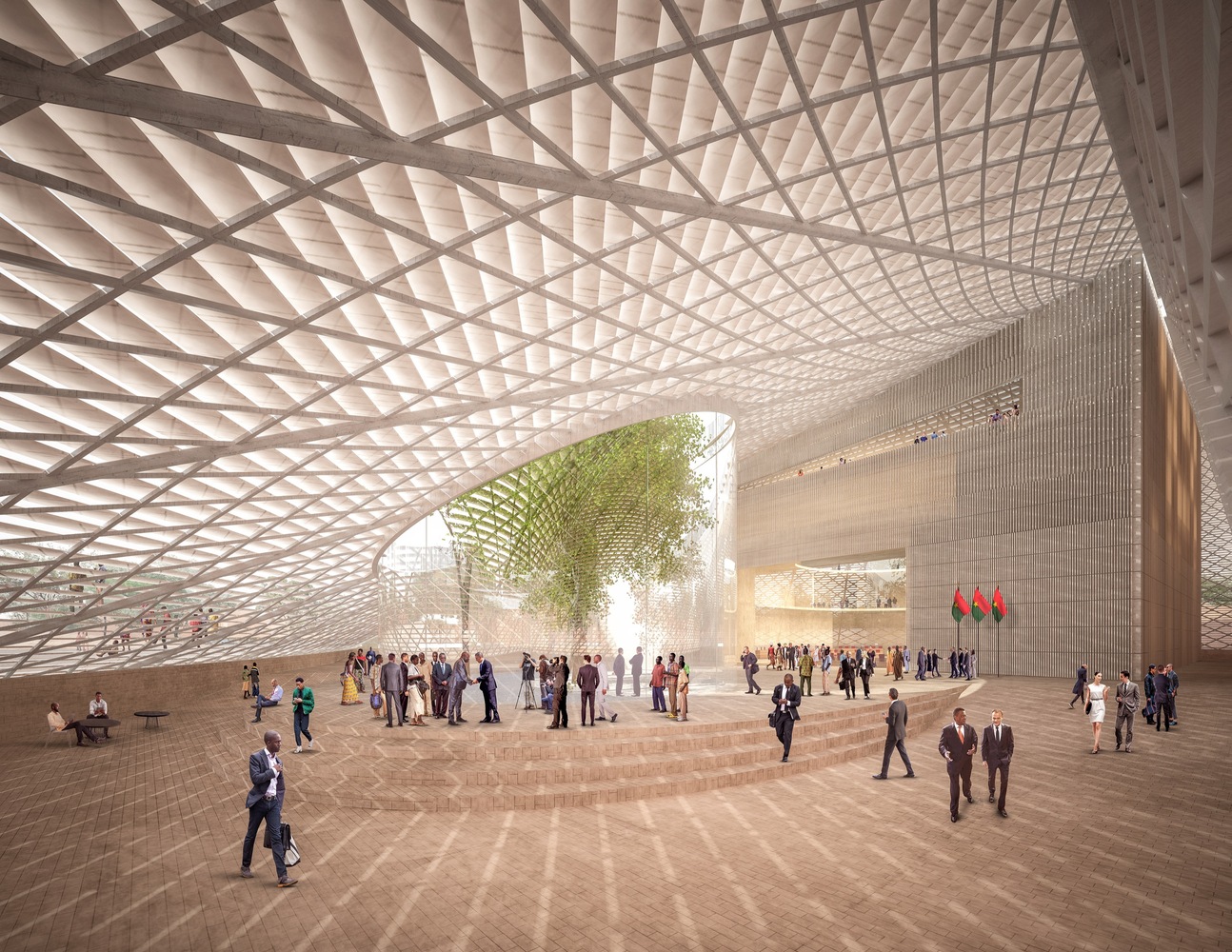 The design also draws inspiration from Burkina Faso’s agricultural economy, where nearly 90% of the labor force is employed in farming. For this reason, Kéré has integrated several green terraces along the occupiable facade to create a communal laboratory for pioneering new urban agricultural techniques. The vegetation would be supported by solar shading elements, which would also provide cooling and air circulation to the building’s interior.

Inside the building, the new 127-seat Parliament Assembly hall has been designed not to replicate western models for government chambers, but to respond to local needs, resources and climate. To achieve this, Kéré looked to traditional Burkinabés government settings.

“In rural areas, the elders of a village gather to discuss important matters under the shade of a great tree. Kéré reinstated this Arbre à palabres, or tree of discussion, in a private garden directly adjacent to the formal assembly hall where members of parliament can convene more directly.” 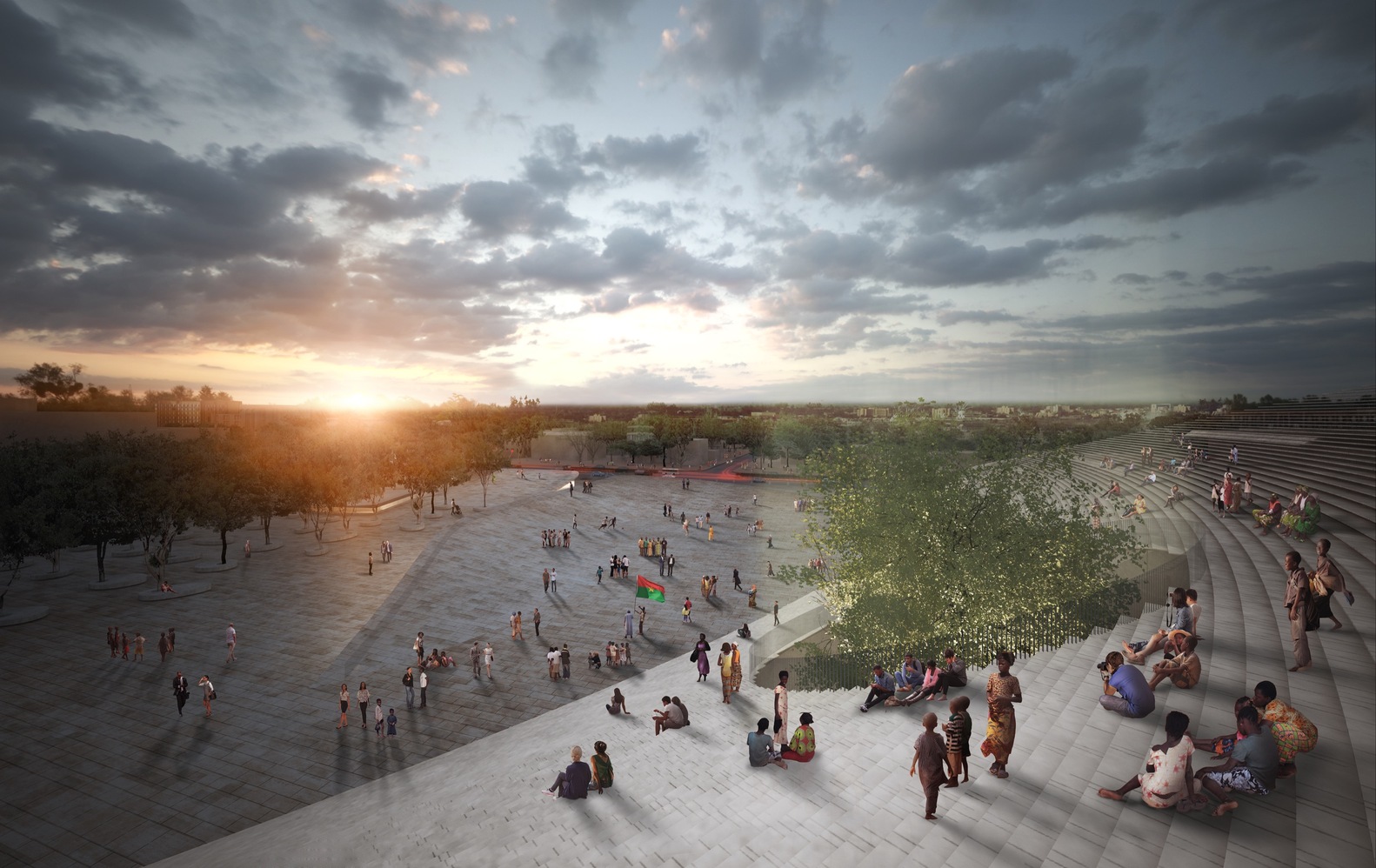 The parliament’s exterior and public space

The new parliament building will sit within a larger masterplan that will also pay homage to the site’s history—in place of the ruin of the old assembly building, Kéré has designed a memorial in the form of a shaded depression and pool in the earth where rainwater can be collected for on-site irrigation and to serve as a passive cooling system for the interior. The space is intended to create a serene atmosphere where “visitors can relax in the shade and reflect upon those who lost their lives in the revolts.”

Surrounding the memorial, a grove of native trees will provide shaded areas for seating and gathering. Nearby, new commercial storefronts and exhibitions spaces will activate the space.

In a transformative time for Burkina Faso, Kéré Architecture’s design tackles the question of “How do we move forward?” by creating a building and masterplan that are truly for its people. Says Kéré: “We want the entire building to be a platform for people to take ownership of.”

This project is currently on display at the 15th International Architecture Exhibition Reporting from the Front for the Venice Biennale. The exhibition is on view until November 27th 2016. 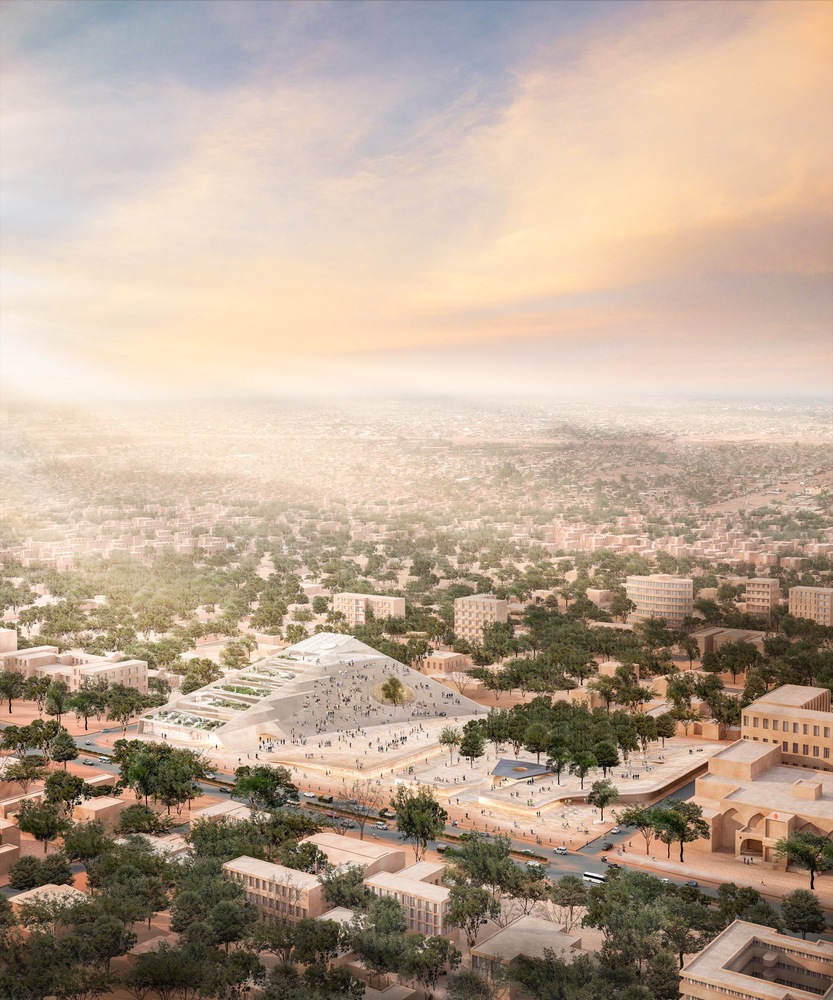 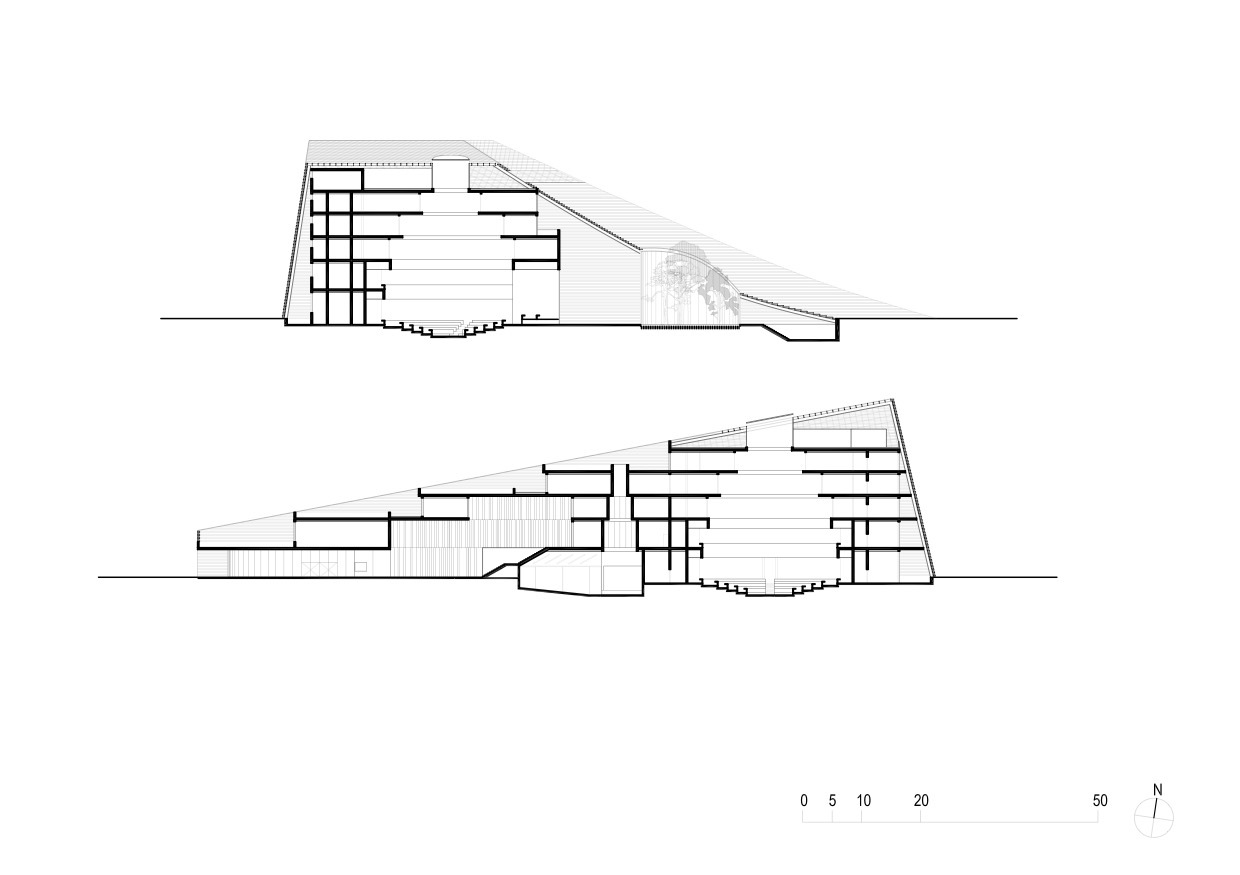 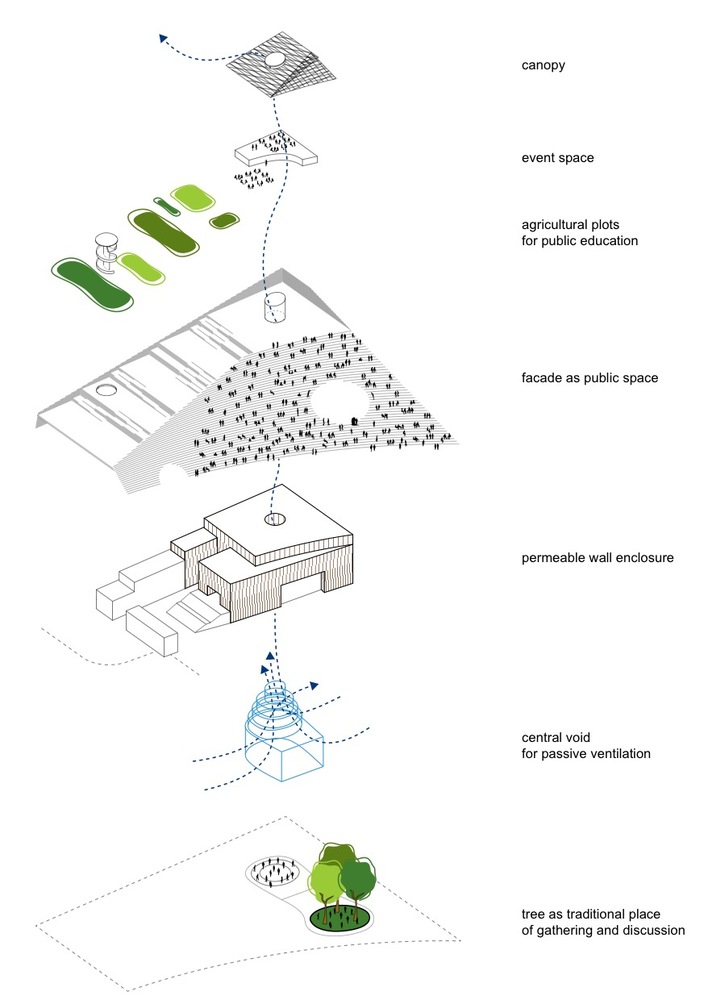