The famous filmmaker fails to sell
San Francisco on a deal seemingly
too good to be true. 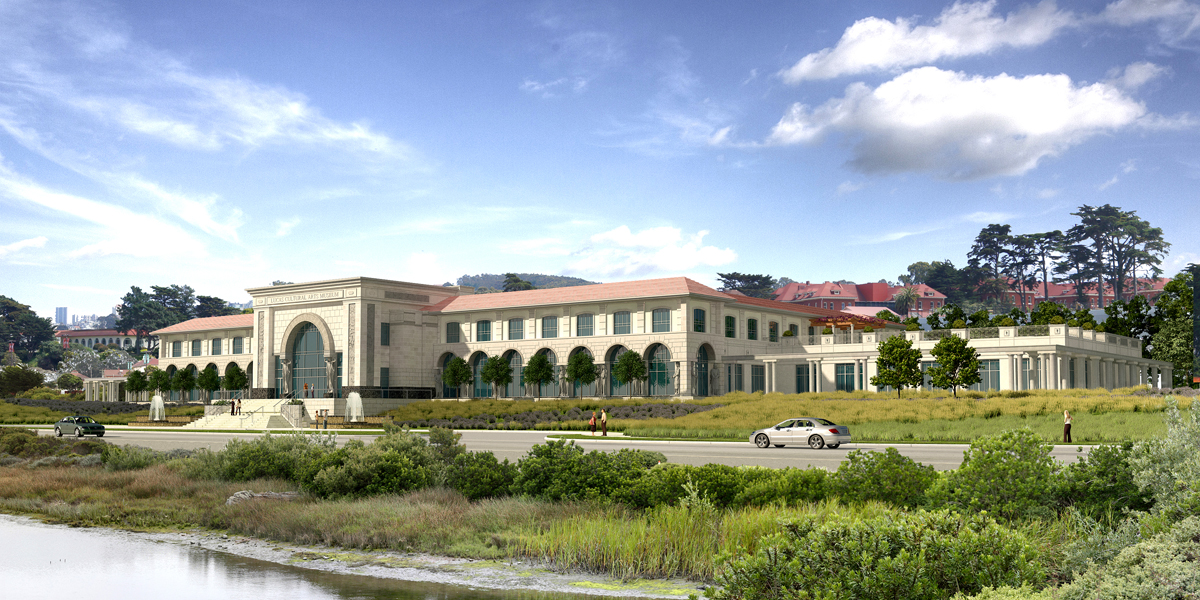 George Lucas sponsored this proposal for a site near the Presidio in San Francisco. The Lucas Cultural Arts Museum, designed by the Urban Design Group of Dallas, would have been largely financed by the filmmaker, to the tune of $700 million.

Development fights in prosperous, contentious cities are rarely as simple as the surface issues at hand, such as traffic or height. The proposals that cause a widespread civic fuss strike deeper—churning up gut reactions to culture and class, the evolving urban landscape, and how things ought to be, even if no two people define utopia in quite the same way. So it’s no wonder that San Francisco became transfixed last fall by the question of whether billionaire filmmaker and Bay Area resident George Lucas should be allowed to write a $700 million check to build and endow a museum showcasing his personal tastes in art. Or why a fight that from a distance seems absurd—more West Coast navel-gazing over a proposal that would make most municipalities swoon—exposed, in fact, a basic truth that other cities would do well to note: Big, easy answers aren’t nearly as persuasive as the underlying logic of place.

The finale in this saga came in early February, when the directors of the Presidio Trust closed down a competition that had begun 14 months earlier with 16 teams offering their best shot at crafting “a resource for the community and a national and international draw.” It sounds grandiose, but it boiled down to the chance to replace a 93,000-square-foot commissary-turned-sporting-goods-store with a cultural facility of, you guessed it, roughly 93,000 square feet.

Put that way, the whole mess seems overblown. And when you consider that one of the three finalists was Lucas, the creator of Star Wars and an undeniable force in the rise of digital animation, why on earth would any right-minded decision maker say no? Fair question—unless you understand the surroundings of what otherwise is a parking lot and retail box that could be found on the outskirts of any American suburb.

The former commissary stands across from Crissy Field, a 130-acre open space designed by Hargreaves Associates that in 2001 replaced a military airfield and supply yard. There’s a meadow-scaled lawn now dotted with eight immense Mark di Suvero sculptures, a re-created marsh, picnic spaces against a bluff and, connecting it all, a promenade along San Francisco Bay that extends beyond Crissy Field to conclude at a Civil War–era fort beneath the Golden Gate Bridge.

“I don’t have enough walls, which is why I want to build a museum,” Lucas told the San Francisco Chronicle.

The too-good-to-be-true setting doubles as the north rim of the Presidio, a former army post that in 1994 was added to the Golden Gate National Recreation Area. Though it’s within San Francisco’s boundaries, the 1,491-acre enclave is an autonomous piece of the National Park Service, required by Congress to be financially self-sufficient. The trust is managed by seven board members—six appointed by the president and one by the secretary of the interior.

When the Presidio began its new life, skeptics predicted it would degenerate into a thicket of homeless campers, blackberry vines, and fallen trees. Instead, what has emerged is a weave of forests and historic military buildings where wide trails lead past creeks freed from culverts, or freshly planted hillsides where the army dumped trash for decades. There are three Andy Goldsworthy installations, each an imaginative response to the setting. On the Presidio’s Main Post, the asphalt that covered the traditional parade ground has been replaced in part with a formal green where, during the summer, bonfires and food trucks are weekly attractions.

In between the Main Post and Crissy Field is the biggest project since military days—the rebuilding of the steel viaduct that, for 75 years, was the link between the Golden Gate Bridge and the neighborhoods of central San Francisco. The $1 billion project was born of engineering needs—seismic safety, for starters—but it includes two artificial bluffs that will drape across the redone roadway. The commissary site sits between the bluffs-to-be, across from the marsh, at the hinge where the different worlds will meet someday.

Lucas’s proposal was just one of three finalists announced in September to revitalize Presidio. (All the proposals were shot down in February.) The Bridge/Sustainability Project, designed by WRNS Studio, was envisioned as a hybrid museum, science, and nature center.

The thread linking all these changes is that they seem natural, even when they’re not. You can quibble with the details, such as former officers’ homes that rent for $15,000 a month (this is not a typo; the least expensive apartment of the 1,200 residential units in the park’s restored buildings goes for $2,400), but there’s an overall sense that the Presidio is becoming what it innately has wanted to be all along—a blend of city and nature unlike any in the country.

The Lucas Cultural Arts Museum, by contrast, was an elevator pitch gone astray: Star Wars wizard blesses public with his take on popular storytelling of the past 125 years! A family-friendly arc stretching from Norman Rockwell and Maxfield Parrish to the computerized cartoon magic of Toy Story, in a triumph of neo-classicism complete with an arched entryway beneath a grand dome, the arch resting atop columns cast as stone figures with wings.

“I don’t have enough walls, which is why I want to build a museum,” Lucas told the San Francisco Chronicle last March in a front-page interview that ran the day the 16 competitors filed their initial proposals. As for the notion that his brand of “populist art” might not merit museum status on a premier site, Lucas demurred, “As a popular artist, I hit the same chord with people that Rockwell hit, that Michelangelo hit, that the people who painted on caves in France hit.” So there.

Meanwhile, the lobbying campaign for the museum was as methodical as the rollout of a summer blockbuster, striving to please every audience demographic while conjuring an air of thunderous inevitability. When the three finalists submitted their full proposals last September, only one came with 27 endorsement letters that would do a red carpet proud. Martin Scorsese proclaimed his “wholehearted support” for a museum that “explores our shared cultural mythology.” Governor Jerry Brown intoned that “this means substantial job creation. . . at no cost to the taxpayer.” Financier Charles Schwab thanked Lucas for showing him collection highlights and, by the way, “lunch was terrific.”

There was an implicit hubris to all this—and the implicit was made explicit again and again. One endorsement letter was from socialite powerhouse Diane B. “Dede” Wilsey, president of the Fine Arts Museum of San Francisco. Besides expressing satisfaction that a self-financed museum means “there will be no fund-raising to interfere with the efforts of the symphony, fine arts museums, opera, or ballet,” Wilsey added, “I know Mr. Lucas will be sensitive to the concerns of the myriads of people who offer opinions, warranted or not.”

Two months later, a much different power-house weighed in—venture capitalist Ron Conway. A confidante of the mayor and self-appointed voice of the technology firms that have become an economic force in the city, Conway gathered 35 signatures—including cofounders of Twitter, YouTube and Airbnb—in a letter that declared “there is no greater innovator around than George Lucas” and that the trust’s selection of his proposal would send a message “that San Francisco is, and will remain, this country’s capital of innovation.” 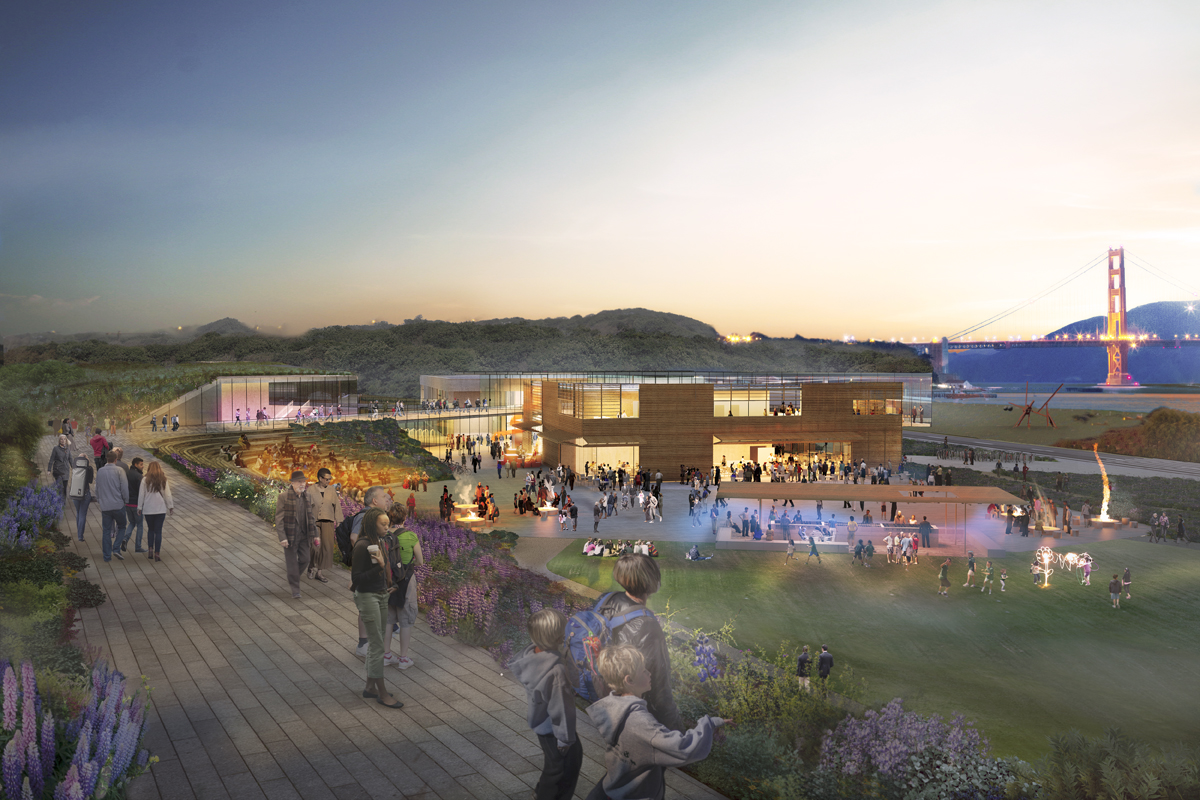 EHDD Architecture created the Presidio Exchange plan. It would have used part of the old commissary and created diagonal paths through the building.

This cast of characters had more clout than the architecture buffs who were mortified that the Lucas design looked like a napkin sketch by someone with delusions of Beaux Arts grandeur. But their arguments reduced the Presidio to a scenic blank slate for San Francisco where friends of George could leave their mark, whether in the cause of tech triumphalism or to add another bauble to the city’s collection of cultural jewels.

And that sense of entitlement triggered resistance from a power bloc of a different sort: the private foundations who have donated more than $75 million to help make today’s Presidio what it is…well-connected players who were on the field when Lucas was busy selling his empire to Walt Disney Company for $4 billion.

Foundations like this rarely make fusses in public. So it was news when the Evelyn & Walter Haas, Jr. Fund, the largest single donor to Crissy Field’s restoration, asked that any decision be put off at least three years to let people see how the former commissary site fit the redone landscape. And when several other foundations followed with similar letters. And when the National Park Service joined in. “The proper stewardship of the Presidio merits taking the long view,” wrote Frank Dean, general superintendent of the Golden Gate National Recreation Area. “While the programs of the proposed (Lucas) museum seem interesting, the museum’s offerings could be located anywhere; therefore, the museum does not merit one of the most important sites in the entire Presidio.”

The controversy exposed, in fact, a basic truth that other cities would do well to note: Big, easy answers aren’t nearly as persuasive as the underlying logic of place.

These arguments, polite but blunt, are the ones that carried the day. And for a very simple reason: They resonated with the reality experienced by people familiar with the Presidio. It is a national treasure and a work in progress, where the most satisfying additions have a feeling of fine-grain inevitability.

By their nature, cities resist easy solutions or magic bullets. The ones that endure are complex terrains, seductive and unpredictable. If nothing else, the ongoing transformation of the Presidio shows the value that comes through a procession of small steps, each taking cues from what came before. Changes that fill in the blanks rather than send the plot in a new direction—no matter who the author, or auteur, might be.