The George Nelson exhibit at Yale School of Architecture shows how the iconic designer embraced fun in his work.

“Design cannot transform a little brown, dark life into a large brightly colored one. Only the person living can do that.” It’s a sentiment that went oft-quoted during the symposium, “George Nelson: Design for Living, American Mid-Century Design and Its Legacy Today,” held recently at Yale School of Architecture. The event was pegged to the opening of the exhibition, George Nelson: Architect, Writer, Designer, Teacher, which hopes to bring Nelson’s work to a new generation of students. Today, as we may take for granted America’s legacy of “mid-century modern” design, the show foregrounds the innovation and energy that embodied Nelson’s era. 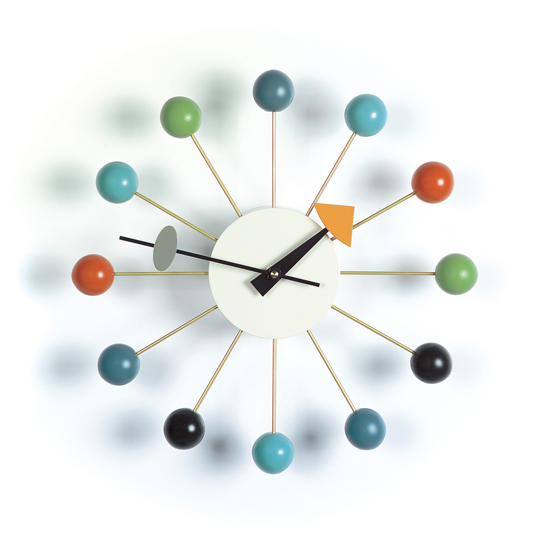 Walking into the exhibition is like stepping into someone else’s life—a life not necessarily more glamorous or exciting than yours, but maybe a bit more entertaining. While much of his work—from marshmallow couches to colorful, radiant clocks—is imbued with a certain sense of whimsy, the seriousness of Nelson’s design aesthetic is not to be doubted. The work glides effortlessly between restraint and freedom. It moves from the scale of dishware and furniture to single-family houses with equal ease.

Although Nelson’s name is synonymous with small-scale industrial design objects, the exhibition explores him at his most immersive mode. Models and photographs document Nelson’s American National Exhibition in Moscow in 1959, site of the infamous cold war “Kitchen Debates” between Nixon and Khrushchev. From these documents it becomes clear how each detail and material was considered in depth. And yet, the project also embodied that uniquely American concept, fun. 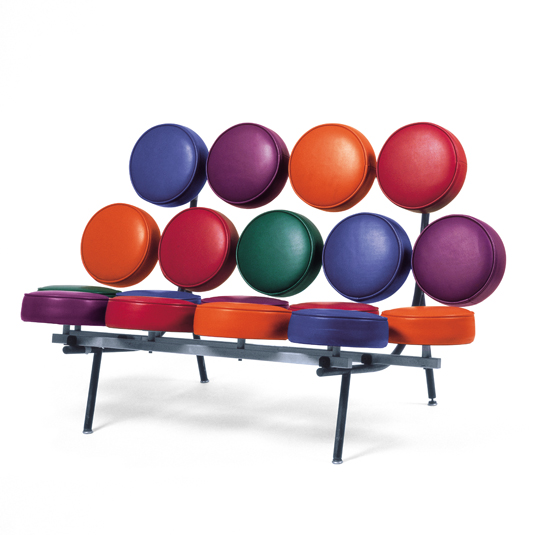 What will my generation take away from the design philosophy of George Nelson? In a culture of media cycles, disasters both natural and manmade, and political gridlock it is easy for young designers to become overwhelmed with the task at hand. We are taught to perceive scale, to zoom from body to city in seconds, and to simultaneously consider the physical conditions of our buildings as well as their social, political, and economic factors. While all of these tasks are important, George Nelson is a breath of fresh air finding joy in limits.

It is critical to remember that while design is important, we should forgo the charge to “save” anything. In the spirit of George Nelson, design should not be bore out of fear, but out of love. The brilliance of this exhibition is that it expands Nelson’s legacy beyond the familiar icons of sofas and storage walls to an architect who is interested in something more than the designed object: the people who inhabit and use his designs. The humanism that brought such vitality and life to Nelson’s designs extended to his interactions with fellow designers, as he brought Charles and Ray Eames, and Isamu Noguchi into collaboration with Herman Miller. Nelson recognized the talent of these young designers and nurtured their creativity through mentorship.

Those who knew him saw him not only as a great designer, but also an influential and compassionate teacher. If design cannot “transform a little brown, dark life into a large brightly colored one,” it can certainly point you in the right direction.

Ashley Bigham is a graduate student the Yale School of Architecture.