Grossman, who died in 1999, was an important figure in the Southern California design movement of the 1950s and ’60s. A two-time recipient of the Museum of Modern Art’s Good Design award, she was a fixture in Arts & Architecture magazine and an influence on such better-known contemporaries as Charles and Ray Eames, Richard Neutra, and John Lautner. 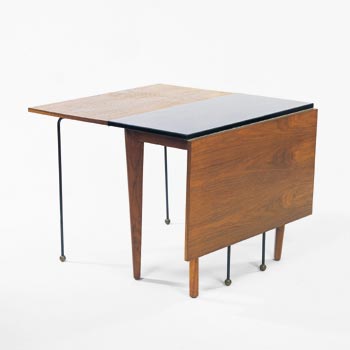 You can view a number of Grossman’s realized designs—including her 1952 dining table for Glen of California (above)—at Architonic.

Greta Magnusson Grossman: Furniture and Lighting will be on view at the Drawing Center from October 17 to November 6. The opening reception is tonight from 6 to 8 p.m.