The three phases of urban design in practice

The Nature of Urban Design, Alexandros Washburn’s first book, published this season by Island Press, is a treat for anyone who loves living in cities and wants to make them better, including professional planners and architects. Washburn, the chief urban planner for New York City, takes us inside the planning process, celebrates positive outcomes, and pleads for a “greater resilience” in these times of climate change.

With this book, as Martin Pedersen, Metropolis executive editor wrote in a previous post, Washburn “has accomplished, if not the impossible, then certainly the daunting: he’s written a concise and accessible treatise on urban planning, blissfully free of jargon…” Here I chose to excerpt a revealing case study of how people with different skills and interests can come together for the benefit of their community.–SSS

Geoffrey Canada is an educator whose goal is to end the cycle of poverty in Harlem. He has promised that every child in Harlem will go to college. Many know him as the subject of a movie on reforming education called Waiting for Superman. He runs an organization called the Harlem Children’s Zone.

To make good on his word, he combines public and private finance to build a series of charter schools, which he calls Promise Academies, to educate the children of Harlem who might otherwise drop out of the school system. He is an intense man and polite, but driven, impatient to reach his goals. When he needed to expand with another school for 1,300 children, he was worried that the urban design process would slow him down.

In November 2009, Canada had met with the head of the New York City Housing Authority (NYCHA), a public authority that owns acres of New York City land on which almost a half million people live in public housing. Most of this housing was built 50 years ago as part of the Robert Moses slum clearance program. Canada’s idea was to bring a school right to the residents of public housing.

Our urban design group met Canada, and we were given a mission: to lead a planning effort with NYCHA and the Harlem Children’s Zone and find a home for the new school in a way that would be as beneficial as possible for the community and the neighborhood.

Everyone involved had strong opinions. We had a deadline. We promised a consensus site plan by the first week in February 2010. We started out to design the question: what are we transforming and why? At first, Canada thought that asking such a broad question was wasting precious time we did not have, but by asking the question we quickly got a statement of goals out of each of the stakeholders. We did a quick urban design study on a public housing site, the St. Nicholas Houses, located on four New York City blocks that had been combined into a superblock in 1953; there are 1,417 units in 13 towers. The superblock configuration had closed 129th Street in Harlem and isolated the housing from the surrounding community, and it had become a haven for gangs. The one bright spot was a grove of mature trees in the open center of the superblock.

If we designed a standard school for 1,300 kids, there would be only one place big enough to put it: right in the middle, on top of the forest of trees. Not only would the community lose its trees but the school would be isolated within the housing, which was in turn isolated from the city around it. We needed to do better, but we didn’t have much time.

We built a team of stakeholders, we established a design process with NYCHA, St. Nick’s tenants’ association, Harlem Children’s Zone, and the school’s builders, and we began meeting, first with the tenants’ association, then with the school principals to lay out a program. We took site tours with Willie Mae Lewis, president of the tenants’ association, to see how people used the space, and with NYCHA building management to see how the existing buildings operated. We met with the church groups on site, with merchants around the neighborhood, with other city agencies that would be in charge of approving every aspect of the development from storm water to traffic to construction to financing and educational standards.

At this point, we had a client in the many stakeholders who had to be kept happy. We had a site in that we would have to locate a sizable school somewhere in the housing development, and we had a program: a school within a community with before and after school programs that would go beyond K–12 to touch everyone from babies to retirees. 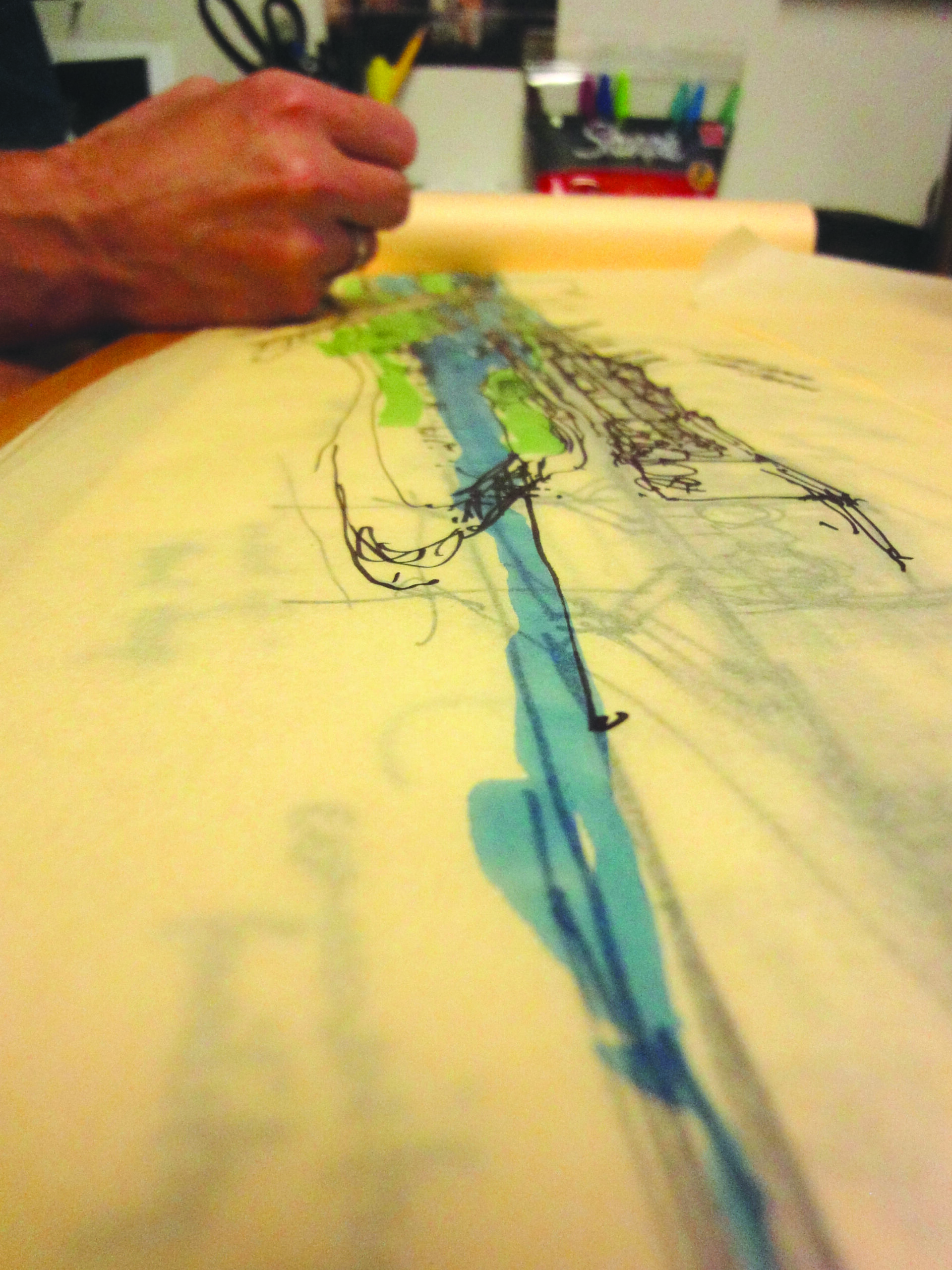 We had “designed the question” by articulating the clients’ goals as design imperatives: for Harlem Children’s Zone, to build a school on time and on budget with strong community integration; for NYCHA, to reopen the superblock with a city street, to minimize the building’s footprint to preserve open space; and for City Planning, to support the goals of an area-wide rezoning and bring increased vibrancy and mixed uses to the neighborhood.

Now we had only a month to design the answer. Our promised product was a consensus site plan, which the school’s architect would take over and use to design the school. We sketched with the team, built models, met again and again with the stakeholders. Every sketch would have political input; the project was now a top priority with City Hall. And every configuration of the school would have immediate financial impacts that would then reverberate to financial commitments already in place from the city and private sector donation. The design kept changing as we tried to meet our stakeholders’ goals. Finally the design was ready.

Now the urban design process entered the implementation phase. As urban designers, our role diminished to presentations and revisions. We held public meetings and kept everyone moving forward with visual communication. Of course there was dissent, some of it angry. Nothing happens easily in cities. People who oppose charter schools in general attacked the project in specific for its street, for its bulk, for its cost, trying to kill the school before it could be born. There was screaming at hearings, but the voices of parents and students desperate for a chance at a good school in their neighborhood eventually overcame the entrenched interests. Approvals in hand, the only thing remaining was to fill a budget gap. The city could give no more, so Canada reached out to his board and to the private sector. In a matter of weeks, he had raised millions from Google, Goldman Sachs, and some of the city’s wealthiest philanthropists. The project was a go.

We opened 129th Street to connect the project to the city’s street grid and lined it with new trees and benches. We put the new school’s building height along the new street, bringing a thousand new “eyes on the street” that would eliminate the gangs’ influence over public space. And we preserved most of the central stand of trees, landscaping the area as an amenity to the residents and a backdrop for the school.

At the groundbreaking we felt a sense of success. The plan was a result of an urban design process. We were not on the podium, we were not called out by name, but the shovels were transforming the city to accomplish our goals, the ones we distilled from our clients, the stakeholders. The simple urban design act of putting a city street back into the superblock of the public housing project was a statement that the isolation of public housing was a thing of the past. Placing a school on that street reconnected the children to the opportunity around them. Construction was on schedule, and Canada was satisfied with the process of urban design.

Alexandros Washburn, chief urban designer at the New York Department of City Planning, has been at the forefront of mayor Michael Bloomberg’s efforts to remake the city. His experience in politics, finance, and design began as a government staffer for Senator Daniel Patrick Moynihan of New York.