By: Fred A. Bernstein 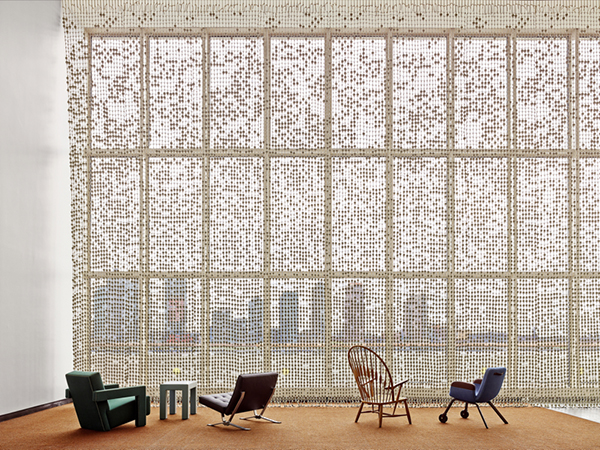 The furniture mix includes her own pieces as well as classics. From the left: The Utrecht chair by Gerrit Rietveld, coffee table by Joep van Lieshout, vintage chair from the existing U.N. collection, Peacock chair by Hans Wagner, and U.N. Lounge Chair by Jongerius.

In September, the Dutch-born designer Hella Jongerius was toasted by Ban Ki-moon, the secretary-general of the United Nations, and Queen Máxima of the Netherlands, for her latest accomplishment: the refurbishment of the North Delegates’ Lounge at the U.N., a large rectangular room where, in the words of the secretary-general, “there have been many diplomatic breakthroughs over cocktails.” The following night, she ﬂew home to Europe in a business-class cabin of her own design—after KLM Royal Dutch Airlines rerouted a plane to JFK just for that purpose. (So far, five of the airline’s 22 747s have gotten the Jongerius treatment.) Over coffee a few hours before her ﬂight, at a Manhattan hotel, Jongerius said she had visited mock-ups of the cabin many times, but this would be the ﬁrst time she would see the colors she had chosen at a cruising altitude. “Above the clouds,” she said excitedly, “the light is totally different.” 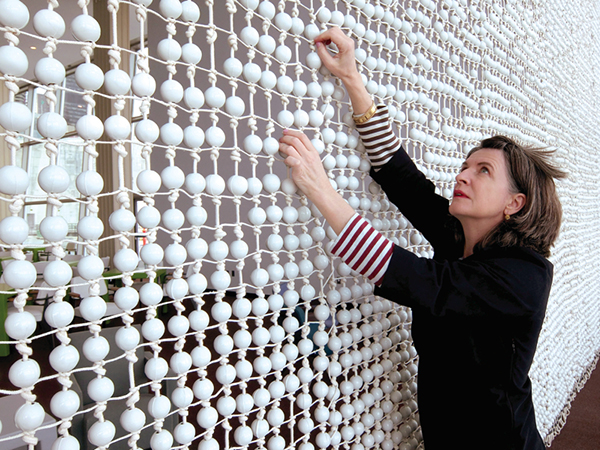 Jongerius inspects the Knots & Beads curtain after its installation in the lounge. Jongerius shaped by hand the original beads used for the molds.

But Jongerius’s life isn’t always so glamorously high-ﬂying. Describing her renovation of the Delegates’ Lounge, as head of a team that included Rem Koolhaas and the graphic designer Irma Boom, she recounted a multiyear process during which one idea after another was shot down. A series of architectural interventions by Koolhaas that would have added complexity to the overly boxy room were deemed too expensive (the budget was $3.35 million, contributed by the Dutch government). And nonarchitectural methods for breaking up the huge space were rejected by the U.N.’s security experts, who wouldn’t allow anything in the room to rise above eye level (so much for room dividers, or even the high-backed chairs by Jurgen Bey that Jongerius had settled on). That left the designers to create intimacy, to the extent they could, with furniture groupings that are as colorful and textured as possible. Jongerius created a palette consisting of, she says, “contemporary variations of the greens, the blues, and the reddish-browns” that predominated in the original 1950s United Nations, and had new fabrics created in those colors.

In the end, Koolhaas was allowed to remove a mezzanine at the far end of the room—it was inaccessible to the disabled and had blocked views of the East River—and design a bar and information desk of white resin. Jongerius outﬁtted the room with furniture covered in the new colors, including her Polder sofas, based on Dutch topography, and other pieces created speciﬁcally for the space. Those include her “bubble” desk—a wooden work surface with an acrylic half-sphere meant to shield a desktop computer—and a new chair with wheels on the front legs that allow it to be rolled around as needed. (She did bring in classic pieces by Hans Wegner, Jean Prouvé, and Charles and Ray Eames, ﬁguring the room would still be “Dutch enough.”) Jongerius also designed the shade that covers the 23-foot-high east wall, a grid of yarn bearing thousands of porcelain beads, made by the oldest company in the Netherlands, the Royal Tichelaar Makkum. Louise Schouwenberg, a writer and curator who served as a member of Jongerius’s team, says, “The beads bear traces of the production process; you have a tactile experience. That creates intimacy on a detail level.” 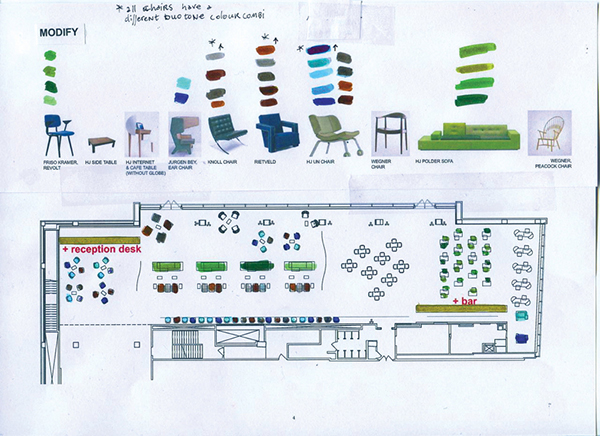 An early scheme for the furniture’s color palette.

The other window wall, facing north and tilted inward at about 15 degrees, was given over to Boom, who created a set of gridded shades that hug the glass. (The room’s original drapes hung vertically, creating a large pocket of wasted space and obscuring one of the room’s few architectural ﬂourishes.) Boom says she based the new shades on her surroundings—“Manhattan is all about grids”—and, during the dedication ceremony, marveled at their ability to turn everything outside, including clouds, into pixelated scenes. The visual artist Gabriel Lester, the ﬁfth member of the team, took charge of the expansive south wall, home to four gigantic artworks (gifts from U.N. member states). Lester chose not to rehang the pieces, including a tapestry of the Great Wall of China, directly on the wall. Instead, he created metal frames  to support them about a foot away from the wall, as if keeping the vaguely kitschy tableaux at a distance. 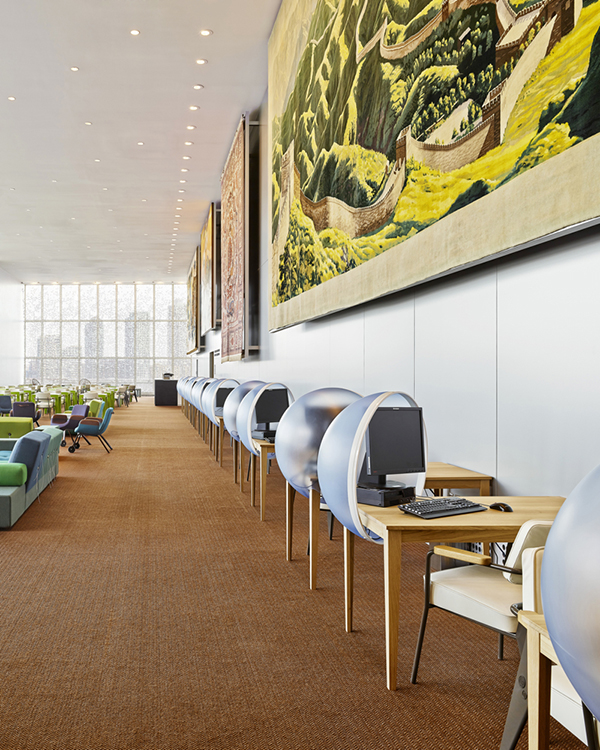 The view from the entrance, toward the east window of the lounge. On the right are the Sphere tables Jongerius designed for the lounge. The artworks are hung about a foot from the aluminum-clad wall.

The project began when the U.N. started planning the renovation of its 61-year-old complex. Several member states decided to make special contributions to the effort. (The Danish government restored the Trusteeship Council Chamber, a meeting room designed by one of Denmark’s midcentury stars, Finn Juhl.) For the Dutch, refurbishing the Delegates’ Lounge would provide a high-proﬁle showcase. The country’s culture ministry asked Jongerius and three other designers to form teams to compete for the commission. Jongerius had just ﬁnished working on a monograph with Boom as designer and Schouwenberg as editor, and tapped them for the project. The three women decided the team needed a great architect—if possible, one as great as the architects Le Corbusier and Oscar Niemeyer, who had contributed to the design of the U.N. complex. To them, that meant Koolhaas, who had extolled the U.N. in his seminal book Delirious New York. 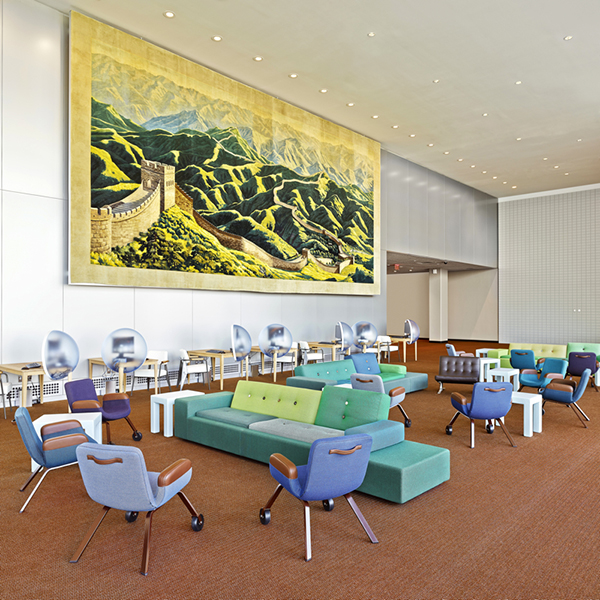 Vitra will soon release Jongerius’s wheeled chairs (without the wheels).

After Boom, who teaches at the Yale University School of Art, examined and photographed the room, the group began meeting at her studio in Amsterdam on Saturday mornings. (Both Koolhaas and Schouwenberg live in Amsterdam; Jongerius is based in Berlin; and Lester splits his time between Amsterdam and Shanghai.) They went through a number of schemes before settling on the one that Jongerius and Koolhaas eventually presented to a jury in The Hague. That jury of government ofﬁcials and culture mavens included Aaron Betsky, the former director of the Netherlands Architecture Institute. 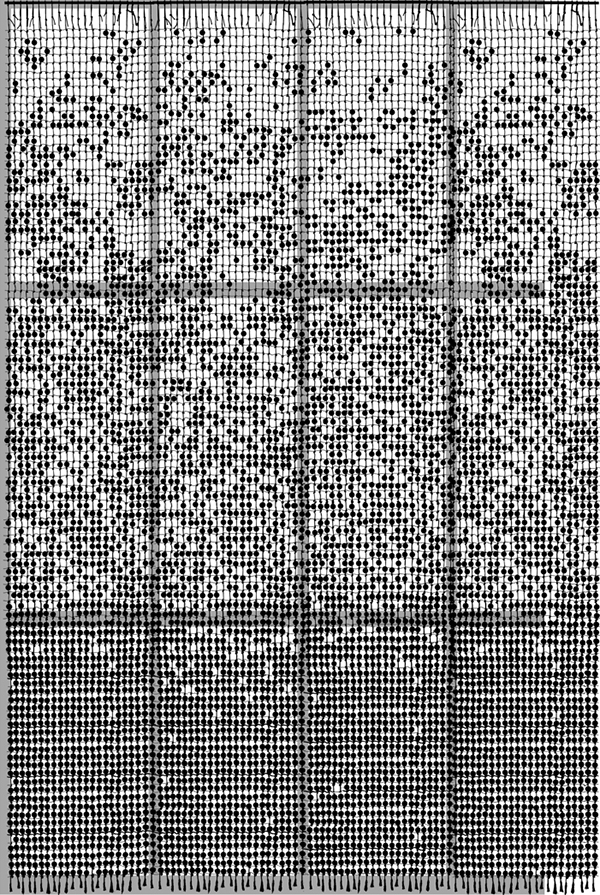 The design of the curtain is more dense at the bottom (to block views from the outside) and more open at the top.

Once the team was selected, the focus shifted. For the Dutch government, the goal was to show off Dutch design; for the U.N., the goals were practicality and safety.
Assistant Secretary-General for the Capital Master Plan Michael Adlerstein (the New York architect responsible for the renovation of the complex) and his experts were uncompromising on the security front. “You’d show them a design, and they’d say, ‘Well, because of what happened in Mogadishu…’” recalls Schouwenberg. Indeed, the drape with the porcelain beads—one of the key features of the refurbished room—was almost nixed because ofﬁcials imagined each of the beads becoming a projectile in the case of a bombing. (It was eventually permitted, so long as it was made to be removable.)

Then there were budget constraints. The Dutch government paid its $3.35 million to the U.N. The money, Jongerius says, bought much less from contractors chosen by Adlerstein’s ofﬁce than the team had projected. Koolhaas was allowed to remove the east mezzanine. But he had hoped to build another mezzanine near the entrance to the room (creating a kind of compression and release as guests arrived under the lower ceiling). Another unrealized Koolhaas plan involved hanging the four huge artworks off a one-meter-deep balcony, adding a bit of spatial layering to the room.

For Jongerius, the project will bring future beneﬁts. Her bubble desk—formally named the Sphere table—is already being sold by Vitra. And her wheeled chair will be introduced by the company in Milan next spring, though without its most prominent feature, the wheels, and without its current name, the U.N. Lounge Chair (the international body guards its trademarks). Jongerius isn’t happy about the loss of the wheels, but she isn’t complaining. “I don’t see it as a compromise,” she says. “I see it as using my creativity to ﬁnd solutions. I’m ﬂexible.” Indeed, as she walked into the room for the dedication party—knowing her furniture had been rearranged for the event by U.N. functionaries without her input—she said she wasn’t afraid of what she’d ﬁnd.  “However they did it,” she said, “I’ll be happy.”