Hitchcock and the Architecture of Suspense

‘The Wrong House’ investigates how Alfred Hitchcock used architecture to create suspense in his films.

Hitchcock on the set of Rope, with actors Jimmy Steward, John Dall, and Farley Granger.

In the films of Alfred Hitchcock, things happen, but the events that gave rise to them are easily forgotten. You quickly forget how A leads to B or, say, by what elaborate means Roger Thornhill ends up at Mt. Rushmore in North by Northwest. But as the French filmmaker Jean-Luc Godard observed, the Hitchcockian cinema compels not with story, but with images—the open-palmed hand reaching for the door, the simulated fall down the staircase, the whorling retreat of the camera from a dead woman’s face. These stark snippets imbue the films with their uncanny allure and imprint themselves in the mind of the spectator much more effectively than any of the master’s convoluted plots.

In his newly re-printed book, The Wrong House: The Architecture of Alfred Hitchcock, Steven Jacobs expands on this insight. The volume, based on a 2007 exhibition of the same name, unpacks the architectural imagery of several Hitchcock titles, spanning his early American works like Rebecca and Suspicion on through to the later Hollywood blockbusters of Vertigo and The Birds. It does so, on the one hand, through exegesis, whereby Jacobs calls on figures like Walter Benjamin and Gaston Bachelard, not to mention a supporting cast of Hitchcock scholars, to substantiate his readings of the films. On the other, and more to the claims of the book—positioning the filmmaker as a kind of “non-architect,” a term both accurate and not—Jacobs produces floor plan drawings that recreate several of Hitchcock’s most memorable studio sets.

In the former analysis, the author traces Hitchcock’s development as a filmmaker and that of his cinematic language. Like many other commentators, he makes much of the fact that the young Hitchcock worked as a set designer in the 1920s in Weimar Germany. While a stage designer, Jacobs argues, Hitchcock not only digested the expressionist aesthetic then de rigeur in German cinema, but also experienced first hand the dynamics of the studio system and all the control implicit in it. “German cinema was more architectural, more painstakingly designed, more concerned with atmosphere,” Jacobs writes, quoting the Hitchcock biographer Patrick McGilligan. 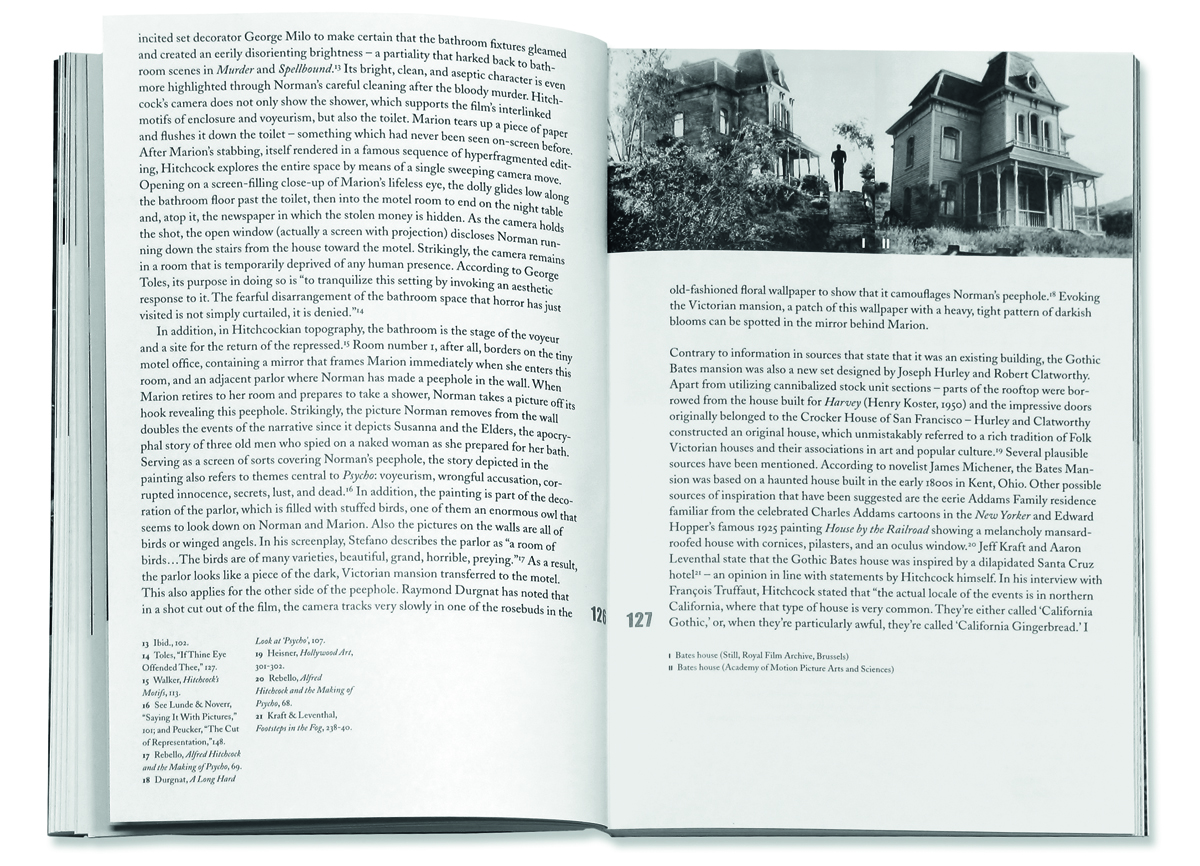 The Wrong House: The Architecture of Alfred Hitchcock investigates how the master filmmaker used art direction, set design, and architectural elements in his films.

Jacobs, however, breaks with others over the degree to which Hitchcock can be seen as the successor of expressionism. Although he would incorporate moody elements of the genre in nearly all his films—in the use of shadows or perspectival shifts, for example—Hitchcock was very much given over to a different strain of German filmmaking, the Kammerspielfilm. Where expressionism employed highly stylized sets at the service of an exaggerated plot, the Kammerspielfilm, or “chamber drama,” cast a meticulous eye on the “life of individuals in everyday claustrophobic environments.” This anal attention to detail, of course, tinges every one of Hitchcock’s films. “The combination of intimacy, careful exploration of domestic interiors, use of highly charged objects, and mobile camera work,” which Jacobs says characterizes the Kammerspielfilm, were to become hallmarks of Hitchcockian suspense.

The director’s so-called “German background” thus conditioned his methods of work for decades to come, regardless of the house studio to which he belonged at the time. Most importantly, his time at the UFA studios deepened his appreciation for art direction, to the point that, for him, the set itself could be made into an active character in the narrative. A set’s design could both accommodate the specificities of the script while also influencing the actors who inhabit it. Architectural constructions and details, however, were necessary in fleshing out this key role. 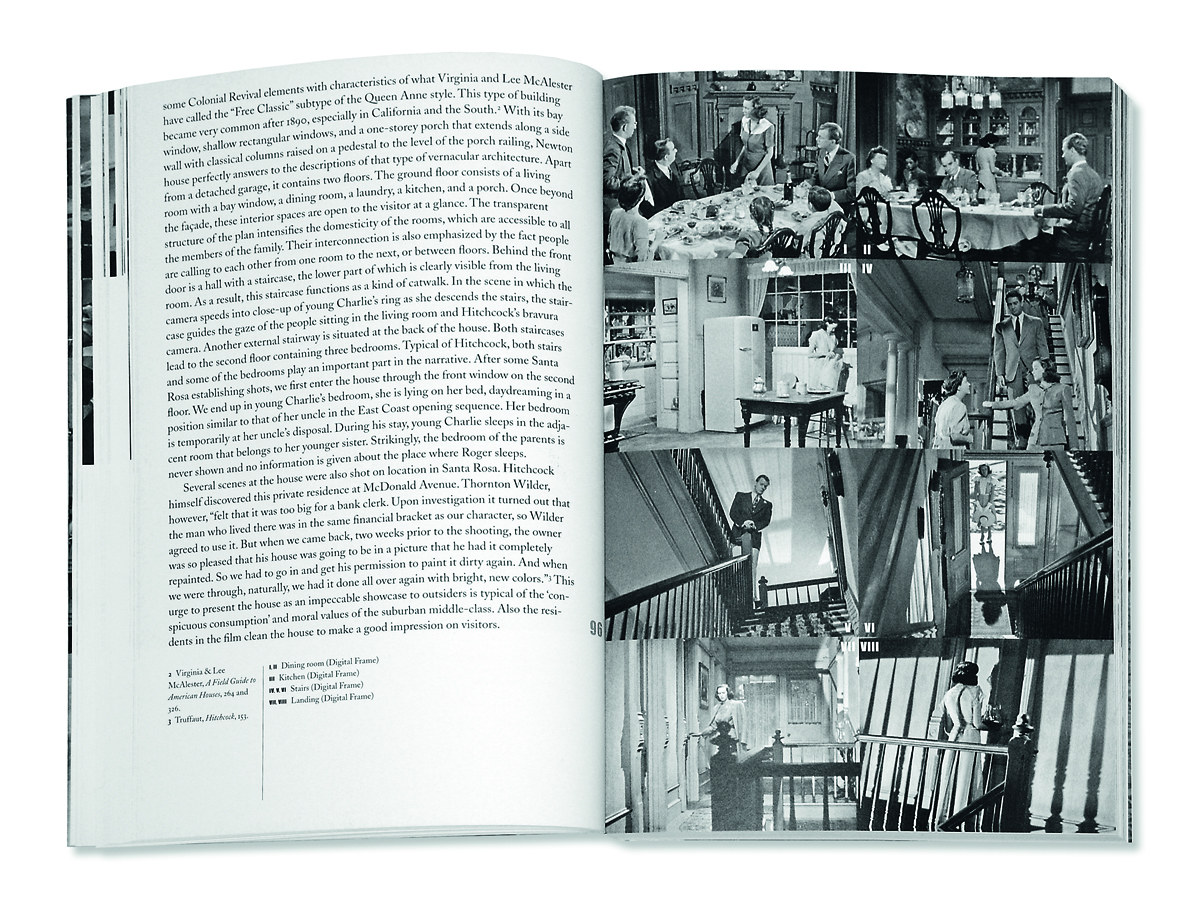 On one level, this can be accomplished by the manipulation of symbolically charged objects. In a Hitchcock film, a door handle or a set of keys can be reimagined as one of the many “fetish objects” that precipitate a moment of suspense or psychological fracture. “These architectural motifs,” Jacobs explains, “often relate to specific narratives or plot constructions such as a secret that is hidden within the confines of the house and the family.” A window illuminates the interiors of a house or apartment, while also promoting, even inviting the compulsive voyeurism that drives Jeff to near ruin in Rear Window. Similarly, a staircase not only connects “the semi-public spaces of the house with the strict private environment of bedrooms,” but, for this reason, portends deep familial crisis.

But Hitchcock wasn’t satisfied in just set dressing. As he wrote in an entry for the Encyclopedia Britannica, “an art director must have a wide knowledge and understanding of architecture.” This conviction is evident in the detailed designs of Hitchcock’s sets, like those featured in Rope, Rear Window, Psycho, and many others. As Jacobs shows in twenty-six floor plans produced exclusively for the book, Hitchcock was very much conscious of the architectural plan and its role in a scene. That isn’t to say he put great store by the ideological or functional implications of the plan. Rather, he used it as a blueprint on which to plot a film’s psychological content and choreograph its dramatic movements. 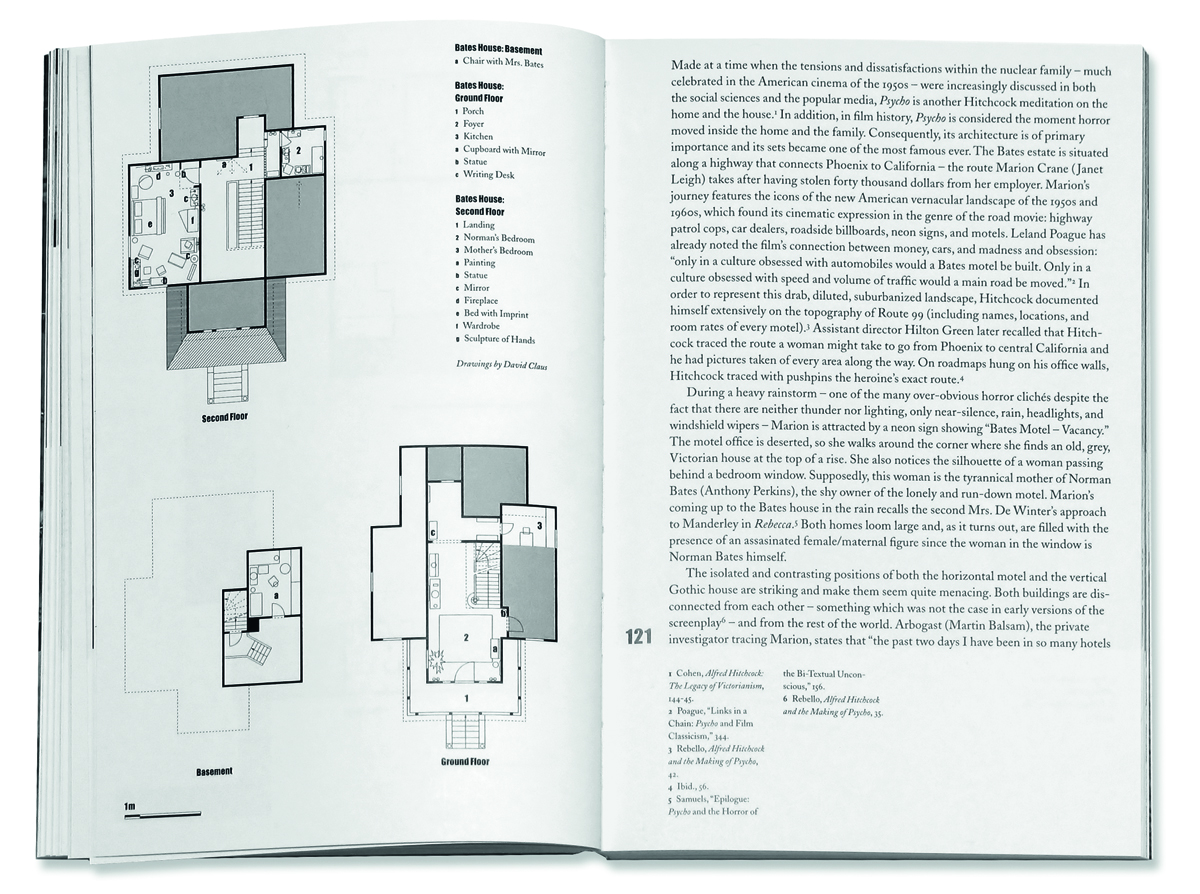 The floorplans of the Bates house. Note how small Norman’s room is compared with his mother’s.

The drawings are “reconstructions of spaces that never existed,” Jacobs says, and as such, they don’t always make sense architecturally. Sets like Manderlay, the mansion in Rebecca, are plagued by inconsistencies, many of which are nonetheless impossible to spot on the screen. Superfluous sectional changes and baroque nooks are introduced to accommodate the sweep of the camera or, in many cases, a single camera position. Even when the sets are consistent, their design reveals the hand of a particularly inept architect. The plan for the Bates house in Psycho, for instance, gives you an idea about how oppressively small Norman’s bedroom is. Similarly, the rooms in the adjacent motel aren’t laid out in an efficient manner, with the bathtub in Room 1 invading the neighbor’s living room. 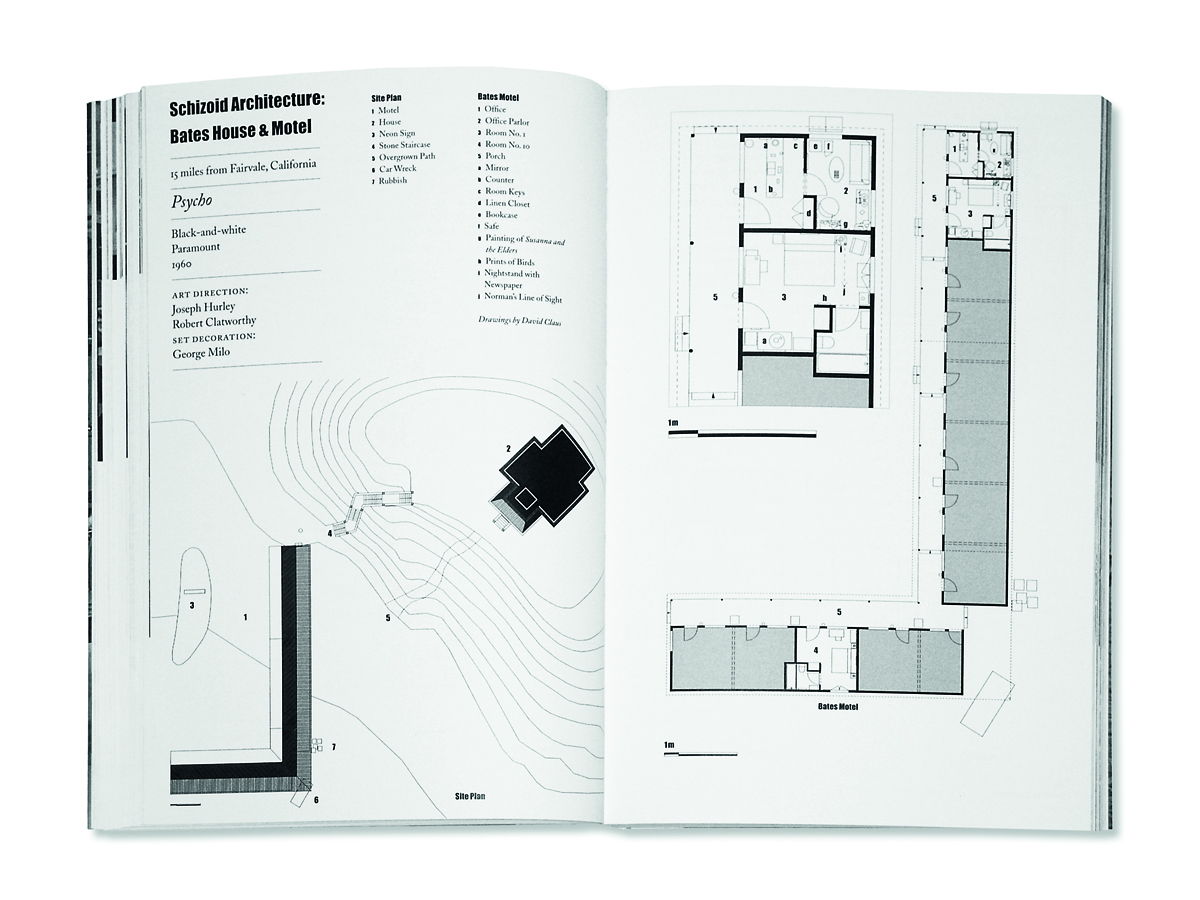 The plan of the Bates compound. The hunched over, Gothic house contrasts with the modern, L-shaped order of the motel.

Yet, while they may falter on paper, the plans reveal more ambitious concerns. In Pyscho, the sets’ composition embody physical Norman’s split, fractured personality in a way that’s not immediately apparent, but gradually made clear. Citing Slavoj Žižek, Jacobs points to the “schizoid architecture” found on the Bates’s property and how the buildings are spatially related to each other. The imposing, but crumbling house on the hill is juxtaposed against the rectilinear geometry of the motel strip. Norman’s frail mental state is a direct result of “his inability to locate himself between the anonymous modernist box of the motel and his mother’s Gothic house.” Or to quote Godard once more, here, between these two architectural extremes, lies “the tangible terrain of one’s uneasiness.”

Jacobs’s book is an excellent source on Hitchcock and film history. Its chief provocations—that architecture can be equated to set design, or that Hitchcock was a kind of architect—are nominally justified if not entirely original. That said, the book is a great achievement in Hitchcock scholarship, and it should be commended for taking its source material as seriously as it does.

A new re-print of The Wrong House: The Architecture of Alfred Hitchcock, out on nai010 publishers, is available now.