Students in the university’s Regenerative Building Lab designed an innovative island-based research station for their peers in the sciences. 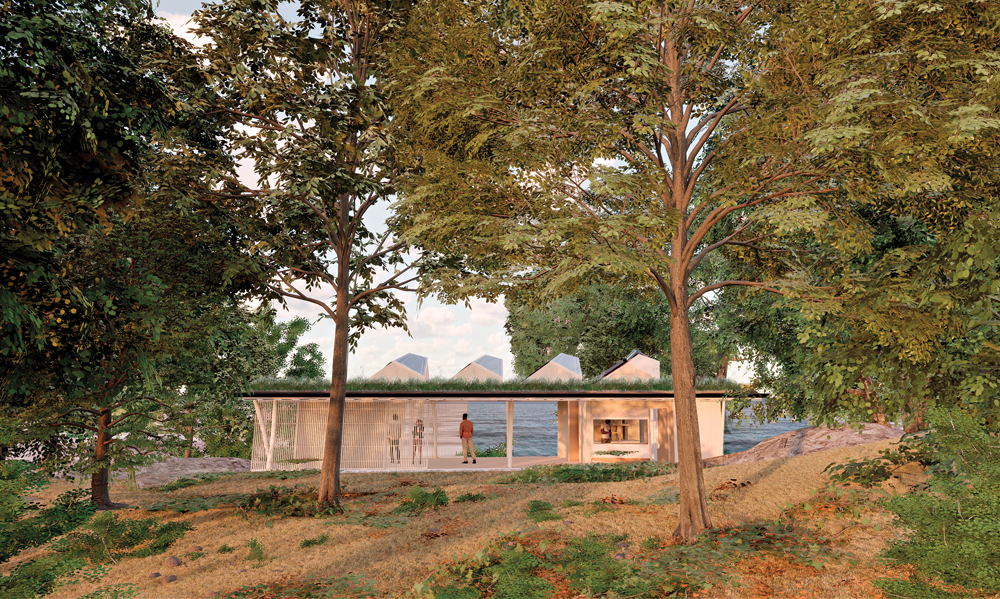 On Horse Island, one of more than a dozen rocky outcroppings that make up Branford, Connecticut’s Thimble Islands, an unusual construction project is taking shape. Rather than the shingle-clad summer homes perched on neighboring islands, a low-slung structure with polyhedral forms protruding from its planted roof distinguishes this island’s jagged coast. Horse Island isn’t a destination for vacationers; it’s earmarked for researchers.

Ever since Yale University bought the land in the 1970s, it has been using it to research the flora and fauna of Long Island Sound’s estuarial waters and learn about the rocky intertidal zone. Before that, only the island’s lack of facilities kept would-be researchers away, explains Dave Skelly, director of the Yale Peabody Museum of Natural History—the institution that manages the island—and a professor of ecology and evolutionary biology. Getting a composting toilet permitted and installed removed one major barrier and proved to Skelly that the site was worth further investment. “It became clear that if there was a way to make it easier for people to get out there, to do research out there, there was a lot of interest,” he recalls.

He and Alan Organschi, partner at Gray Organschi Architecture and senior critic in design technology at the Yale School of Architecture, dreamed up the idea of building a small research station that could serve as a classroom and a base for scientific explorations.

Organschi thought the project would also be a good opportunity for students in the regenerative design lab he runs with Deborah Berke, the architecture school’s dean, to apply some of their own research.

“It’s not a great model for dealing with the urbanization of 2.3 billion people, but what [this project] does is give students a really direct experience with the kinds of questions in building that need to be addressed in the next 30 years or we’re essentially screwed,” he says.

A site was selected on the northeast point of the island, then students spent the spring of 2020 designing the single-level rectilinear structure with a large classroom whose sliding doors could be opened to the fresh air. Future researchers spending the night could also use the building’s two sleeping alcoves and compact kitchen. Solar panels and a composting toilet were included to take care of power and sanitation for the off-grid location.

Construction began last summer, with the students prefabricating the building’s major components off-site before bringing them to the island by barge. Held up by pandemic-related material shortages and the site’s unique challenges, construction now continues with a dedicated group of students and recent graduates helping to put the finishing touches on the structure before the end of this year.

Their biggest innovation, and the building’s most striking feature, is a set of four “barnacles” on the roof. These multipurpose polyhedral forms will act as wind scoops, improving ventilation for the building below; support solar panels angled toward the south and east, where sunlight is strongest; and function as skylights to add daylighting deep within the space.

Principles of regenerative design and circularity were guiding forces behind the group’s selection of materials: cross-laminated timber (CLT) scraps and offcuts that were otherwise headed for the landfill, hemlock harvested from the experimental Yale-Myers Forest operated by the Yale Forest School at the School of the Environment, and reused windows from the Peabody Museum.

“The circular economy mimics biological cycles in nature,” explains Louis Koushouris, a student in the Yale School of Architecture’s class of 2022 who has been working on the project. “You can use technical materials in the building environment the same way. [We sourced] all renewable materials. Another principle was design for disassembly, which is the idea of being able to take apart the building and repurpose and reuse its materials in a future project.” With that in mind, elements were fastened with bolts and screws instead of nails and adhesives.

“Part of the study was trying to understand how to describe the building life cycle from extraction or harvest to disassembly and hopefully reuse,” says Organschi. In addition to reused components, some materials were extracted from the site itself: Stones were packaged into gabions, forming the bleachers of an amphitheater where outdoor classes and discussions will take place, while porch posts that ring the structure were made from sassafras trees that had to be cut to allow older trees to thrive.

“[The students] got to see how hard it is to move material and process it in a very immediate way,” says Organschi. He’s referring to how students harvested, debarked, kerfed, and installed the sassafras porch posts, but he could just as easily be talking about the entire process of regenerative building: It requires designers to think outside of traditional modes of construction.