A recent design collaboration between the Human Centered Design Program (HCDP) at Northern Michigan University (NMU) and the Lloyd Flanders furniture company of Menominee, Michigan demonstrated just how fruitful such collaborations could be. For the 2013 fall semester, nine students merged their ivory-tower pursuits with real-world experience. Under the design leadership of HCDP head, Peter Pless, the project was supported by a Michigan Initiative for Innovation and Entrepreneurship grant, and allowed students to work directly with industry professionals to develop furniture prototypes.

Lloyd Flanders, a decades-old manufacturing firm with national reach, is recognized for its signature woven wicker furniture designed for indoors as well as outdoors. The company’s project goals were two-fold: the students would develop a casual outdoor furniture prototype and Lloyd Flanders would get fresh design concepts aimed at a young demographic. “This is a major partnership for our program,” stated Michael Cinelli, Associate Dean and Director, NMU School of Art and Design.  “Not only are we providing students with direct experience with a major manufacturer, but we are also demonstrating how our university can provide new ideas to existing companies that lead to new products and therefore more jobs [in our area].”

One non-negotiable element was that the students’ designs had to incorporate wicker, a 40-lb. twisted craft paper that is woven on Lloyd Flanders’ specialized looms. “The biggest challenges were related to [our] limitations due to our Lloyd loom ‘fabric’,” explained Lou Rosebrock, the company’s senior vice-president of sales and marketing. 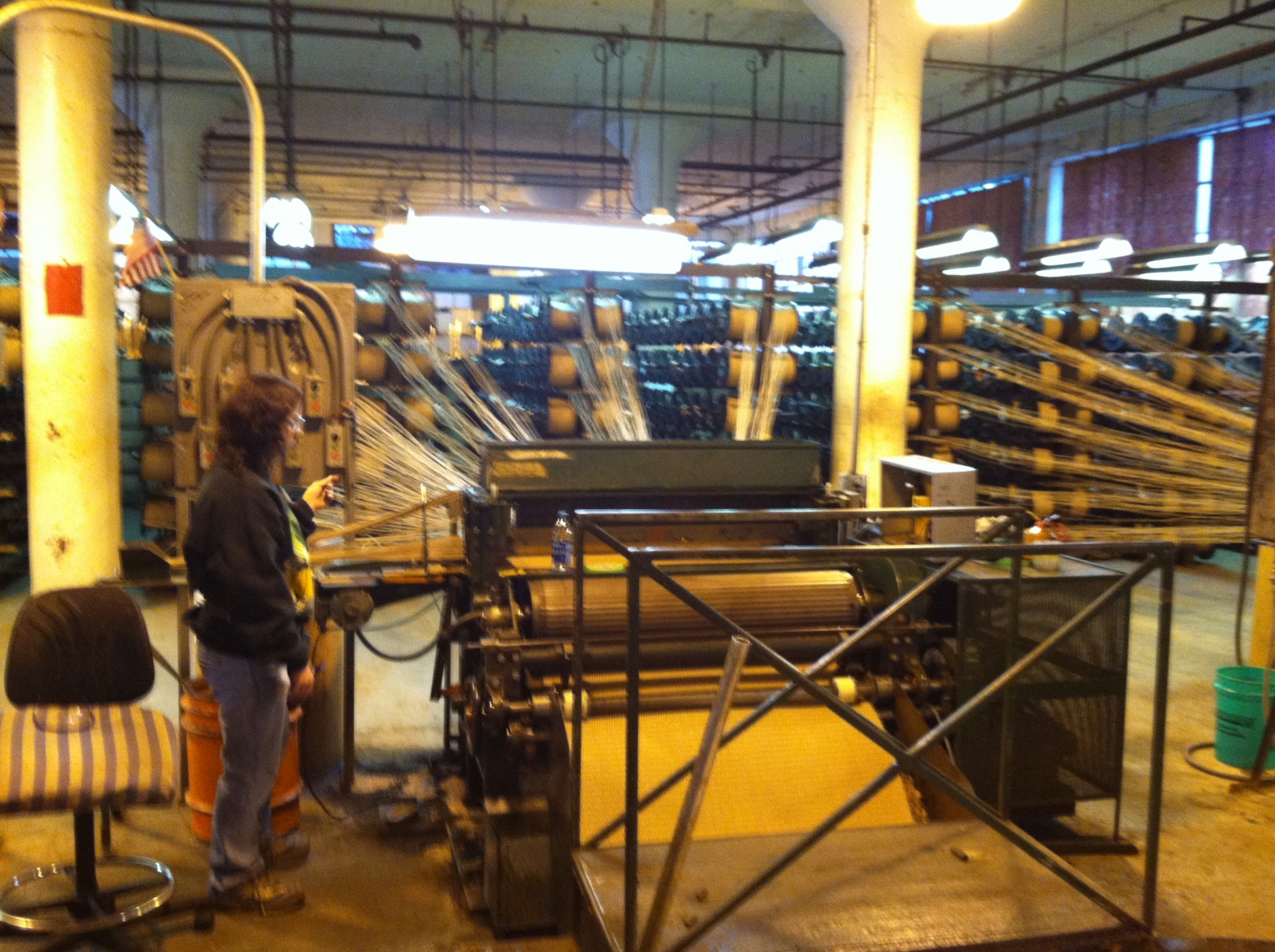 Student Paige Doolin from Birmingham, Michigan agreed, “The major challenges I came across mainly involved the constraints of our given materials. While designing a form on the computer, I still had to be mindful of how the loom material would move and attach to my frame, how much frame would be exposed at eye level on the finished product, and if the dimensions would be ideal for their painting processes.” 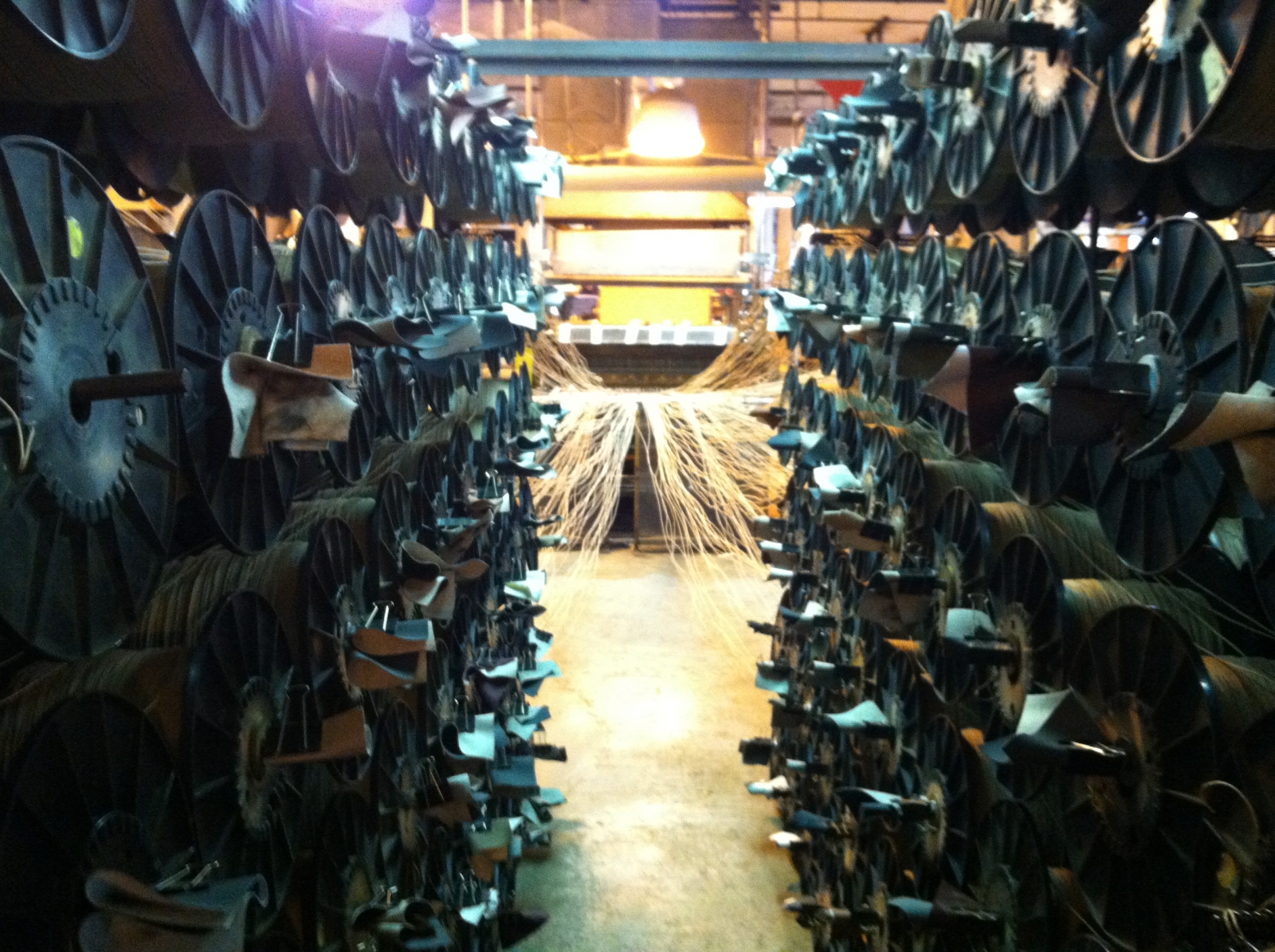 The students did it all. The first four weeks were dedicated to research. Then, with Pless they visited the Casual Furniture & Accessories Market trade show at Chicago’s Merchandize Mart, where they sized up the competition and also explored furniture showrooms, including Lloyd Flanders. “They discovered ways to be unique competitors in the field,” explained Pless.

The following week they toured the Lloyd Flanders’ Menominee factory to see firsthand the work dynamic of a furniture manufacturing company. Two weeks later Rosebrock and R&D specialists, Greg Hayward and Bob Nordquist, visited NMU to review the students’ drawings and offer input. Over the next six weeks, students sent their CAD drawings to Lloyd Flanders engineers who produced them as prototypes. In-house workshops ensued where the students and engineers discussed practical and aesthetic issues and identified modifications that would make their designs more effective for production. “It was amazing. By the time we got to Menominee, the prototypes were done,” states Pless. “These day-long workshops allowed the students to enhance their designs, get feedback and explore ergonomic, structural and aesthetic issues.” 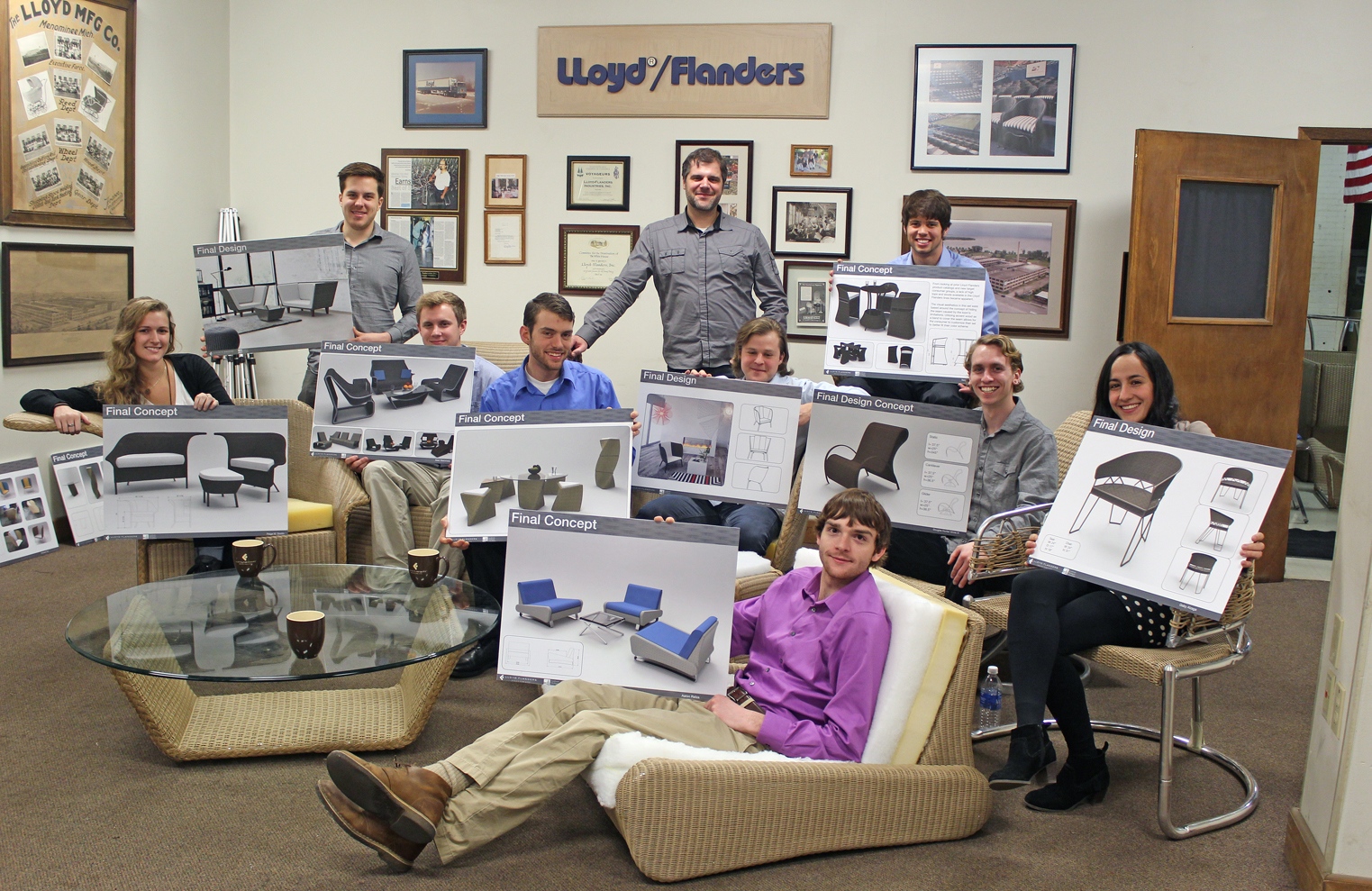 After revisions, the students presented their final designs to Rosebrock, Hayward, Nordquist, Pless and owner Dudley Flanders. Of the nine designs, four chairs and one table were selected for further development. “It was a great experience for Lloyd Flanders,” commented Rosebrock. “Our product development team was especially pleased to work with the students who showed a fresh approach to working with our Lloyd loom. While all designs the students presented were fresh and creative, not all could be engineered to be totally functional. They showed to us how simplicity is often the most creative approach to design challenges.” 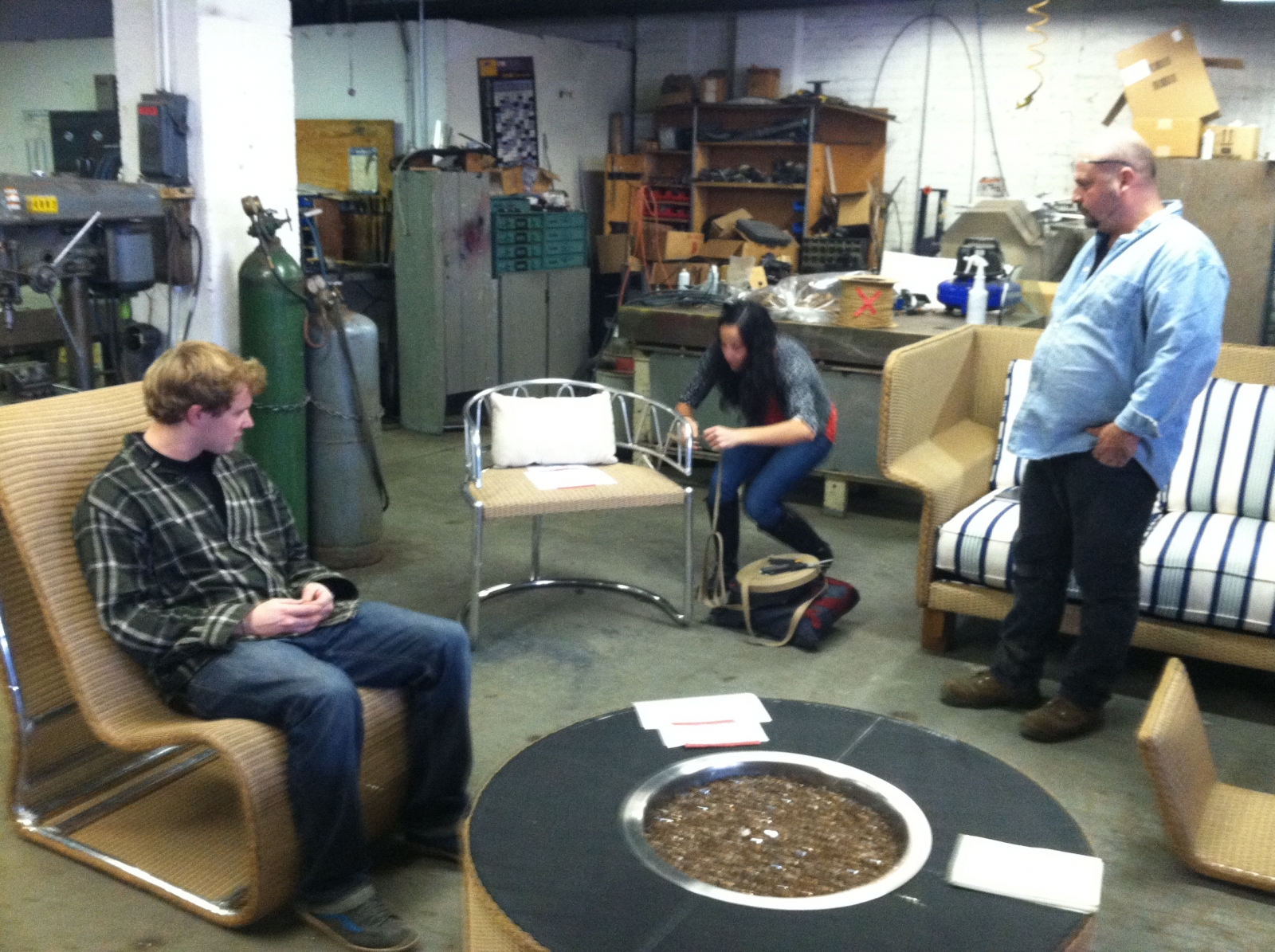 The amount of time the Lloyd Flanders employees contributed to the development of the students’ prototypes was appreciated not only by Pless—“I was shocked how much they did. They treated us like royalty.”—but also valued by the students. “We sent them our construction drawings, and several days later we were able to see, sit in, and alter a full model of our designs,” stated Doolin. “It was an amazing experience witnessing how my drawings translated to another person, allowing them to build just what I was hoping for. We also discussed what parts were feasible from a financial standpoint. All the breakthroughs and challenges of working with a business provided fantastic lessons and insight into product design for the real world that I believe you can only gain through an experience like this.” 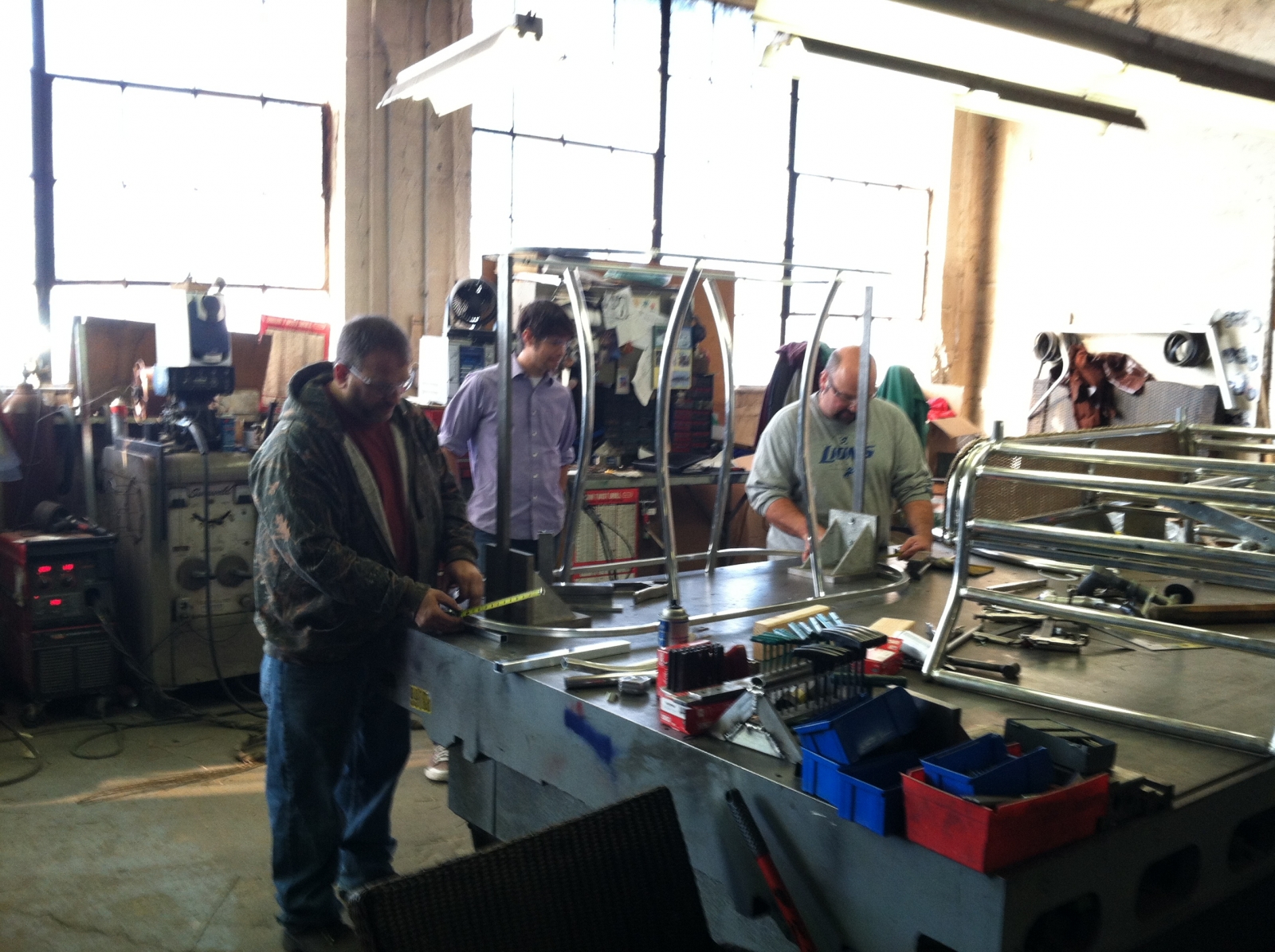 “Designing for a ‘real world’ situation forced me to narrow in on the purpose of my designs,” Doolin explained. “It made me think that my final product could not be just a ‘concept’ that in theory would work. Instead my final design had to target a certain person, and address their specific wants and needs, while also providing something unique.”

Cinelli concurred. “This was absolutely an enormous success for our students, faculty, and program. The dialogue and feedback with Lloyd Flanders was exceptionally beneficial to expose students to the practical implications of developing a product with material and manufacturing parameters from initial concept drawings to full-size prototypes.”

Is there a bright future for the NMU student prototypes? Lloyd Flanders hopes to show the five prototypes at a furniture event this coming autumn. And, if Pless has his way, the nine prototypes will be exhibited at New York’s 2014 International Contemporary Furniture Fair this coming May. Keep your eyes peeled.

Mason Riddle is a writer based in Saint Paul. She covers the visual arts, architecture, and design. Her reviews and articles have been published in Architectural Record, Architecture MN, Artforum, Dwell, The Star Tribune, Public Art Review and Rain Taxi, among others. Her article, Game Plan, explored the textile work of Alighiero Boetti in the Italian conceptual artist’s MoMA retrospective and appeared in the winter 2013 issue of Surface Design. She is former director of The Goldstein Museum of Design and MN Percent for Art in Public Places program. Her previous POV posts have covered Public Interest Design at the U of Minnesota, and John Lautner’s cabin, Midgaard in Marquette, MI.