A visit to the Koolhaas-designed student center in Chicago places our columnist in a real quandary. 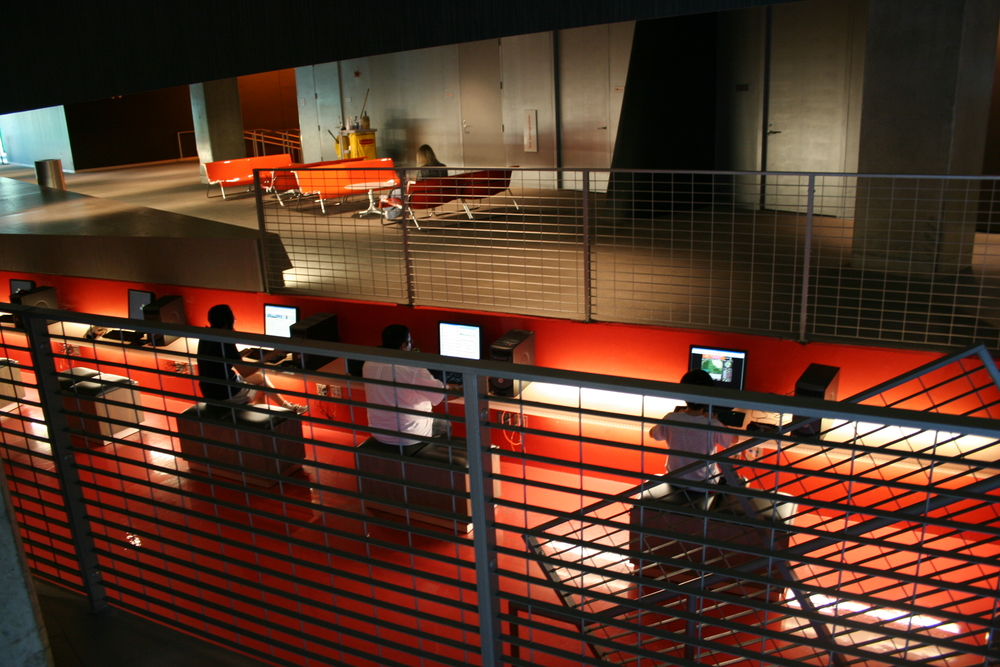 It’s too bad I stopped in for a snack at the Modern that night in November. For one thing, a special high-temperature oven was busted, and the restaurant, tucked into the Museum of Modern Art’s formerly new Midtown complex, could not serve its signature dish: a tarte flambé so perfect it had brought me and a friend in from Brooklyn. We were vaguely aware that the press opening for a monographic show on Rem Koolhaas’s CCTV tower (in progress in Beijing) was taking place later on next door, up in the museum proper. But as we ate our second choices at the bar, we still had not decided if we’d go.

I was hesitant because I didn’t want to be disappointed, to have to return to those dark days when at the very mention of Rem’s kooky name I saw red. Two weeks before, at the Illinois Institute of Technology (IIT) for a conference on skyscrapers (they are very tall and getting taller; sometimes they have funny shapes), I had visited the building Rem and his team completed on campus in 2003: the student center with the rambling plan, weird materials, and an El line tunneling through the roof. It was awesome—I loved it like I haven’t loved much lately, loved it much more than any other Rem I’d ever seen. I didn’t want to break the spell.

As with so many of Koolhaas’s buildings, the pretentious preamble and sundry egotism of the design and construction phases had prejudiced me against the finished work. Years ago during the long campaign (OMA got the job in 1998), when the student center was subjected to some much needed economic rationalization at the behest of its clients at IIT, I got my hands on a lovely little book Rem and his minions put together to argue for the retention of certain design elements. “Endangered,” it screamed on every other page, the word stamped over an image of some trifling detail that those writing the checks had decided they could no longer afford. It was hysterical—in both senses of the word—and totally obnoxious. Professionalism had given way entirely to artistic pique. Would the building really suffer if some exotic finish (there was concern about the possible loss of the aluminum flooring) could not be applied in the end? Shouldn’t the Architecture be integral to the architecture, not contingent on its vulnerable surfaces?

Can I not, one might also ask, separate the tics of a genius personality from the work of a genius? No, I would proudly respond, I cannot. And neither should you: when a building is itself leveraged on the personality of its builder—as it always is in the case of Rem and so many others who need not be mentioned here again (okay: Peter, Zaha, Richard, Danny)—then that personality, tics and all, becomes part of what one must assess to understand the finished work.

But I forgot all that when I walked into the student center. And not only because they had pinball and it was pouring outside. I loved it—from the cheeky Mies portrait on the door (worked up as a pointillist collage of wayfinding symbols by graphics collaborators 2×4) to the devious section of the thing (the building sliding under the train and the cafeteria sliding in turn under the building), and the orange-hued honeycomb panels in the windows that look back across State Street, grabbing chance images of the classic Mies buildings there and pulling them in to be seen in a new light. Spunky decor and smart art history met on the same ground.

When a building is itself leveraged on the personality of its builder then that personality, tics and all, becomes part of what one must assess to understand the finished work.

Indeed there was a fun-loving intelligence at work throughout the building that was impossible to resist; the students, particularly those stomping on the Dance Dance Revolution machine placed to great effect in the middle of a main hall near the formal entry, were not resisting at all. They were psyched. And they were using the space, as they should, like the coolest living room in town. A friend of mine who has taught there for some time tells me that IIT desperately needed such a center—that before Rem’s building the site under the El was like a De Chirico in winter. More, he said that it works through prolonged use: he wasn’t yet bored with its tricks.

And then, that night at the Modern, the man himself appeared, lanking his way up to the bar with a pal and settling on a stool right next to us. They drank their coffee, lingered, had a mumbling conversation that even my eavesdrop-prone friend could not parse, then decamped upstairs to the show. My friend couldn’t help herself, though I wish now she had: her eyes fell on Rem’s bill and an insulting 11.6 percent tip.

And it all came rushing back. I remembered the harrowing stories of abuse from friends at OMA HQ in Rotterdam, how a postcard with the word “LIAR” mysteriously appeared on Rem’s door (to his credit he left it there for almost a year). I remembered my own visit to that office, with a pack of reporters, and how the grand man had sized us up and demanded we all sign nondisclosure forms lest some genius leak out from the sanctum itself (we refused). Rem was in his high anti-imperial phase during that visit in 2002, and I remember how he berated the largely American group with reactionary political ranting not worthy of a sophomore’s dorm room. Fine sentiments if better expressed, but perhaps pissing off the American press at a time when OMA had so many American buildings on the boards was not the wisest course. A report of that encounter soon appeared. Rem started building in China.

Then there was the more personal episode I had forgotten in my flush of Rem-love at IIT. There may have been some question just after it opened in late 2001, but I think we can all agree now that Rem’s Prada store in Soho has not revolutionized retail as it was meant to. The hybrid event-venue aspect of the design—taking up so much space and so many cords of zebrawood—never came off (there has been one art show there in all the years since: a retrospective of Miuccia Prada’s skirts). About six months before the store opened, I wrote much the same about the place—that it was overhyped and destined to fail—and Rem responded by calling me at home to yell at me. Very nice. I had not been unfair, and anyway I was right.

We did go up to the opening of the CCTV show that night. The gallery looked like a page torn from SMLXL—not a recommendation from someone who never saw the appeal of that book’s logic-masking graphic turmoil. There were the usual purposefully naive Rem-oid models and predictably clever renderings elaborating programmatic justifications for what in the end, I think we will see, is yet another OMA building driven primarily by a formalist impulse: a big shape, boldly cantilevered because it’s cool.

So here I am in limbo. I can’t forgive the man his foibles because I see them reflected in the arrogance of his work. And arrogance—in men and buildings—is bad. But I’ll always have IIT.