Inside VIA 57West, BIG’s First Building in North America

A hard-hat tour on Wednesday provided a peek into the interiors of Manhattan’s high-tech pyramid.

In midtown Manhattan’s West Side, on the banks of the Hudson River, rises a strange sight. VIA 57West, the new 940,000-square-foot luxury apartment complex designed by the Bjarke Ingels Group (BIG) and developed by The Durst Organization, is an improbable synthesis of incompatible geometries, pyramid plus cube.

From the north and east, the building, which opens next month, maintains a strict rectilinearity, the walls climbing 467 feet in the air. Walk around the corners, and these mighty walls give way to a vast vertiginous slope, descending from the building’s peak to near the pavement. You slowly realize that the warped plane is actually the roof of the whole complex. The surface, a matte-finished stainless steel, is pockmarked by terraces set flush to the sweeping parabolic slope, with an elevated park plunked down at its center. (Ingels insists on calling the building a “courtscraper.”) The stretch of the West Side Highway shoots past the long side of the structure, carrying a stream of car traffic. The feeling of the surrounding buildings, such as the power plant to the north, is industrial. The Hudson gleams in the distance.

It’s a thrilling panorama, and one that couldn’t possibly be matched by the building’s insides, or so you might think. A hard-hat tour on Wednesday provided a peek into the interiors, mainly of the generous amenity spaces and a handful of model units.

First, of course, was the lobby, which is bookended by sawtooth brick walls that hark to New York’s quintessential building material. Steel-wire mesh unspools overhead, while wood elements, such as at the Jenga-like reception desk and the timber-paneled mailbox alcove, add a Scandinavian counterpoint. A grand concrete staircase leads the way up to the rest of the complex.

The courtyard, no more than a heap of mud and crude landscaping at this point, tapers at a point at the stair’s top landing. With BIG, a garden can never just be a garden, in the same way that a housing complex must also be a mountain range; here, Ingels hopes to replicate Central Park in miniature, at a scale of approximately 1/13,000. (The rhetorical flourish reminds the resident, stranded out here at the edge of the island, that they are still in New York.) A meandering trail weaves its way through the 22,000-square-foot park, looping around puny boulders and an impressive number of plantings—in all, 43 different types of trees and 50 native plant species. Heavy rain obscured the views toward the Hudson, but that didn’t diminish the drama of the space. With three walls of apartments looming overhead, the courtyard feels like a canyon. 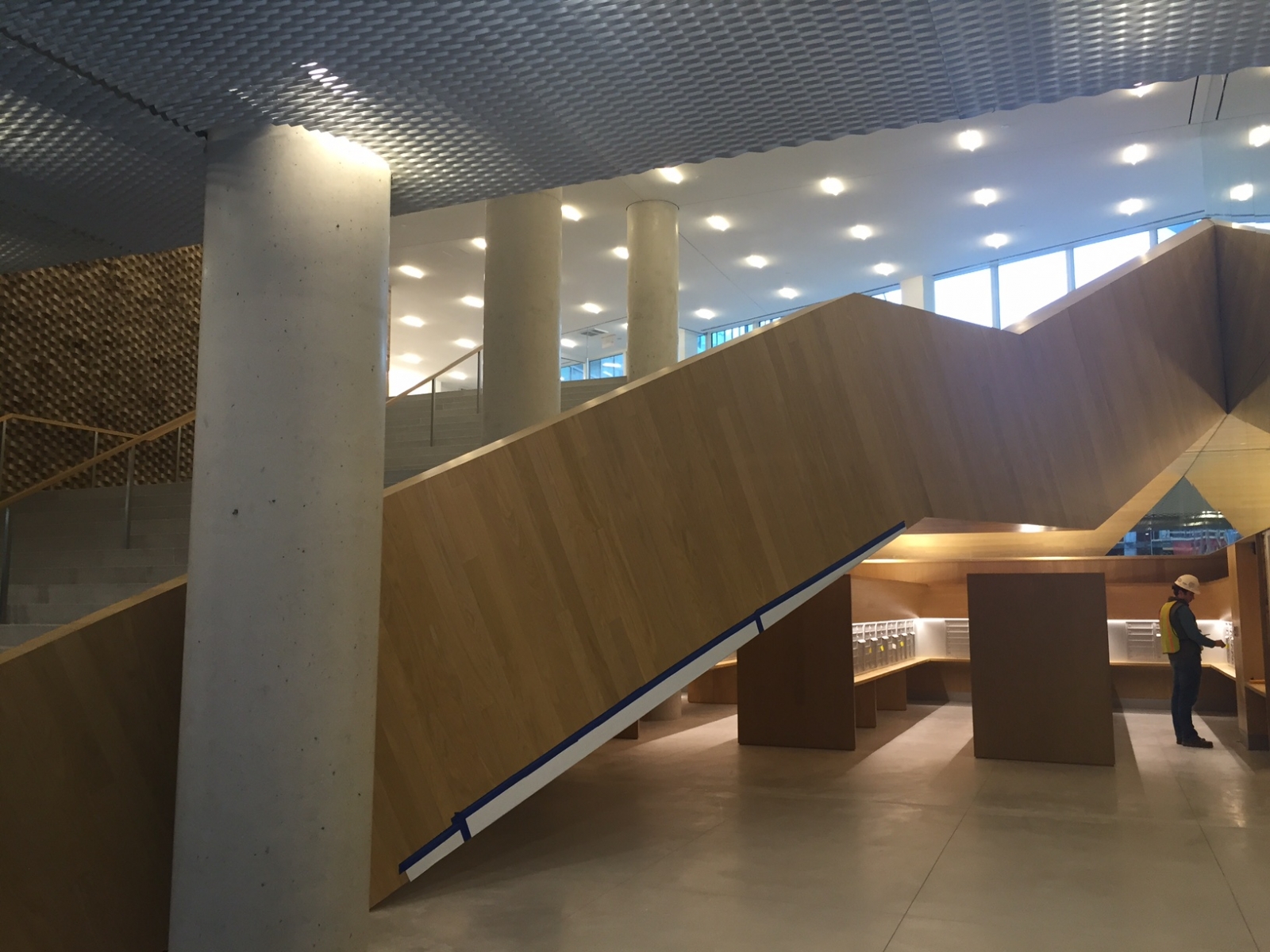 The entry staircase leads residents from the lobby to the building amenities and apartments.

The building’s 30,000 square feet of amenities are laid out in a ring around the base of the would-be park. Wooden accent walls lend the library and event space a chummy air, while the golf simulator room is as anonymous as it needs to be. The spacious lounge, which features a television and fireplace, looks out onto the industrial environs to the south and the river to the west. The swimming pool lay empty, as did the two fitness rooms, lacking, for the meantime, any gym equipment. A half basketball court completes the exercise facilities, and concludes the amenities wing, which also contains a crèche, screening room, a games room, and a poker room, which will be fitted out with casino-like touches.

The model units we were shown are situated opposite the amenities loop across the courtyard. These ranged in size from a 426-square-foot studio (monthly rent: $2900) and the 645-square-foot “double-alcove” studio ($3800) to the 1,135 square-foot two bedroom apartment ($7400). The latter isn’t as palatial as the numbers would suggest, due in large part to the wonky floor plate: Among VIA’s 709 apartments, there are 178 unique floor plans, generated by the building’s dynamic form.

The first residents will move in early March. They are the lottery winners of the building’s 142 affordable units—some 17,000 people applied for the apartments, which start at $565 a month. The affordable units themselves, our group of journalists were assured, are sprinkled throughout the complex, ostensibly fulfilling that bedrock liberal principle of the commingling of classes. (Unless, of course, the fee to use VIA’s amenities, which is not included in the rent, proves prohibitive to affordable-unit holders.) The residential corridors are plastered with a charmless wallpaper scheme—a labyrinthine Nolli plan repeated ad infinitum—designed by BIG and one of the firm’s few obvious missteps in the entire building.

VIA will soon be BIG’s first completed North American project, with several more, such as the outlandish Spiral tower (also in New York), to presumably follow. As for Durst, the project represents the organization’s forceful move away from commercial real estate into rentals. When finished VIA will undoubtedly mark a marquee project in the portfolios of both. 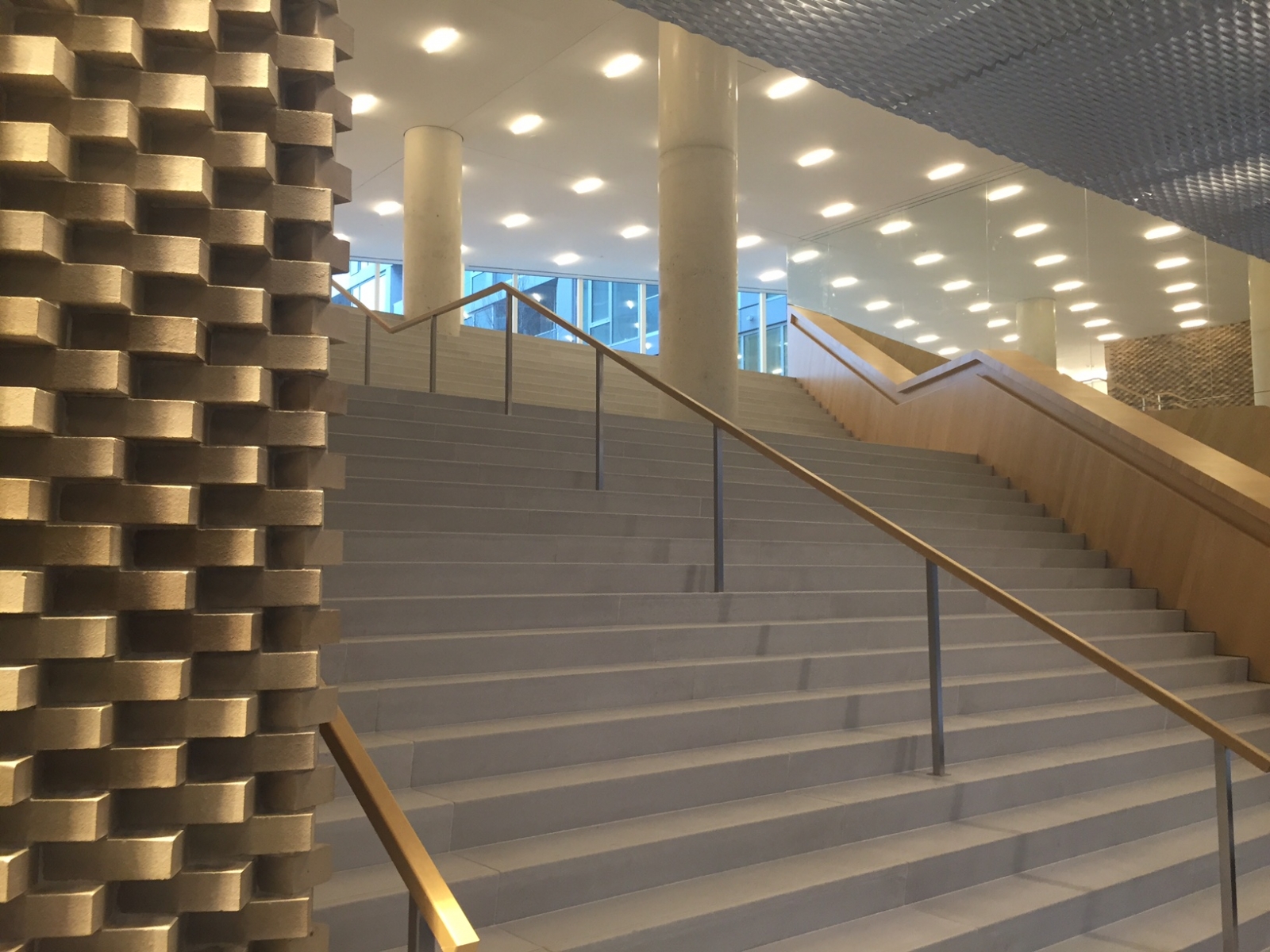 The sawtooth arrangement of the lobby walls is one of the space’s most intriguing features. 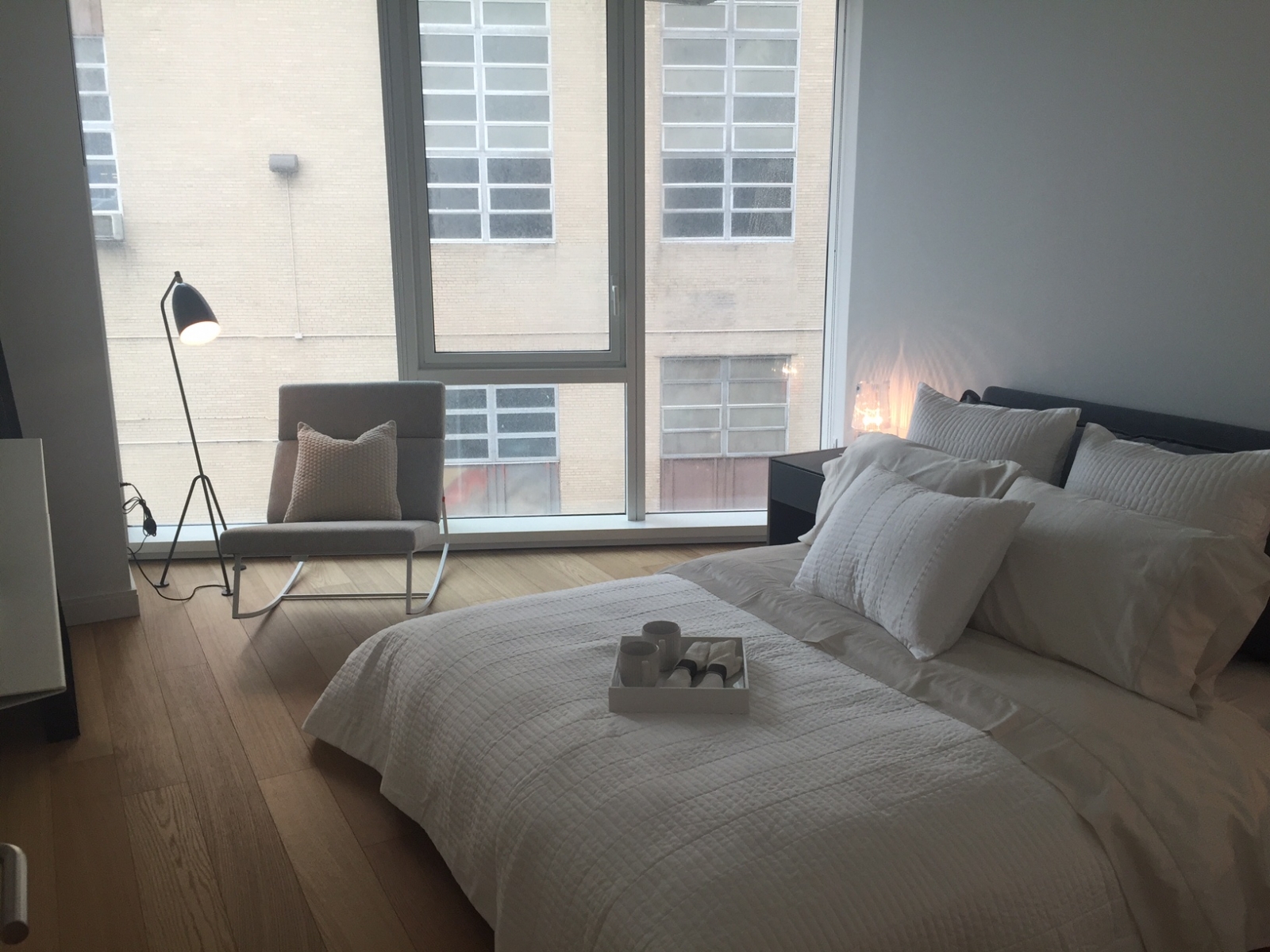 The master bedroom in one of the two-bedroom model apartment units. All of the units, including the building’s 142 affordable apartments, are detailed to a condo-level finish. 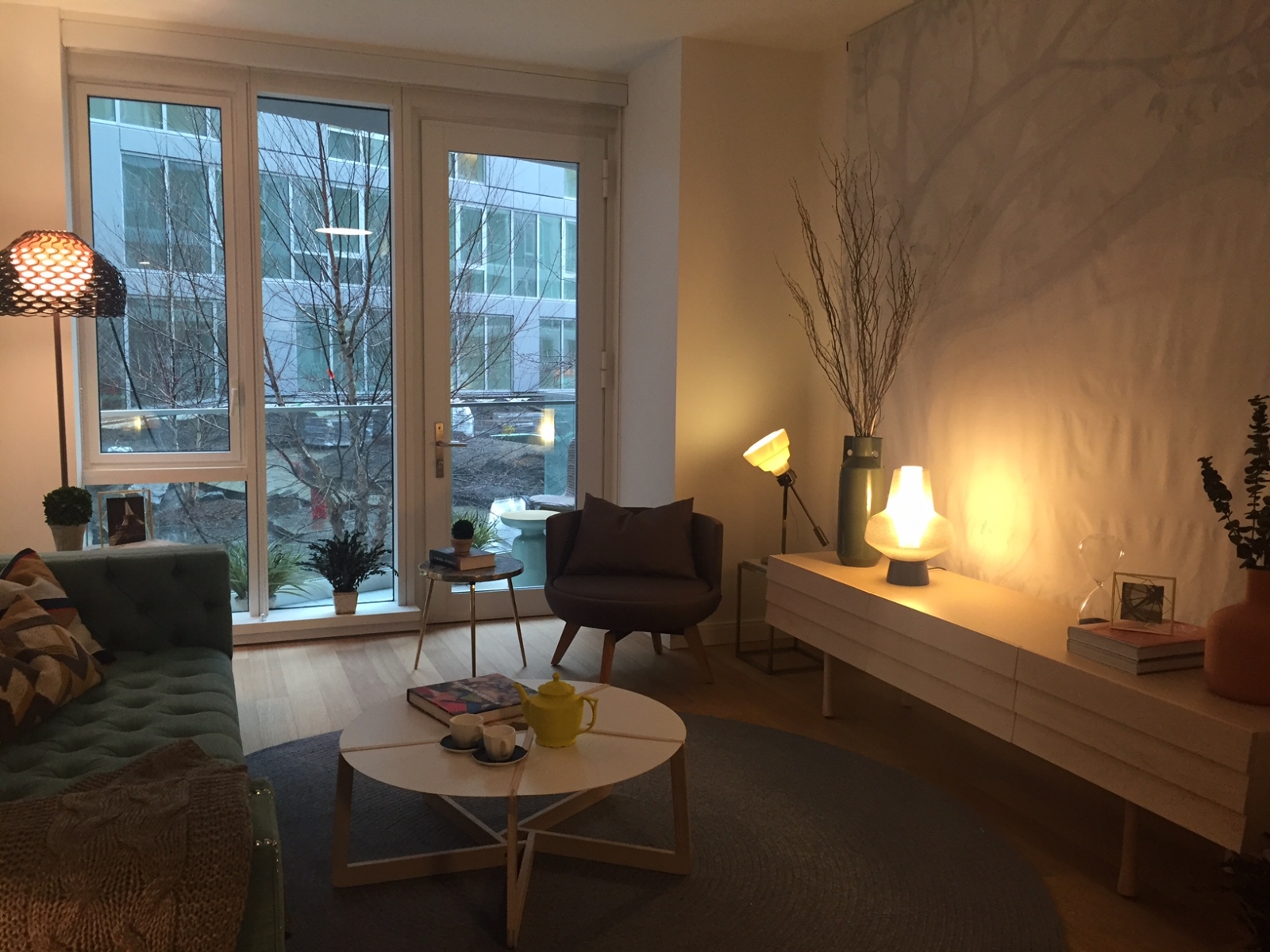 A living room in a 754-square-foot, one-bedroom apartment that faces the interior courtyard 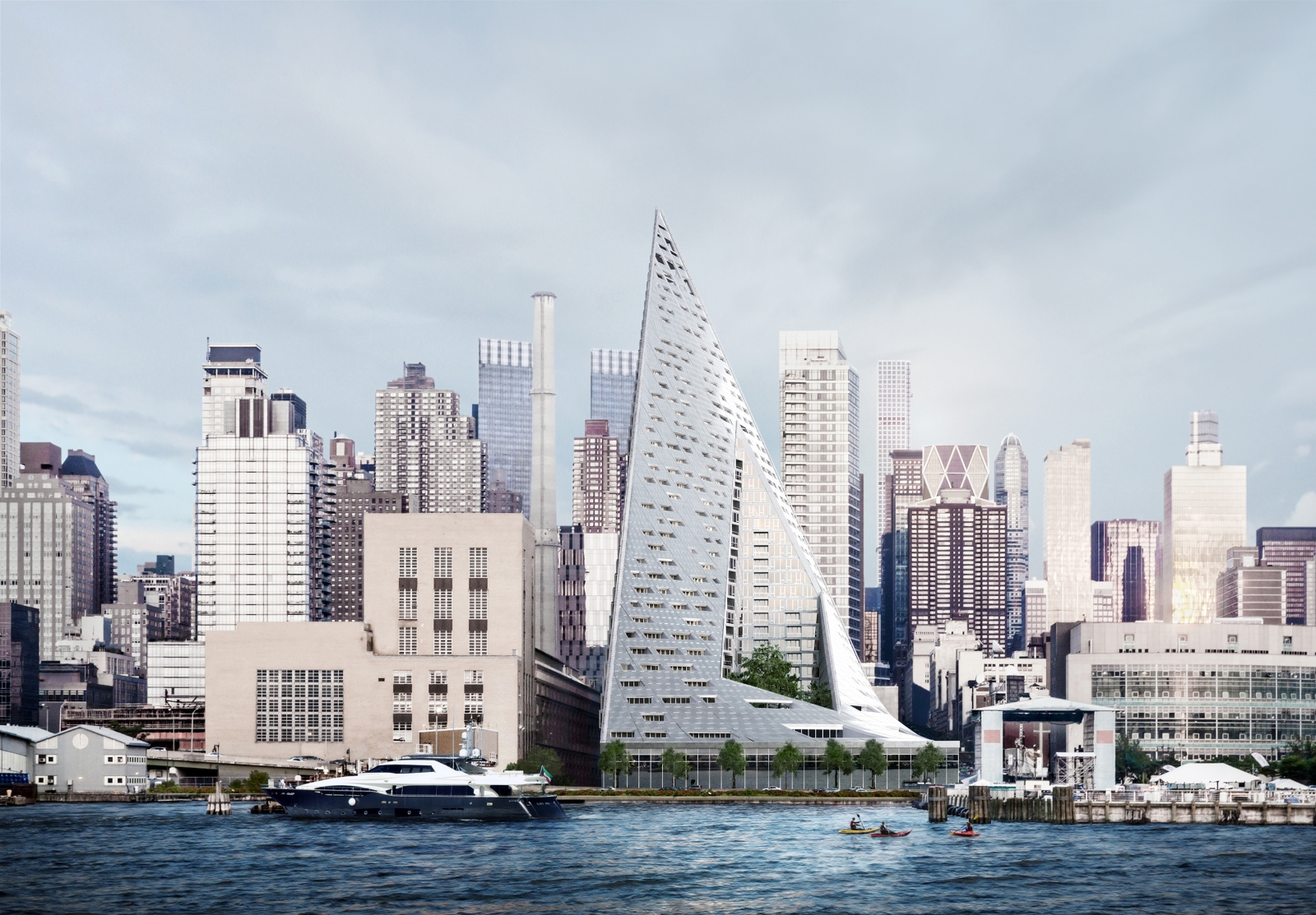 A rendering of VIA 57West as seen from the Hudson River 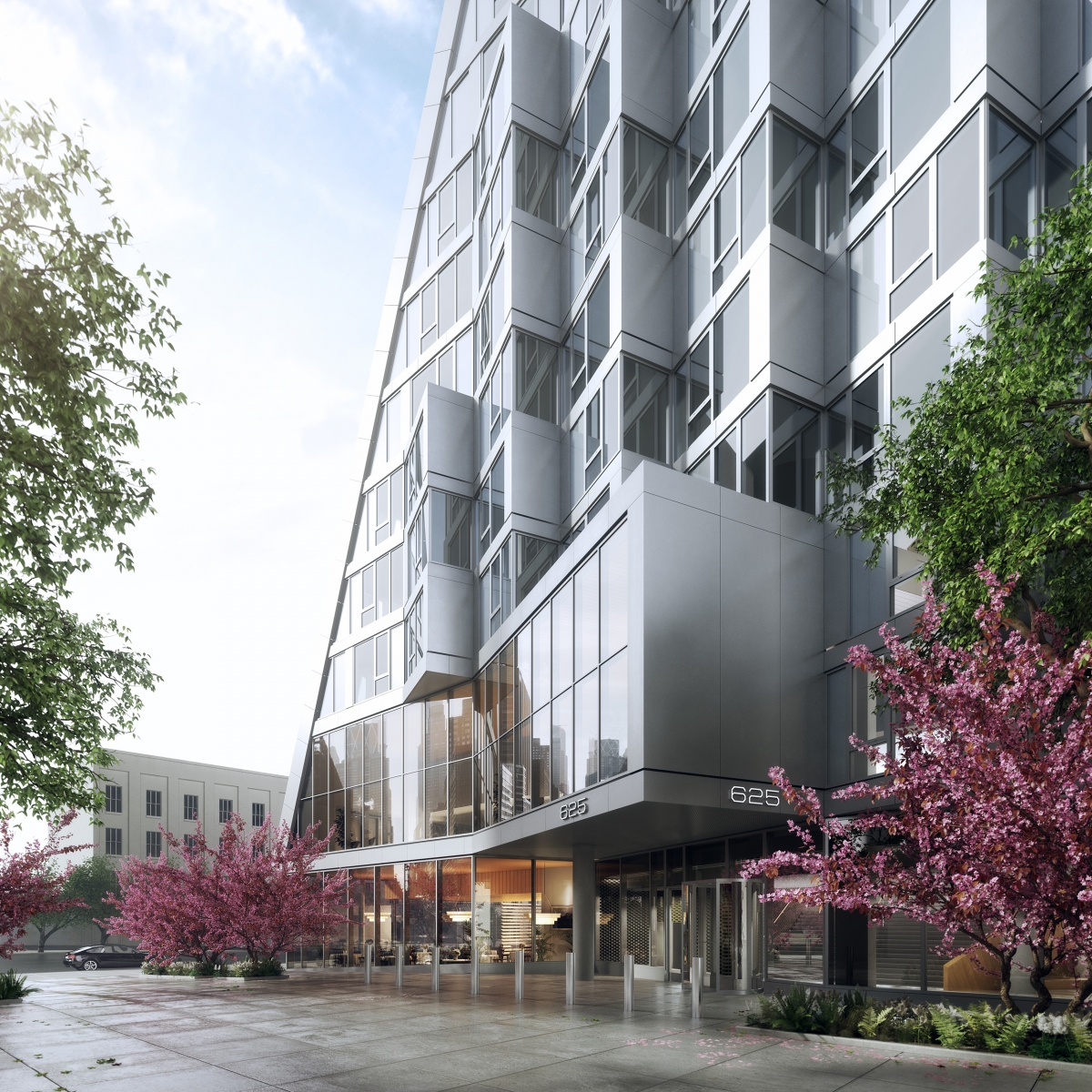 The exterior entrance of the building