Are architects ready to be part of a shared adventure?

This article, by Frank X. Arvan, originally appeared on ArchDaily as “It’s Time to Envision A Better Built Detroit. Are Architects Ready?”

There is an intimate connection between people, power, poverty, and place and there is no better city in the world to see this than Detroit. With the impending bankruptcy we cannot lose sight of the human issues that face our city.

For decades money and power have moved away from Detroit’s center. The complex reasons for this are well known so there is no need to rehash them here. Even in the face of city government’s failure to manage its assets properly, this is changing. There is slow and halting movement back to the center. This a good thing, for many reasons. It will help bolster the tax base and that is the basic financial problem the city faces. But more importantly it will create a stronger spatial connection between power and poverty that we haven’t had in this region for a century.

Power will see poverty and poverty power. They will feel each other’s existence. They will see the humanity of each side and be nudged to recognize the shared responsibility of caring for this shared place. This is how successful vital, dense urban cities operate. There is an acceptance of diversity on all levels. Barriers are reduced and human interaction encouraged. This is how creativity is bred. Exposure to diverse people, places and ideas excite and promote the imagination and a sense of the common good that includes everyone.

Of course, there are no illusions here. The rich and powerful are not likely to hang out on the street corner. That would push human nature beyond its current state. But, like New York City and other dense urban places, there will at least be a shared common place that people, whether powerful or impoverished, can work to improve.

For so long developers and their architects have planned and designed segregated communities outside and inside of Detroit’s limits. They have built gated housing communities, distant suburban single family housing developments; they have built office and industrial parks with warehouse-like work spaces detached from any other amenity; they have built shopping malls surrounded by a sea of parking separate from the homes of the shoppers that drive there. 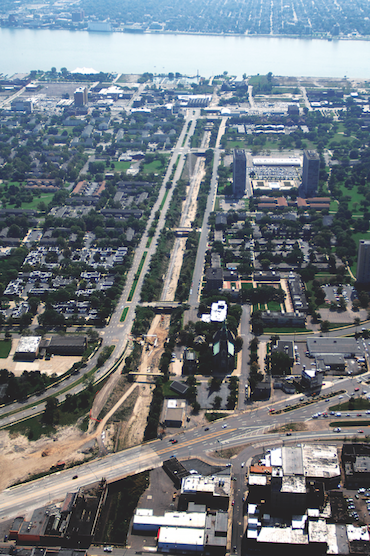 The innate fear of the other, the desire to protect and separate ourselves from difference, the mere convenience and simplicity of developing on unspoiled land, has created a development model where one class, whether poor, rich or middle, have been isolated in one place, separate from the other. It was a profitable model for some but detrimental to our overall culture and economy.

In much of this country and in Detroit specifically, we have lacked the option of a vital dense and diverse urban life. Many of us see and hope for a safe city that we can walk and live in with diverse people and places to enjoy. We long for the benefits of living in a socially and economically diverse place. This desire is now being recognized.

Developers are seeing the demand for urban living in Detroit, but the change is slow. Hopefully bankruptcy does not dampen this progress. Kurt Metzger of Data Driven Detroit points out that the “Greater downtown housing stock is full. Employment (downtown) is increasing but the population will need to await new housing. The trend has begun and the momentum is definitely there. Rental rates will need to rise a little more to convince banks and developers, and appraisers, that the market is ready.” I think there is no doubt. The market is ready. We are ready.

Architects are working with developers and the community to help bring this about. The first job of an architect is to envision a better-built world. Beyond the details of construction or any specific building style or type we work with our clients and the community to bring about a shared vision of how we want to live. Then we provide the technical and artistic skill to make that vision a reality.

The signs are there to make this happen. Recently architects and other designers contributed almost 200 entries to the Hudson’s Site competition sponsored by Opportunity Detroit; over 200 (also not all architects) entries in the Hart Plaza International design competition sponsored by AIA Detroit; AIA and other architects like Dan Kincaid and Dan Pitera of U of D Mercy are participating in and leading the Detroit Works Project; AIA Detroit’s urban priorities committee organized young architects and others building pop-up retail for the “Jazzin on Jefferson” event in June; and, of course, architects are working with private clients on large and small projects that will ultimately fill in and make Detroit a wonderful urban place.

The great bones of this city, the soul and creativity of its citizens, whether living in Detroit proper or the surrounding communities make it possible to rebuild this place in an authentic way. From the beauty of the Detroit River to the Woodward city plan established in 1805, with its quirky hybrid spoke street grid combination, to the wonderful iconic historical buildings that fill our skyline, we have the makings of a great place here.

For citizens, community leaders, and architects alike there is a critical ingredient that we cannot forget. This is a shared adventure. It’s not a private enterprise. Whether poor or powerful we are the people, together, recreating this place and we can only be successful if everyone is included in its vision and encouraged to participate in its construction.