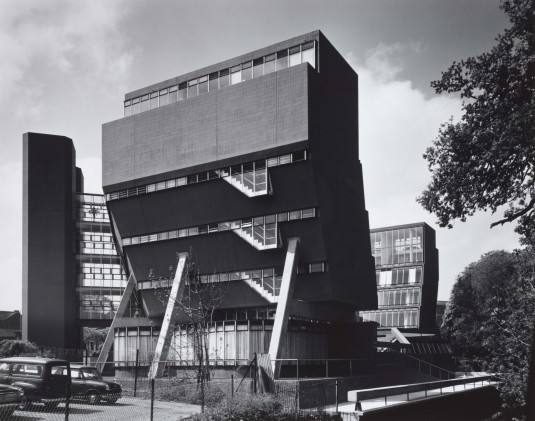 “Was James Stirling Modernism’s last great prophet, or Postmodernism’s original poster child?” If this question keeps you up at night you might not rest any more easily after you’ve finished the book that it launches, Amanda Reeser Lawrence’s James Stirling: Revisionary Modernist. But the fault would rest more with the intriguing excess of ideas that the author presents, rather than the absence of any comparably pithy, one-line answer.

Contemporary architectural taxonomy, when you narrow it down to subjects worth a book-length study, is difficult about as often as it is simple. No boundary is more suspect than one between Modernism and Postmodernism, where laws become undermined by endless inbred impulses, whether conscious or not. These classification debates can lead to oversimplified questions of whether a building’s appearance suggests doctrinaire rigidity or ironic quotation; that glib test of whether it looks like the Villa Savoye on the one hand or a clock, a buffalo, a tureen, a Cistercian gristmill on the other. In the absence of other evidence, sometimes purely structural analyses are a fair foundation for these judgments.

Happily, Lawrence is engaged in quite a different, and far more rigorous pursuit. She’s concerned with a close analysis of Stirling’s own thinking about his projects and his idiosyncratic conception of Modernism, as “a set of principles that transcended association with the contemporary or even with the twentieth century; they had nothing to do with any stylistic language, modern or remote. As Stirling was fond of saying, ‘There’s nothing fundamentally new about modern architecture,’ by which he meant that modern qualities could be found in buildings throughout all of history.” This may not be a useful way of thinking about either Modernism or Postmodernism in the larger world, but it certainly is an interesting way to think about James Stirling.

Lawrence advances the Harold Bloom–influenced thesis that Stirling’s invocation of the past bore a unique stamp, forsaking reference for its own sake in favor of a vital present-ness. To “revision” something, as Bloom notes, is to literally see it again. This is a distinct idea from referencing, a more neutral act in which the element brought forward from the past is acknowledged as complete and left more or less intact. The Latin root of “reference” defines an origin point—in other words, a fixed and knowable beginning. Copying similarly implies that the original element is unmodified; the later version simply a repetition of the earlier incarnation.

Re-visioning, on the other hand, acts more violently and more decisively on the precedent, violating its initial terms. The act of revision necessitates some kind of change—a “correction,” to use Bloom’s term. Lawrence takes as her focus only six of her subject’s significant works, those “focused on Stirling’s investigation of historical sources and their investigation to Modernism,” a tour which affords a fascinating frame for her thesis but, just as valuably, the opportunity for a rigorous examination of several of Stirling’s greatest works. An intriguing starting point: a list of Stirling’s declared favorite works while in architecture school featured Corbusier’s Towards a New Architecture and Ouevre Complete but also A.E. Richardson’s Monumental Classic Architecture in Britain and Ireland, and Fritz Saxl and Rudolf Wittkower’s British Art and the Mediterranean, a volume I’ve never heard of, but which traces the seemingly very un-Stirlingesque “Mediterranean influence on English art, from prehistory to the nineteenth century.” 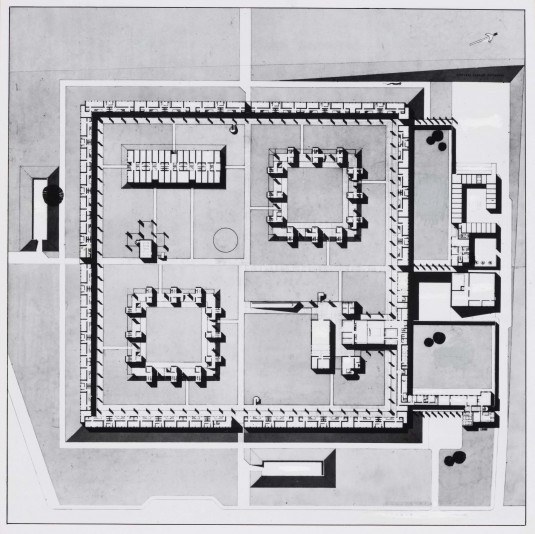 We start, unsurprisingly, with Le Corbusier. Stirling’s Flat at Ham Common (a collaboration with James Gowan) was an acknowledged response to Corb’s Maisons Jaoul, which Stirling repeatedly disparaged for its perceived turn from that architect’s earlier “rationalism.” And why revise a master’s undistinguished work? Partly, Lawrence speculates, to distinguish the project from prewar Modernism and, more importantly, to “rationalize” Le Corbusier’s precedent. Stirling and Gowan modeled a close accord between structural circumstance and visibility, bathrooms and bedrooms cluster along the structural cross walls, living rooms along the facades freed from load-bearing constraints. They jettisoned French vernacular features, such as the earth roof and the Catalan vault at Jaoul, while turning to English cheap and “messy” Londonstock brick. Later Stirling paired a photo of a window at Ham Common with one of a Liverpool dock, to emphasize a natural English connection; at the same time he was tidying the perceived irrationality of Jaoul houses. He referred to bricks as a “9-inch-by-4 ½ inch pre-cast-system” and used them precisely here, distinctly differentiating brick sections of the facade from concrete, another retort to the perceived subjective sloppiness of Corbusier’s treatment of these two materials.

Stirling’s and Gowan’s game becomes subtler in the next example, the design for Churchill College at Cambridge. Here they embrace the traditional courtyard model, on a vast scale. “More broadly, symmetry at Churchill was put in the service of a very different ideological goal than it had been for the Neo-Palladians,” writes the author:

“Rather than operating as any kind of idealizing or historicizing impulse, it instead became a means to distill the core attributes of the courtyard type into a pure form, to reduce the courtyard model to its essence. For example, the idiosyncratic outer walls of a typical Cambridge college that must respond to existing structures or sight constraints are here, in the absence of any context, made rectilinear; the ‘quadrangle,’ more often than not a five- or six-sided shape, with randomly angled sides of uneven lengths, its taken to its logical endpoint of a perfect square; the usually erratic paths across the courtyard are now straightened and evenly spaced. Symmetry, then, as employed at Churchill College, abstracts and ‘corrects’ the typical features of the Cambridge College…”

The plan, Lawrence suggests, offers a sort of typological referencing that’s free of an overt reference, a project that “dehistoricizes precedent.” And intriguingly, another nod to Stirling’s understanding of regionalism; he praised Corbusier for a form that wasn’t principally about materials, but rather what nearby buildings were like. While Stirling made an intriguing choice of masonry instead of brick (a nod to the stone traditions of Cambridge construction as opposed to new “red brick” universities), in this project he proposed a courtyard that nodded to the traditions of Cambridge colleges while standing apart from them in almost every way. 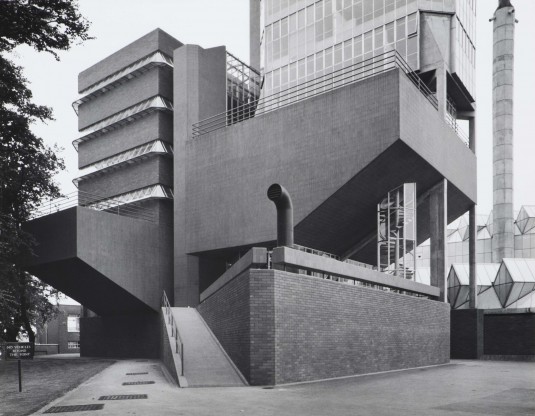 The Leicester University Engineering Building is seen not merely as Stirling’s most notable building but as the source or a riot of speculations about historical referencing. The building nods to Melnikov’s Rusakov Workers Club in Moscow. But good luck disaggregating inspiration, influence, and interrogation.

One quest was clear: Stirling’s distaste for the “constricting box” of postwar Modernism, in which diverse functions were jumbled into huge structures. Here, within a crazy quilt, he offered a clear accord between function and volume, “the various program elements (the lecture theater, the administration tower, the laboratory tower, the workshop shed) are also the primary volumetric components. In other words, there is a one-to-one correspondence between program and form.” And yet nothing is quite so simple. Lawrence cites Peter Eisenman’s examination of the nature of the building’s cladding; prismatic glass walls in the laboratory tower make adjoining brick appear thin; the brick laboratory building is elevated, with brick revealed as ornamental.

Back to another experiment with the courtyard model in the Florey Building at Oxford. Stirling, again, made nods to the Oxbridge past, noting, “It was intended that you could recognize the historic elements of courtyard, entrance gate towers, cloisters, also a central object replacing the traditional fountain or statues of the college founder. In this way we hoped that students and public would not be dis-associated from their cultural past.” He was determined to play with this mode as much as possible; the courtyard becomes a semi-octogonal structure open to the river and views of Cambridge towers, the entrance gate becomes ornamental, concealing rather than containing the entrance, the cloisters become an almost-isolated passageway through the structure, oriented primarily towards circulation to the river, and the “central object”? An exhaust vent, decorated with a weathercock. 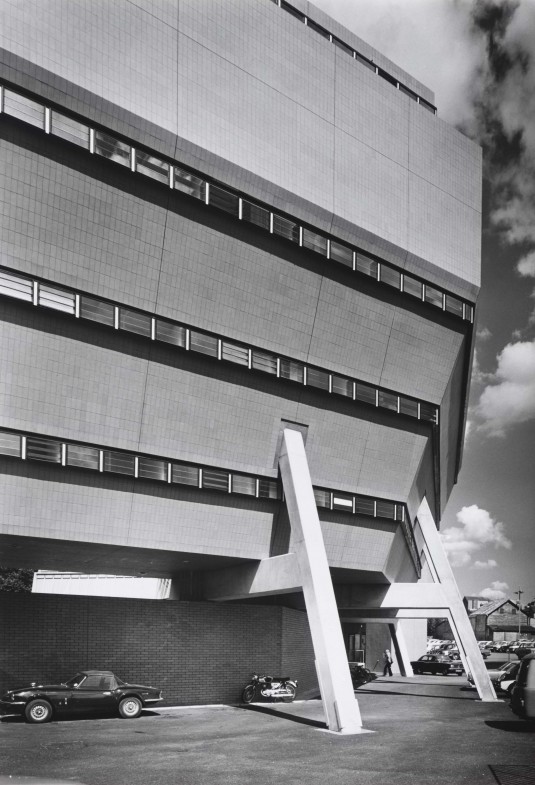 Atop this traditional model of the courtyard, however, is overlaid the new form of the amphitheater. The building steps back and looks down upon a raised stage-like portion of the courtyard. A typical Stirling-like dedication to rational use gave over all internal courtyard space to student rooms, clad in patent glazing; other functions clustered along the outer wall, faced in red tile.

Here Leicester’s play with brick comes to an end. Brick fulfills only clearly load-bearing use near the base; tile or glass face all other surfaces. This rigorous differentiation of materials in carrying out a design that’s engaged in a variety of typological references whilst sublimating any particular reference offers another argument for Lawrence’s Stirling-as-Modernist thesis.

Do you have to buy this account? No. For a rigorous accounting of a considerable body of material about Stirling’s work, though (and we’ve not even reached the chapters on the North Rhine-Westphalia Museum or his Roma Interrotta exhibit) you needn’t, in order to still benefit from an admirably close analysis of both Stirling’s work and decades of its critical reception. Read and re-vision.