Eddie Sykes makes a dynamic folding landscape out of grass and aluminum.

Eddy Sykes is a kinetic sculptor and principal of ChersonProm. His new piece Yakuza Lou is the first of its kind auto-articulated tessellation system to incorporate a garden within its geometry. Materials include aluminum, grass, and 22 computer controlled motors. The piece is on view at Materials & Applications in Los Angeles until March 2009. Sykes answered questions explaining kinetic dynamism and the importance of mowing the lawn. Click here to see geometry in motion. 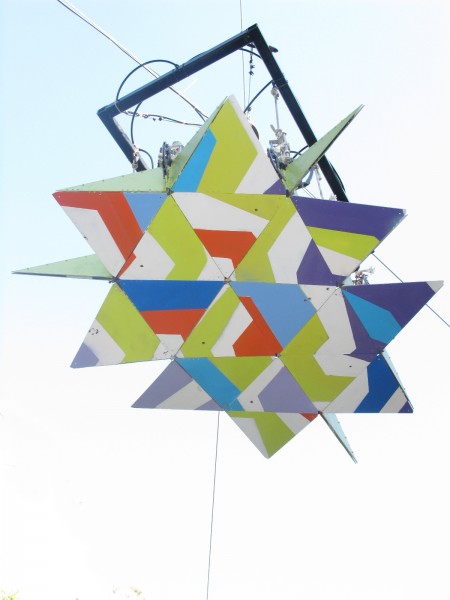 The robot cloud! How does it work?

The label “cloud” is really is a matter of context. If it is suspended and hovers over a landscape emitting vapor or fog, then it’s closer to a cloud then say a flying wheelbarrow. In essence it is the exact same component that occupies the ground below it, sans grass and with a better paint job. The pieces themselves are offshoots, or surface finish explorations, of an expandable mechanical surface matrix we have been developing for the next generation of kinetic dynamic architectural applications. They are based off a Ron Rush geometry developed in the late 1960’s.

This was our spring board for development, as paper models take one only so far in real world architectural conundrums. We developed a unique system of overlay hinges and gaping fixtures for solid dimensional folds and motor driven expansion. It sounds a little complicated but to over simplify, it is the articulation of a simple childhood paper fortune teller linked to an equilateral triangle grid. It can’t pick your favorite color or who you will eventually marry, however, we are working on that. 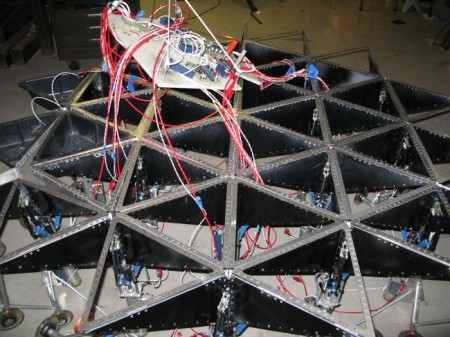 Is the fusion of the natural and the mechanical something that you’ve been interested in exploring? How has it shown up in your past work?

I would say it began, on this piece particularly, as a simple exploration into the tried and true hard versus soft train wreck. Simply put, the movement of flexible, soft material has to be repeatable as well as predictable.

Soft drives, as I call them, are in practice an air bladder or a rubber band or some other flexible means of locomotion. Until recently those materials were highly dubious and prone to fatigue. Finding ways to generate movement with the end use material being plastic requires an understanding of some of the most basic rigid engineering ethos, “ink on linen” stuff, otherwise how would one even think of making architecture out of a bunch of goo? There are examples of such soft materials being implemented into workable structures currently of course, but I assure you ARUP has forgotten more about H beams and moment frames then most architects or designers will ever know.

The terms or comparisons are so different now compared to a few decades ago. I think natural versus mechanical or hard versus soft etc. Now, the polar opposites people want to watch it duke out encompasses inputs such as sound, A.I. response, reaction, static, open source, any of those plus countless others. 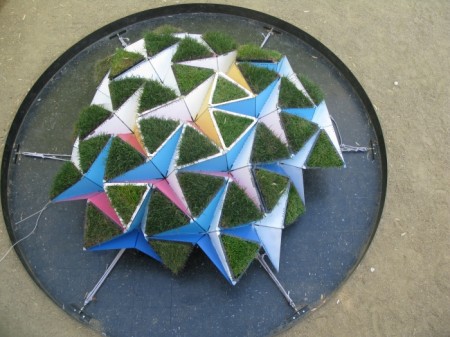 Working with M&A seems like a very interactive experience-you build the installation with volunteers, and you get to watch people engage with it over the weeks. Is this different than the way you’ve worked in the past? (You probably don’t get armies of volunteers showing up in hard hats on construction sites!) Do you think this will influence your future work?

Its really amazing to watch this organization grow and become a force that has and can make a difference, to link not only ideology with participants — willing or otherwise —but to validate methods and most importantly practices, both professional and that practices’ process. There is no other venue like it here in Los Angeles and I can’t see something like this taking up prime real estate in New York, so it truly is the only game in town for this type of work.

The people there all have a grasp of the end result, and take the time to understand each and every aspect of a particular installation. We could not have pulled this off without the swarm of volunteers and interns putting in the hours needed. The directors of the organization are truly pioneers in this field, I wouldn’t want their job, it looks like murder, but they manage to pull off some very ambitious maneuvers and stick the landing.

What is actually growing in the garden? (specific names of grasses and plants, please!)

I’m originally from Detroit and everyone loved Kentucky Blue Grass there-not the music which is always Motown or the White Stripes-but that lawn of well manicured KBG! It’s quite an indicator of status in the Midwest. A man’s lawn is his static shoes, as they say. My father made me mow miles of it, once every 5 days, never mulched, always bagged. Its a love hate thing with that grass.

As far as what we have and what we are able to place in the machine, it is a completely open option. We were thinking of putting in triangular buckets of fried chicken next month and then hanging chads the next. Added “Question What” is the future plan for this project. The office is really excited about the next project which will be to turn these suspension tessellations into lighting systems. We have a few prototypes now and they are really something. Timing the source light with the expansion adds an entirely new variable to lighting. Its like one of those sci-fi eggs that crack and a blaze of a million suns. We have a lot of irons in the fire.

Where did the name come from? Is this installation a Japanese gangster?

Lou is my beautiful little daughter, and I would hate to loose a finger by not acknowledging her as my inspiration.