It’s been decades since Virtual Reality was first introduced to the public, in dismal films and television shows, so its no wonder that its presence in our imagination has faded. But universities around the U.S. have been developing VR tools for many practical applications. At Brown’s Center for Computation and Visualization (CCV), such projects include […]

It’s been decades since Virtual Reality was first introduced to the public, in dismal films and television shows, so its no wonder that its presence in our imagination has faded. But universities around the U.S. have been developing VR tools for many practical applications. At Brown’s Center for Computation and Visualization (CCV), such projects include space exploration, psychological treatments, and scientific data analysis.

Now that NASA’s shuttle missions are officially over, the opportunities for on-the-ground planetary explorations have been severely curtailed. The ADVISER system (Advanced Visualization in Solar System Exploration and Research) developed at Brown provides a tech-generated alternative. This system can incorporate datasets that are tens of terabytes in size into a single, comprehensive environment. That environment can be interacted with on a single computer, on wall-size projections, or in completely immersive environments generated in their CAVE. This system is so well developed that it has been integrated into the university’s coursework. What’s more, it can aid in the exploration of remote regions not just in space, but here on earth in locations like Antarctica.

From the exploration of distant planets we go to exploring the most intimate depths of the human mind. VR in the military has often been confined to training in skills like flying to identifying “enemy combatants.” But the CCV has a new application that combines psychological treatment with VR for veterans after they return from their tours of duty. Here, VR is used to help assess their level of PTSD by subjecting them to different VR scenarios and then assessing their responses. Combined with traditional talk therapy, in which the veterans self-identify situations and associations, this tech approach can provide an important tool for finding the most effective treatments for treating and alleviating PTSD. Beyond the obvious suggestion of facilitating group therapy amongst patients located in different places, veterans can be gradually exposed to potentially therapeutic environments as well as acclimating them to their current circumstances and gradually ease the shock of re-entering civilian society. 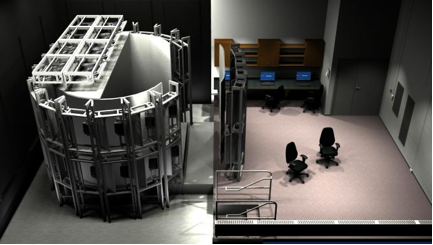 In addition, there is a device that creates an entire VR environment, designed to analyze large scientific datasets of different types and consolidate them; and it can integrate that data with 3D data as well. This allows scientists from different disciplines to approach their data more comprehensively. The possibilities are truly wide-ranging, from geologists attempting to understand plate tectonics to physicists investigating particle collisions. Eventually this device will be used for teaching courses that range from art history and geography to physics and history–any area of learning that benefits from an immersive environment to engage and enlighten students.