An outdoorsy homestead designed by Lake Flato embraces the views of cypress-shaded creeks. 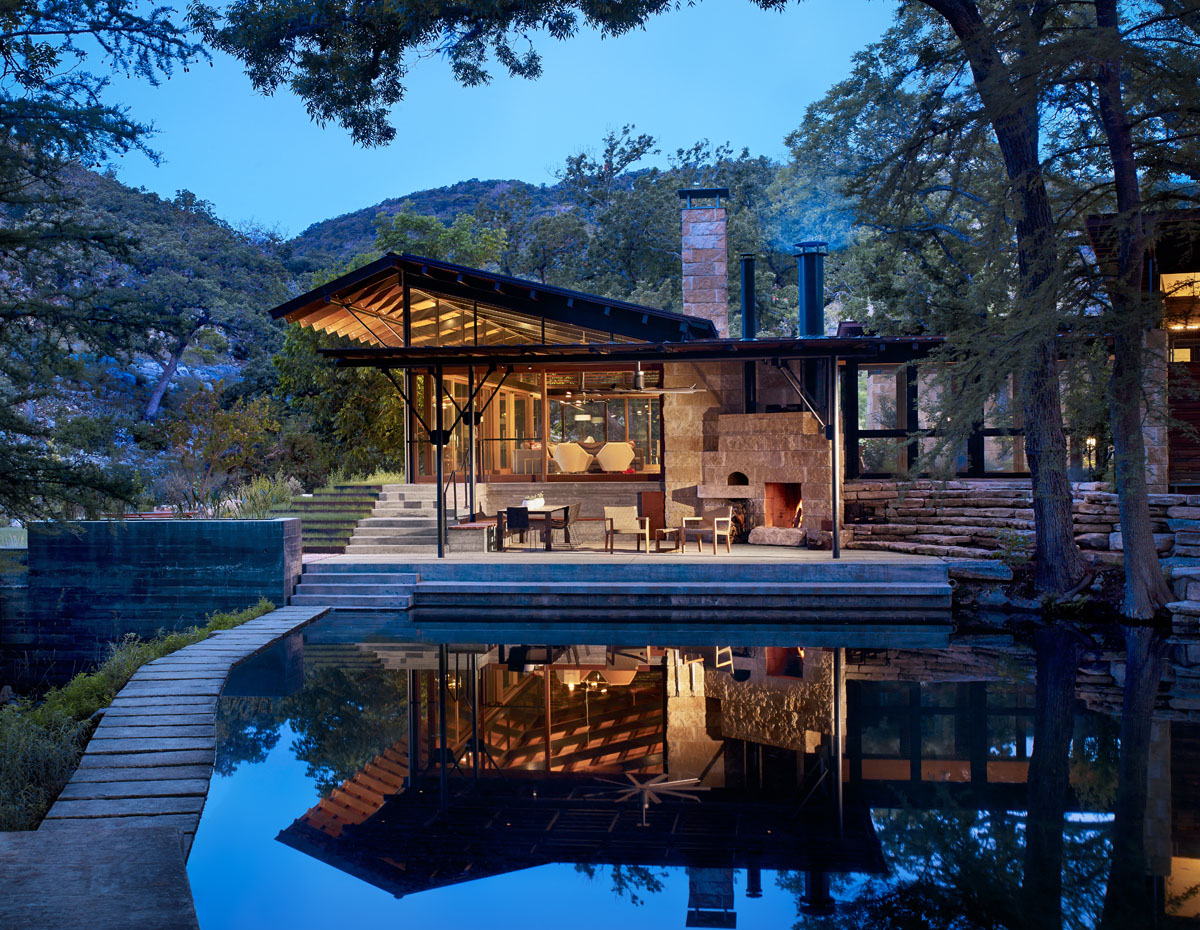 With outdoor fireplaces and moving walls, the Mill Springs Ranch is dovetailed into its setting. The path across the water is the top of the dam that holds the upper portion of the creek.

When they want to get out of Houston, John and Amy Miller head west, past San Antonio, into a dusty part of the Hill Country known more as a destination for motorcycle riding than modern design.

Down a curvy dirt road and over low-water crossings deep enough to keep most city dwellers out, the couple—in partnership with Lake Flato Architects—has created a retreat nestled in the Y of two creeks that some past landowners were smart enough to dam.

After the Millers approached Lake Flato in 2008 and took project manager Steve Raike to see the property, Raike couldn’t stop thinking about those enchanting pools of cypressshaded blue-green water. “What makes the Hill Country so special are these little oases,” says Raike, who worked with his colleagues Laura Kaupp and Chris Krajcer on the project. “You come out here to hear the water, be next to the water.”

But building next to water in droughtstricken Texas can be problematic because of unstable foundations and flooding. Using John Miller’s knowledge of geophysics and the neighboring ranchers’ recollections of gully washers during the past 50 years, the architects found that the creek-side land was solid enough to support new construction.

Raike then got to work, designing a home that would allow the Millers to do what they love: entertain, play, and relax outside. “When you live in the city, you want a house that is efficient and compact and does all the things you need in a city,” Raike says. “In the country, we like to pull buildings apart so you can let the land come between them.” 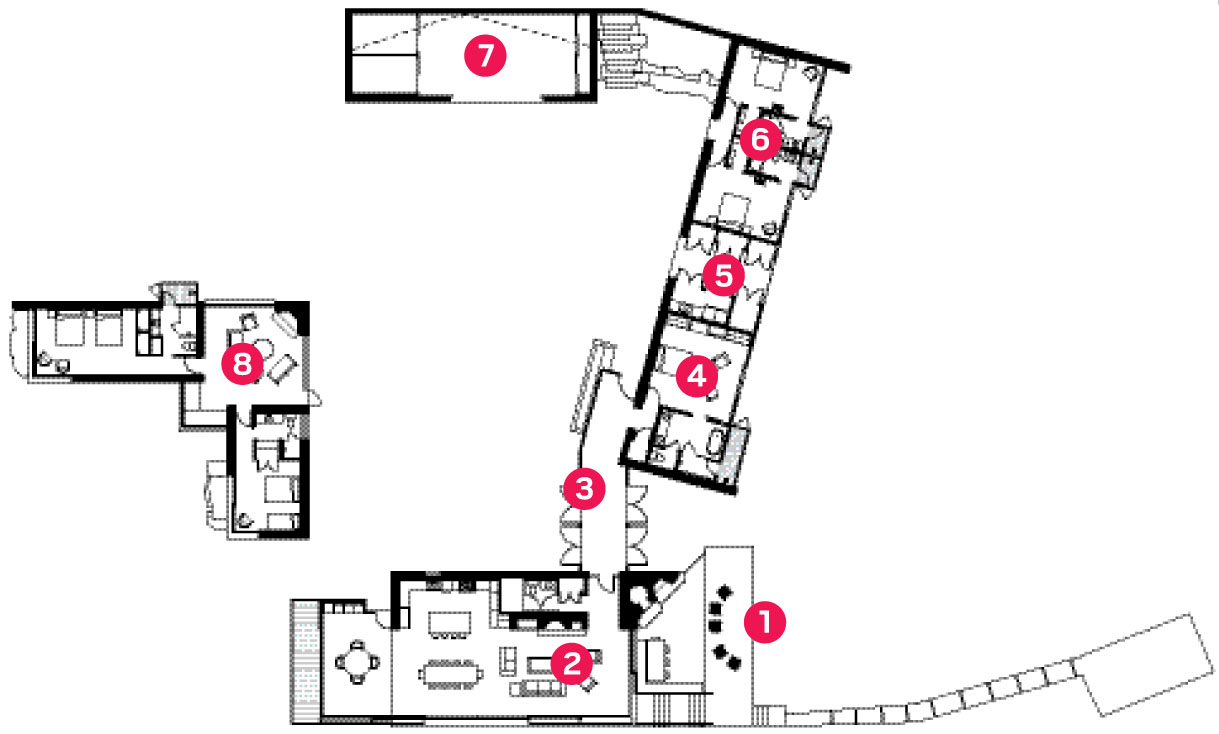 The master and side bedrooms are connected to the main living and dining space by a covered, dogtrot-style breezeway. The guest living quarters stand on the other side of the courtyard designed by the landscape architect Christy Ten Eyck. The manicured channels of water and semi-contained, domesticated foliage flirt with the wild Hill Country on the other side of the structures.

The undersize bedrooms nudge their keepers outdoors. “The whole idea of coming here was to be together as a family and enjoy the land,” Raike says. “When you’re here, you don’t want to be indoors. You want to be out in the land: fishing, hiking, and biking.” 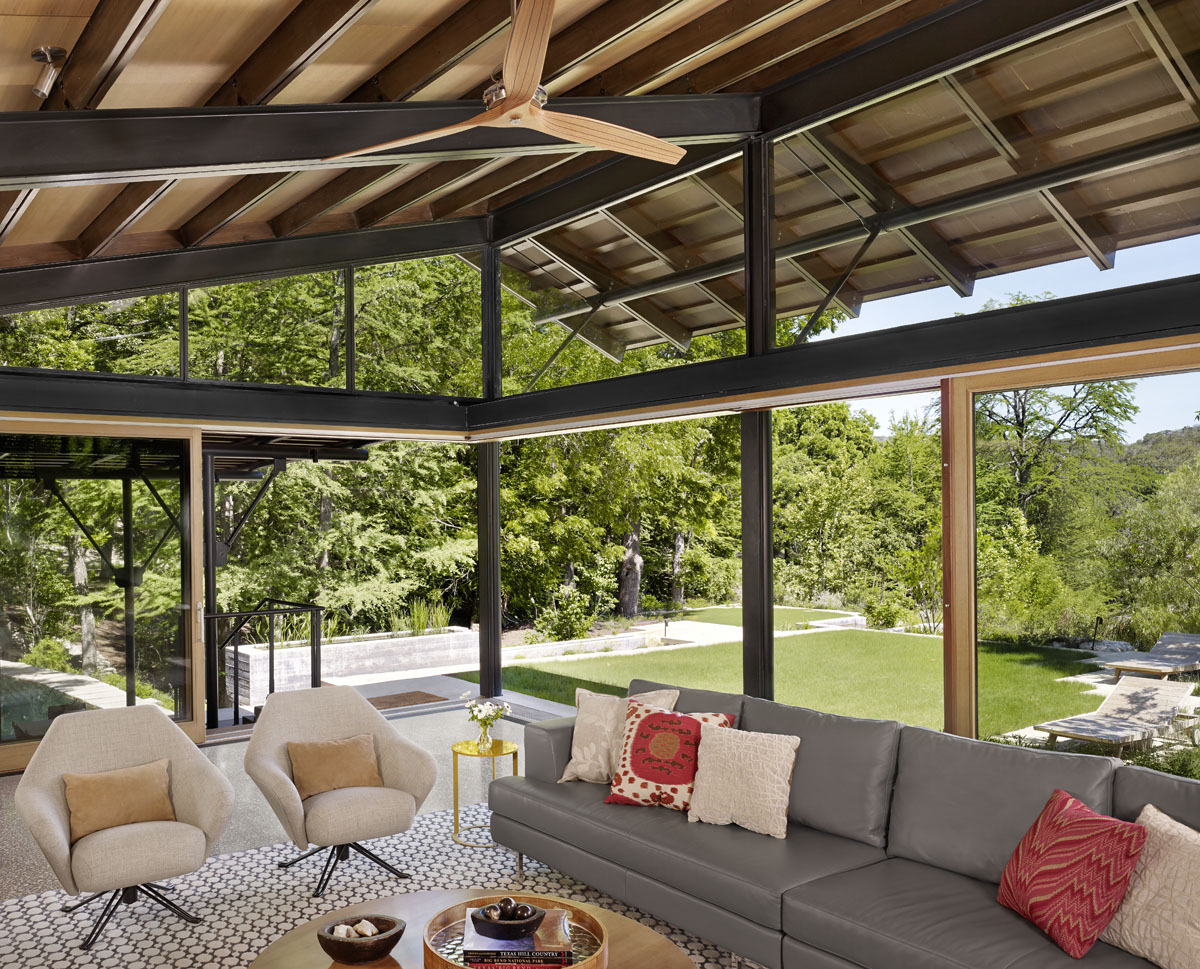 The main living area of the home can open fully to the outdoors, thanks to the lift-and-slide Dover doors. An Aero fan from Boffi helps circulate the breeze.

Roughly hewn limestone anchors each room like a cove to a bluff, creating the backbone of the house. This orients both the structures and their inhabitants outward, so that all the surrounding valley has to offer can come in—including the breeze off the creeks.

Raike’s handpicked aggregate, placed and finished by Duecker Construction Company, speckles the cooling concrete inside the house, but he wanted to use as little as possible as the house extended toward the water. With Ten Eyck, the Lake Flato team designed steel-sided, grass-covered steps that spill out of the main living space and into the peninsula between the two creeks. 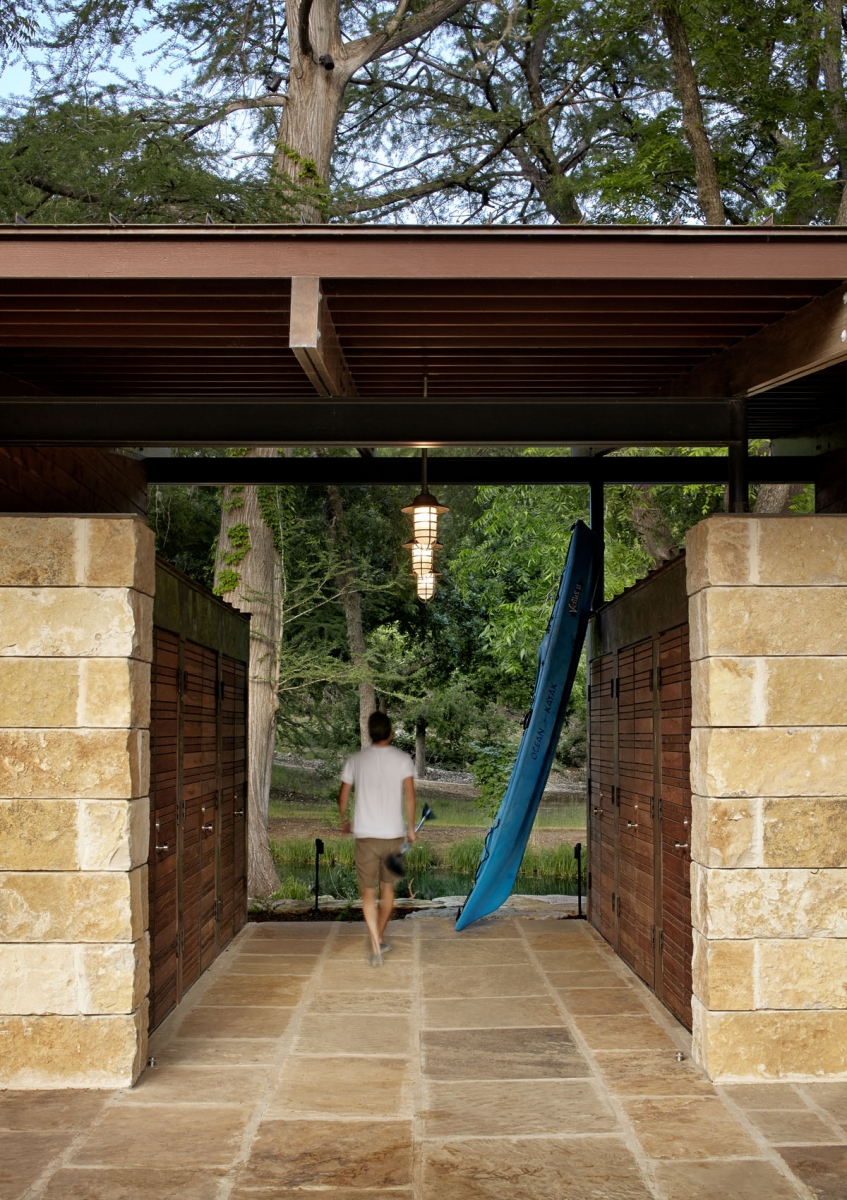 A kayak rests in the dog run, which is faced with Roughback Leuders limestone.

Further blending the line between structure and landscape are tiered fire pits, lounge seating areas, and, finally, as many points of access to the watering holes as they could squeeze in.

Amy Miller, who was hesitant at first about putting so much space between the buildings, says that’s now her favorite part of the design. “I love the feeling of not really being in a structure,” she says. With the moving windows and walls and soft transitions from inside to out, “you still feel like you’re in the middle of where you want to be.”