Brazilian architecture is devoted to Niemeyer. How does that effect the architecture of the country as a whole?

As an architecture student at the Federal University of Rio de Janeiro, I was a bit put off by the cult of Oscar Niemeyer in Brazil. While I knew how talented and what a visionary he was, I found it upsetting that every new project of any significance was automatically assigned to the “living legend”. There was at the time, and still is, a practice by politicians that goes like this: whenever a public project is in need of exposure or dealing with a controversial proposal, they would attach Niemeyer’s name to, in order to avoid debate and discord. Who could, after all, argue with a “genius” creation? Without a doubt, most often than not, the Niemeyer creations were, indeed, genius. But what about the abundance talented architects prevented from even proposing their own visions? 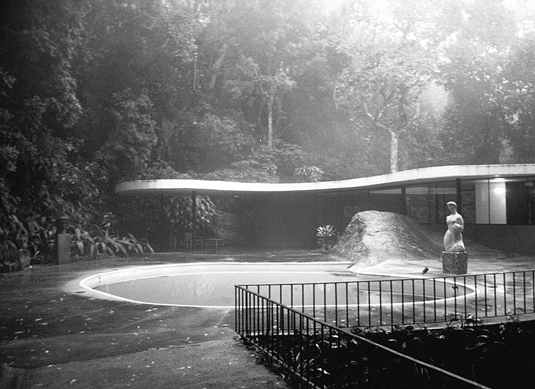 It took some time for me to separate the circumstances in which Niemeyer’s talents where applied from his designs, career, and humanity and thus fully appreciate what he was all about. Like my fellow student, now architect and entrepreneur Henrique Thoni, said to me when discussing Niemeyer’s legacy, “Many can question his design, his social, and political beliefs. But drawing a curve is a challenge that only a few dare to face. He chose this path. Moreover, he did it when the straight line was the rule.” 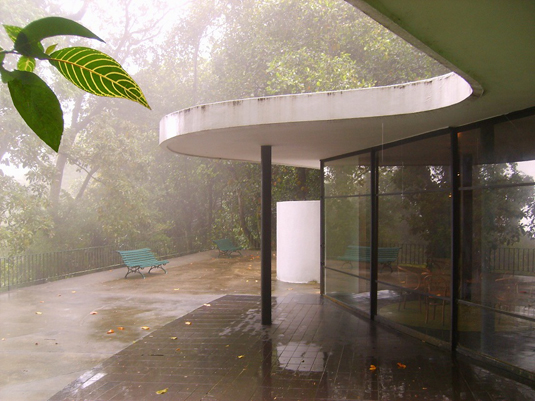 Indeed, the curve once started, never stopped seducing. Issues of scale, functionality or pragmatic concerns were never a match to the originality and poetry of Niemeyer’s designs. A man of strong political ideas, matched by actions to support them, his career is synonymous with the modern movement. Yet no other modernist made such a conscious commitment to focus on beauty as a fundamental element of architecture. 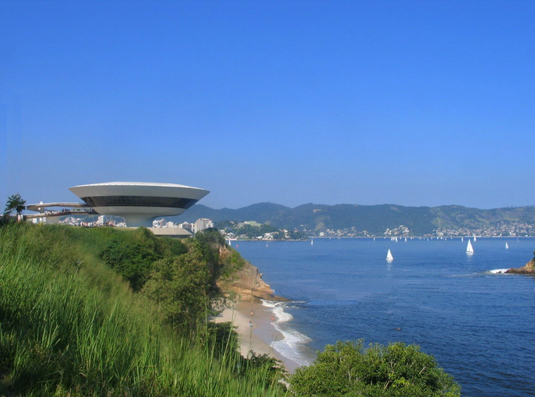 For a photographer always looking to capture the best expression of any particular building, I found Niemeyer’s architecture, with all its swooping concrete shapes, present a real challenge to document and express properly in two dimensions. Yet this is, precisely, what  makes architecture so exciting and rewarding for me. Never having made it to Brasilia, the Niemeyer projects that spoke to me were the ones where the scale was smaller, easier to relate to—those with an intimate and personal feel, rather than grandiose monumentality. 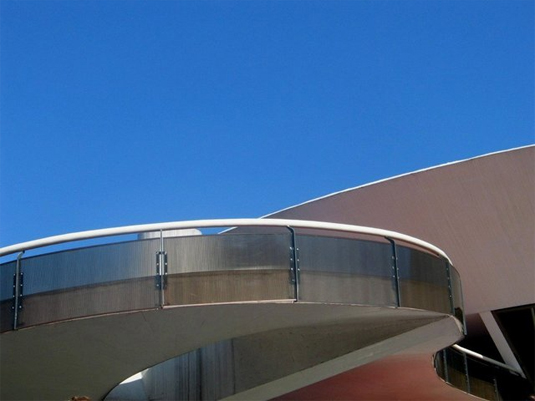 The first such project I visited was Casa das Canoas, a residence he designed for himself in 1951. It’s set in the rain forest hillside area of Rio de Janeiro. An ameba shaped concrete slab roof that’s supported by elegant thin columns and covering a floor plan anchored around an existing bolder that connects house to pool and surroundings. The design is a rewarding dialogue between man and nature, where each is given its own value. The free form slab serpentines so delicately that you are challenged to find other instances when concrete was put in juxtaposition of centuries old trees in such a graceful manner. 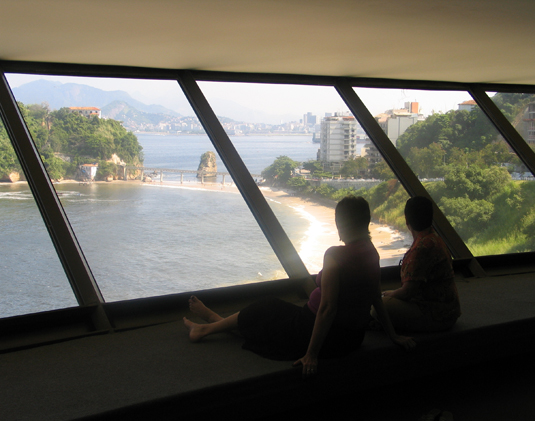 I’m endlessly intrigued by the Pampulha complex, which I often visit and photograph. It never disappoints.  Pampulha consists of several structures built around an artificial lake. I would call it the “Bilbao effect” precursor–a large project ordered by the ambitious mayor of Belo Horizonte to make a high profile statement. That mayor, Juscelino Kubitschek, later became Brazil’s president who  commissioned Niemeyer to give the new capital, Brasilia, its iconic design. But Pampulha is where Niemeyer first started to play with the curve, to push the boundaries of what could be done with concrete, and ultimately to free architecture from the ancient paradigms and vocabulary that ruled it, in a way that no other Modern architect had been able to repeat. Of course there have been radical modern statements made by then, but none with the grace and beauty that Niemeyer brought to the style. The buildings are light, full of surprise, open, integrating art and the context in a balanced way. Designed in the early 1940s, some 20 years before Brasilia, the scale here is inviting, it asks us to join in rather than adore. Even though a landmark project, it does not read like a “manifesto.”  It’s more like an example of what the new times could be. 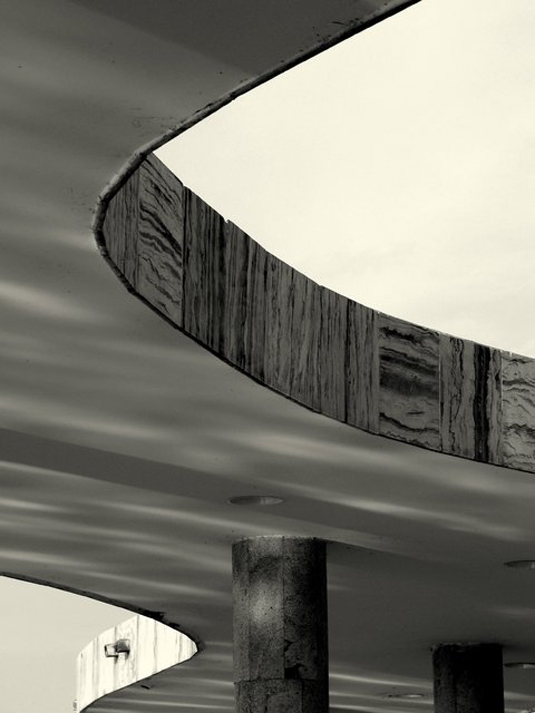 And then there is the Museu de Arte Contemporanea (Contemporary Art Museum) built in 1991 in my hometown of Niteroi, across the bay from Rio de Janeiro. It brought Niemeyer and the town a great deal of exposure. Many have called it a flying saucer sitting oddly on the hillside. Indeed the way it connects to the ground seems ill fitting and ill at ease with the land, unlike his other projects were. But in its prime location, with undisputedly beautiful vistas, a “flying saucer” seems to be exactly what one would like to be in, soaking in all that expansive space around it. The access ramps add to the drama and highlight the interaction between the user and the building. 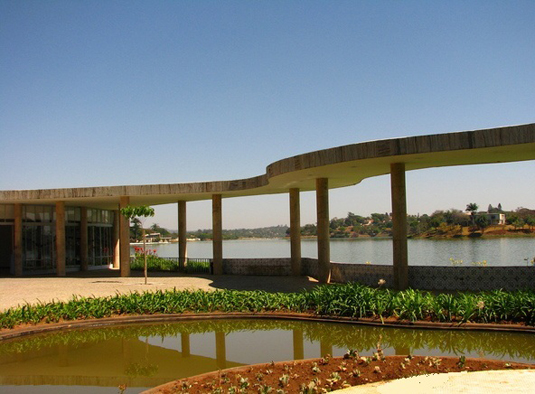 During his recent talk in Sao Paulo, Rem Koolhaas began by saying that when he was young he saw a picture of Brasilia and immediately wanted to be an architect and live in Brazil. I wonder how Niemeyer would have taken that. Once a reporter asked him how he felt about one day being gone but his still creations being enjoyed long afterwards. The answer was pure Oscar Niemeyer. Responding in his peculiarly casual existential way, he said that yes, but then that individual would also die, so…  What he failed to see is that yes, that individual would die, but others will keep coming and Niemeyer’s work will continue to move and inspire us and many more to come, after we’re long gone. 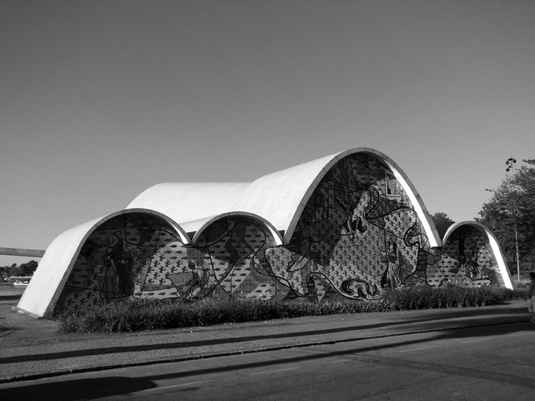