The Materials and Building Components of Modern Buildings

Our most recent post on Debating the Value of Mid-Century Modern discussed the architect as multi-party advocate and mediator. It was the last in a series that explored the interactions among the stakeholders of these buildings and how original design intent may hamper or encourage their rehabilitation and reuse. With this post, we begin a […]

Our most recent post on Debating the Value of Mid-Century Modern discussed the architect as multi-party advocate and mediator. It was the last in a series that explored the interactions among the stakeholders of these buildings and how original design intent may hamper or encourage their rehabilitation and reuse. With this post, we begin a series that will focus on the technical aspects of modern materials and assemblies, including how construction methods of the period affect today’s decisions about the repair and improvement of mid-century building envelopes. From the beginning, materials were significant to the design intent of modern architects and to the performance of their buildings. This trend first emerged in Europe before World War I, when design forcefully aligned itself with industrial production, challenging centuries of architectural values and design approaches. Visually, buildings no longer reflected history. Instead, they echoed the aesthetics of civil engineering and industrial structures. Traditional craftwork was replaced by factory-built components assembled on site with a minimum of expressive handwork, just as glass, steel, and concrete began to be viewed as expressive elements. This shift represented a deliberate affront to refined stone surfaces, the complexity of carved ornament, and the social hierarchies implicit in previous building facades and spaces. 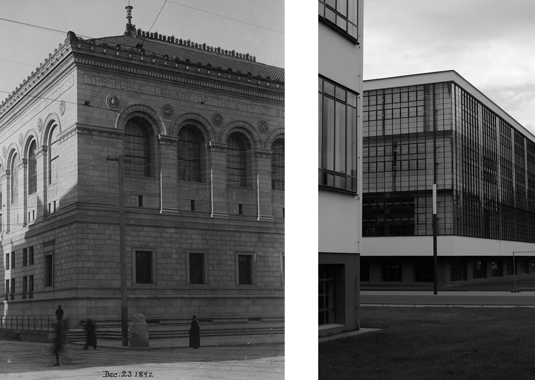 Set within the formal grammar of modernism that proliferated in Europe following the war, these new materials helped to convey an optimistic message: The built environment could be re-configured to eliminate the “social evils” of the past. Concrete, in particular, was introduced as an assertive finish on both sides of the Atlantic with the permanence of unit masonry but without associations to individualistic Beaux Arts ashlar and Georgian brickwork. Industrial implements and processes such as the mechanical bush hammer and reinforced pre-casting made it possible for architects to introduce dramatic textures and deep elements to these facades en masse, contributing greatly to construction economics. Simultaneously, real estate calculations and enclosure innovations moved building facades towards flatness and repetition. The convergence of these forces made the formal message of concrete almost messianic, taking hold in the United States in the 1950s. 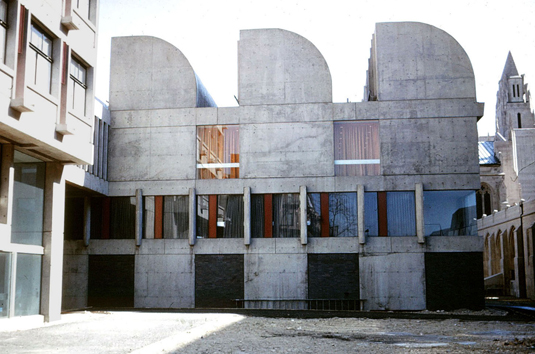 Building science took a backseat to aesthetic considerations for most mid-century American architects. Fossil fuels were cheap. Comfort standards were more forgiving than they are today. And un-insulated, monolithic concrete towers were built at schools including Boston University, Harvard University, the Massachusetts Institute of Technology (MIT), and New York University. Their architects seemed to disregard historical lessons in concrete assembly. The Romans, for example, never left raw concrete exteriors to withstand the elements—they covered them with clay brick or tile. The design fantasy that raw concrete wall sections could somehow perform against driving rain and prevent heat loss largely went unchallenged through a succession of major institutional and civic buildings. In the 1960s, concrete treatments became more expressive. American architects like Louis Kahn and Paul Rudolph began using the material as a symbol of matter itself, crafting pure geometry and soaring cantilevers with the material Rudolph called “mud.” The office of I.M. Pei, on the other hand, worked to make the smooth in situ concrete of the Massachusetts Institute of Technology’s (MIT) Green Building (1964, Cambridge, MA) blend into its surrounding context of limestone and tan brick. However, these sensitive expectations of the material were accompanied by the same disregard the architects had for detailing in more aggressive “Brutalist” structures, and problems soon developed for them, as well. 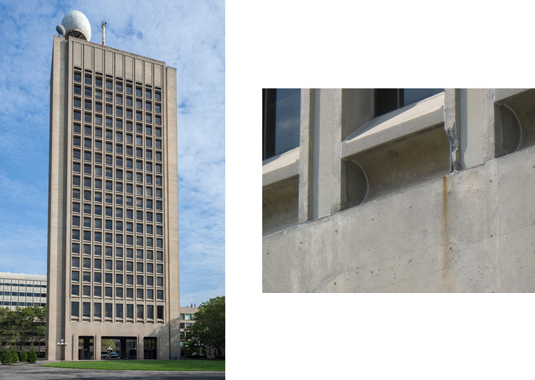 Structural elements weren’t the only challenge. The portfolios of Pei, Rudolph, and Joseph Lluis Sert contain a host of buildings with leaking windows and failed sealant and flashing details, as well. First introduced in the 1890s, modern windows, comprised of thin rolled steel sections combined with large spans of glass, were designed to be leak proof. Yet, where mid-century window assemblies met solid walls, leaks commonly occurred. In detailing the new, industrially produced components, the modern architectural community often fell short, and deficiencies were evident. The overhangs, copings, cornices, hoods, sills, and layered flashings of traditional construction were replaced by exposed butt joints, sealed only once with polysulfide caulk. In some cases, large, single panes were butt-glazed directly into shallow concrete reveals. As the concrete and sealants deteriorated, some “frameless” panes simply dropped away, allowing glazing to fall multiple stories to the ground. Our next post, “Concrete, the Offending Material,” will address repair strategies for typical modes of architectural concrete failure, followed by a focus on refurbishing windows and glazing assemblies.

Modernist Buildings to Watch: The house that Frank Lloyd Wright designed for his son, David Wright, in Phoenix, AZ, (1950-1952) is threatened with demolition. Its spiraling concrete block elevations are consonant with the architecture of Wright’s Guggenheim Museum (1959, New York, NY). Although there are some positive developments to report in its rescue, support is still needed in signing the petition (it’s easy to do) and writing letters to save the building. No known, unaltered Wright building has been intentionally demolished in the past forty years…this would be the first, an especially significant loss because it is a house created for one of Wright’s own.

Henry Moss, AIA, LEED AP, is a preservation expert and principal at Bruner/Cott & Associates, a Cambridge, Massachusetts, architecture and planning firm. This is the sixth in a series of Metropolis blogs written by members of Bruner/Cott’s restoration team that focus on the challenges and solutions for converting, rehabilitating, or reusing mid-century buildings. Upcoming posts will explore issues associated with this conservation, drawing on the firm’s long-term experience working on the repair, enhancement, and continued use of this architecture. Mini-case studies of buildings will include the MIT Stratton Student Center by Eduardo Catalano; Harvard University’s Peabody Terrace Apartments, Holyoke Center, and its Gund Hall for the Graduate School of Design by John Andrews; and Boston University’s School of Law and Law Library by Josep Lluis Sert. Design and technical problems associated with these projects as well as user/owner issues inherent to mid-century modern design will be explored.