MoMA PS1 Asks Urban Dwellers to Survive in Their Courtyard

An installation at MoMA’s PS1 brings up questions about the structures in which we live.

This summer in Long Island City, New York, people were living in the courtyard at MoMA PS1, in trailers, underneath a bridge made of scaffolding.  They’ve built their own system for water and a bathroom, and grew their own produce in a hydroponic system – plants in water, accompanied by fish, to fertilize them. The colony is almost self-sufficient.

The project is a brainchild of Gustavo Diéguez and Lucas Gilardi, the duo who make up a77 Architecture. With ColoNY, they bring up questions about the way we live, and the structures that support our lives. Their use of trailers relates back to ideas of nomadic lifestyles, temporary housing after natural disasters, and for the poor and transient. By installing ColoNY in a densely settled area, the architects remind us that nothing in cities is exempt from disasters that affect the rest of the world in these urbanizing and tech-dependent times.

“In our previous projects like We Can Xalant, Nomadic Cultural Center or El Gran Aula, we tried to move the museum and cultural dynamics to the streets,” the architects responded to my queries in an email. “A reverse action happens with the ColoNY: the museum opens its doors to become livable. The museum becomes a house, hotel, community or neighborhood, a portion of city to think about the future of cities and the environment.” 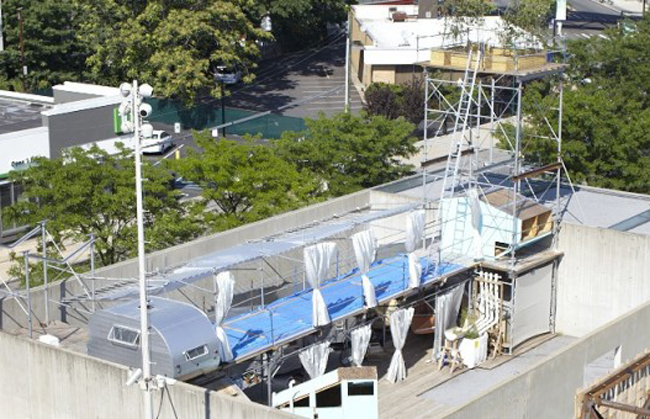 A view of ColoNY from above.

Through this project, a77 managed to build an intriguing structure, and create a platform on which participants and visitors can question the roles that spaces play in the activities of their daily lives. Because the installation was visible throughout the process of building it, visitors had the opportunity to see everything being made.

The whole of ColoNY is not about the finished product, it’s not about the physical structure that’s present, but it’s about all of the energy that roils in the courtyard. The volunteers involved in the project and the attitude of creating a brand new colony from next to nothing, transform the location from a static installation to a social experiment.

Without the security of the museum setting, would viewers interact with such a provocation differently? Would they take fewer pictures? If this were on an empty lot somewhere in Queens, would belongings be stolen, would more activity take place inside the trailers, rather than in the common areas outdoors?

If we took this exhibit out of the city entirely, into a desert somewhere, what would that be like?  Would it be like Burning Man, but tamer and built for longer-term occupancy? In some ways, ColoNY is similar to an intentional community, but the transient quality of the exhibit changes that, and presumably changes the way residents interact.

It’s inherently strange to look at an exhibit where people are part of it. What other situations are there when it’s normal to watch people going about day-to-day activities? ColoNY, in that respect, is changing a social norm and altering the way people in a museum setting interact with one another. This is much more than just trailers and scaffolding. ColoNY asks some timely and intriguing questions about the way we coexist.

The installation will be on display in the outdoor space at MoMA PS1 until the end of EXPO 1 on September 2.

Samantha Macy is a blogger and designer interning at Metropolis.