Architects Test Out Emergency Housing Prototypes to Combat Next Sandy

Garrison Architects and the NY Office of Emergency Management have developed a prefab, modular housing solution for those misplaced by disaster.

Superstorm Sandy changed the way we look at design at every level in New York. The knowledge that there lie more superstorms in the city’s future has pushed the Office of Emergency Management (OEM) into high-gear, and this unlikely department is becoming one of the more design-savvy parts of city goverment. In 2008, the OEM launched the “What if NYC” competition, which challenged architects to imagine residential solutions for a post-disaster New York. Sandy gave the project a renewed sense of urgency, and a second call for architect solutions was announced last year. Eventually Garrison Architects, a firm well known for embracing socially conscious, post-disaster design with modular construction, was selected to develop a prototype.

Their efforts were unveiled in Brooklyn in late June, as the first prototype was introduced to a local community in an effort to test, broadcast, and gain popular support for the project. “The units are not elaborate,” says architect James Garrison, “but that’s the great thing about architecture—when you design something thoughtfully, it seems luxurious!” The units, ranging from one-bedroom, 480-square-foot and 3-bedroom, 813-square-foot configurations, incorporate architectural features such as a balcony and carefully placed windows and furniture that serve to elongate the small footprints. From the outside, the units don’t seem necessarily out of place, just noticeably more modern. 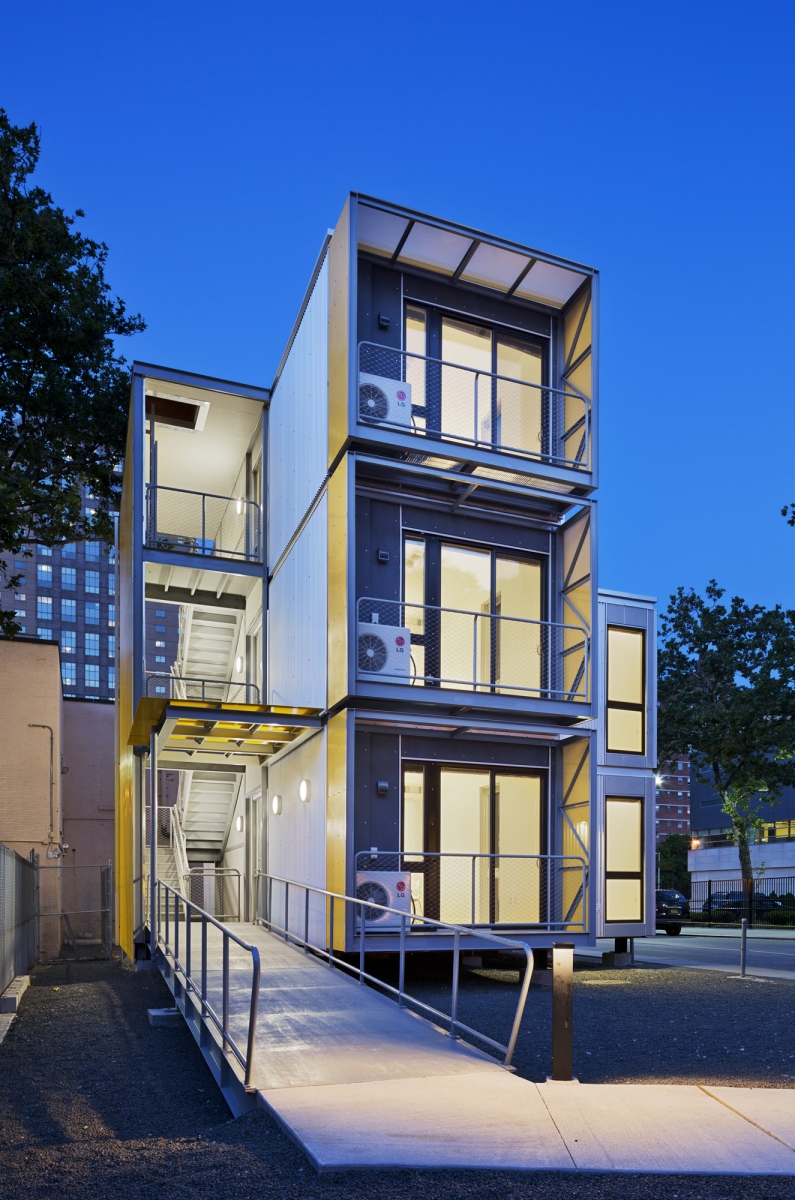 The units will go through a year of testing before being opened to inhabitants.

No coincidence there. Context was key in designing the units, which are ultimately intended to house people within their own neighborhoods. (OEM is currently working on figuring out exactly how deployment will work.) This is really the only option in such a dense urban area, but that doesn’t mean that it’s without its challenges and constraints.

The biggest question—how long are the units meant to last? Fitting them into existing New York neighborhoods would further densify an already claustrophobic urban environment (and may even have to take up precious public space), suggesting that temporary deployment is perhaps the best solution. Again, not that easy. 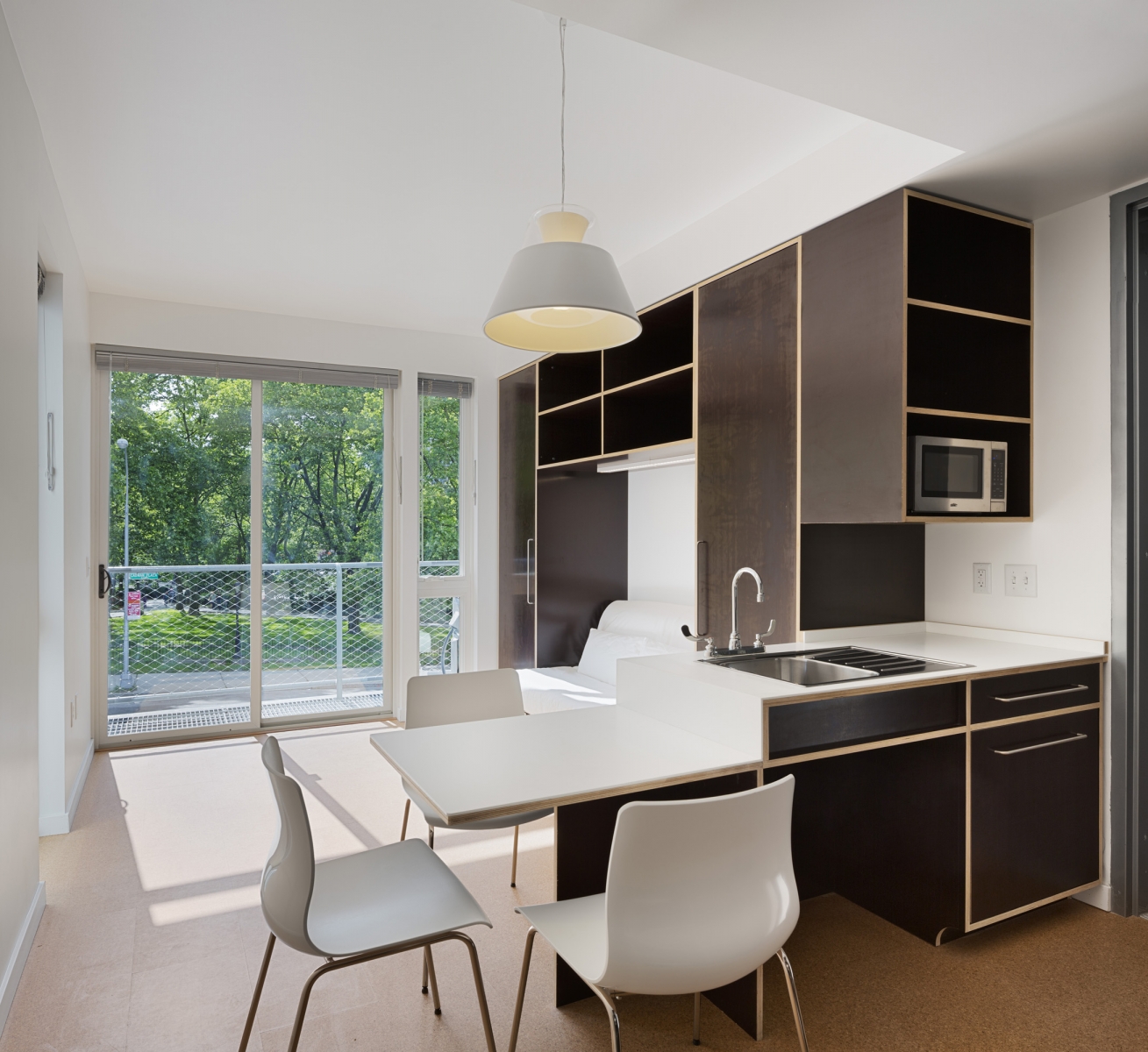 The project employs recyclable materials like cork flooring and sustainable components, like each unit’s double-insulated shell and integrated shading at entry and window openings to lower solar-heat gain.

“The truth is, when you go to the trouble of purchasing and erecting housing, even when [it is] relatively temporary in nature, there’s a tremendous cost involved,” Garrison explains. “And most of our cities need housing—New York needs hundreds of thousands of units of housing! So the last thing you can imagine is putting up affordable housing and then taking it back down.” 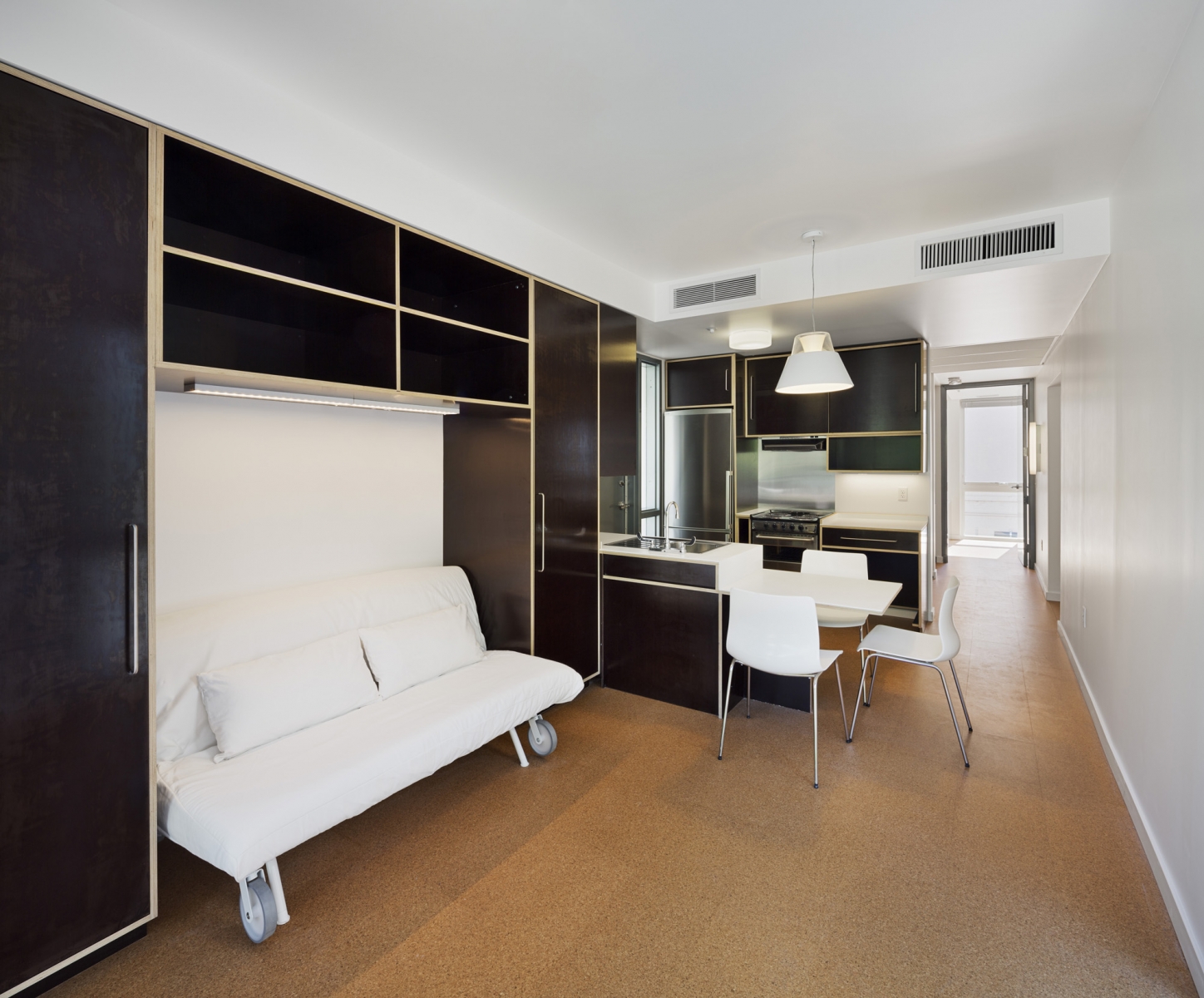 Each unit is generously spacious, with a living area, bathroom, fully-equipped kitchen, and storage space.

Space will always be a challenge for New York, but at least as far as housing typologies go, Garrison’s prefab prototype could point the way to a solution. It takes manufacturers one shift manning one line to produce a unit, meaning most manufacturers will be able to produce as many as 28 units per week. Though that’s not nearly enough for an actual disaster situation, multiple manufacturers are under contract to crank out the homes when such an event strikes.

That said, this isn’t too much of a safety net. “It’s post-disaster interim housing so it cannot be the first response,” says Garrison. “It just won’t be fast enough. But it can be a very fast second response.” The governments of Tanzania, Malaysia, and Korea, all of whom are in talks with Garrison Architects to develop their own post-disaster housing solutions, seem to agree. In the wake of so many catastrophic natural events, planning ahead seems to be on everyone’s mind.