Emphasizing transparency and permanence, a new Planned Parenthood in Queens, N.Y., hopes to be a replicable template for future clinics. 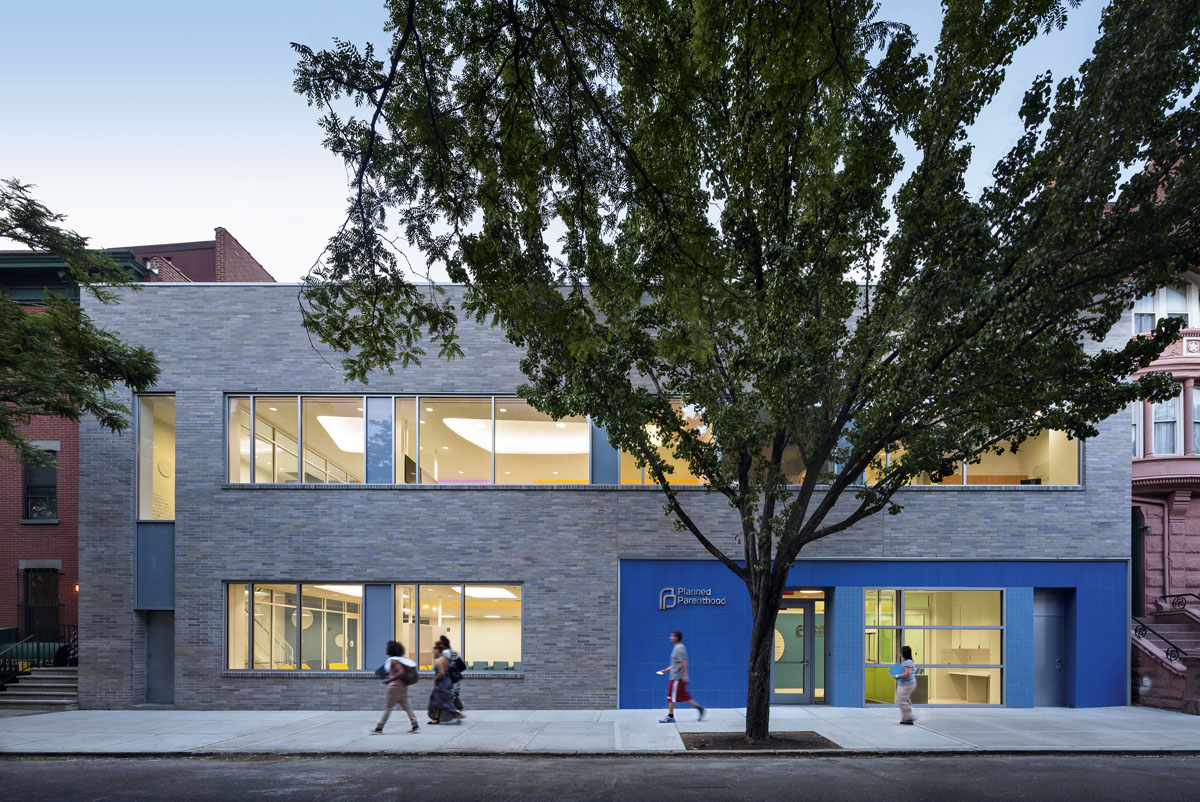 The building that houses the new Planned Parenthood clinic in Queens used to be a lumber factory. Chief architect Stephen Yablon cannibalized the party walls but otherwise built the space from the ground up, moving the entrance slightly off center for a more contemporary, forward-thinking look.

Is there any American institution more polarizing than Planned Parenthood? Stop a random stranger on the street, and you’ll undoubtedly get an earful of vitriol or a gratitude-laced testimonial. The women’s reproductive health services provider—which celebrates its hundredth anniversary this year—has been particularly beleaguered of late as the far right demands withdrawal of its federal funding (last year a pro-life group released videos—since debunked—purporting to show that the organization was facilitating the illegal sale of fetal tissue).

It was under these difficult circumstances that Planned Parenthood opened its new clinic in Long Island City, Queens, called the Diane L. Max Health Center. The clinic is a casually contemporary two-story gray brick building on a mostly residential street lined with brownstones. The logo, which sits next to the entrance, is modest in proportion to the signage of, say, the diner across the street, but hardly discreet. “We wanted to convey that Planned Parenthood is an important institution,” says Stephen Yablon, the chief architect of the building, “and we’re not trying to hide that.”

Indeed, almost every aspect of the design is meant to communicate three things: that Planned Parenthood is here to stay; it offers high-level, advanced care; and it is for everyone—no one seeking help is turned away. (The Diane L. Max center is expected to get around 17,500 patients a year.) To emphasize transparency and openness, Yablon put the waiting rooms on the first and second floors at the front of the building, where there are large windows, so patients benefit from ample natural light and are treated to a clear view of the picturesque street. Meanwhile, the security checkpoint at the entrance provides reassurance. “People know it’s safe,” says Yablon, “but we’re not making it feel like Fort Knox.”

A fort is probably the last thing to come to mind upon entering. Clean white walls and cheerful graphic decorative elements, such as a round sign that says “welcome” in 11 different languages, in honor of Queens’ celebrated diversity, indicate that this facility is new, clean, and hygienic. David Vanden-Eynden, a New York designer who helped Stephen Yablon Architecture with the signage and wayfinding, says that he and the architects toured some local existing Planned Parenthood clinics, including one on Bleecker Street in Lower Manhattan, which opened in 1997. The city’s other Planned Parenthood facilities (with the addition of the Diane L. Max center, there is now one in every borough) tend to be older, with aging apparatuses. As Vanden-Eynden comments, when you go to a health clinic, “you don’t want to feel like you’re going to see a creepy doctor and some old nasty equipment.”

Those who visit the new Diane L. Max center will feel cared for, even pampered, at a time when they very much need it.

Probably most effective in making the space feel fresh and more modern is the use of color, which punctuates the interior via LED lights that travel down the hallways, offering a cheerful glow. The east and west stairwells flanking the building are painted blue and green, which also provide a loose organizing principle to the structure: the green stairs lead down from the waiting room to the clinical areas, and the blue lead up to the waiting room and a community area for educational purposes. (Librarians from the Queens Library, among other local organizations, attend workshops on sexual and reproductive health.)

Yablon put at least as much thought into the color palette as the materials, and, with Vanden-Eynden’s help, expanded it to comprise some 12 colors in all, including pink and orange, two hues not normally associated with health care. Color is used to greatest effect in the recovery area. The rear wall undulates, forming inset individual nooks with reading lamps and curtains in which patients can rest and relax after a procedure. Here, the blue and green on either side of the building meet in a gentle gradation from emerald to cerulean, which makes the space restful and vibrant, more like a spa than a clinic.

“People associate Planned Parenthood with one thing that they provide,” says Vanden-Eynden. “But 95 percent of what they offer is really health services.” It’s true: Planned Parenthood offers birth control, breast cancer screening, and gynecological exams, as well as health insurance counseling. But it is abortion—that one, all-too-frequently unnameable thing—for which so many women depend on Planned Parenthood. Thanks to the thought that went into building this facility, which will, one might hope, serve as a prototype, those who visit the Diane L. Max center will feel cared for, even pampered, at a time when they very much need it. 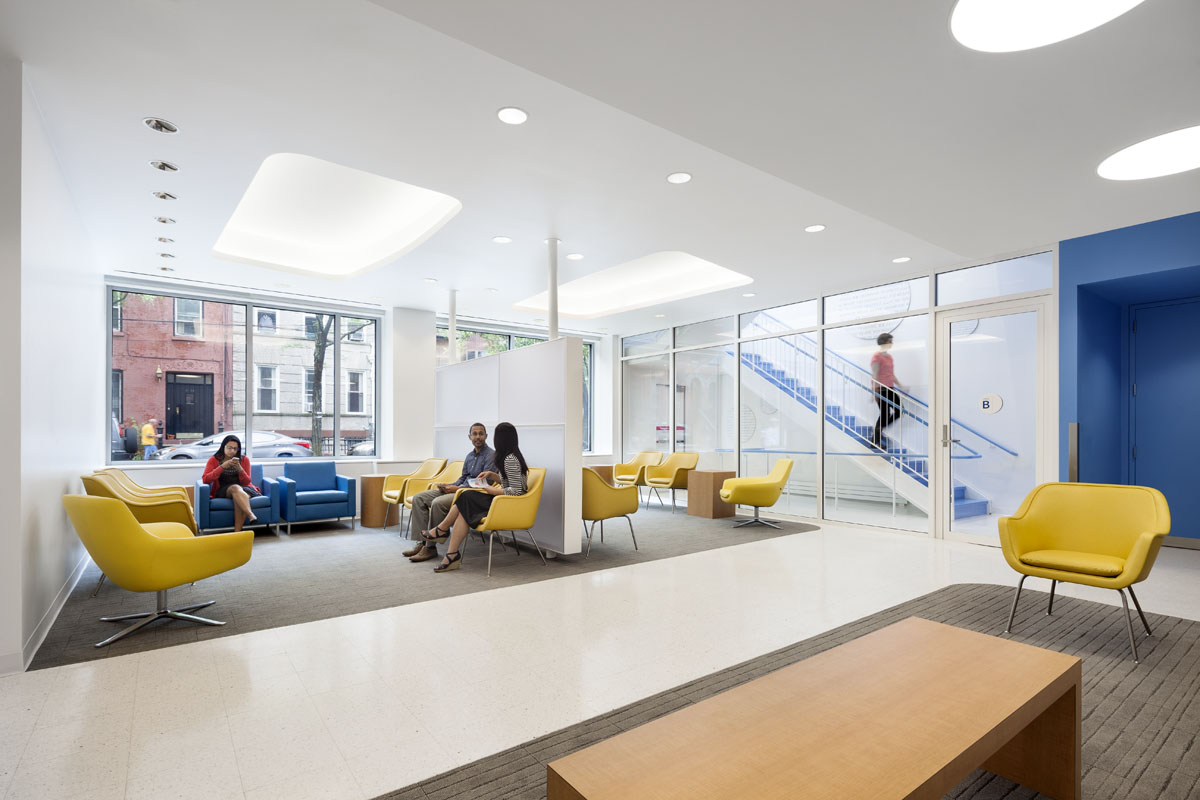 The waiting area inside the center. “The new Diane L. Max Health Center completes our dream of providing health services and education in all five boroughs in New York City,” said Joan Malin, President and CEO of PPNYC. 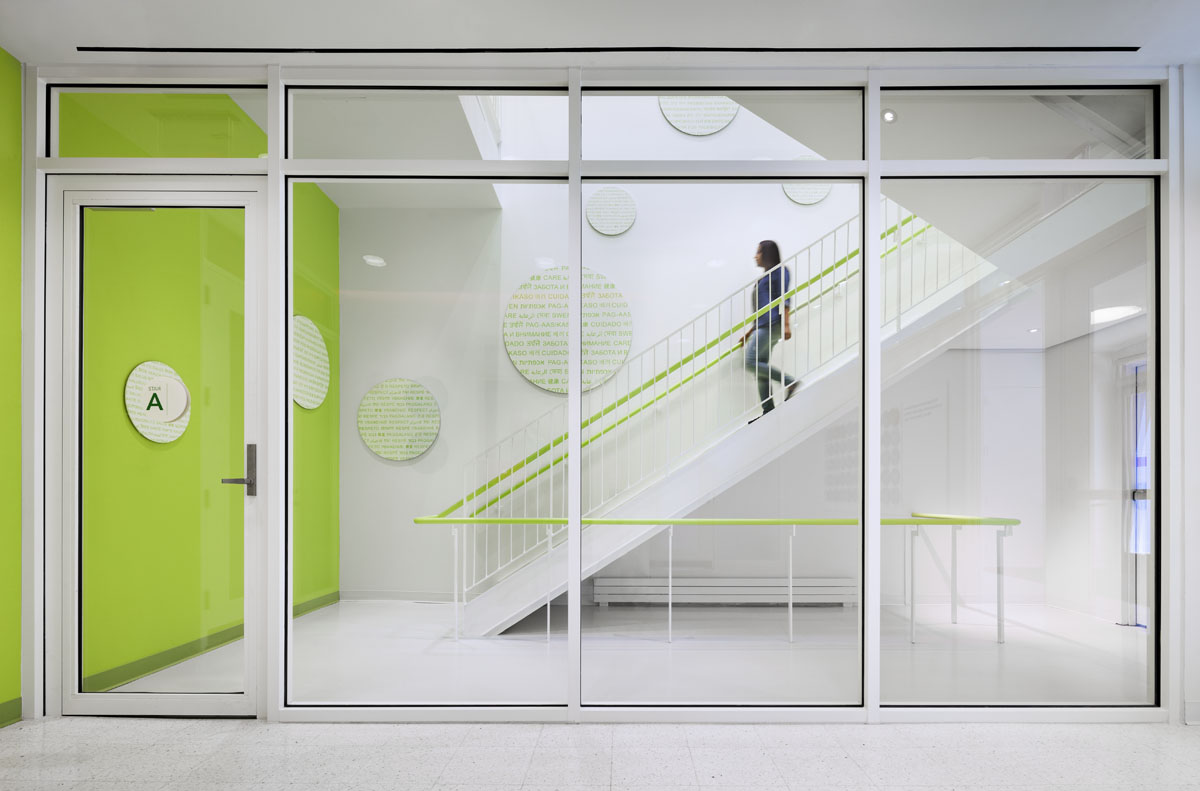 One of the most striking features of the new clinic is its use of color. The building stairwells are green and blue, which blend together beautifully in the soothing recovery room (below). 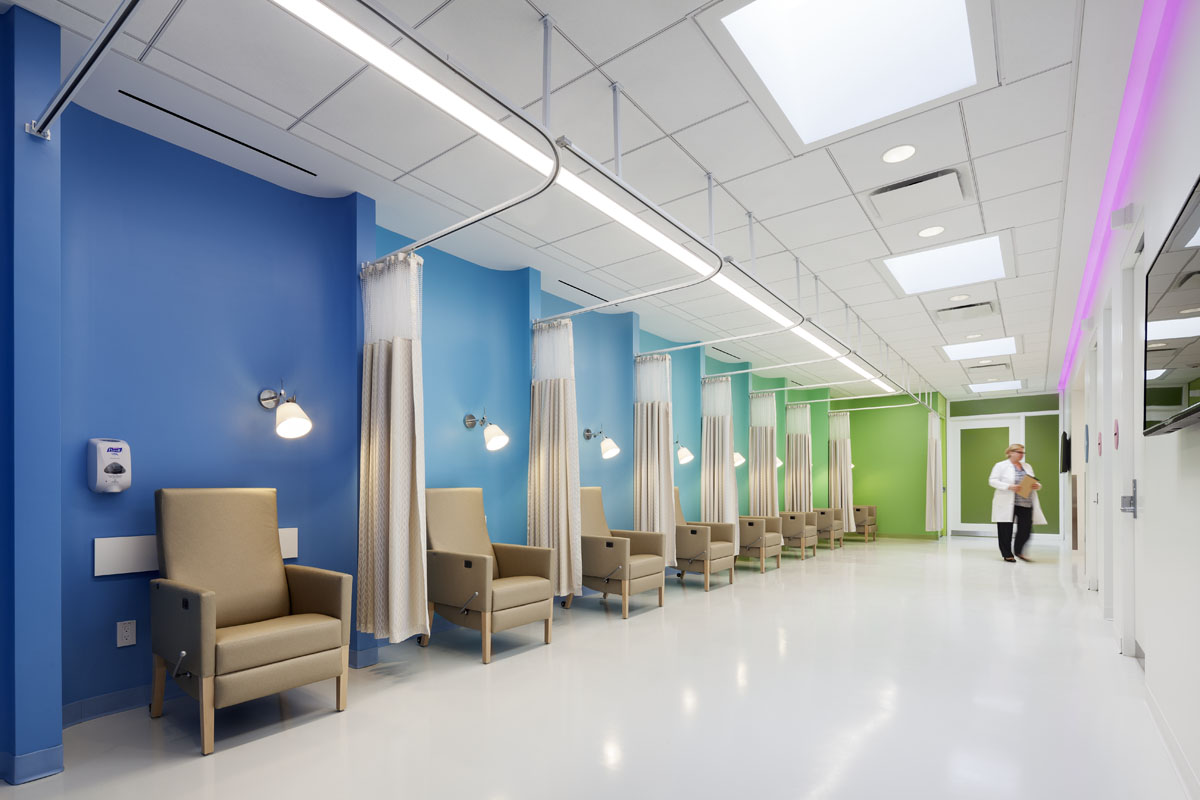 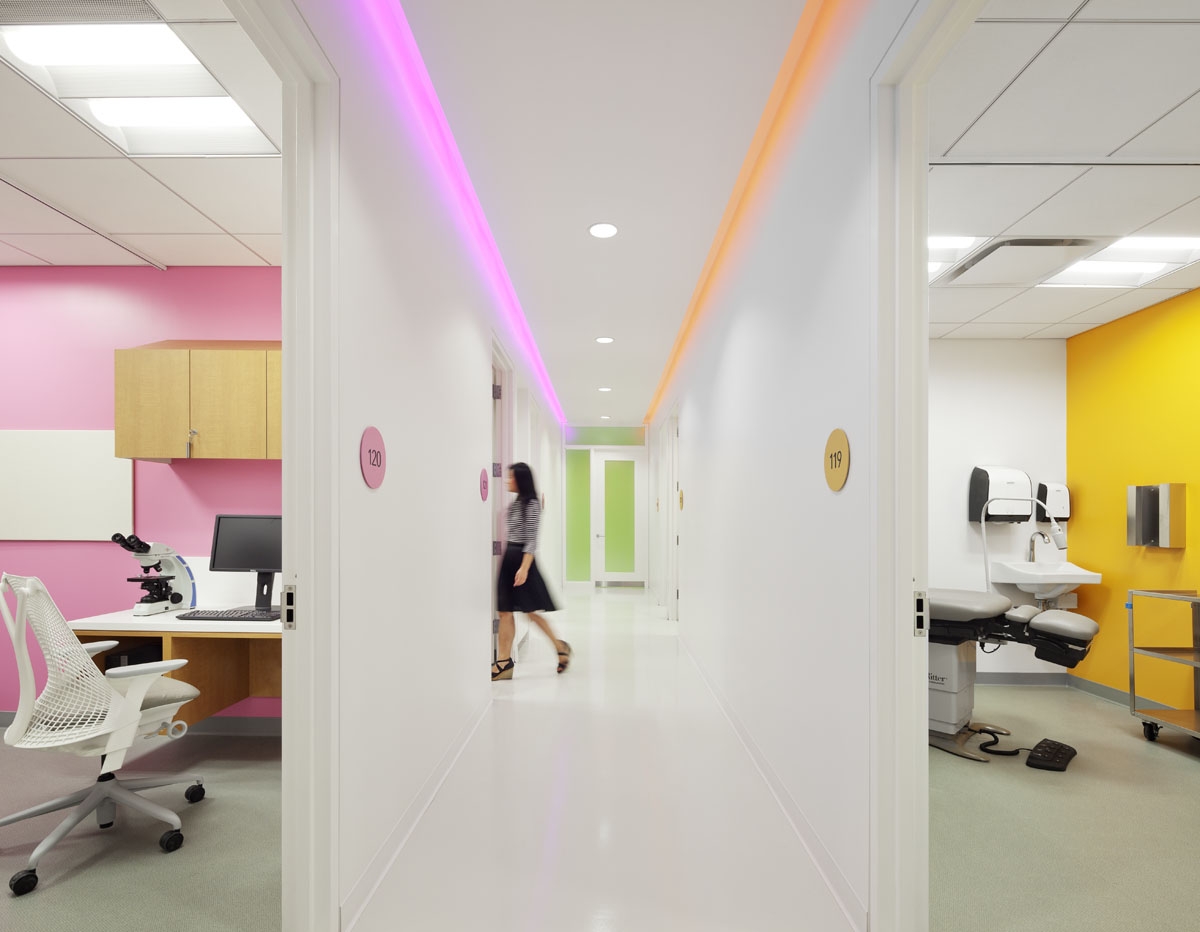