Addition with original palace in the backgroundThe Isabella Gardner Museum started as a “collection museum” by an ambitious, sensitive philanthropist who made her home into a palazzo for the arts. Now, over 100 years later, its founder long gone, the museum has been brought into the 21st century, to better serve the mission she envisioned. Is […]

Addition with original palace in the background

The Isabella Gardner Museum started as a “collection museum” by an ambitious, sensitive philanthropist who made her home into a palazzo for the arts. Now, over 100 years later, its founder long gone, the museum has been brought into the 21st century, to better serve the mission she envisioned. Is it possible to improve on such personal, delicate design and keep its unique spirit present? The answer, in short, is “Yes”.

After a long research for the appropriate designer, the museum’s board settled on Renzo Piano Building Workshop (RPBW). Their expertise in programmatic and technological solutions was, without a doubt, a plus. But more than that, it was their refined aesthetic sensibility that makes buildings of a subtle yet lasting beauty; this made them the perfect candidate to tackle the project respectfully. 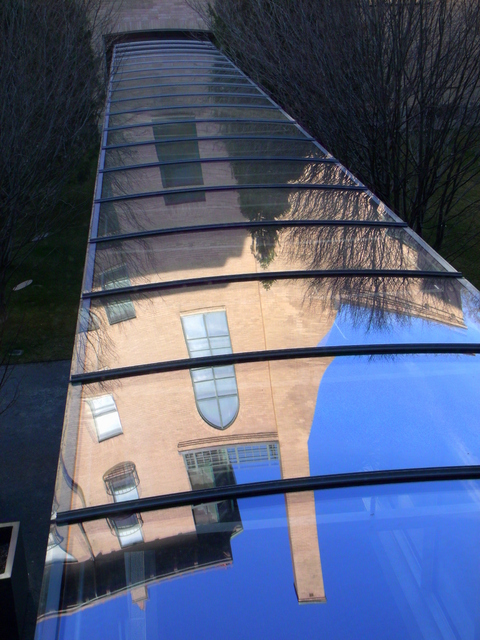 Glass tunnel leading into the palace

“Renzo listens,” says Anne Hawley, the museum’s director. “We would have marathon full-day’s meetings and no detail would escape him. Months later he would recall what was said and discussed. And he was able to see things as an architect, a builder and, very important to us, as an artist.”

The goals for the project were clear: Make room in the original palazzo for the proper display and enjoyment of the collection, freeing up space that had been taken over by the more functional activities, as the building went from being a residence museum to a public museum. And pave the way to the future of the Gardner. 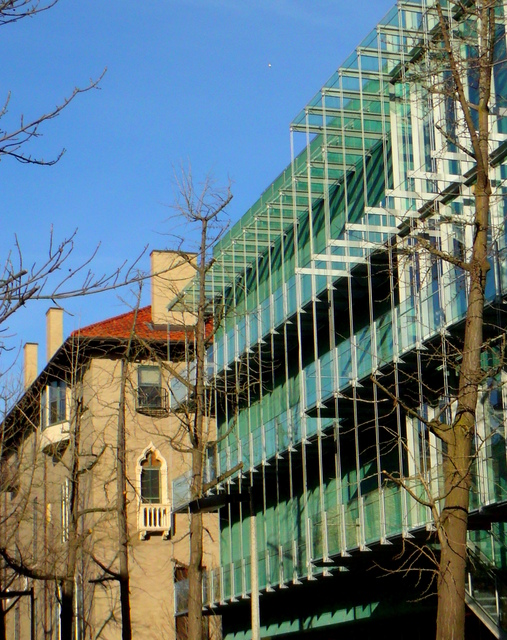 Northwest elevation, facing Palace Road, with palace in the background

Andy Klemmer, principal of the Paratus Group, responsible for coordinating the institution with the architect, and overseeing all aspects related to the construction and project development, sums it up: “I feel the Gardner deserves kudos for writing a building program that was so realistic and practical. There is no grand hall for events and no grand donor wall. Just pure program, just institutional needs. Architecturally, Renzo had to balance a small site, the visitor experience, preserving the prominence of the palace as the focal point, fitting a lot of program inside, do it all on a challenging swamp-like terrain and on a budget. And still with all these constraints had to make it a pleasure. That’s a lot to balance.” 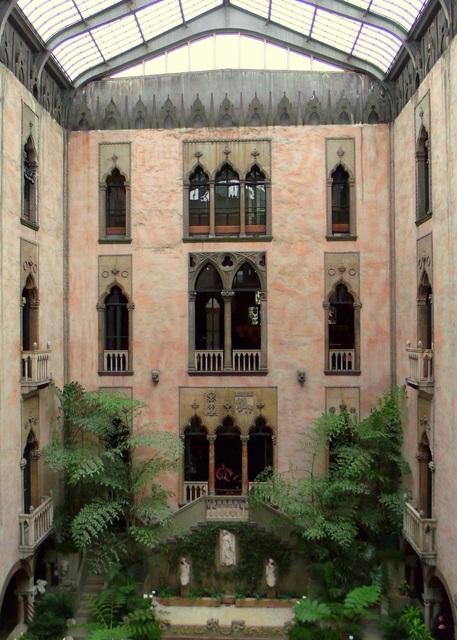 The original palazzo, designed by Willard T. Sears with input from Mrs. Gardner, was inspired by a 15th century Venetian palace–it may be outdated for its modern functions but it has an undeniable original charm of its own.

“Upon our first visit, as we walked into the courtyard we were taken by its fascinating sense of suspended atmosphere: the play of light and shadow, the exuberant plants and the flow of space. We knew then this was an opportunity to do something special,” says Emanuela Baglieto, architect manager working with Piano for over 23 years. “The sequence and drama of entering that building was something to be preserved in the new entrance.” 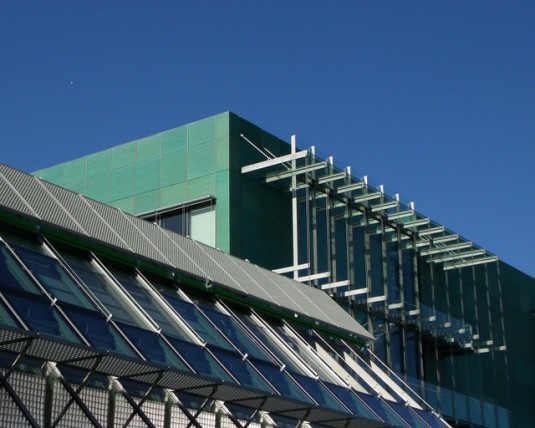 The new building, situated slightly behind the palazzo, where a former carriage house used to be, is an elegant cubic composition of four volumes, proportionate in height and mass to the original building. These volumes are organized around an axial circulation system, with a spacious stairway. Within these volumes are the concert hall, the temporary exhibition gallery, administrative areas, conservation labs and support spaces for the performance hall. 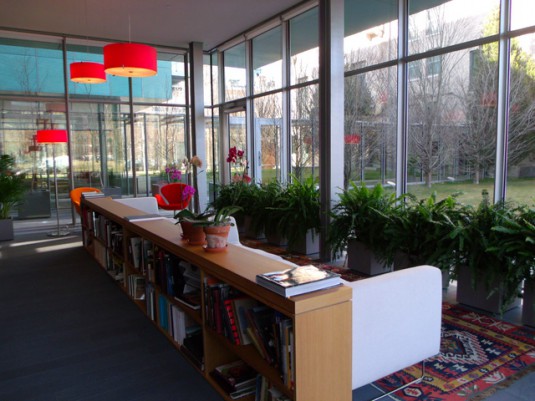 South of these four volumes, are the greenhouses, under a sloped glass roof that doubles as the window of two second level apartments for the Artist/Scholar-In-Residence program. On the ground floor are the ticket office, greenhouse, a welcoming visitors lounge, gift shop, café, and art workshop room. All separated by the flow and transparency of glass walls that enable visitors to grasp the many activities that make the Gardner such a lively institution, beyond its art collection. 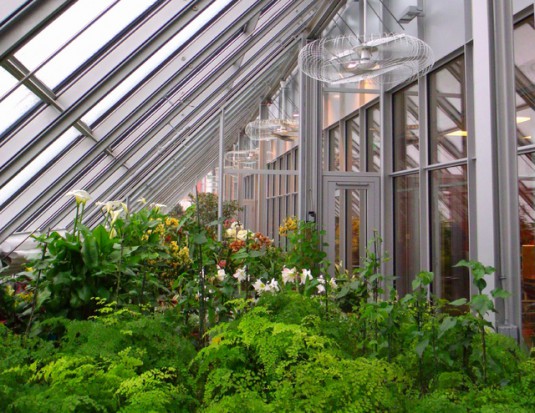 An essential part of the design is the connecting glass corridor, cutting through the lawn, 50 feet between the two buildings. Rightly called the “umbilical chord” by Piano, this transparent tunnel (the sides of which are lined with trees that will eventually envelope it, filtering the light and sight as one crosses it) does more than link the new to the old. It signals a life exchange between the two anachronistic structures, where the addition breathes new life into the original building, while the palazzo’s seductive chiaroscuro setting informs the genetics of the new one. 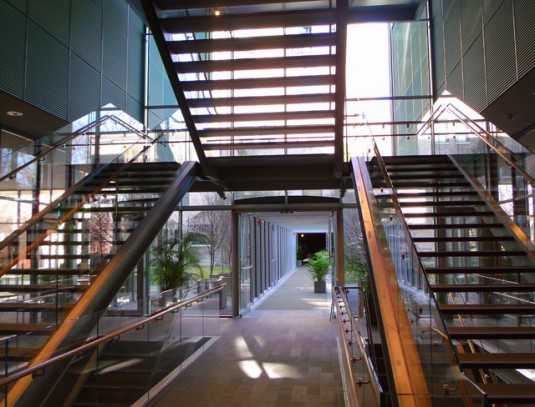 Grand staircase with glass tunnel in the background

This exchange, attesting to RPBW’s design sensibility, happens throughout the new building. Starting with the exterior walls (clad in green pre-patinated copper and red brick), where the fire stairs were attached by a suspended open metal structure, with its rods and steps, creating a lacey light effect that is a throwback to the beautiful play of light seeping in through the palazzo’s courtyard skylight. 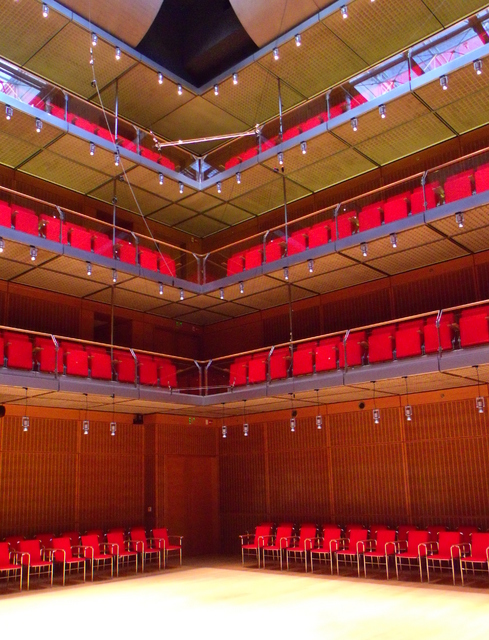 The two main public rooms in the new building are the concert space and the temporary exhibit gallery. The Music Hall was arrived at as a collaboration between acoustic engineer Yasuhisa Toyota and RPBW. It sits 300, within three balcony levels of single row seats, around a square center stage topped by a tour de force skylight that brings in natural light but keeps out the noise of airplanes flying above. The room’s scale and layout allow for an interesting combination of top acoustic performance, while providing the intimate listening experience the Gardner audience was used to at the palazzo. 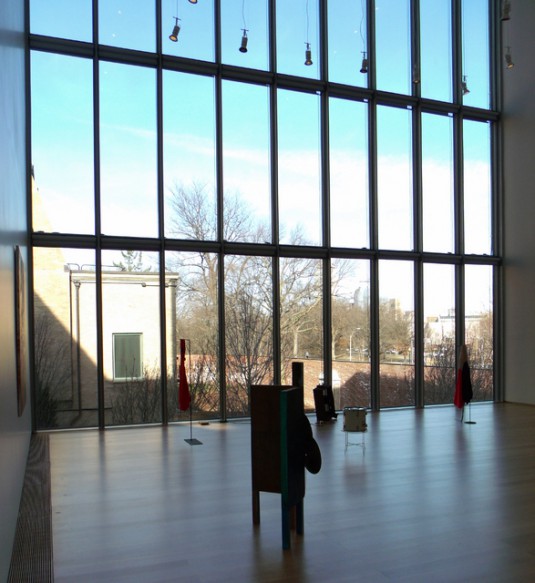 The temporary exhibit gallery seems to express best what the design was able to accomplish with the blending of old and new. An expansive (in contrast to the palazzo’s galleries and rooms) 1,500 sq. ft. space, it features a movable translucent ceiling that can be set at 12, 24 or 36 ft. depending on the exhibit and offering the mixed scale—from grand to intimate—found in the palazzo. This allows for a certain museum quality of space without sacrificing the charming domestic scale that Gardner is known for. And, like the palazzo, it also brings the outside in, but now adding a contemporary touch. 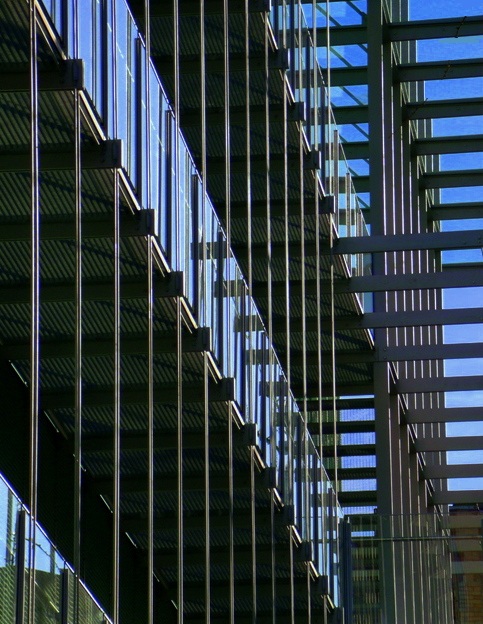 The large glass curtain wall makes a respectful nod to the original building and offers a wide view to the Boston skyline over the Fenway Gardens, establishing an effective triangular visual connection between the new structure, the palazzo, and the city. And by doing so, it makes a strong statement about the evolution of the institution since its beginnings, from private to public. “It affirms the institution’s presence in the urban fabric and city life,” as Baglieto puts it. “Theirs is a city- friendly and open museum program, but the building housing it was not.”

It is a ‘tight’ design that goes to the program’s needs, without any superfluous whims. Or as Klemmer told me, “There’s no ‘vanity’ in this project. All that is there is what was required. And Renzo does it without ever losing sight of making it beautiful and of its time.” Klemmer should know, having worked with Piano on many projects, including New York’s JP Morgan Library and the KimbellArt Musem in Fort Worth, currently in progress. 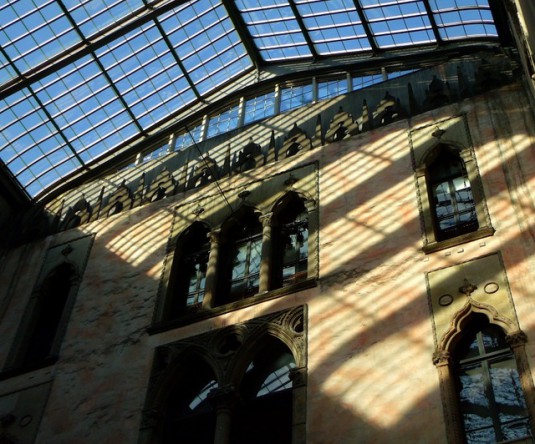 Original indoor atrium at the palace

With Stantec as architects of record for the project (managing the essential process of translating Renzo’s designs to reality) what RPBW accomplishes is to bring the museum back to what it was originally, clearing the carefully arranged palazzo to do what it was intended to when Isabella Gardner envisioned it. The addition gives the space it needed for the contemplative enjoyment of the collection as Mrs. Gardner wished, and creates space for the parallel activities of the museum. The design picks up where the palazzo left off. It extends and re-interprets its poetry, taking a cue from its Venetian dreams and applying its own magic. It enables the institution to bring forward its mission and meet the demands of cultural life in contemporary Boston.