OfficeUS Rethinks How the Architectural Profession Is Run

Inside the U.S. pavilion’s “offices” at the Venice Architecture Biennale

“The way we work influences how we think,” said Storefront for Architecture director Eva Franch i Gilabert to a crowd that had gathered in the New York offices of Rafael Vinoly last month. They were there for a conversation hosted by Franch and colleagues Ana Miljacki and Ashley Schafer. All are the curators of the U.S. pavilion at the 2014 Venice Architecture Biennale, which opened on June 5. The project, dubbed OfficeUS, examines how American office practice has changed in the course of the last century and the form that change has taken.

I was in Venice when Franch and co. inaugurated the pavilion to the press. The exhibit was clearly different than others in the Giardini (the parkland where the national pavilions are stationed), in part because the massive content it compiled, and also the interactive-based component hinted at in the show’s title. Here, the emphasis is on the content, assembled in the esoterically-named “repository,” and the act of parsing through it.

The repository comprises information packets of some 1000 projects by over 180 U.S. architecture firms, mostly beginning in the postwar period with the rollout of the Marshall Plan. “Every firm is represented with its own booklet. We want to understand the relationship of these offices and its protocols to the work that it produces,” says Schafer, a professor at Architecture at the Knowlton School at Ohio State University and a co-founding editor of Praxis. In other words, “it’s not the office for the office’s sake, but how that office environment and their processes affect its architecture.” 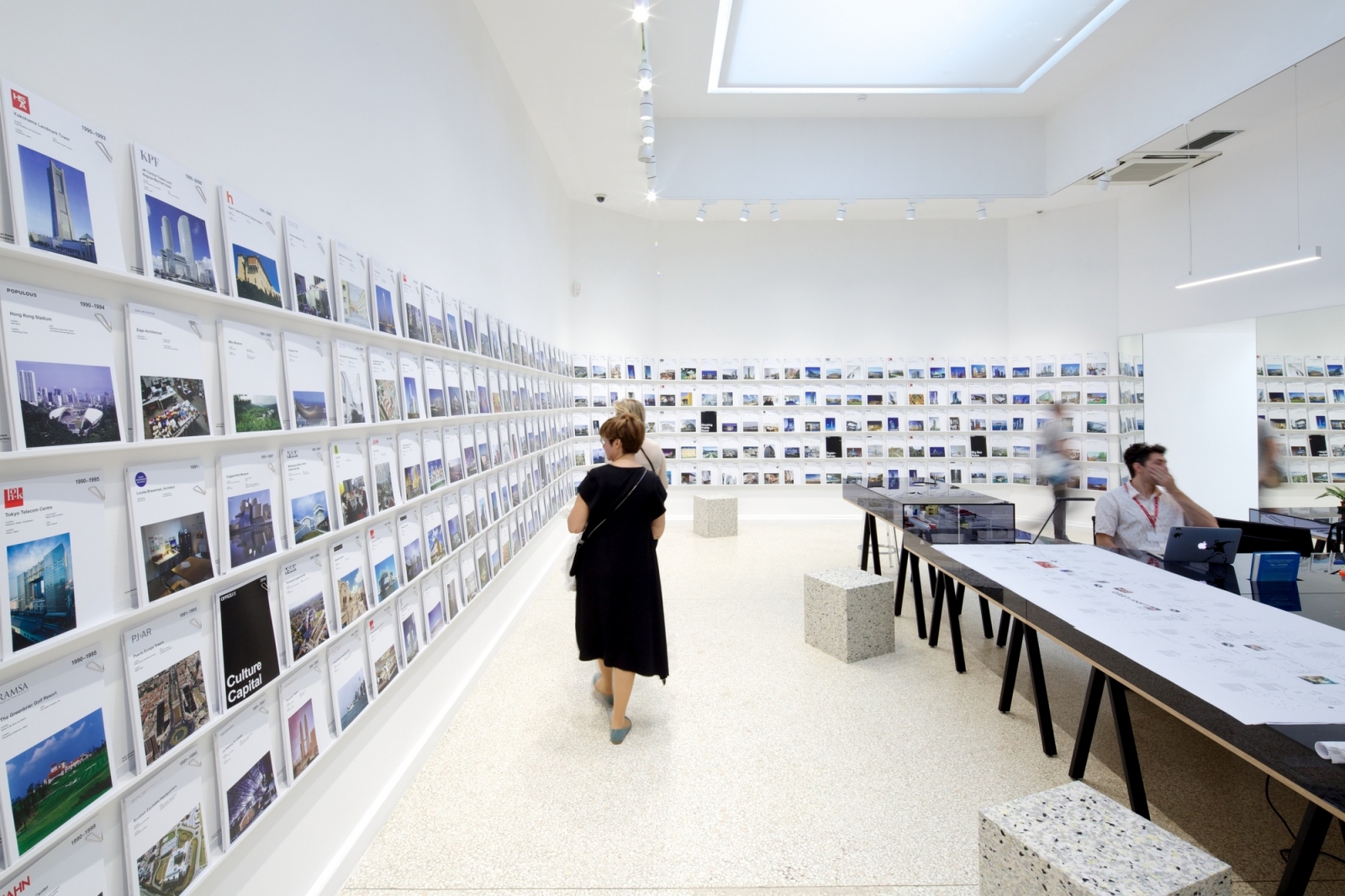 “The ambition of the repository,” Miljacki, a professor of architecture at MIT, adds, “is to present and contemplate work of U.S. offices from the particular angle of ‘abroadness,’ which has never been done at this scale before.” The booklets, arrayed in a display by the young New York-firm Leong Leong, are presented “in a such way that the historical background is not completely lost. We want to understand [what was] their thinking at that time.”

But the curators’ ambition for the project goes beyond just establishing a broad historic timeline. They want their research findings to fuel new ways of thinking about the office, which in turn, could ultimately lead to new ways of thinking about architecture. Thus, part of the pavilion will host a working office, aptly titled “The Office,” that functions as an interactive element not usually found in biennale exhibits. 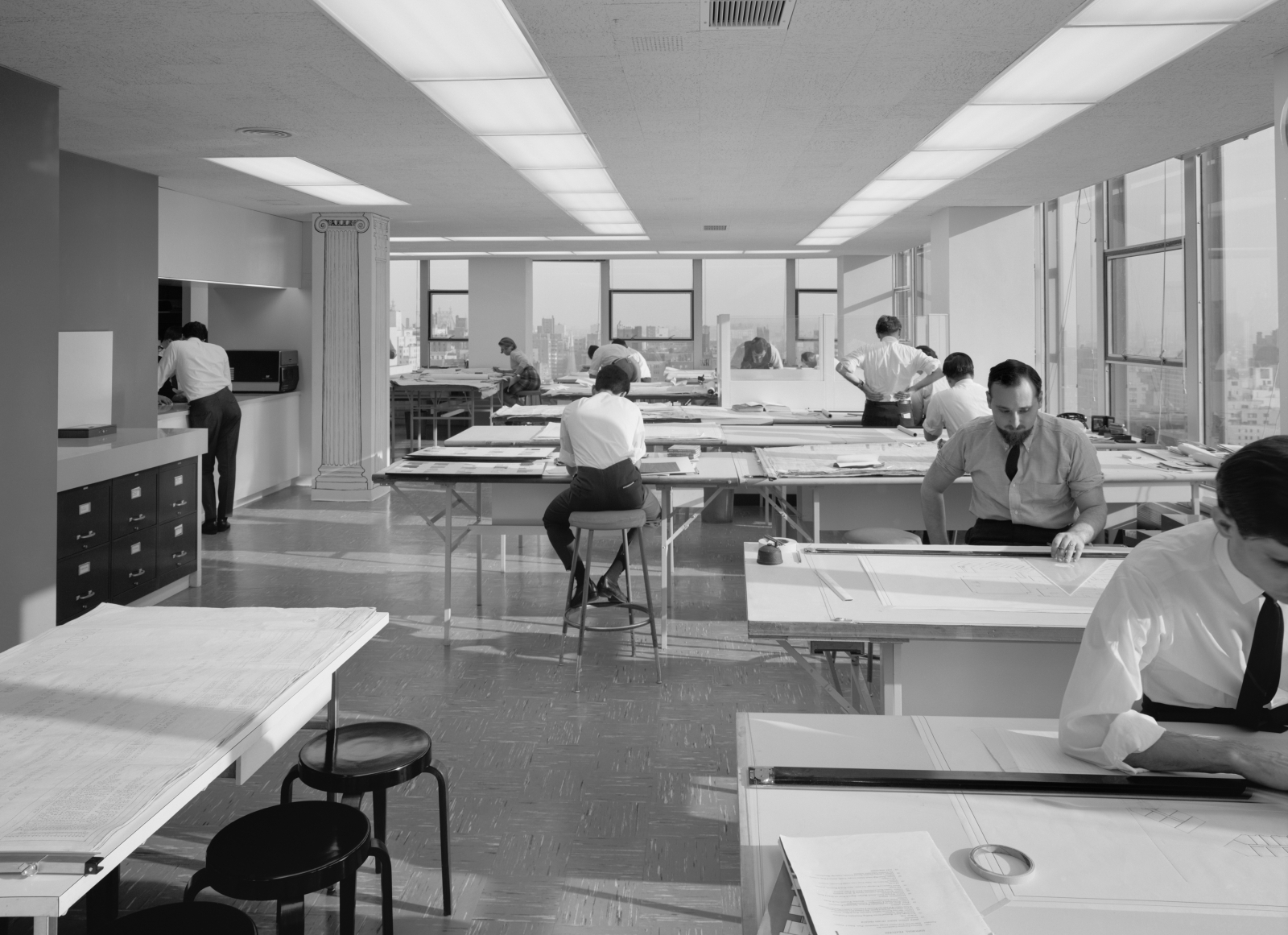 The Morris Lapidus office, Miami, 1964. Some of the firm’s projects number among the 1,000 or so case studies that make up the “repository.”

“Once inside the pavilion, we wanted the interiors to be understood as the experience of visiting a working office, and so there will be people sitting at desks, doing actual work,” Schafer says. The idea is that incoming visitors would “have the option of picking up one of the many firms’ folders, sit down and try to understand some of that by talking and interacting with some of the people working, know more of what they are doing.” The labor in question, Schafer explains, will consists of a series of regularly-scheduled workshops. Each week a different team of visiting experts in architecture and related fields will tackle different subjects related to materials culled from the repository.

There’s also the potential for this “live office” to act as an agent of dissemination. As Miljacki explains: “We want to produce a large context in that OfficeUS allows for a super-connected and engaged discourse globally. So if there is a conversation happening on the ground there that produces interesting exchange, we want those questions to be relayed back to the real world practice.” 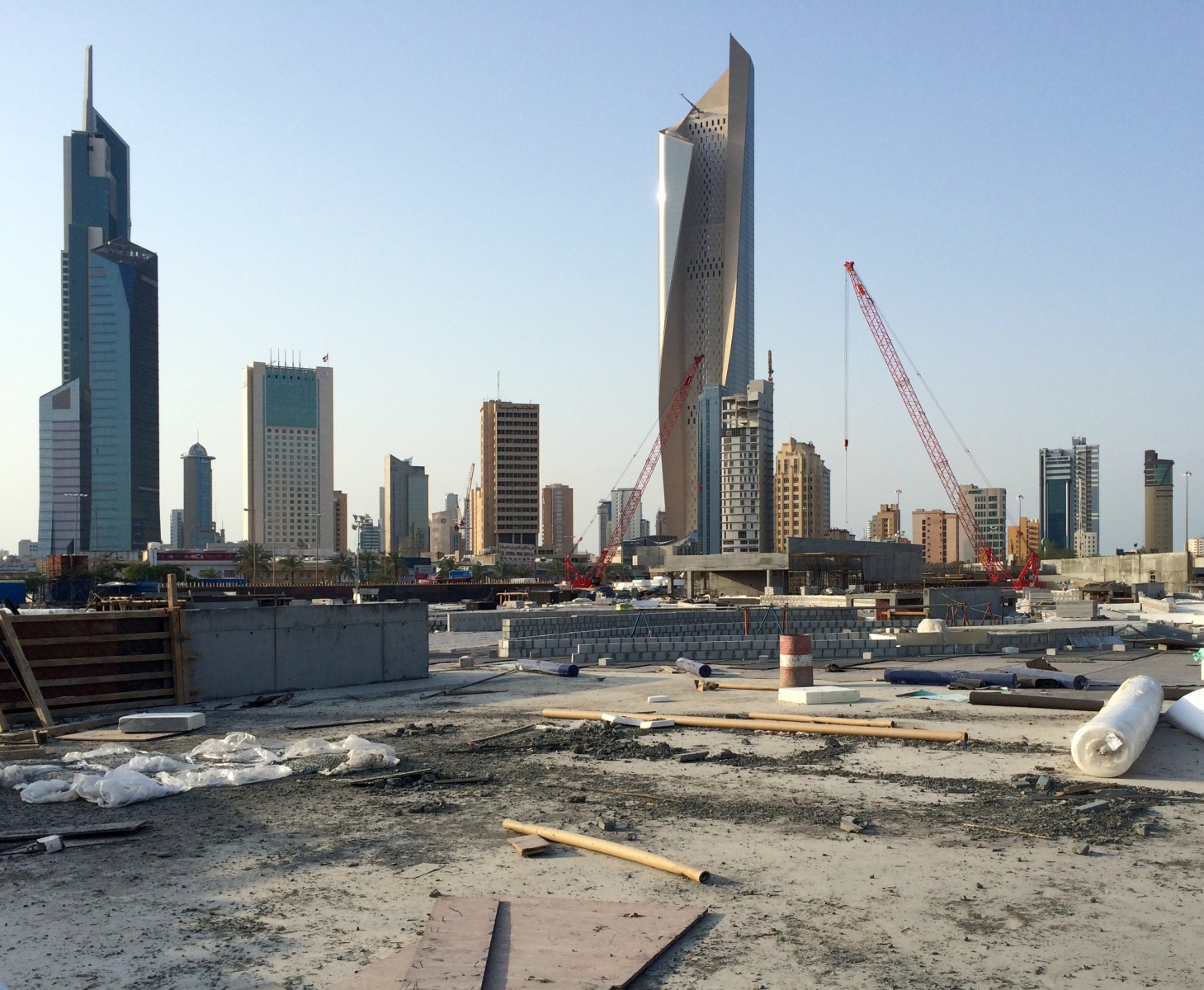 The Al Hamra Tower in Kuwait City was designed by SOM, one of the several major U.S. firms with extensive work overseas.

The project, then, lives on the strength of collaborators. One such collaborator was the Esto archives, who through Erica Stoller (Ezra’s daughter) granted the curators access to an invaluable image archive of the offices of American architectural firms. On perusing this images, the curators noted how in spite of all the technological and cultural changes that have affected the practice in the ensuing decades, the actual physicality of the architecture office has remained remarkably the same. As Schafer puts it: “We want to open that discussion, to why is it still how it was and what may it be in the future; how can it be different. We want to inspire the profession to re-consider that way it operates today and that  could have an effect in the practice.”