Architect Tom Kundig evokes the spirit of the San Juan Islands in a mechanized house that literally invites the outdoors in. 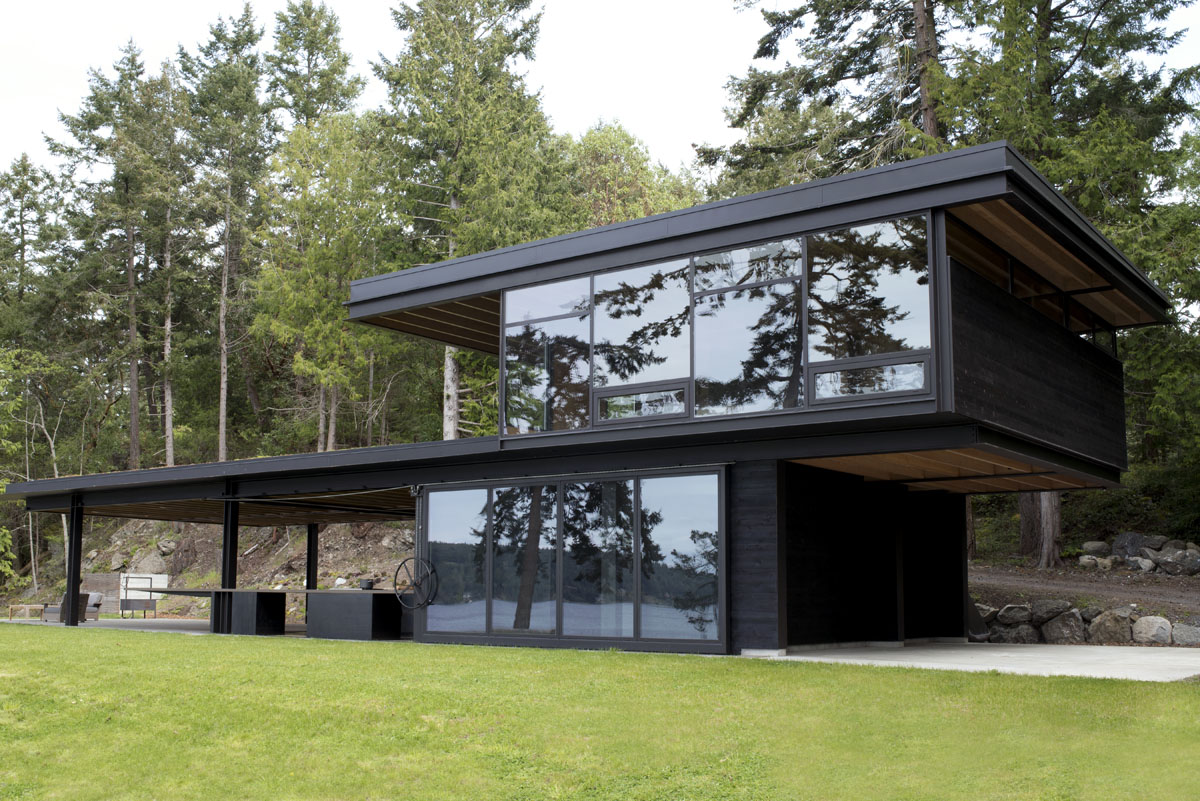 Designed for philanthropist Janet Ketcham, the Pole Pass Cabin sits at the edge of a waterfront site on the San Juan Islands archipelago, located at the northwest corner of the continental United States. Clad in charred cedar planks and outfitted with a black steel structure, the country retreat pulls from the dark hues of the island’s forest.

The problem with practicing architecture in the Pacific Northwest is the natural environment. It is so surpassingly beautiful that any building you introduce to this setting tends to diminish rather than enhance it. The greater the statement by the architect, the more egregious the blot on the landscape.

Seattle architect Tom Kundig, principal at Olson Kundig Architects, has a long track record of meeting this challenge ingeniously. Favoring unpainted wood, milled steel, green roofs, and massive glass panes, his buildings settle unobtrusively into their surroundings, receding into, rather than standing out from, the Northwest landscape.

So it is with the Pole Pass Cabin. Making your way through the San Juan Islands archipelago, in the picturesque waters north of Puget Sound, it can be hard to spot the house as you approach its Orcas Island setting. All muted colors and horizontal lines that match those of the shoreline and hill behind, the structure seems determined not to stand out.

This ambiguity belied a seemingly straightforward program. The home’s owner and Kundig’s client Janet Ketcham wanted to build a small, private getaway on her family’s property that could double as a gathering space. “Since he’s so creative,” Ketcham says of her architect, “I just gave him the specifics of what I wanted—only one bedroom, with the thought of a kitchen outdoors to entertain a lot of people.” Having visited several of his regionalist houses and noted their inventive details and fulsome embrace of the landscape, Ketcham felt that Kundig was uniquely qualified to provide the flexible, adaptable home she envisioned—one that could serve as a quiet redoubt for one or two people but that also could accommodate crowds. 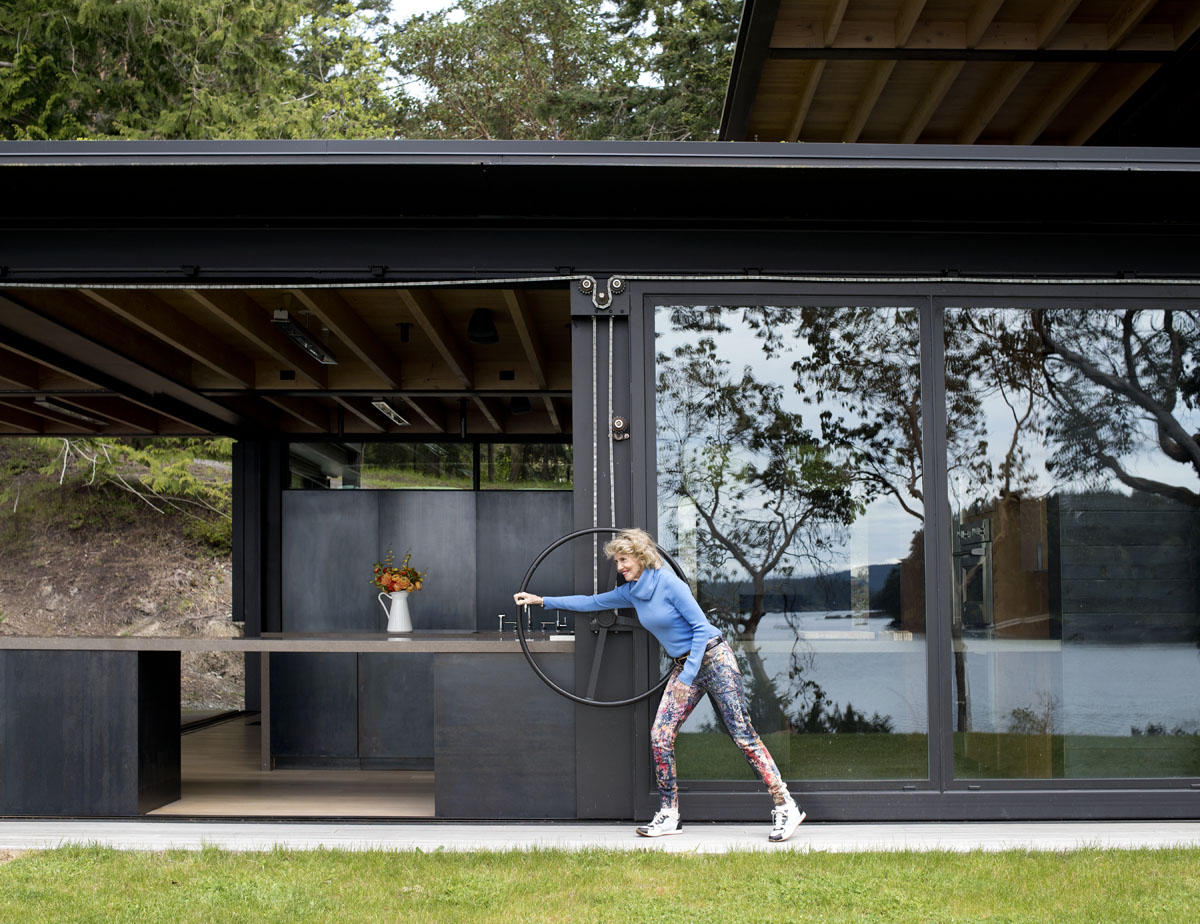 At the Pole Pass Cabin, the architecture is “mechanized” through the integration of a pulley system that can retract the kitchen facade with incredible ease. In a matter of minutes, the glazed wall (Cascadia Fiberglass) can be pulled back to open up the ground floor to the outdoor elements.

The house, a gift to Ketcham’s children and grandchildren, was to be more a place for hosting and entertaining than a permanent home. (It is a short boat ride away from the family’s main house.) To that end, Kundig designed a large ground floor with a glass-enclosed entryway, kitchen, and spacious, partially covered deck, or pavilion. Topping the latter is a small bedroom that overlooks a planted roof and enjoys a spectacular view of the waters and neighboring islands.

To further suit large gatherings, Kundig employed one of his trademark “gizmos”: a wheel-and-chain apparatus allowing one to effortlessly retract the adjoining glass wall on the south side of the large kitchen. By walking along the outside of the house while turning the wheel, one can convert the ground-level living spaces into an open pavilion with cooking facilities and a long, cantilevered counter approachable from both the shore and the “indoors.” With that turn of the wheel, the house sheds its first floor, so to speak; in its place is a fully furnished outdoor social space.

You can get away with this sort of thing in the Pacific Northwest, with its mild temperate and largely insect-free summer climate. Neither too cold nor too hot, it calls for structures that allow one to revel in nature rather than hole up inside. Since the roofline, which incorporates radiant-heat panels, extends over the kitchen deck, the house’s owners “can keep the walls open into the shoulder seasons,” Kundig says. “So you can sort of stretch the summer—stay ‘outdoors’ during the evenings and mornings when the weather is good but still a little cold.” 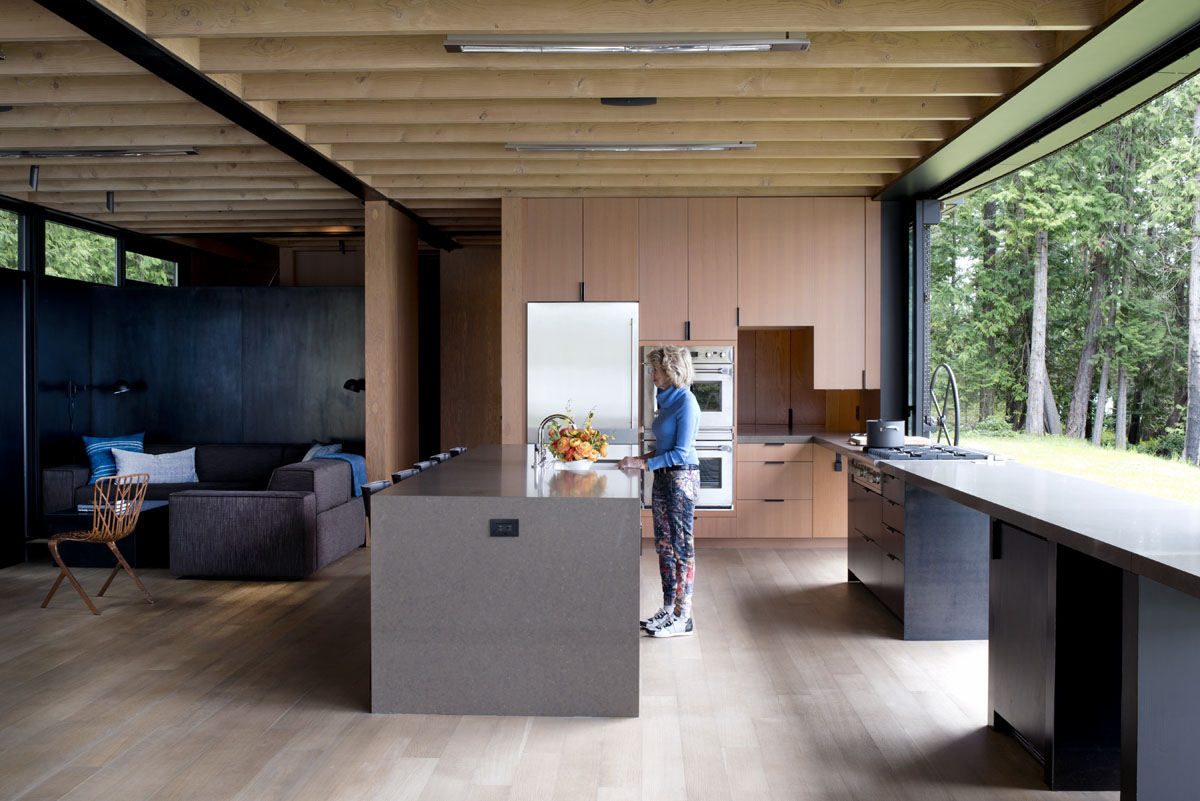 The tone of the architecture is casual, a “house that doesn’t want to be taken too seriously,” says Tom Kundig, principal of Olson Kundig Architects, who designed the luxe cabin. This attitude is reflected in details such as the wood flooring and weathered Ipe deck, whose stain was matched to the color of on-site sand and dirt found onsite—permitting the trekking in of both.

The idea for disappearing the large glazed walls with minimal physical force came to Kundig on a tour of a World War II–era airplane hangar in Renton, just south of Seattle. Inside the cavernous hull, he saw how easily the hangar’s massive doors could be moved using an enlarged version of the pulley device. “It’s a nice way of controlling everything,” Kundig says. “You’re not losing much through friction or inefficiencies. It’s not rocket science—but it’s sort of a science.” This kind of engineering affects a sort of minor miracle in the Pole Pass Cabin, making it effectively a casual abode for all seasons—one that provides shelter, an incomparable view on intemperate days, and an unobstructed immersion in the outdoors when the weather allows.

The engineering of the removable wall is such that Ketcham can open and close it by herself. “I’m in my 80s, and there’s no problem—no problem at all,” she says. “It’s really fun to have guests, and then open it for them, so that they get the whole effect. It’s fabulous because the house is right on the water.” She is also pleased to see that the house is being put to exactly the use she had envisaged. “When the whole family’s there, we can have 20 to 22 people on a regular Saturday night. And that’s every age, people from four years old to 84. It’s wonderful!”

The second-story bedroom, which occupies a small portion of the structure, looks out over the 54-by-24-foot green roof to the northwest—the roof is thus both a meadow and a buffer affording privacy—and to the sea waters and other San Juan Islands to the east. Furnished with a double bed and an additional double Murphy bed, it can comfortably sleep four people. 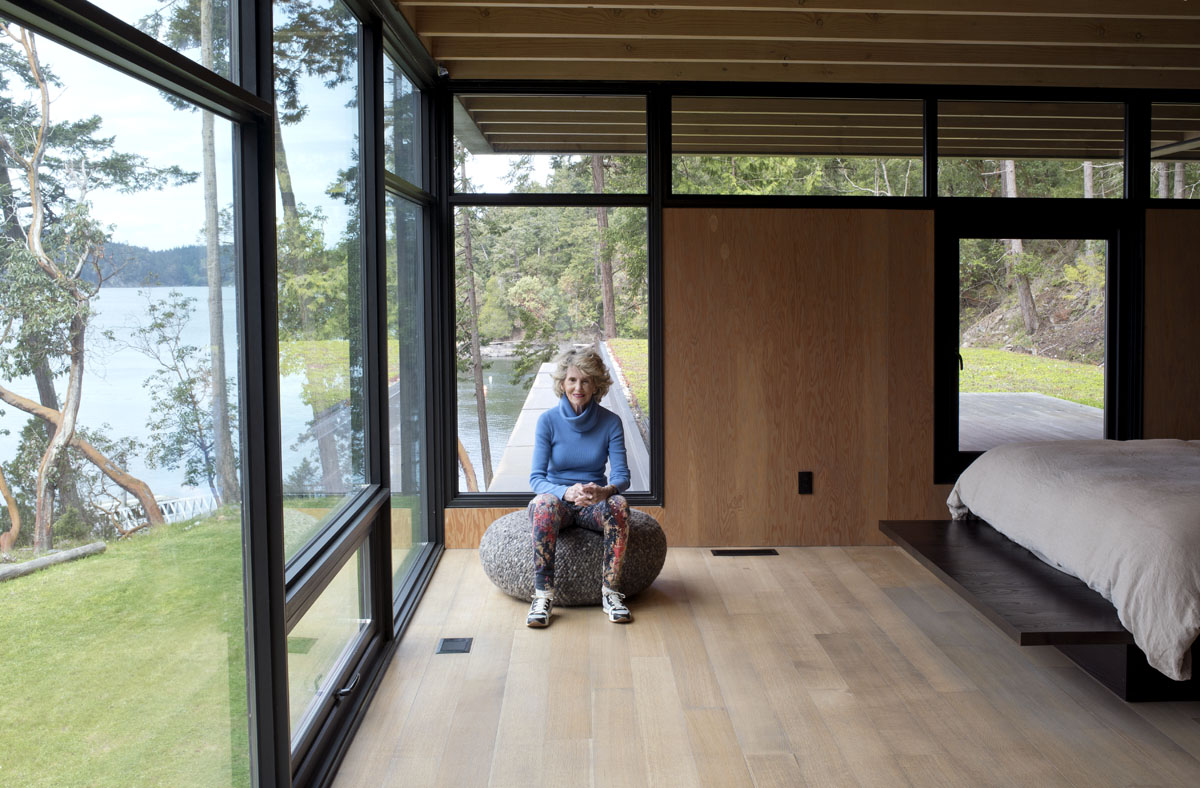 Another of Ketcham’s architectural projects is at the opposite end of the world—Afghanistan, a country she first visited in 1972. Through her philanthropic foundation—funded by the sale of a Lucien Freud painting she owned—Ketcham has helped finance the construction of two new schools there. The first, the Gohar Khaton Girls’ School, opened in June in Mazar-i- Sharif.

Throughout, the interior of the house is lined with Douglas fir plywood and mill-finished steel, which has found its way into several of Kundig’s recent projects. It brings the environment’s characteristic earthiness inside the house. On the exterior, cedar siding has been charred to a uniform, dark color using a Japanese technique called shou-sugi-ban, which doesn’t use any solvents or finishes, Kundig says. “It makes the wood fire-resistant and insect-resistant. And if you burn it at a certain temperature and certain depth, you’re going to get a uniform tone,” he adds. The darkening effect also helps, of course, to blend the building into its natural surroundings.

This camouflage operation is as much a signature Kundig touch as his fabled gizmo-engineering. Kundig homes can be found all over the Pacific Northwest, and while the details vary house by house, the effect tends to be the same. Made of cedar or other native woods left untreated by paints or solvents, and of steel left to rust and weather the elements, they take on the dark hues of a typical Northwest natural setting. Combined with large glass walls and windows, they approach near-invisibility as they age.

As Kundig tells it, the trick is simple, even if the effect isn’t always literal. “All you’re doing is hiding the coloring of the building, picking up the darker colors of the ground, and the bark of the trees,” he says. “It already is a landscape that is overwhelmingly beautiful—your eye is going to be focused on that.” 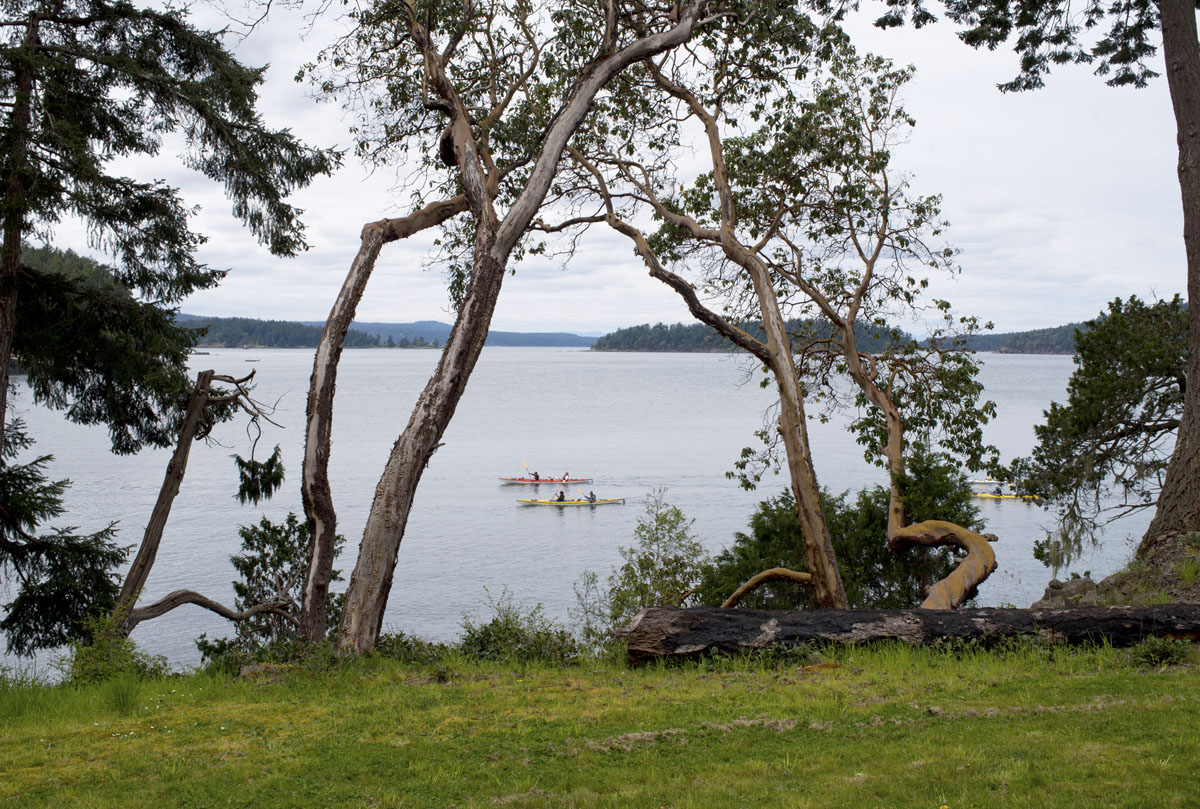