A Pair of Minimalist Hawaiian Houses, Built on Volcanic Ground 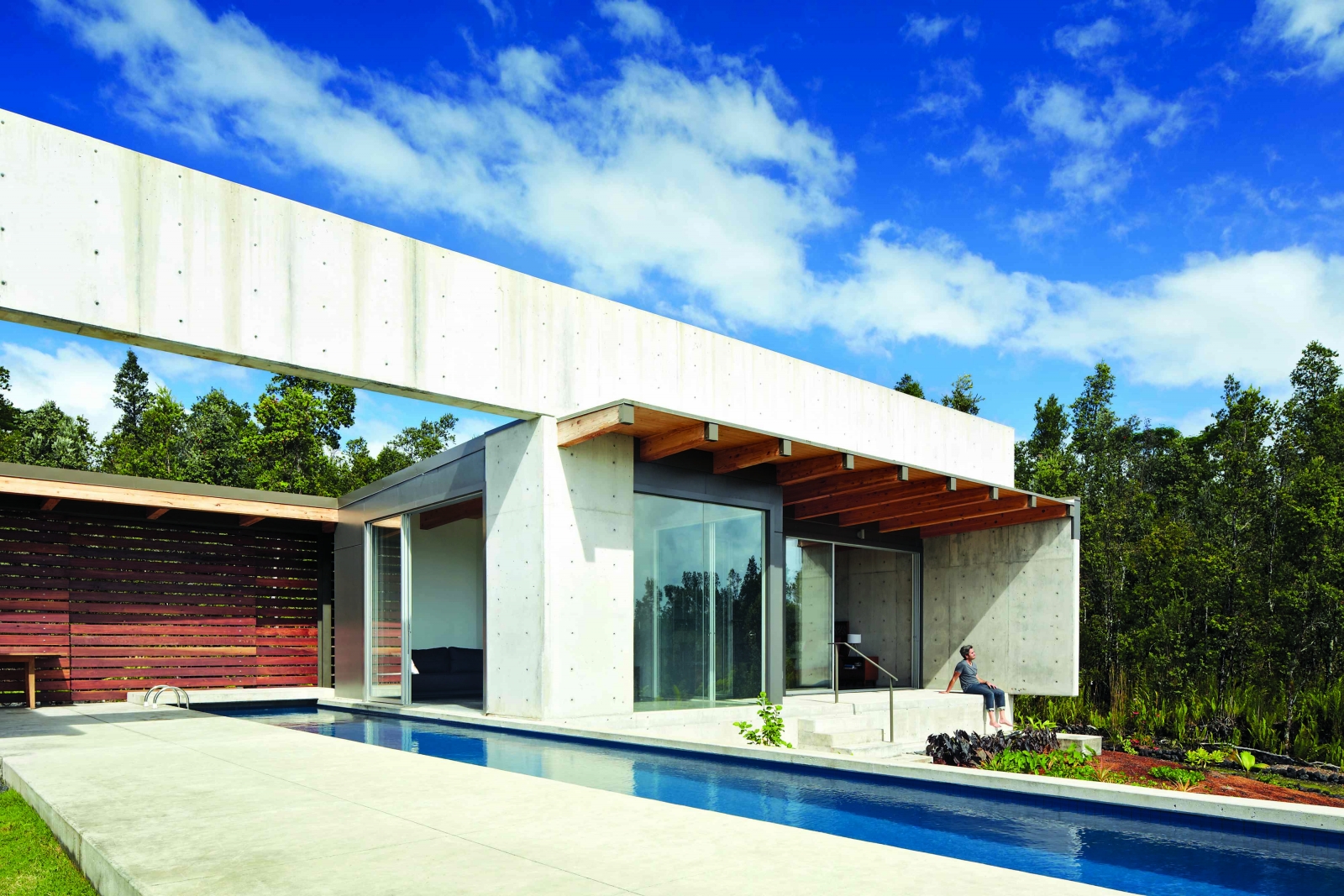 When Kilauea, the most active volcano on Hawaii’s Big Island, returned to life in early 1955, it flooded more than 3,900 acres on the southeastern seaboard with red-hot molten rock. The volcano has since continued to erupt regularly, creating new land surface and spewing sulfur into the air. For San Francisco–based architect Craig Steely, building a series of contemporary homes in this incendiary landscape has involved a steep learning curve. “It has become this process of thinking, ‘What’s an appropriate form of modern architecture for the tropics?’” he says of the seven Lavaflow houses he has designed so far. “Building near the ocean, with the volcano close by and the acid rain that comes from the volcano, adds another whole level of complication.”

Lavaflows 5 and 7, the latest homes to be completed in the series, represent the idea of “reductive architecture” that Steely has been developing in Hawaii since 1999—few materials, sparse construction, and linear plans that open up the homes to the surrounding land, sky, and water. 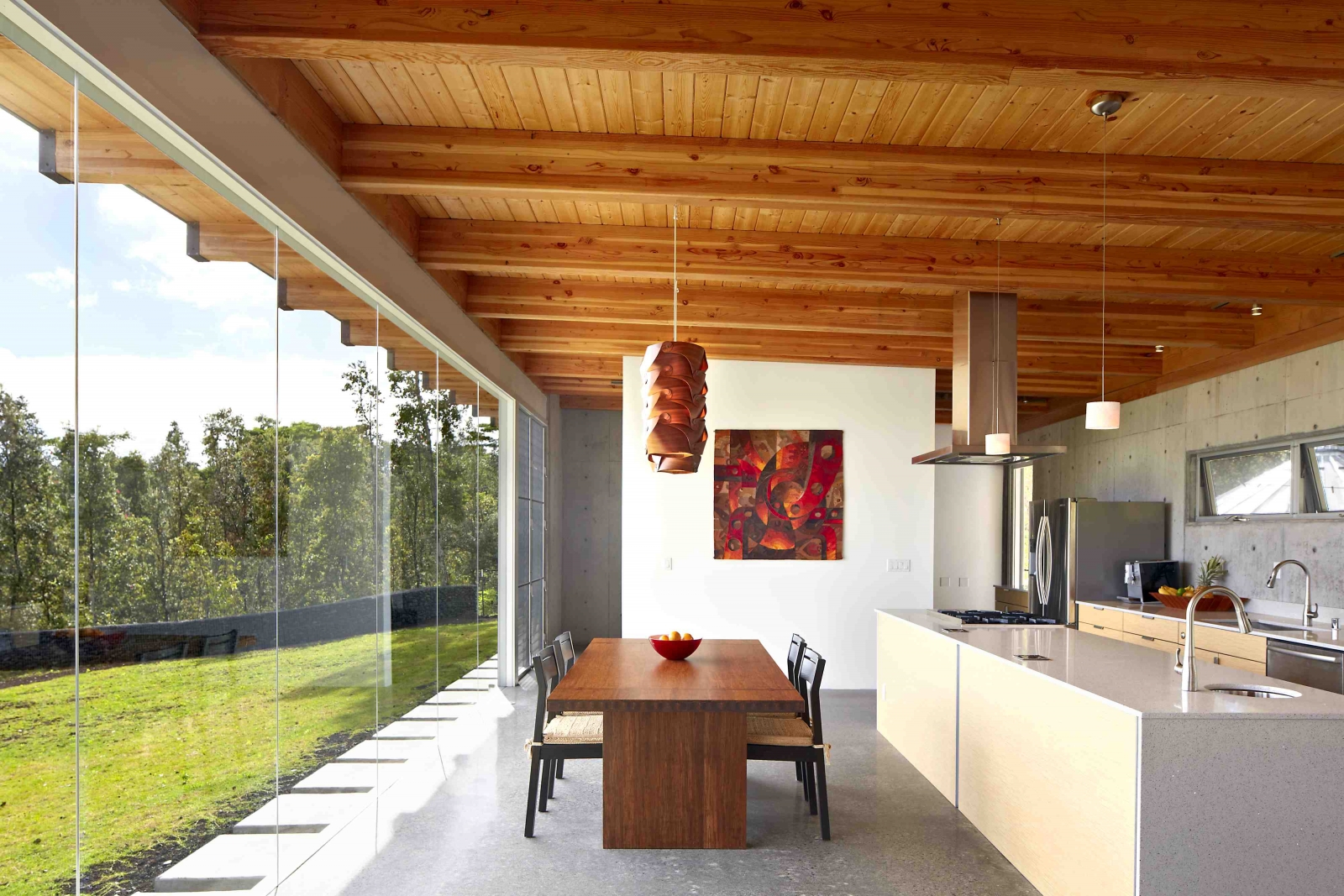 The open design provides views of the forest, sky, and coastline.

Because Lavaflow 5 is located on the eastern slope of the volcano Mauna Kea, north of Kilauea, it faced two issues: “There’s a real termite problem up there—wooden houses just get devoured. And it’s a lot more remote,” Steely says. The solution was a steel frame that could be prefabricated in San Francisco and installed on-site. With an extremely thin profile for the beams and columns, the delicate cage allows for expansive views of the ocean to the north and has an epoxy resin screen that diffuses the sunlight flooding in from the south. 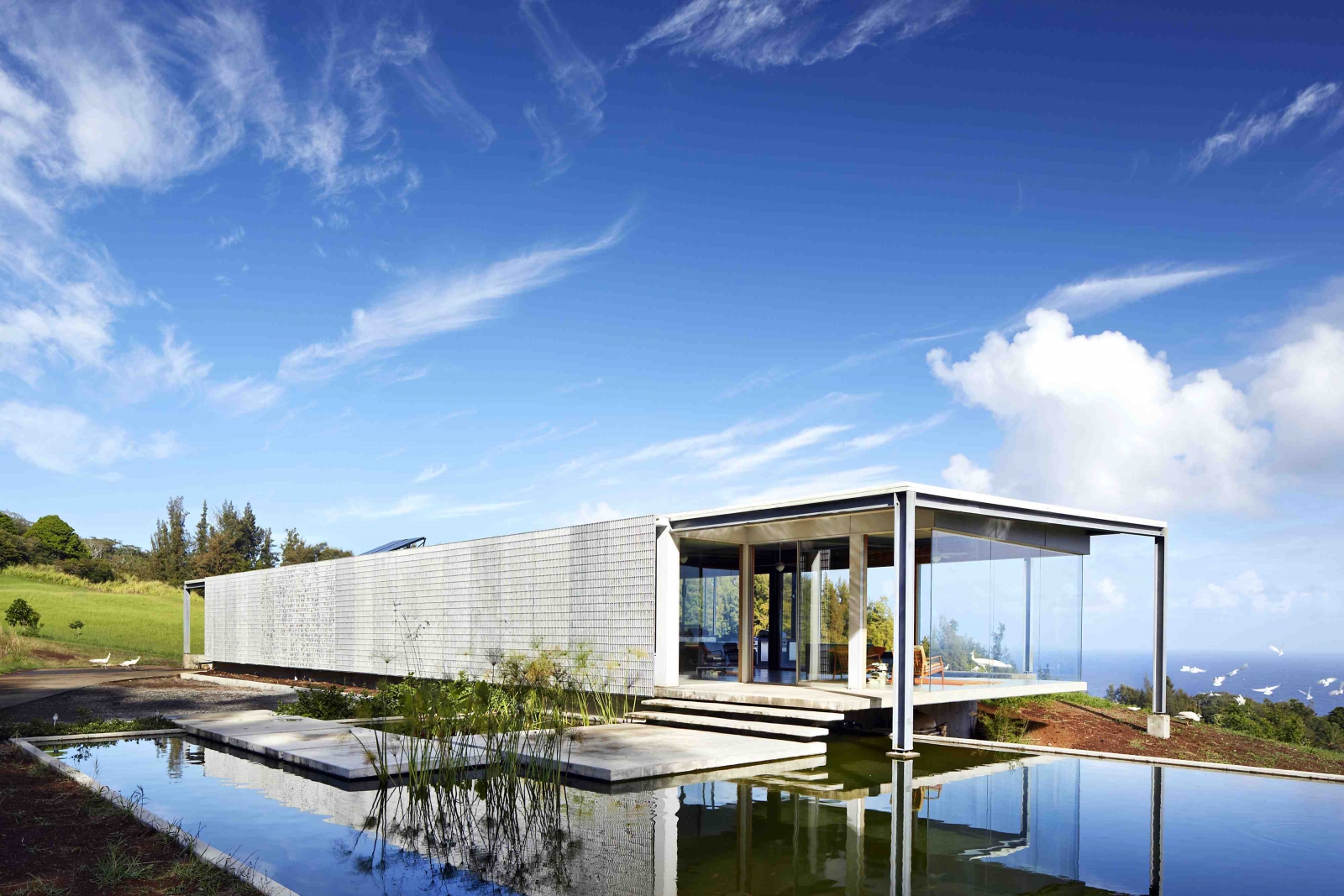 Lavaflow 5, which sits upon 30 acres of remote pasture, frames the sea and sky.

Steely uses this sort of structural simplicity to serve multiple purposes. Lavaflow 7 is set amidst five acres of Ohia trees, which were the first vegetation to grow on the land covered by the 1955 lava flow from Kilauea. “We removed the least amount of trees possible and built the house facing the ocean, facing the trade winds so the breezes catch it,” Steely says. The home itself is centered around a 140-foot-long concrete beam that runs the length of the building. “The point of doing that big concrete beam was to not have any walls dividing you from the Ohia,” he says.

The openness pays off in another way—energy bills. Both houses are long, thin, and oriented with respect to the ocean and the wind. “That length and the fact that every room is located along a spine makes it really easy to activate cross-ventilation and to cool off the entire place,” Steely says. This thought process recalls traditional wisdom about building on the island, while taking it to another level—the houses need no mechanical air conditioning, use solar power to heat water, and have rainwater catchment systems.

As Steely has discovered, this sort of architecture is not only appropriate to the environment, it is in keeping with the spirit of the Hawaiian islands. “The idea of aloha really exists. It’s that caring for people, for the land, and for each other,” he says. “Man, if you really want to understand a culture and a place, build a house there.” 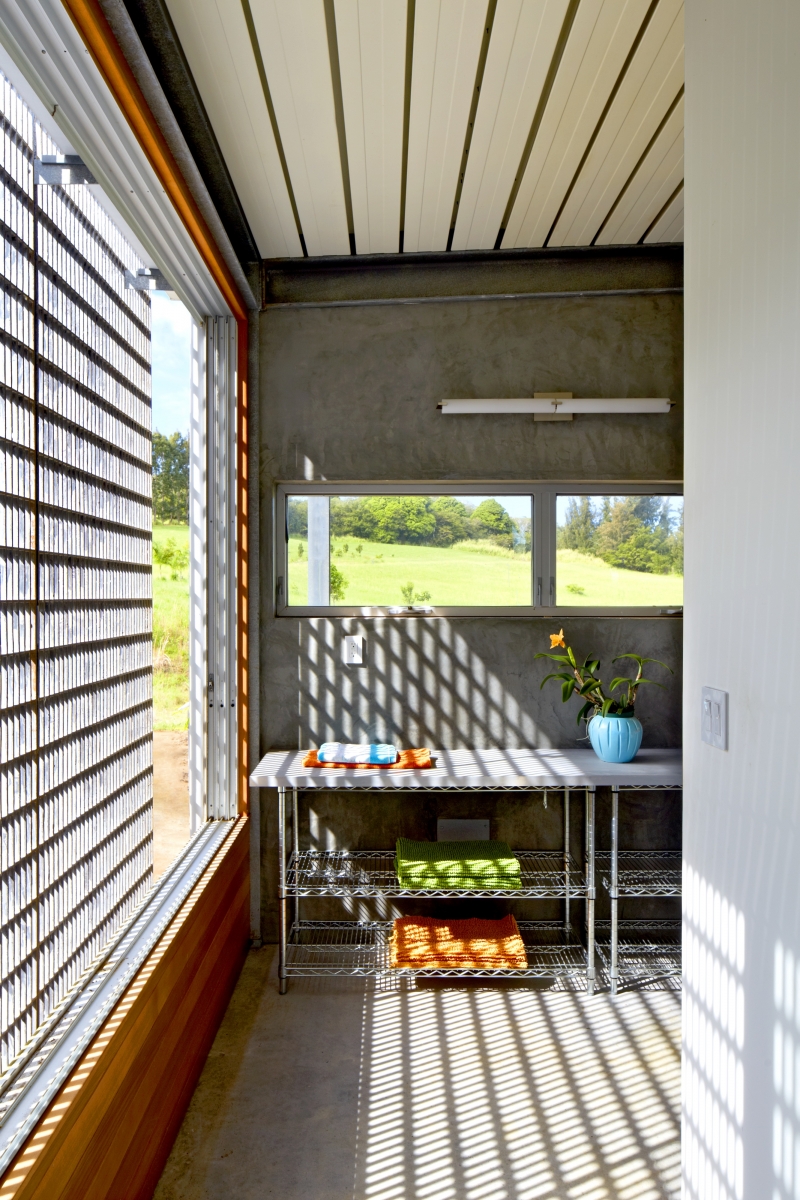 The steel frame supports surfaces of varying opacity: From nothing, to glass, to screen, to solid. 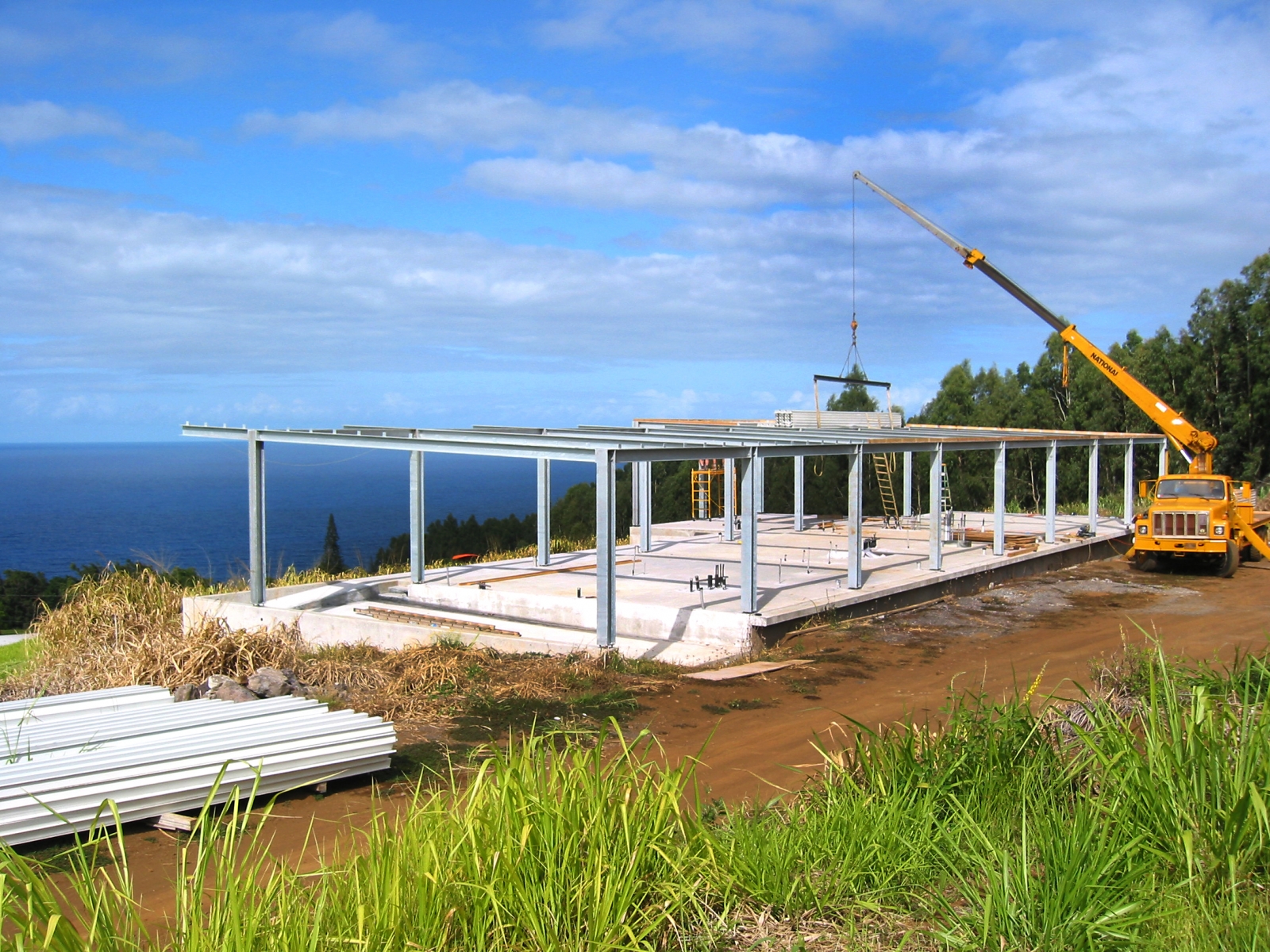