The design of the Molitor hotel pays homage to its rich legacy, after being an Art Deco icon, then a graffiti destination. 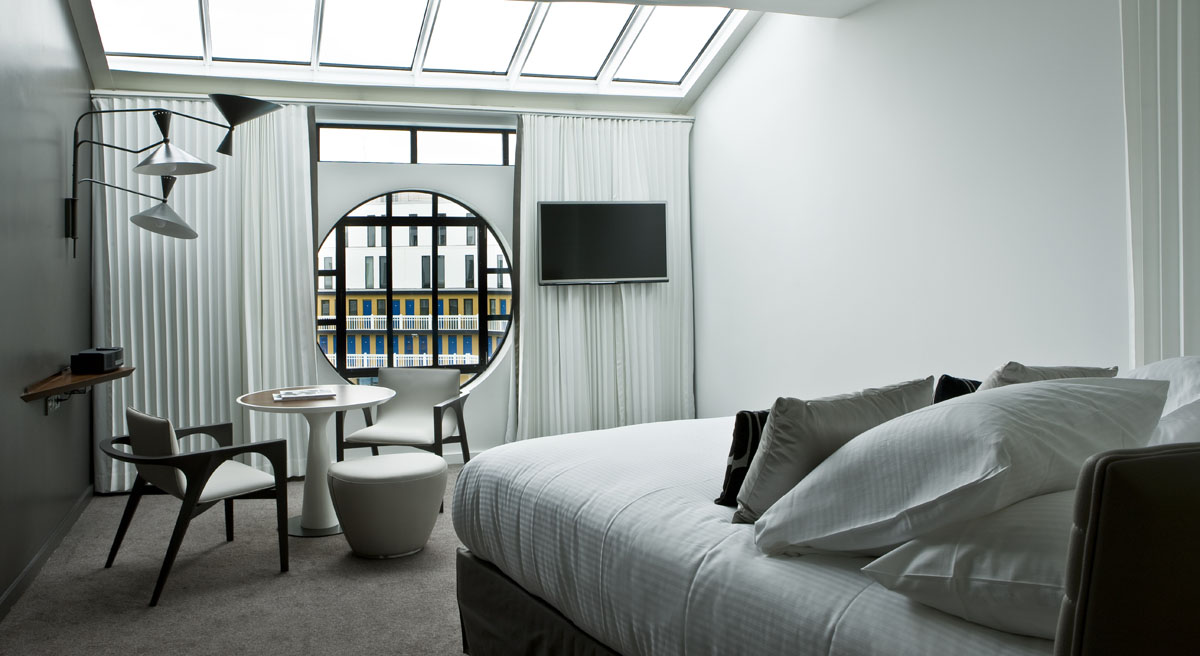 The monochrome bedrooms at the Molitor are meant to be a refuge. The chairs were specially designed for the hotel, evoking classic pieces from the 1940s, but with a contemporary edge.

If a swimming pool can be described as “legendary,” then the Molitor in Paris is simply epic. Built in 1929 as part of a push to fill the city’s green periphery with sporting and leisure complexes, its two lavish pools quickly became the place for aquatic hijinks. Johnny Weissmüller, the Olympic-swimmerturned- Hollywood-Tarzan, was a lifeguard there. In 1946, a clumsy two-piece dubbed the “bikini” was first shown to the public. Then in 1989, the lease for the Molitor expired, and its decaying concrete walls, tiered rows of bathing cubicles, and tiled pools took on another purpose—as a destination for graffiti artists and a decadent setting for underground raves.

“The concept for the Molitor was to merge both these periods and revive them,” explains Jean-Philippe Nuel, a French interior designer whose oeuvre shows a particular sensitivity for contemporizing historic buildings. During the last decade, preservationists saved the Molitor. It was then leased in 2007 to Colony Capital, an international real estate firm, with the intention of turning it into a luxury hotel and private club—a fact that has caused a frisson in some Parisian circles who would have preferred it to remain more accessible to the public. The only salvageable pieces were a handful of decorative elements and the pools: one indoor, another outdoor. The latter is the focal point of the Molitor, with rooms arranged over a surrounding three-story structure, whose form echoes the ocean-liner shape of the hotel’s original enclosing walls. Its entire facade is rendered in deep ochre yellow, raising the question: Why this rather astonishing color?

“It was found in various scrapings of paint lying around the site,” answers Nuel. “And after some investigation, it was decided that it was the original color of the building. It was a vital piece of information for me, as I needed to incorporate the color into the interior decor. But that’s the thing with working with historic buildings; they lead you to unexpected places.” 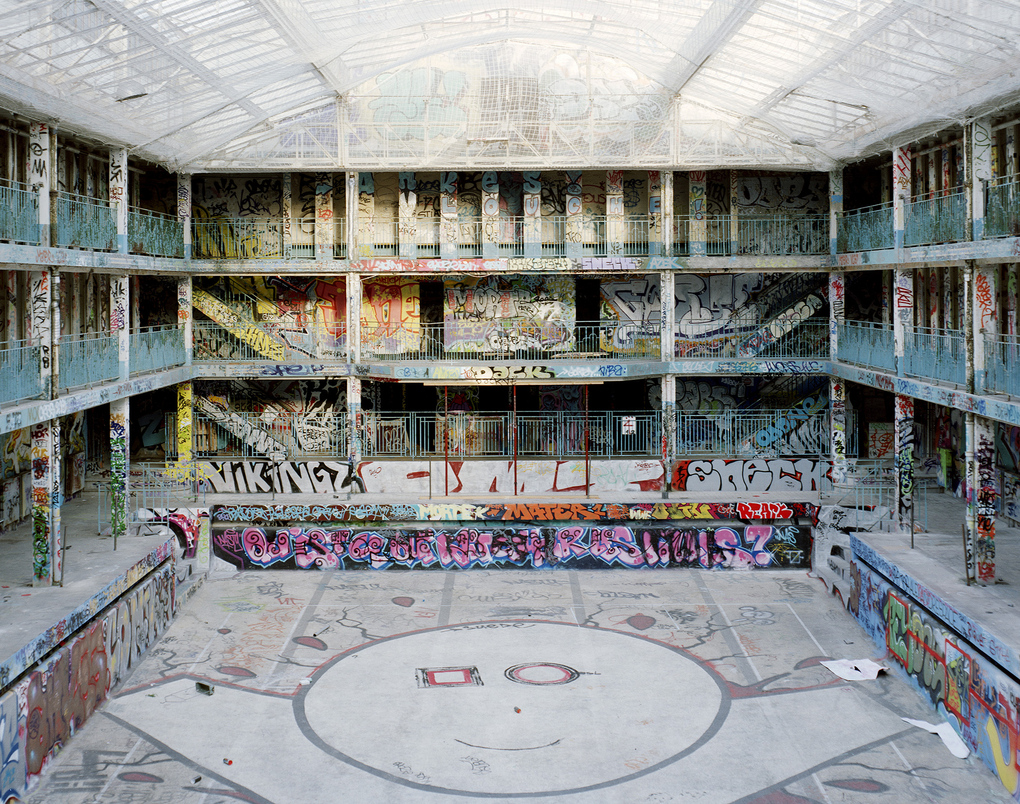 When the hotel was closed in 1989, the site was abandoned and became a have for street art. 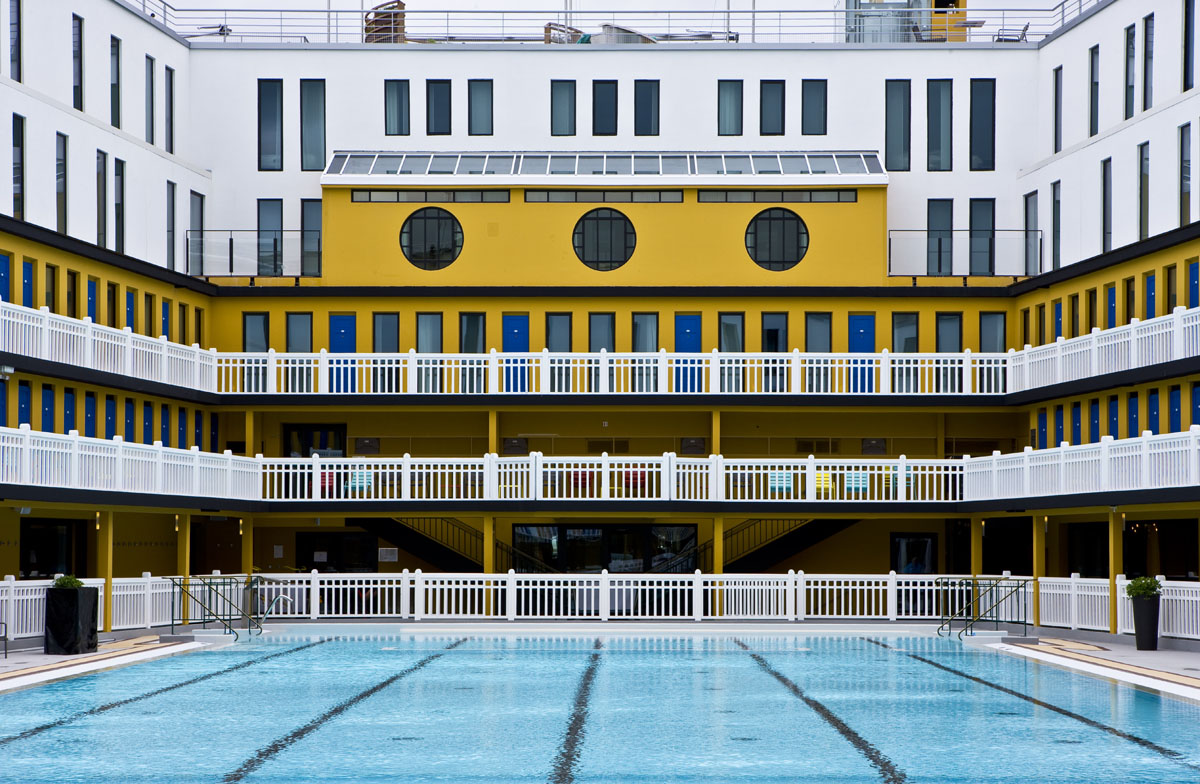 After being shuttered for 25 years and cloaked in graffiti, the Winter Pool at Paris’s once-famous Molitor hotel has come back to life.

Nuel’s task of referencing two vastly different styles—the sleek chic of prewar Modernism and the colorful frenzy of rave and graffiti culture—under the one roof can’t have been easy. Rather than create a mishmash, he composed a series of ambiences where one or the other dominates, creating a sense of union and narrative.

The first thing his team did was extensively photograph the street-art-blanketed structure—fragments of which were then transferred to large decorative panels and carpets that adorn the meeting and dining areas. Then he hit the city’s flea markets, letting his finds dictate the hotel’s eclectic mise-en-scène: an Art Deco side table suspended mid-wall, period posters and mirrors, and glass-tile-embedded floor panels (repurposed as room dividers in the club lounge) salvaged from the closed-down La Samaritaine department store, to name a few. The 124 rooms, all of which look out onto the Summer Pool, are less showy because, according to Nuel, “The memory of the place isn’t relevant here” (none of these items existed before the rebuild). Instead they breathe a five-star classicism in white, mushroom, and swathes of natural textiles.

The dark-wood-and-chrome scheme of the bathrooms is in keeping with the hotel’s Art Deco heritage.

Given the building’s history and the demands of the program, the Molitor could have trod into the thematic terrain. While it’s a little disappointing to discover that those perfectly reproduced bathing-cabin doors shelter nothing more than a concrete wall, the work of Nuel does feel like a genuine labor of love, filled with respect for the Molitor’s urban history and cultural significance—albeit re-created for the benefit of a luxury-minded clientele for whom that may not be important.