Paris’s Les Bains Is Reborn as a Boutique Hotel

Once a haunt for hedonists, Paris’s Les Bains gets the boutique hotel treatment. 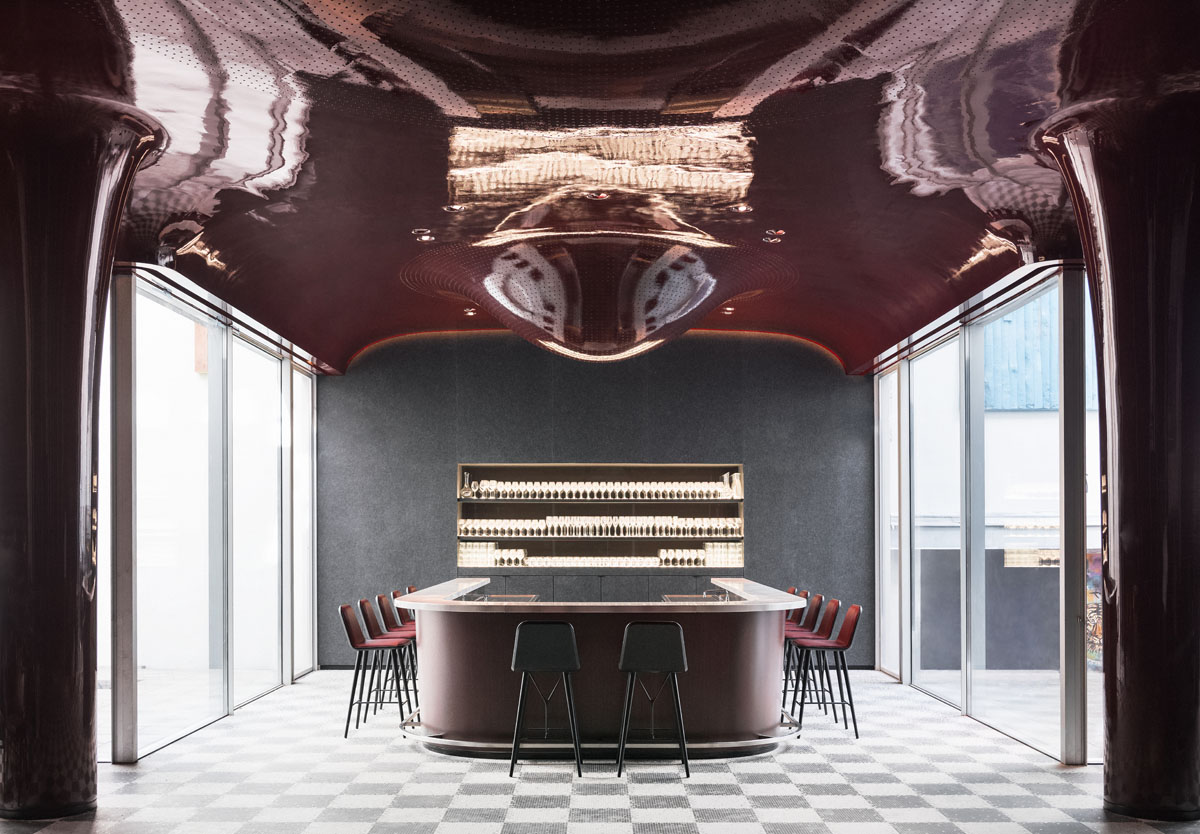 The new bar at the boutique hotel Les Bains, which was opened in Paris in April by hotelier Jean-Pierre Marois. Formerly a nightclub designed by Philippe Starck in the 1980s, Les Bains (which is a member of Design Hotels) is a thoughtful take on the typology.

The streets of Paris are richly fabled, but the labyrinthine rues of the Marais are especially laden with history. Stroll down the diminutive Rue du Bourg-l’Abbé, for example, and you’ll encounter an architectural resident with a rather colorful past.

It was originally built in 1885 as Les Bains Guerbois, a private thermal bath house founded by François Auguste Guerbois—who also owned the bohemian mecca Café Guerbois in Montmartre, beloved by Édouard Manet and Émile Zola. That clientele soon began to also frequent the baths, including Marcel Proust, who enjoyed regular steam sessions alongside local workers from the nearby Les Halles.

In 1978, the ailing building was resurrected as the nightclub Les Bains Douches, which, designed by a relatively unknown Philippe Starck, became a playground to glitterati including Yves Saint-Laurent and Catherine Deneuve. The club closed in 2010, after which the tattered property briefly functioned as a temporary artist space. In 2014, construction began on the 39-room boutique hotel Les Bains, which opened in April.

In a city where new buildings aren’t always welcomed into the urban fabric, boutique hotels in old buildings are relatively common, but they aren’t always done well. While Hotel Molitor opened to fanfare last year, many argue it lacks the soul of the original edifice that housed the iconic Piscine Molitor. Owner Jean-Pierre Marois’s vision for Les Bains was equally precarious—a hotel that seamlessly referenced the building’s varied incarnations, without falling victim to gimmick—and he enlisted the star lineup of architect Vincent Bastie and interior designers Denis Montel and Tristan Auer for the task. 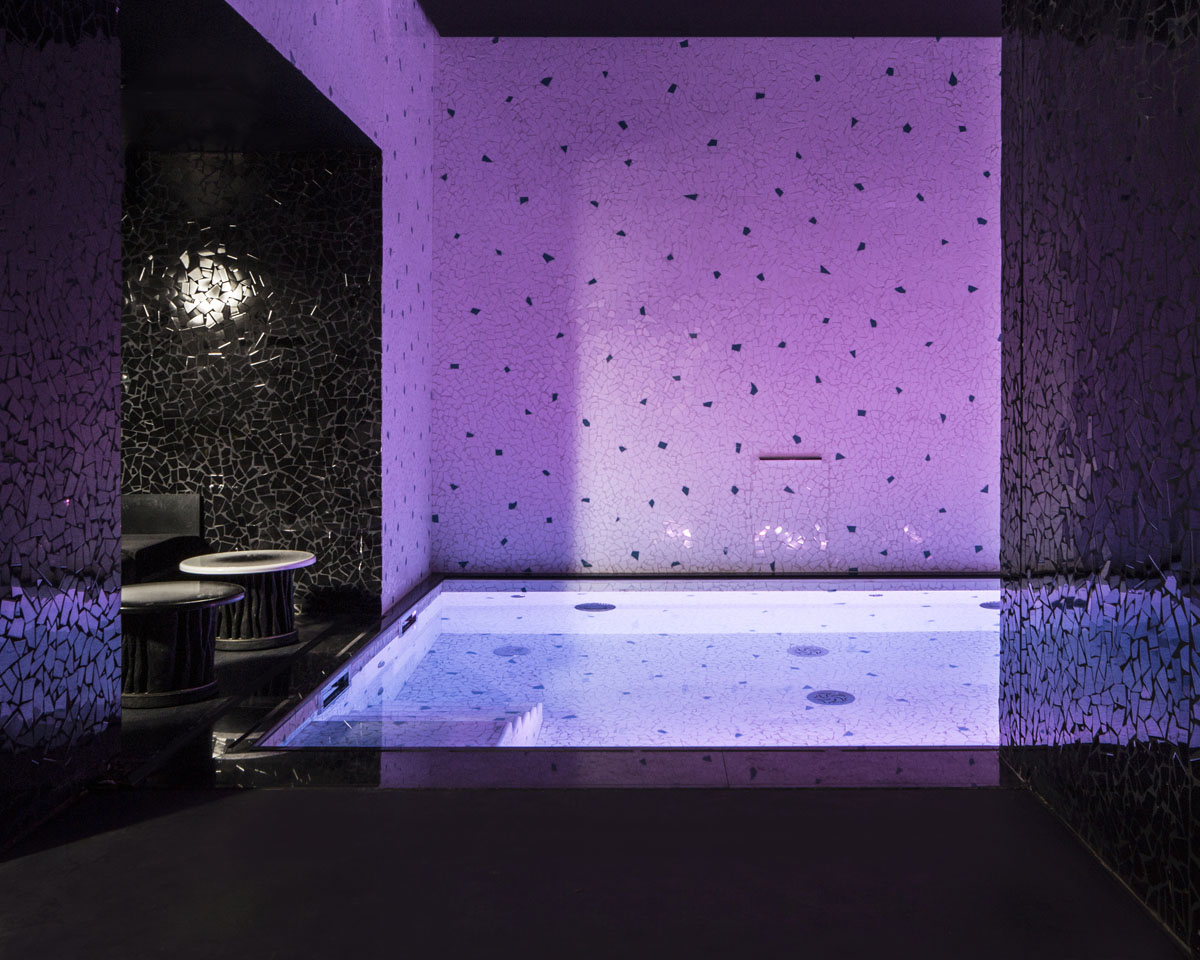 The pool in the nightclub downstairs sports black-and-white tiling that reinterprets Starck’s original.

In spite of the design pedigree, it’s hard not to expect the odd aesthetic stumble when hearing the hotel’s concept. Yet, most aspects of Les Bains exist in relative harmony. There are nods to the original baths throughout the rooms, including complimentary loofahs, personal hammams in the suites, marble bedheads, and brushed-concrete textures. The most notable design thread, however, stems from Starck’s iconic black-and-white checkered dancefloor, crafted from kitchen tiles (a cost-saving measure for the then-fledgling designer). This tile fixation begins in the lobby, where ornamental Art Nouveau patterns are given a pixelated update; the motif morphs a second time in the restaurant-bar, where it finally becomes the famous checkerboard. Upstairs in the rooms, Starck’s tiles make an unexpected appearance, embellishing that usual eyesore, the mini-bar fridge.

In the hotel’s basement, a smaller but faithful replica of the original nightclub—with the notorious swimming pool just off the dancefloor—opened in June. It’s a fitting tribute to the building’s hedonist past that doesn’t encroach on the hotel’s generally understated elegance, as the club’s subterranean existence allows adequate separation between revelling and rest. There are other subtle references to the disco era—artworks by Futura and Basquiat are among the hotel’s rotating collection curated by gallerist Jérôme Pauchant. The baroque hallway carpet replicates that found in Serge Gainsbourg’s apartment at Rue de Verneuil. And in several rooms, Auer’s cartoonish copy of Andy Warhol’s famous sofa from The Factory takes prominence among the other bespoke furniture. 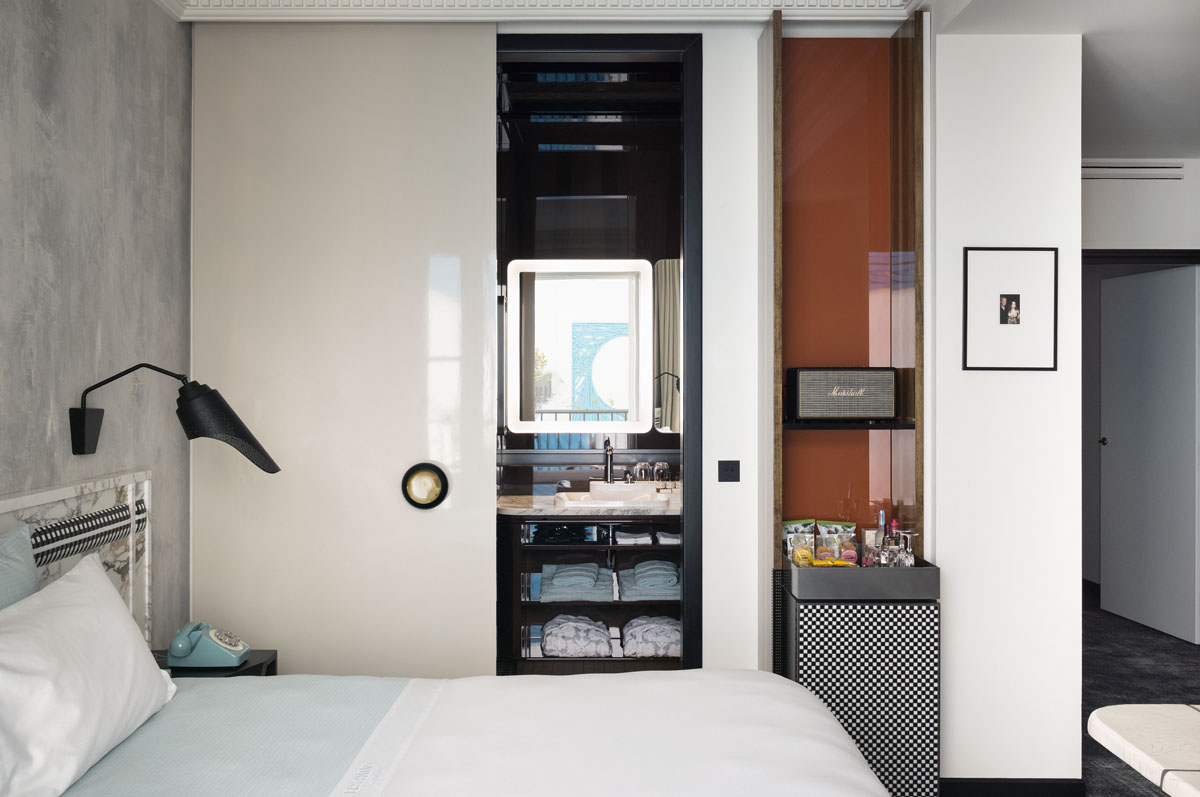 One of the hotel’s 39 rooms, most of which have a balcony. Other attentive particulars include Bluetooth Marshall speakers, an ample supply of Le Labo toiletries, and a collection of books—curated by Marois—from art, film, and photography tomes to the iconic Éditions Gallimard.

Outside, carved into the stone above the looming arch of the entrance, a likeness of the god Bacchus keeps a somber watch over all those who enter. His visage carries over into the graphic identity of Les Bains, but, for a hotel that manages to expertly navigate the line of subtlety, its branding is cloyingly overt. While hotel-branded stationery and towels are expected accouterments, slipping into patently emblazoned bed sheets feels a little cheap, as do the signature Les Bains energy drinks in the mini bar.

Fortunately, that minor aesthetic oversight is one of the only areas where Les Bains falters. Granted, there is the hackneyed intention of “creating a home away from home,” commonly uttered among the Les Bains staff. But where other hotels make superficial attempts to fulfill such promises, Les Bains achieves it in smaller, less obvious details. Many rooms feature a separate foyer-like entry (with coat racks) that can be completely closed off by a door. And for guests who like to actually spend time in their room, there’s the thoughtful (yet often forgotten) addition of an armchair, corner banquette, or sofa, keeping the bed for the activities for which it is traditionally intended.

These incentives to linger at Les Bains are all part of Marois’s well-executed plan, which, overall, manages to inject a newfound creativity to the well-worn boutique hotel concept. “Traveling to a new city can be very inspiring, but sometimes going back to the hotel each night is the low point of your trip,” he says. “So when you’re lucky enough to have found a great hotel in which you can continue a very inspiring experience, it makes your whole trip magical.” 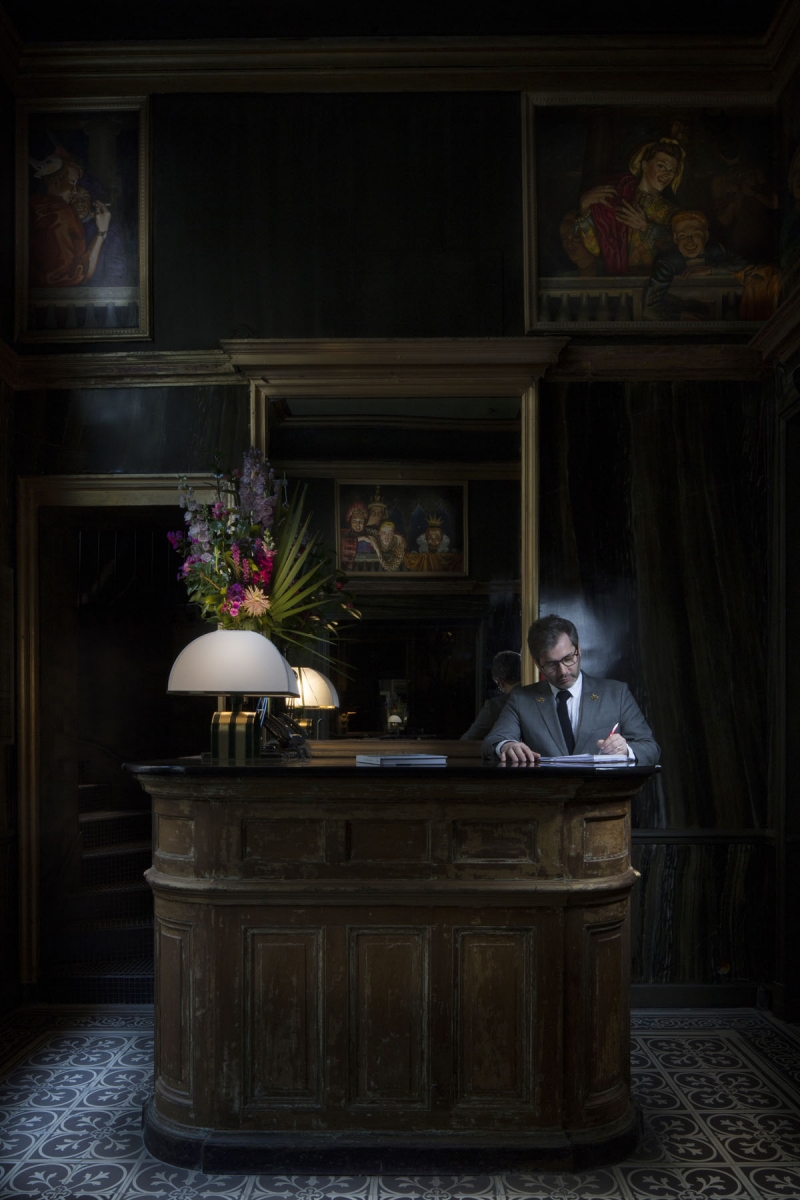 The reception desk at Les Bains captures the aura of the historical property.