Perennial Champions Sustainability in Its Menu and Design 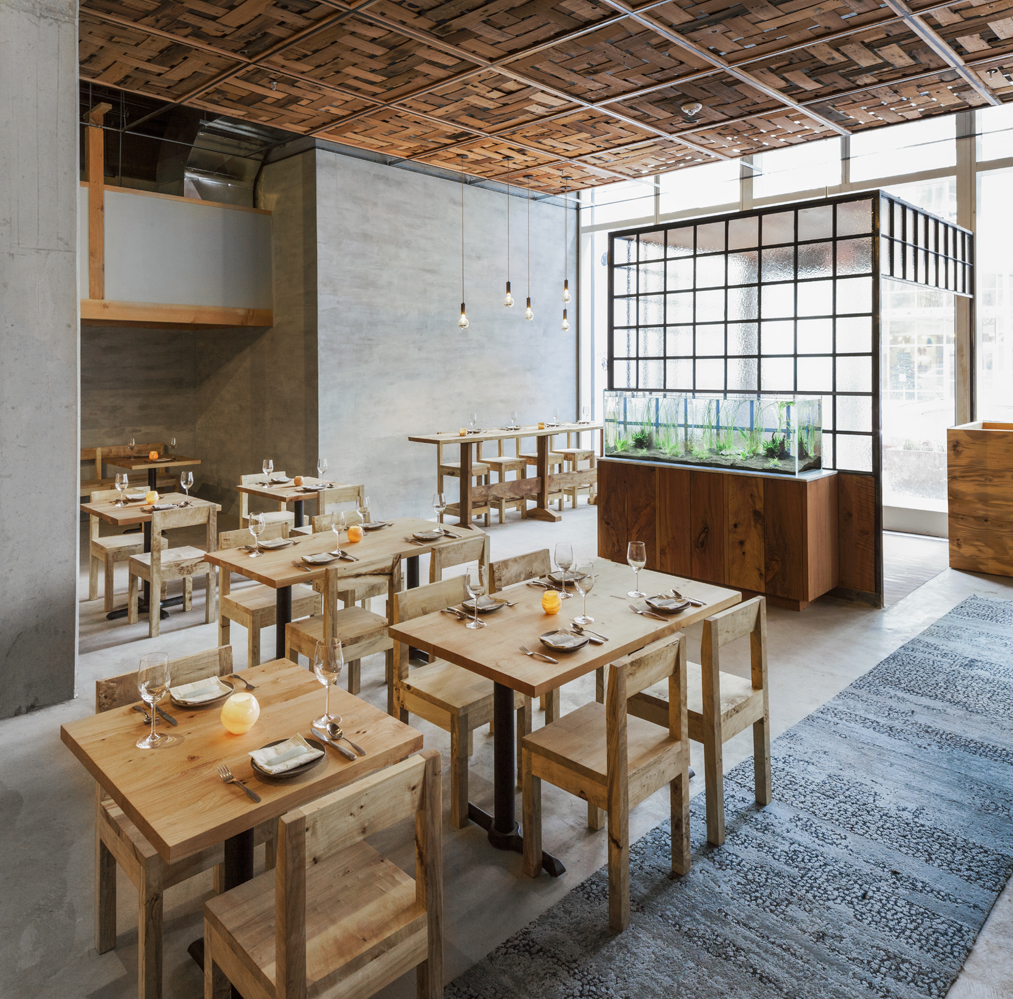 The restaurant’s moniker is inspired by perennial plants, which not only require significantly less carbon for their upkeep, but also assist in preventing soil erosion and drought.

When you have someone’s future to think about other than your own, the world begins to look a little different. After having their first child in 2012, Karen Leibowitz and Anthony Myint—who have been well entrenched in the San Francisco restaurant industry for the better part of a decade—began to consider the environmental ramifications of their métier. Having successfully helmed the renowned Mission Chinese Food and its neighboring restaurant Commonwealth, the twosome wondered if they could create a fine-dining restaurant that not only had a significantly reduced environmental impact, but that actually helped fight climate change.

With the help of Chris Ying, editor in chief of Lucky Peach (for which Leibowitz is a contributor), and climate-change expert Peter Freed, they set about analyzing the ways restaurants impact the environment and how that could be reduced and offset. The study not only resulted in the founding of the nonprofit ZeroFoodprint—which aims to help restaurants be part of the climate change solution—but also gave Myint and Leibowitz the basis for their newest venture, the Perennial.

“We wondered: If you were starting a restaurant from scratch instead of trying to retrofit from an existing restaurant, what would you do?” says Leibowitz. Serendipitously, she and Myint had been approached about starting a new restaurant in San Francisco, presenting a ripe opportunity. “We thought it could be a kind of test case to try what would we do if the environment were at the forefront of our mind.”

After an intense two years of research and construction, the pair welcomed the first diners to the Perennial in January this year. Rather than echoing the farm-to-table ethos that has recently become so ubiquitous, the restaurant is founded on the philosophy of “progressive agrarian cuisine”—the idea that agriculture has the potential to reverse climate change, and that food and drink can be part of that. 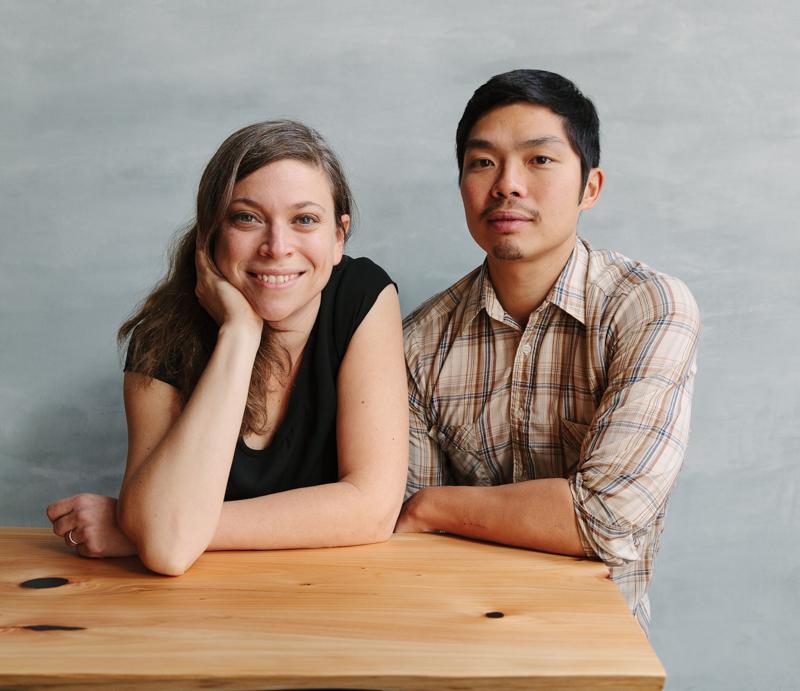 Aquaponic farming—a process in which plants send their roots down into water fertilized by fish—plays a big part in the Perennial’s food production, with a tank in the restaurant itself and a 2,000-square-foot aquaponic greenhouse off-site due for completion in the coming months. Taking the process full circle, kitchen scraps from the restaurant will be taken to the greenhouse to feed worms and soldier fly larvae that will then be dehydrated into food for sturgeons and catfish. Those fish will not only help fertilize the growth of a portion of the restaurant’s produce, but will also feature on the menu themselves.

In general, meat at the Perennial is considered more an accompaniment than a centerpiece, served in smaller portions. Cuts are sourced from the nearby Stemple Creek Ranch, which uses a practice known as carbon farming that significantly reduces the greenhouse gas emissions associated with meat production.

While the details of the Perennial’s sustainable practices are playfully depicted on postcards on show at the restaurant, staff are conscious not to preach their establishment’s altruistic ethos, instead letting customers ask questions if they want to know more. Leibowitz and Myint also sought to avoid clichés in the establishment’s design. “We definitely didn’t want it to look like a country farmhouse,” Leibowitz says. Instead they turned to the talents of local woodworker, architect, and Zen Buddhist monk Paul Discoe, who works exclusively with reclaimed lumber. Along with already crafting the restaurant’s Douglas fir bar, poplar chairs, and cypress and black acacia tables, Discoe will house the aquaponics greenhouse on his land. His woodwork is complemented by products from a range of suppliers who share the Perennial’s vision for a more planet-friendly future. Among them are the Interface rug in the dining room, made from 100 percent recycled fibers, and the energy-efficient LED lighting system from Anna Kondolf Lighting Design and Neidhardt, which lends the space an intimate glow.

As with any new restaurant, there are still kinks to be massaged and costs to reduce, but already the Perennial team feels a sense of satisfaction. “I’m really proud of the balance we have achieved between restaurant standards and environmental ambitions,” Leibowitz says. “We’ve communicated our message without sacrificing the customer’s enjoyment, and really achieved our goal of making sustainability pleasurable.” 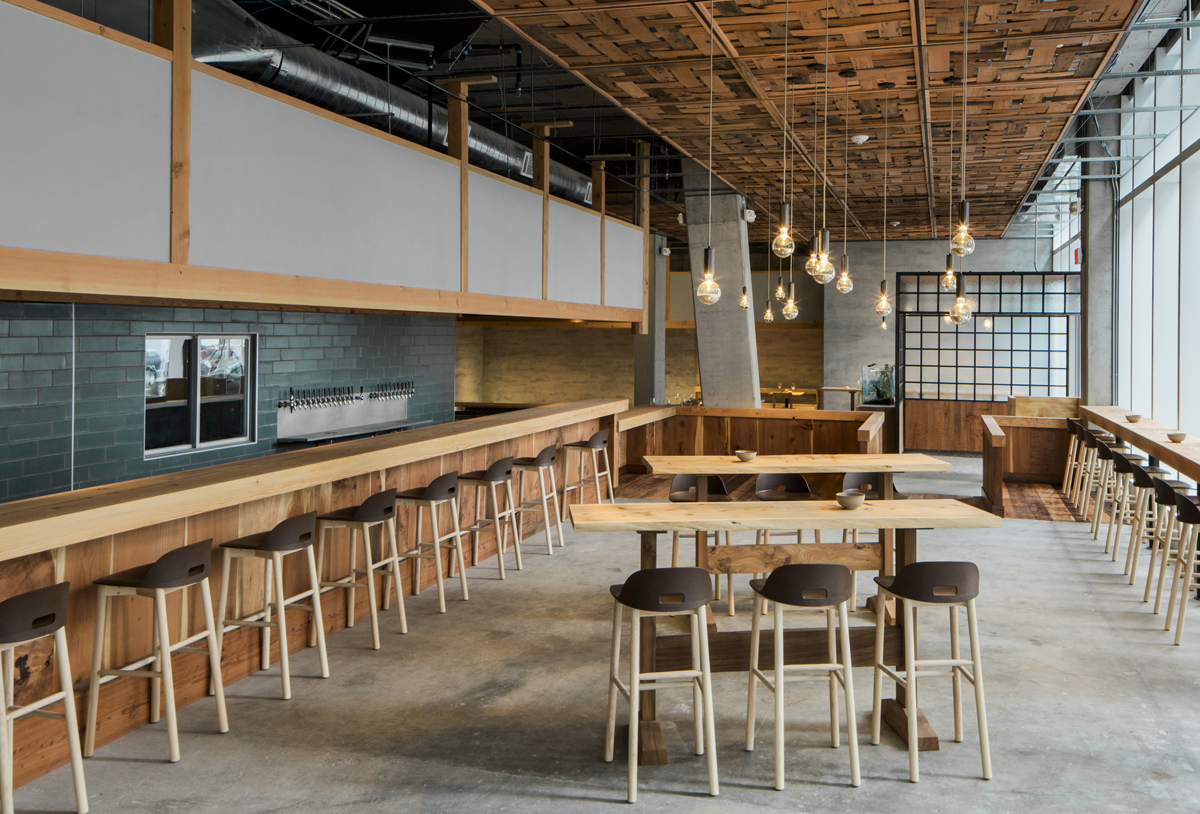 Locally produced Fireclay tiles, which adorn the bar, kitchen, and bathrooms, are made from 100 percent recycled materials, as are the Emeco Alfi stools and chairs in the bar and private dining room. 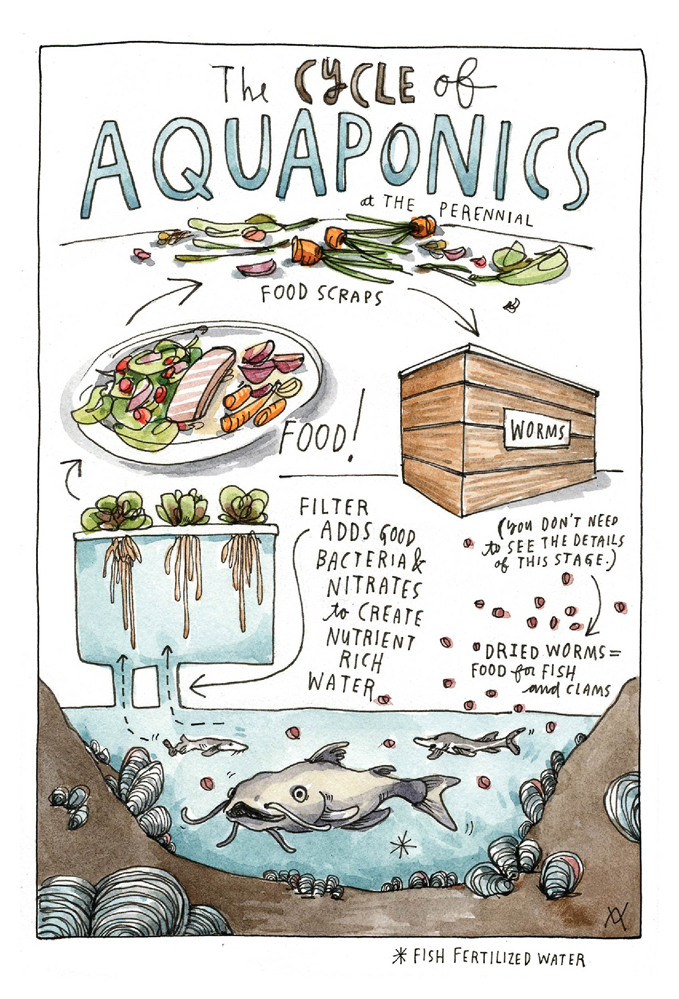 One of the postcards by illustrator Wendy MacNaughton depicting the Perennial’s sustainable process.

Courtesy Wendy MacNaughton for the Perennial 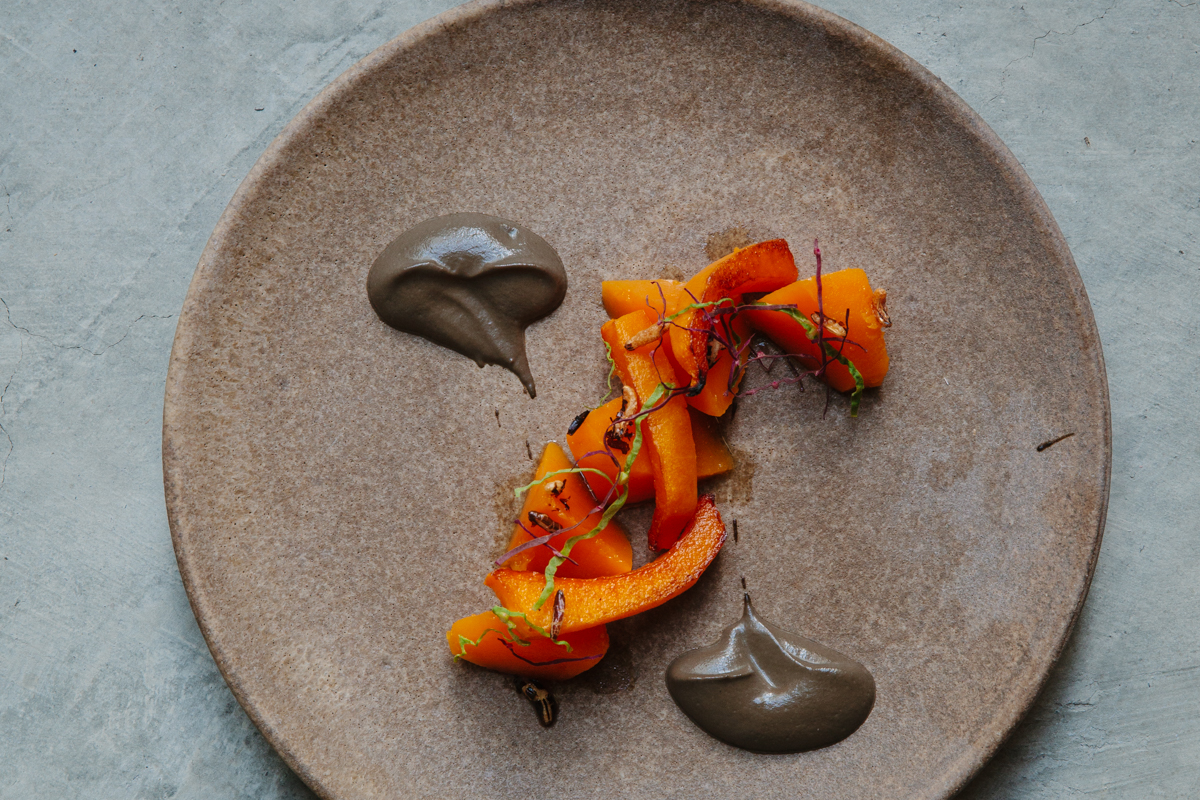 Roasted squash is one of the colorful dishes that have been on the menu, which also includes a bread made from Kernza flour—milled from a perennial wheatgrass—in a recipe perfected by pastry chef Nicola Carey. 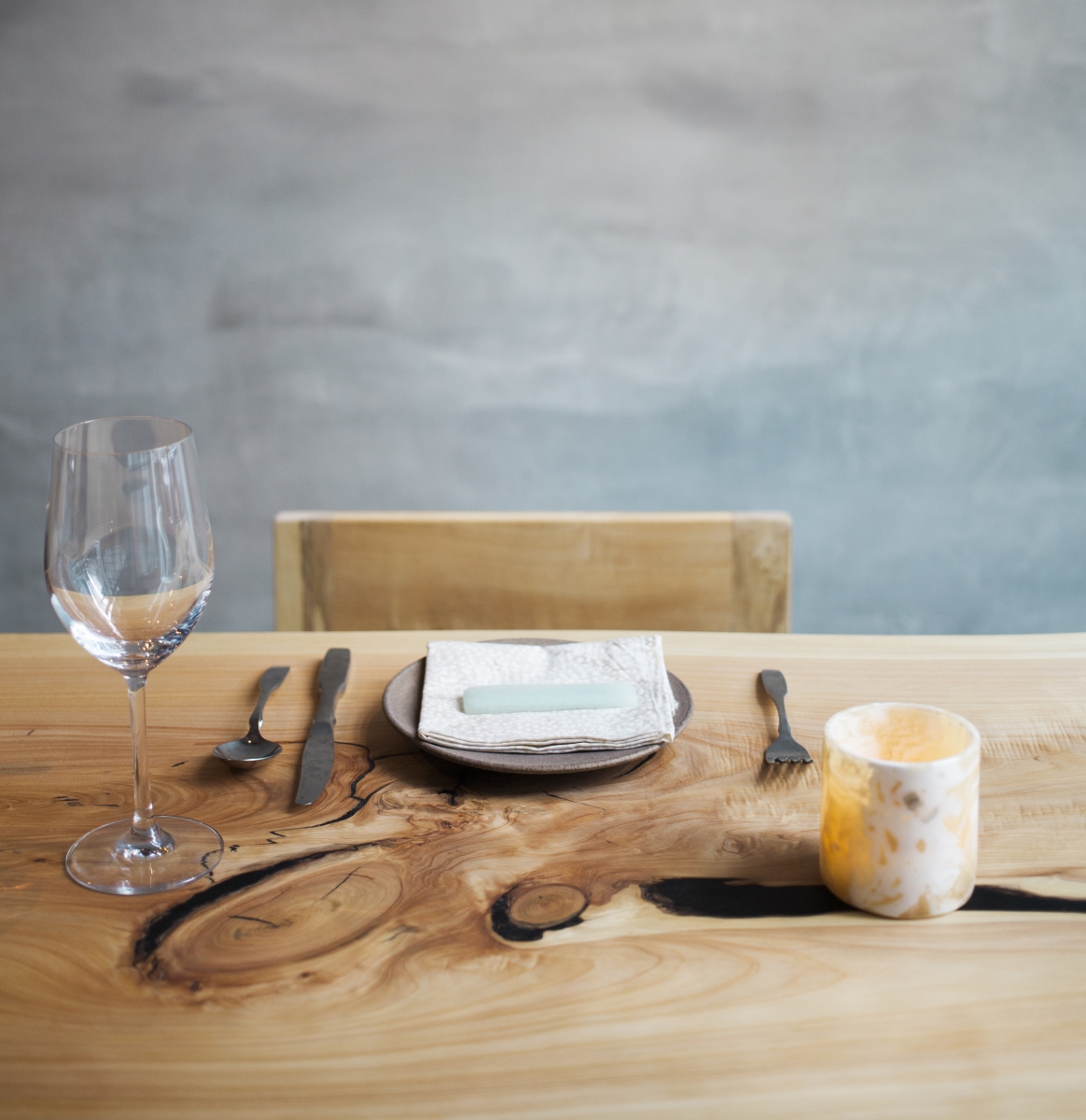 Dishes are served on Mendocino clay tableware from Atelier Dion, accompanied by vintage cutlery, and napkins that will be used as worm fodder once worn out.