This community leader is helping to forge a healthy connection between urban farming and new employment opportunities for Detroit’s youth. 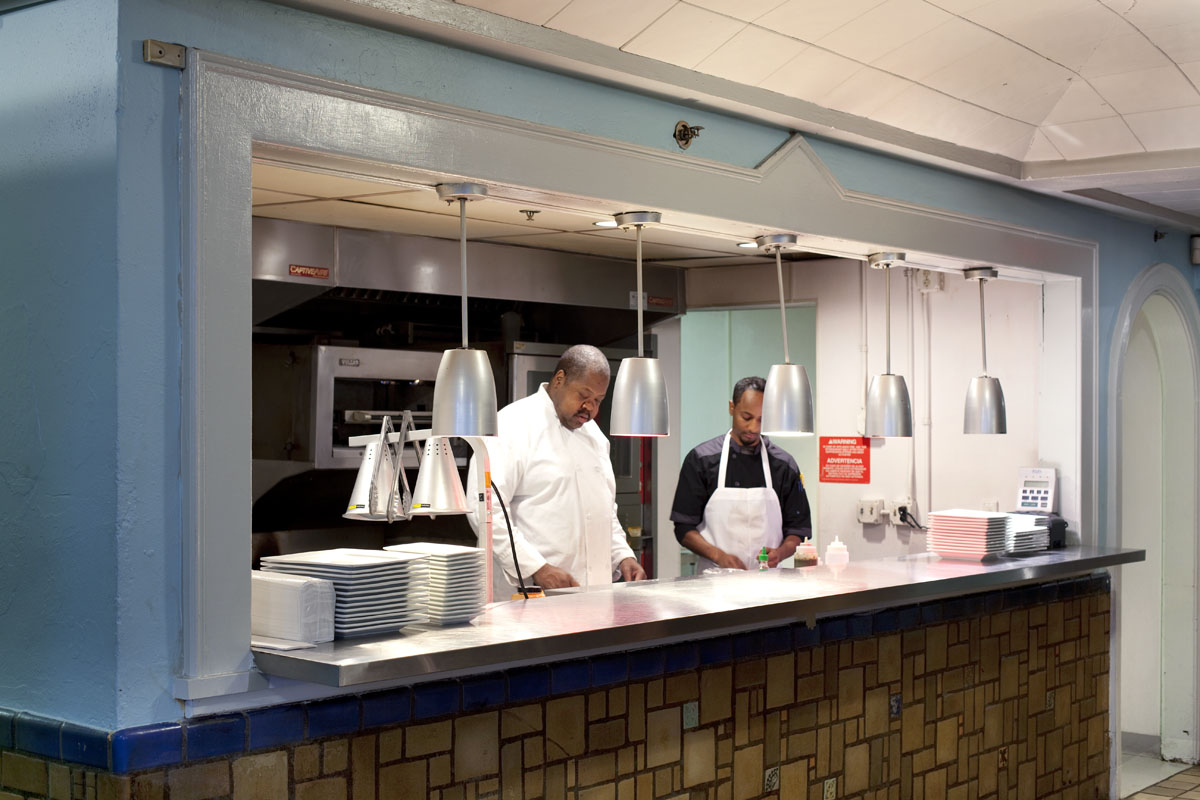 It’s lunchtime at Detroit’s Colors, and chef Phil Jones sits at a desk in a back alcove plugging away at his email. The inbox is ﬁlled with urgent questions related to a half-dozen organizations he chairs and manages, both big and small. “I’m sorry, sir, I hate to interrupt,” says the employee running the cash register, “but we’ve got no ones, no ﬁves, and we’ve only got one dime and two nickels.” Jones has a patient, modest disposition; his employees talk about the feeling of mutual respect they ﬁnd working there. “I’ll run to the bank,” Jones says.

The Colors restaurant serves a grass-fed burger as juicy as any of the nouveau-Brooklyn and Shake Shack–style patties sweeping the globe and a sweet potato wonton mash-up that could easily have been made by Annisa’s Anita Lo. But Colors’s true mission is creating equity in the food service industry, not conquering Iron Chef Loin Battle Sweet Potato. Jones wants to demonstrate how feeding people well and running a successful business need not come at the expense of good wages and a strong community.

“There’s nothing simpler than a burger,” says the 49-year-old Jones, a veteran of the restaurant business who’s spent a lifetime in the industry, “but it becomes sublime when it’s using grass-fed beef that comes from within 150 miles of your location and organic bread baked by Avalon Bakery at Eastern Market. It becomes much more than a burger. It becomes a teaching tool.”

“What we do here,” Jones says, “is create connections for people to move forward.”

Jones grew up selling meat patties on St. Croix as a boy, worked at a neighborhood soul food place as a teenager, and later cooked for Christian catering halls, The Rattlesnake Club, and several high-end hotels. For the past two years he’s been bringing those culinary chops to Colors as a part of a broad program that includes workforce development, cultivating cooperative food business start-ups, and promoting restaurant worker advocacy.

“We’re about developing people, and while it might take a little extra effort, we want to make sure that my knowledge, experience, connections, relationship base is shared with folks,” he says. “How can I  have a good life if my neighbors, my friends, my family don’t have good lives?” 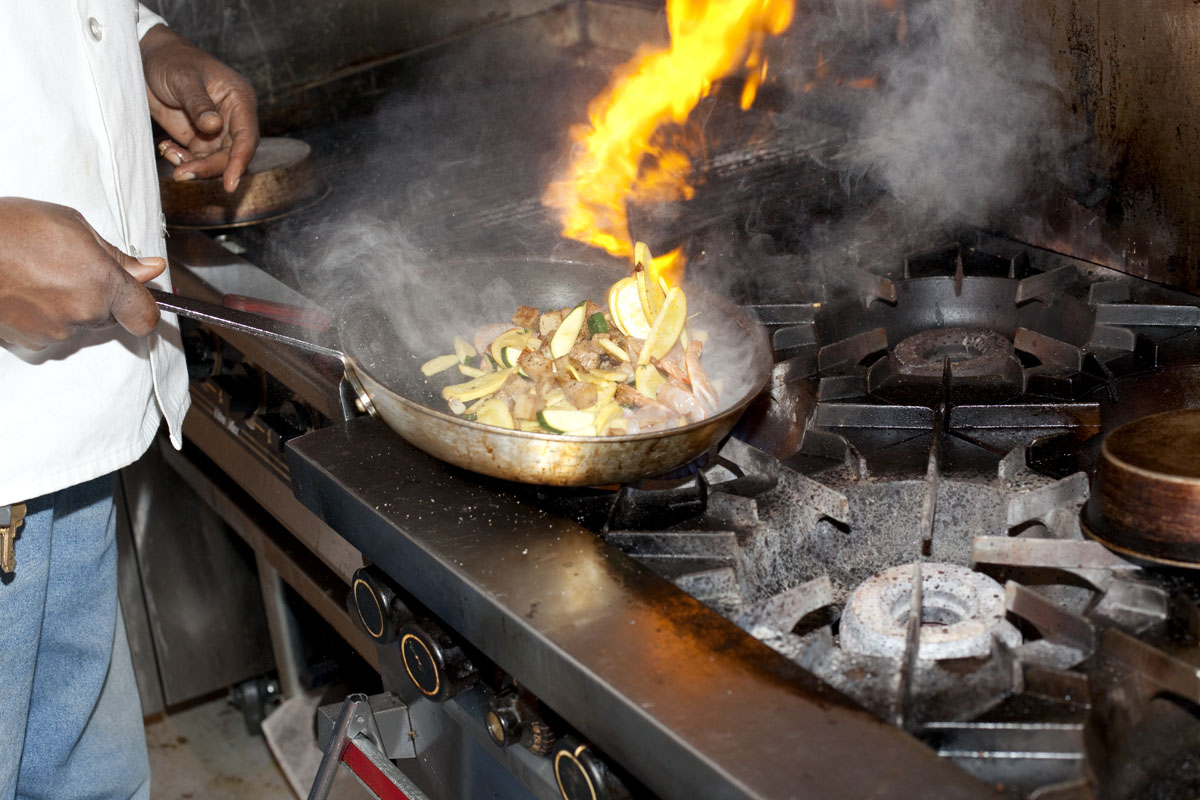 Shrimp hash with farm-raised shrimp from nearby Okemos and potatoes from Eat Local Eat Natural.

Like the original Colors restaurant located in New York City’s Greenwich Village—founded in 2006 by displaced workers from the Windows on the World dining complex atop the World Trade Center’s North Tower —Detroit’s Colors is a cooperatively run business that doubles as the Michigan headquarters for Restaurant Opportunities Center (ROC) United. Minsu Longiaru, coordinator for ROC-Michigan, raised $300,000 in start-up capital for the venture and asked Jones, chair of the Detroit Food Policy Council, to run it.

Colors is located in Harmonie Park, the entertainment and design district in Detroit’s rapidly redeveloping downtown, within sight of the Detroit Opera House, Fox Theatre, the Music Hall Center for the Performing Arts, and the baseball and football stadiums. The laminated recycled wood counters were built by the owner of Slows Bar BQ, a popular joint in Corktown across from the site of the old Tiger Stadium. Its iconic ﬂoor tiles date back to the restaurant’s origins as a 1910s German beer hall. During Prohibition, it became a speakeasy with an underground system of tunnels to convey customers to safety in case of police raids. The building’s second-ﬂoor grand ballroom, another hidden treasure undergoing renovation, has 25-foot arched windows that look out onto the stadiums. 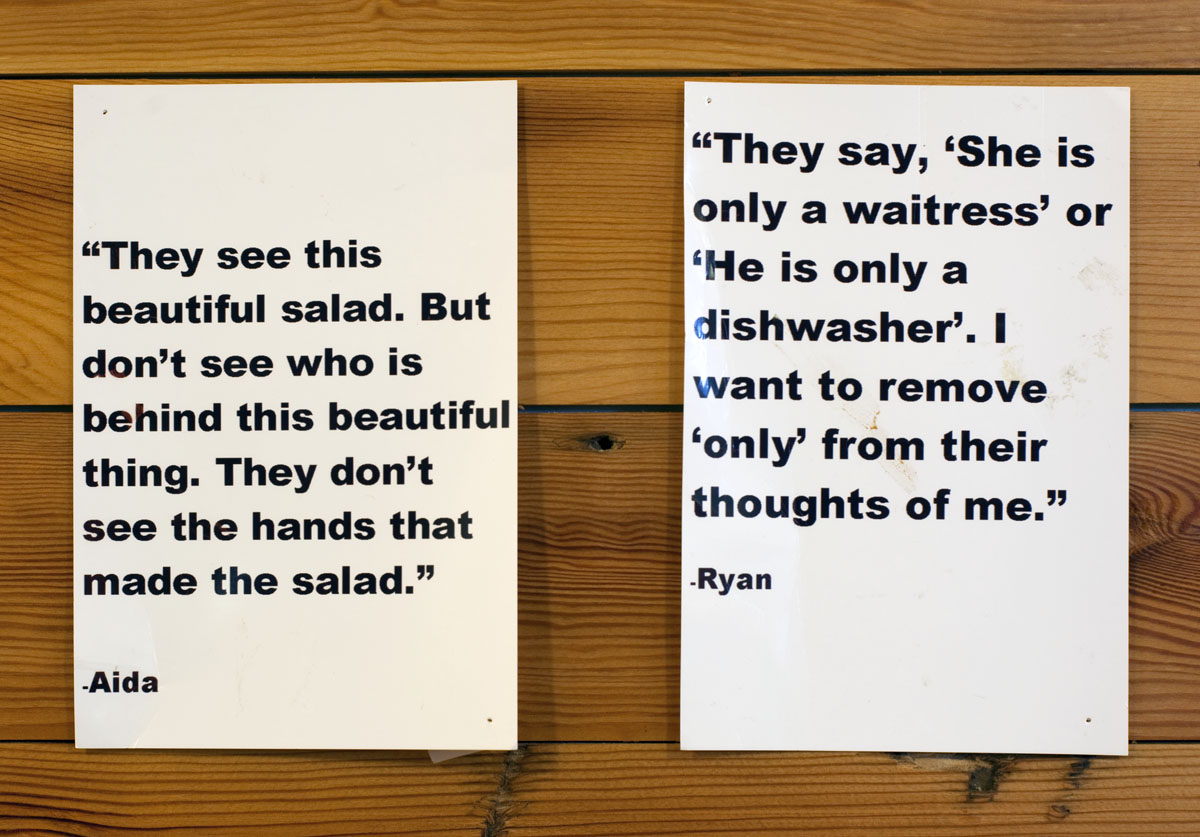 The reclaimed wood tables were built by Colors members.

Dan Kinkead, director of Detroit Future City, the organization in charge of implementing the Detroit Works Project strategic plan, completed early last year, says that Colors plays an important role in the longterm future of the city. “It really moves from the land reutilization idea over to economic growth: this idea of providing job skills to new employees who are unemployed and lack the experience to have gainful employment,” he says. “We recognize that slightly greater than half of our working-age population, 25 to 64, is not part of the active labor force. Getting more Detroiters employed is paramount and, in fact, it’s one of our top ﬁve priorities for the ﬁrst two years of our implementation effort.”

David Hardeman came to Colors after hearing about the program during an employment-readiness class. In July, he was hired directly out of the ten-week program to work at a Jimmy John’s Gourmet Sandwiches. By November he was training to be a manager. Many of  his peers found jobs in a restaurant at Ford Field, the nearby football stadium.

Hardeman says he initially learned about things like minimum temperatures for cooked food and how to serve alcohol, then trained to serve customers and use the cash register system. The biggest thing he learned, he says, was how to handle disagreement. “I voice myself in a manner that’s productive now,” he says. “Before I would just lay down and take it; I wouldn’t even say anything about it. Now I can just take the individual aside and express my concerns.”

A mile east, on Gratiot Avenue, sits Detroit’s hopping farmers’ market, a six-block-long stretch of produce and value-added goods vendors that contains the guts of the city’s rapidly expanding foodie culture. (Popular food blog Eater launched a Detroit edition only ﬁve months ago.) Eastern Market is where Jones picks up ingredients for dishes like his collard greens shooters, a creamy potato-and-collard-greens soup. He gets spices from Rocky Peanut Company, a long-running family business; fresh-baked goods from Avalon International Breads, a pioneer in organic goods since 1997; and artisan sausages and charcuterie from Corridor Sausage Co., established in 2009. “I try to push things that are seasonal and available in abundance,” Jones says. “Right now we’re taking in collard greens. I’m going to take in much more than  a normal place because of our technique that we use to prepare them.” 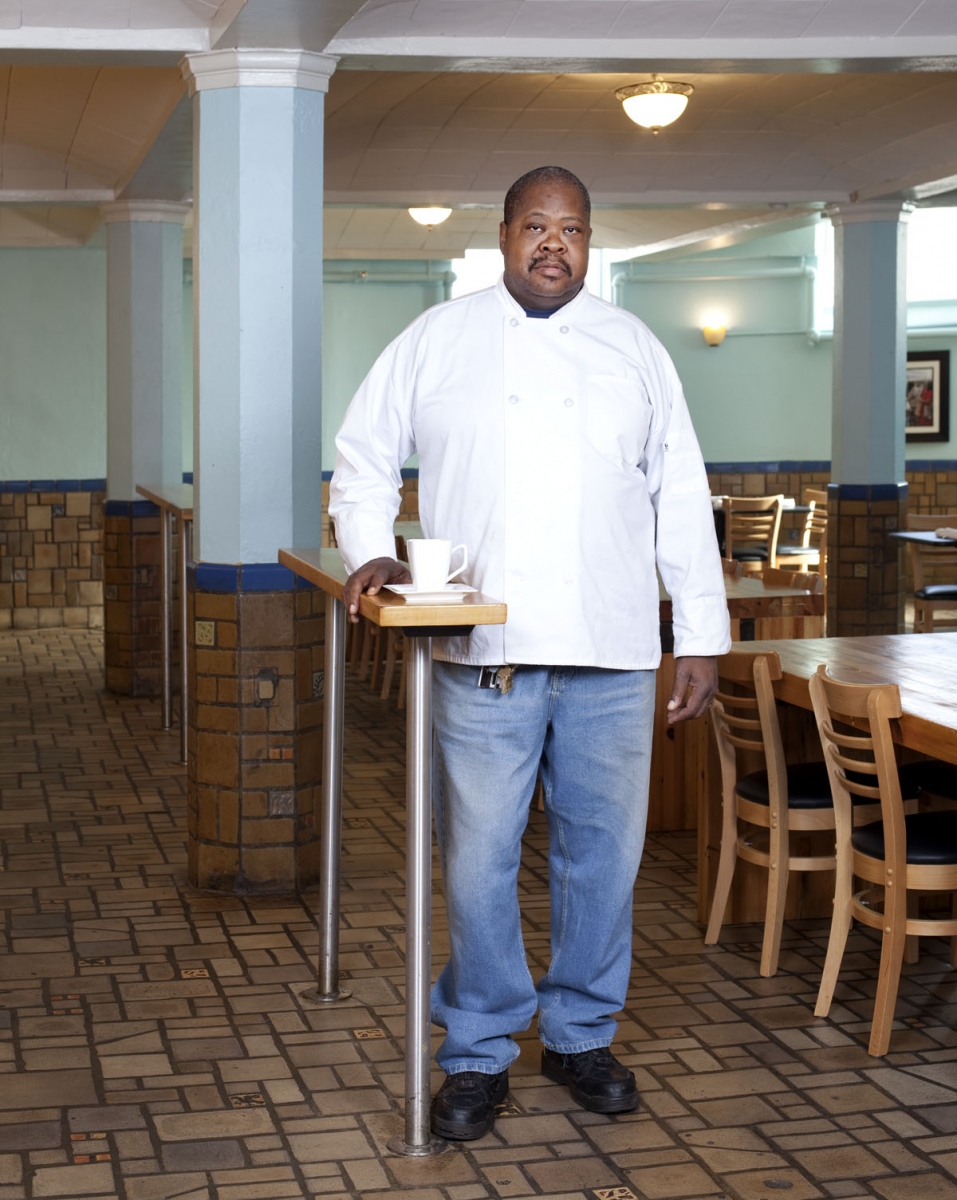 Jones stands in the former German beer hall and speak-easy.

Jones is also a board member of Keep Growing Detroit, which facilitates 1,400 registered gardens in the city and is currently collaborating with him on a community garden. “Supporting local food is a natural extension of what we do,” he says. “Healthy food access is at the core of our values. We’re really connected on a grassroots level. Michigan is second only to California in agricultural diversity, so we’ve got a lot of stuff available to us.”

Microgreens—high-nutrition seedlings that are a growing trend—come rolling in on a bicycle rigged with a baby seat and a toddler chair. A trailer is piled with bins of sprouts from Rising Pheasant, an urban farm a couple miles away on the east side, home to the renowned Heidelberg Project, which turned a two-block area into a public art installation of found materials. Beyond the clichés of abandoned homes and the utopian bonhomie of urban farming, this consistently well-maintained stretch of Farnsworth Avenue is a bit of proof that community-based agriculture can play a vital role in rebuilding neighborhoods.

“Detroit is a city that’s on the verge of being brand new,” says Reverend Bruce Landers, part of the soil cooperative Dirt:Works, one of two teams participating in this year’s Colors Co-op Academy. “Everything is being turned upside down to make it work better.” The Dirt:Works start-up plans to nurture local agriculture by collecting and composting waste, and currently provides consultation and material support to farmers. 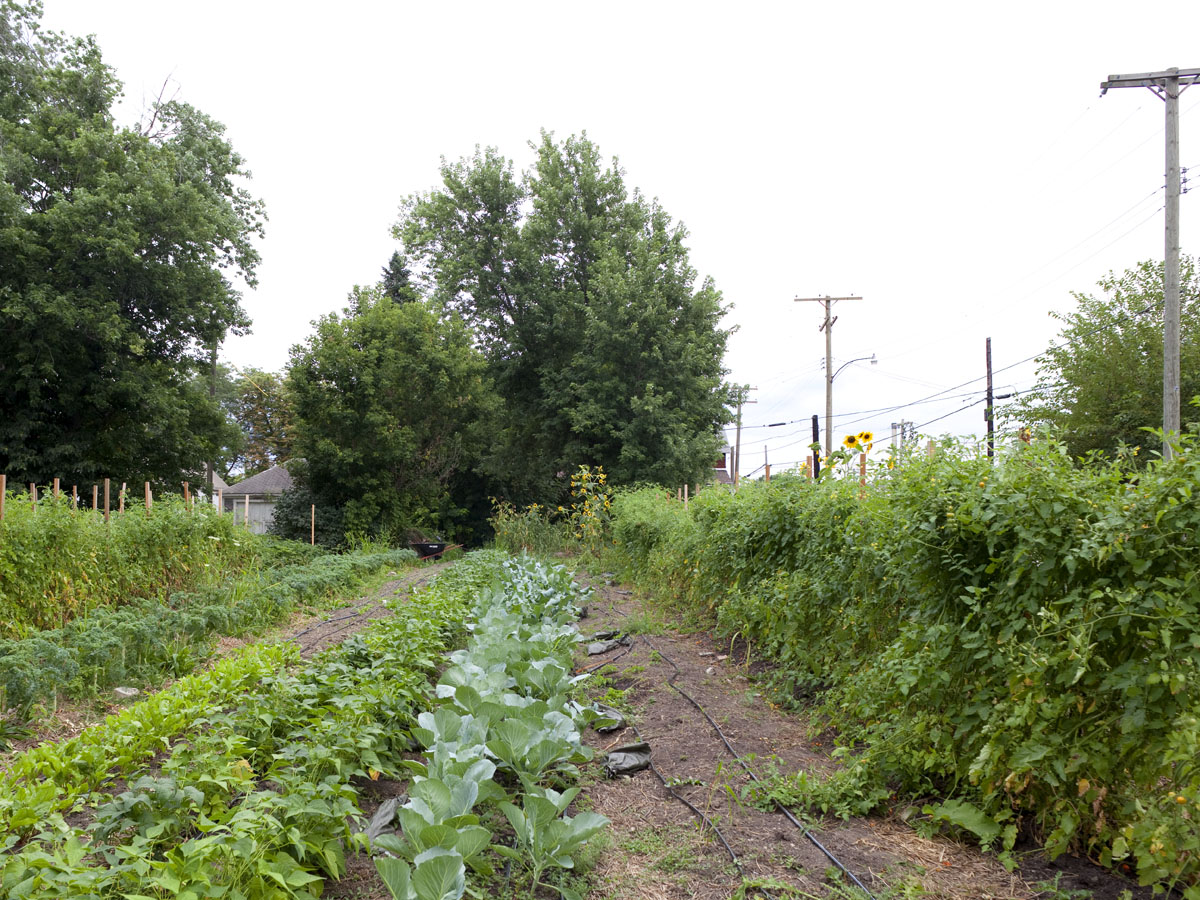 The Co-op Academy is part of the Colors mission of expanding access to opportunity: It trains two to three teams a year in how to run a collaboratively owned business as an alternative to big chains and independent family-run places. “These models have loyalties and alliances to the folks who own them,” Jones says.  With co-ops, he adds, “other folks have an opportunity to grow and build family wealth.”

Through ROC United, Jones also advocates for better wages and working conditions in the food service industry, lobbying Congress to raise the minimum wage to $10.10 an hour and the national tipped minimum wage from $2.13 an hour, unchanged since 1991, to 70 percent of the regular minimum wage.

“Current wages only allow income to go up barely above minimum wage,” Jones says. “They put you in a place where you don’t make enough for assistance but you can’t afford to pay your bills. We hear a lot about a living wage, but a living wage puts you in a place where you’re a ghost. It becomes a survival wage. When you can get above 20 dollars an hour, you can start building family wealth.”

As chair of the Detroit Food Policy Council, Jones is leading the lobbying effort for the City Council to pass the Good Food, Good Jobs Act, an initiative that makes adequate workplace standards and keeping retail stock updated two conditions for renewing liquor licenses. “It would be the nation’s ﬁrst bill linking the liquor license process to a store’s ability to provide quality food and abide by basic workplace standards, in terms of providing sick pay, sick leave, and paying a minimum wage,” says ROC–Michigan organizer Lynn Wiggins. He collaborated on research showing that 92 percent of authorized food stamp retailers are liquor stores and convenience stores, and that 38 percent sell expired food, 22 percent sell expired meat, and 22 percent sell decaying fruits. “People want to talk about blight, crime, and economic development, but what’s more important than the ability for someone to have a fresh meal on a daily basis?”

Only state-appointed emergency manager Kevyn Orr and newly elected Mayor Mike Duggan know what the ﬁscal relationship will be between new Detroit, the exciting space for cultural, land use, and entrepreneurial experimentation, and old Detroit, the bankrupt city. Will implementation of a longterm strategic plan by Detroit Future City allow it to overcome the deﬁcits associated with the historical one? On the ground, it’s a patchwork—a growing collection of hubs of independent cultural activity, alternative spaces, capital investment, and sustainable initiatives that is increasingly being stitched together into a network. Colors is one of the crucial players. “What we do here,” Jones says, “is create connections for people to move forward.”