From the air, a series of flat, gray, industrial looking waterfront piers jut out into the Delaware River in Philadelphia, Pennsylvania. “MetroZepp,” our aerial historic tour blimp, hovers as it suddenly detects the distinct emergence of Design. We crowd to a small window as our captain promises to give us a closer look.   Photo: […]

From the air, a series of flat, gray, industrial looking waterfront piers jut out into the Delaware River in Philadelphia, Pennsylvania. “MetroZepp,” our aerial historic tour blimp, hovers as it suddenly detects the distinct emergence of Design. We crowd to a small window as our captain promises to give us a closer look.

“Ladies and Gentlemen, coming into view another fine example of ‘Applied Intelligence!’ Philadelphia is now poised to realize a grand vision, reconnecting to its waterfront heritage. Pier 11, now known as the Race Street Pier, is among the first river spaces to be re-invented for the new century. Every half mile along the Central Delaware, as part of a new, 30 year Master Plan for the Central Delaware, will be a series of parks engaging with transportation facilities for streetcar/transit, vehicles, bicycles, and pedestrians, promoting walkable communities. All these amenities will link waterfront recreational, cultural, and commercial destinations for all the residents and visitors of Philadelphia – and, essentially, network the piers to each other!”

Karen Thompson, planner and project manager for the Delaware River Waterfront Development Corporation (DRWC), came along for the ride to verify any details. You know how historic blimp tour guides are…nonetheless, Thompson vouched for the accuracy of Captain von Helium’s heartfelt, enthusiastic introduction.

Thompson went on to explain to us that in 2009, Philadelphia mayor Michael Nutter approved the formation of the DRWC to oversee the revitalization of the river. A 30-year master plan was developed by Cooper Robertson, Kieran Timberlake, Olin and others that is pending final approval by the planning commission. “Early action projects,” as she calls the pilot efforts, included Pier 53 and Pier 11 (Race Street) that demonstrated a variety of approaches  (and budgets). Pier 53 took a matter of months and Pier 11 took approximately two years to complete, for example.

The concept though, as Captain von Helium mentioned, is as much a linkage of parks as it is piers. “Not every pier will developed,” Thompson cautioned, since some piers are already built-up with condos. But, I’m stickin’ to my story. Piers are a long-standing feature of river commerce worldwide and the kind of re-thinking that’s going on here is exemplary.

AND NOW, FOR SOMETHING COMPLETELY DIFFERENT

“Weird,” is how a colleague had described the re-design of Pier 11, the new Race Street Pier, when I first mentioned I wanted to go see it. Weird Good or Weird Bad? I had to know…

We gingerly alighted from “MetroZepp” on a rope ladder swinging down to a sunny, boardwalk expanse of diagonally positioned recycled plastic. The fast moving Delaware River swept by us. 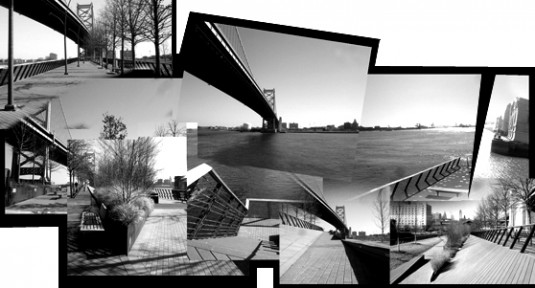 Apparently, the original Pier 11 had a lower level for off-loading shipped goods and an upper, recreation level. The new “Race Street Pier” capitalizes on this same strategy absent the need for shipping and receiving. It successfully expands your sense of time, space and travel, extracting maximum use from the available footprint. Multiple levels, angles and perspectives display a full bag of architectural/landscaping tricks. At this time of year the barren trees give an arid feel to the place that may or may not be the additional effect of the severe geometric design. In other words, judge for yourself when it’s in full bloom. Intentional or not, there are slopes here that would be a skate boarder’s paradise – though a National Park Service official came motoring through at one point so I’m not sure that’s an option.

Upon approach from the main streetside entry, you ascend to a highpoint that then dramatically drops off, by stair, to the lower level. That climb brings you closer and closer to the underside of the steel bridge structure and then, from that promontory, you “dive” to the river view. You catch your breath at the grand gesture and sweep of the river. A straight, level walk to that same outlying point would have been so bland by comparison. It reminds me of the spatial experience of Le Corbusier’s Carpenter Center in Cambridge, Massachusetts. There is something new to discover at every turn – truly satisfying architecture and a fundamental design lesson. 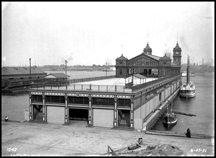 Our atypical focus group for the day was the few other people who braved the pier on an icy morning–three architecture students from Montana State and a mom with a baby and stroller. The mom liked it ok, said it’s a nice place to meet a friend for coffee (bring your own). The students said they were in town to do a school project based in another Philadelphia neighborhood and had stumbled upon the Race Street Pier. One concurred that the site was weird but that he was “attracted to weird places.” Another mentioned that the pier design made a visual connection to the river but not so much a physical one. If you think about it, it’s as if the pier is a long cantilever that isn’t tied back to the structure of the city. It is complete unto itself but more tenuous in relation to the city as a whole.

There is an attempt, for a block or two, to bridge the major highway that harshly separates the city from the river. But, in terms of wayfinding, you would never know of the pier’s existence from, say, William Penn’s Rittenhouse Square in the heart of the city. And why not? Signage and QR codes, for example, could enhance this connection in a way that would not be hard or inordinately expensive to accomplish. 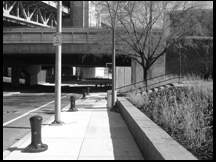 Maritime mooring bollards hint of a connection to the river a block or so away. 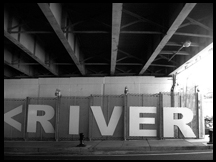 In case you missed the hint…

At last we ascend the ladder into the sardine can cabin of “MetroZepp” and settle in as our moored airship is released upwards. “So?” squeaks Captain Helium good-naturedly, as we float across sunny, Philadelphia skies. “Weird Good!” we chime in unison, clinking champagne glasses and passing the hors d’oeuvres. 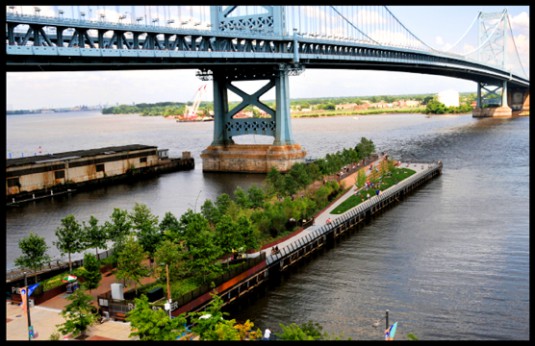